At a group-grope press interview, John Travolta talks about his alien-diva star turn in "Battlefield Earth." 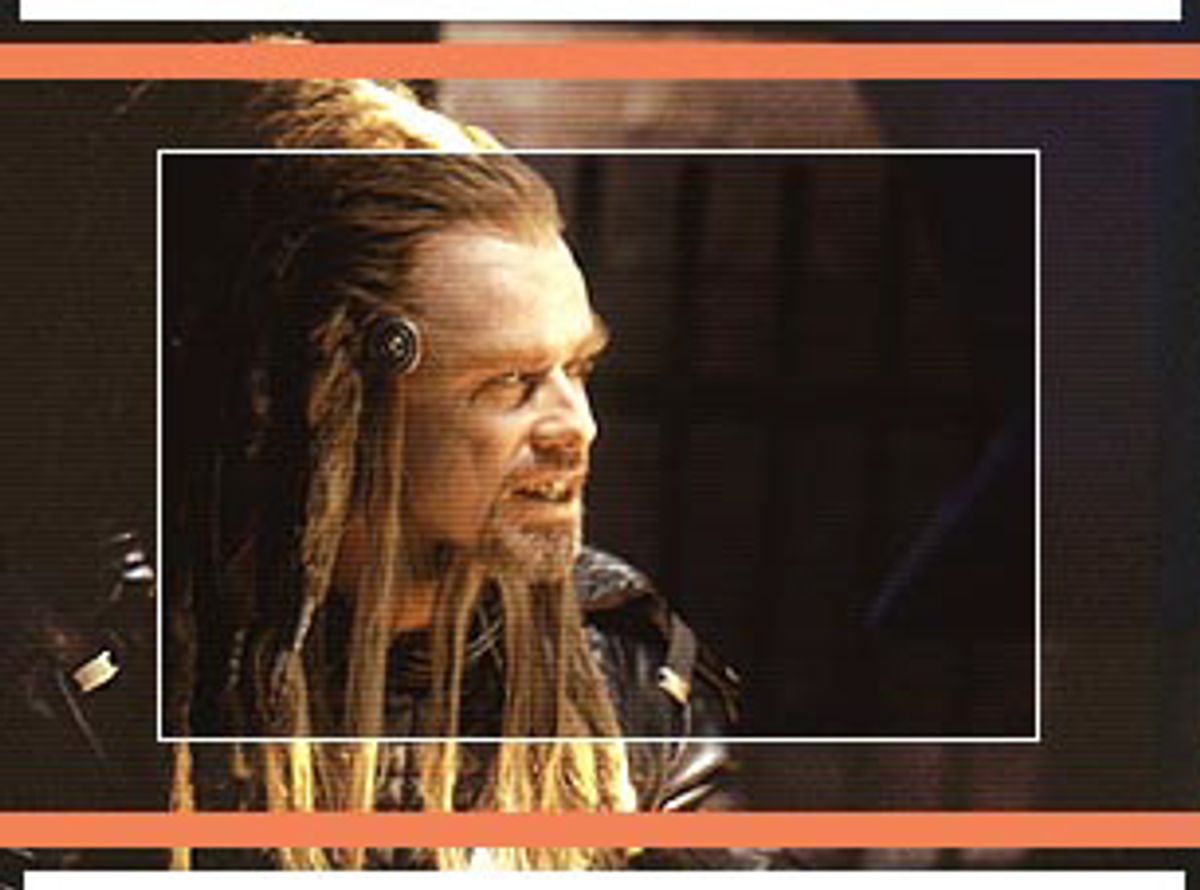 In a different forum, I would like to
have asked what led John Travolta to
play his 9-foot, 572-pound, dreadlocked,
scuz-toothed monster in "Battlefield Earth" as an alien diva. (Ten
minutes into the screening, the guy
sitting next to me asked, "Is he doing
Bette Davis?" "No," I replied,
"Katharine Hepburn.")

In the eardrum-shattering piece of
Manichean bombast that is "Battlefield
Earth," Travolta carries on like a
refugee from the "Outer Limits'" Ivy
League who can't believe that he landed
such a grungy, low-prestige job as chief
security officer on Earth -- and is
nonetheless determined to bring it off
with impeccable hauteur.

Travolta was doubtless patterning
himself on imperious movie villains from
war films and espionage flicks, but what
comes out is more like a New Jersey
boy's playground impression of a New
England snob. Yet in this cushy phase of
his career, when he can carry even a
screeching turkey like "The General's
Daughter" to box-office success,
Travolta operates with the press like an
alien diva himself. He jetted into San
Francisco, where his people arranged 15-
or 20-minute group-grope interviews for
him.

Midway through my session, which
included eight or nine Internet and
radio reporters -- someone asked the
crucial question. He wondered whether
the actor, producer and prime mover for
the film version of L. Ron Hubbard's
sci-fi novel, "Battlefield Earth," was
upset by widespread rumors that the film
would turn out to be propaganda for
Hubbard's Scientology belief
system.

Travolta responded that he found such
advance buzz "funny, because it's so not
what it is. Fortunately there are a lot
of literate people in the world who know
the difference between science fiction
and philosophy, and clearly separate the
two." He said he actually enjoyed some
of the way-out conjectures, especially
the one that the film would contain
"subliminal" messages. "It didn't work
for Pepsi," he quipped.

At the same time, he didn't want to
limit people's perceptions. He called
"Battlefield Earth" an "entertainment
piece," with "no particular message,
other than how big is your popcorn or
your candy bar." But then he said,
"That's what good movies do, they
provoke thinking of some sort," and
compared the questions audiences might
have after seeing "Battlefield Earth" to
those they had when they wondered what
was in the briefcase or under Ving
Rhames' Band-Aid in "Pulp Fiction."

In my personal minute in Travolta's
spotlight, I asked whether he'd worked
on the script for "Battlefield Earth."
He said he didn't need to.
"[Screenwriter] Corey Mandell loved this
book -- we finally found the right
writer. He really adapted it well. All
the great points of the book he got
down. I don't think I altered anything
of his. That for me is completely
unusual. I'm [usually] like, 'Oh, he
wouldn't say this ...' I'm like all over
it. In this particular case, I wasn't;
it was like, 'Oh, this is great.'"

Was it fun, I ventured, playing the most
educated character of his career? "He's
educated in his own mind; he's a legend
in his own mind," he said. "I love when
he's at the table with his senior
[officer] and he's like, 'Aren't you
aware of my academic achievements?' He's
so full of himself it's just delicious."

And did his experience in Hollywood make
him enjoy the concept of his alien
character always trying to gain some
kind of dirty political "leverage?"
"[That applies to] Hollywood, Washington
-- that's why I think it's so much fun,
it's so identifiable. The whole leverage
background was hilarious."

As he shook hands with everyone and
flashed a flood-lamp smile on each
questioner, you got a sense of the
piercing sweetness that first made
Travolta a star. He was genuinely
thrilled that the packed house the night
before had given this film hearty
applause. (Of course, it had also
cheered for Hubbard.) After breaking the
ice, there was little time to do
anything more than churn up the
shallows.

A Travolta fan since "Carrie" and TV's
"The Boy in the Plastic Bubble" (both
1976) and "Saturday Night Fever" (1977),
I worried that this now-beefy,
always-beaming baby boomer, who hasn't
given a great performance since "Get
Shorty" six years ago, had fallen into
the same syndrome that plagued him in
the early '80s, when he said, "I got fat
on success." Some actors, like Orson
Welles, come into their own as
performers when they let everything hang
out. But with the bulkier Travolta, as
with the even bulkier Gerard Depardieu,
I think an air of self-indulgence gets
between the audience and the robust
sensitivity that used to be his gift.

You couldn't conceive of "Saturday Night
Fever" without Travolta, and he was the
heart and soul of Brian De Palma's
masterpiece, "Blow Out." His career,
like De Palma's, might have been richer
if "Blow Out" had been a hit. He relaxed
into the role of a limited technician
with unlimited feelings and found more
screen depth than at any time before or
since. By contrast, his comeback role as
a hit man in "Pulp Fiction" had an aura
of camp, and the joke behind his
sensational turn in "Get Shorty" was
that he played a hit man like a movie
star.

Maybe at this stage in his life
and career, it's easier for him to draw
on movie-bred experience. He did
respectable but dull work in "A Civil Action," and from
"Broken Arrow" to "Battlefield Earth,"
he's gone further and further into
absurd stylization. All you can say
about his performance here is that it
gives the movie the only oomph it has.

Yet Travolta said he's tickled to the
bone by "Battlefield Earth," both as an
actor and a producer. "It was like four
hours of makeup," he told us. "The
process of it wasn't bad, it was after
-- the claustrophobia and the heat of
it. But every little trick added to my
potential evilness, so it was fun on a
certain level."

He grooved on his vaguely Rasta-esque
get-up and amber eyes and the extra
talon on one of his hands. "The teeth I
added -- you know, they drink this
kerbango drink, so I said, 'These
teeth should be funky, because they're
buzzed all day on this drink.' We're all
coffee drinkers and iced-tea drinkers, we
all get bad teeth; I'm sure
kerbango messes with their teeth.
I said, 'Bring it on.'"

On his own Travolta scale of comic-book
villainy, he said "Pulp Fiction" was
"more subtle," "Broken Arrow" was the
start of his "new theatricality" and "Face/Off," his
huge hit for John Woo (who'd also done
"Broken Arrow"), "went over the top."
"Battlefield Earth," he said, went over
the top of over the top: "The get-up
invited me to have a blast, to get
Shakespearean, almost. The dialogue I
love. Every day, I couldn't wait, it was
delicious to me to say those words:
'Well, I can see someone like you, being
old and having no future.' Remember, to
the man with the double-chin? It's just
delicious. Or when he's at the bar and
the bartender doesn't want to be
blackmailed, and he says, 'You better
start thinking about it. I'm not your
friend!'"

If those lines don't particularly
resonate on the page -- well, they don't
in the movie, either. For an actor,
believing in your material no matter how
lowly can be a plus. But when that actor
becomes a producer-star and tries to
impose his own literary standards, one
can see it scaring away potential
heavyweight collaborators. A sci-fi fan
asked why, if Scientology had nothing to
do with the making of the film, Travolta
didn't get behind a bona fide sci-fi
classic like Alfred Bester's "The
Demolished Man" or Robert Heinlein's
"Stranger in a Strange
Land."

"'Stranger in a Strange Land' I would
like to do," Travolta said. "People for
years told me that it should be done.
The reason this was easier was because
a) I was very popular playing a villain
and b) it's such a big book recently -- 6
million copies sold worldwide. And it's
more along the 'Star Wars' style of
special effects, so I think it was an
easier task than 'Strangers in a Strange
Land.'"

Travolta said that he has been trying to
make the film for 18 years -- but that
he originally had the idea of playing
the hero. "I got long in the tooth,
teeth got dirty, I got heavier," he said
with a smile. "I do think that a younger
guy -- [the hero] was kind of written
for that, it was righter for Barry
Pepper. And interestingly enough, the
timing made it work because with all
these other villain parts I played, it
seemed like a perfect challenge to do a
new kind of villain."

With the movie's blend of computer
graphics imagery, miniatures and
full-scale props, "The technology caught
up with this book in a way. I don't
think 15-20 years ago there would have
been the same possibilities." Travolta
said that he's nurturing no other dream
projects.

"After 'Pulp Fiction,'" he
explained, "there was all this brouhaha
about my performance there, and it had
been almost 20 years since 'Saturday
Night Fever,' and I thought, 'All right,
what do I do next. People are so excited
about my performance, what do I do
next?' And then suddenly scripts fell in
front of me that I hadn't had before,
like 'Get Shorty,' 'Broken Arrow,'
'Michael,' 'Face/Off,' 'Primary Colors,' 'Civil Action.'
I never dreamed of playing those kinds
of parts, I just knew I could."

And Travolta said he has no master plan
for his career, beyond extending it as long
as he can. "I don't ever think there's
that day when you say, 'Oh, that's it.'
I think age-wise there might be. I think
Jimmy Cagney, after 'One, Two, Three,'
he just said, 'OK, I'm 61, that's it.'
Pilots retire. Would I retire? I don't
know if I'd be capable of doing that. I
like performing too much."