Bambi meets Godzilla: Disney goes for the goo in a by-turns gory and sappy new epic of computer-generated images. 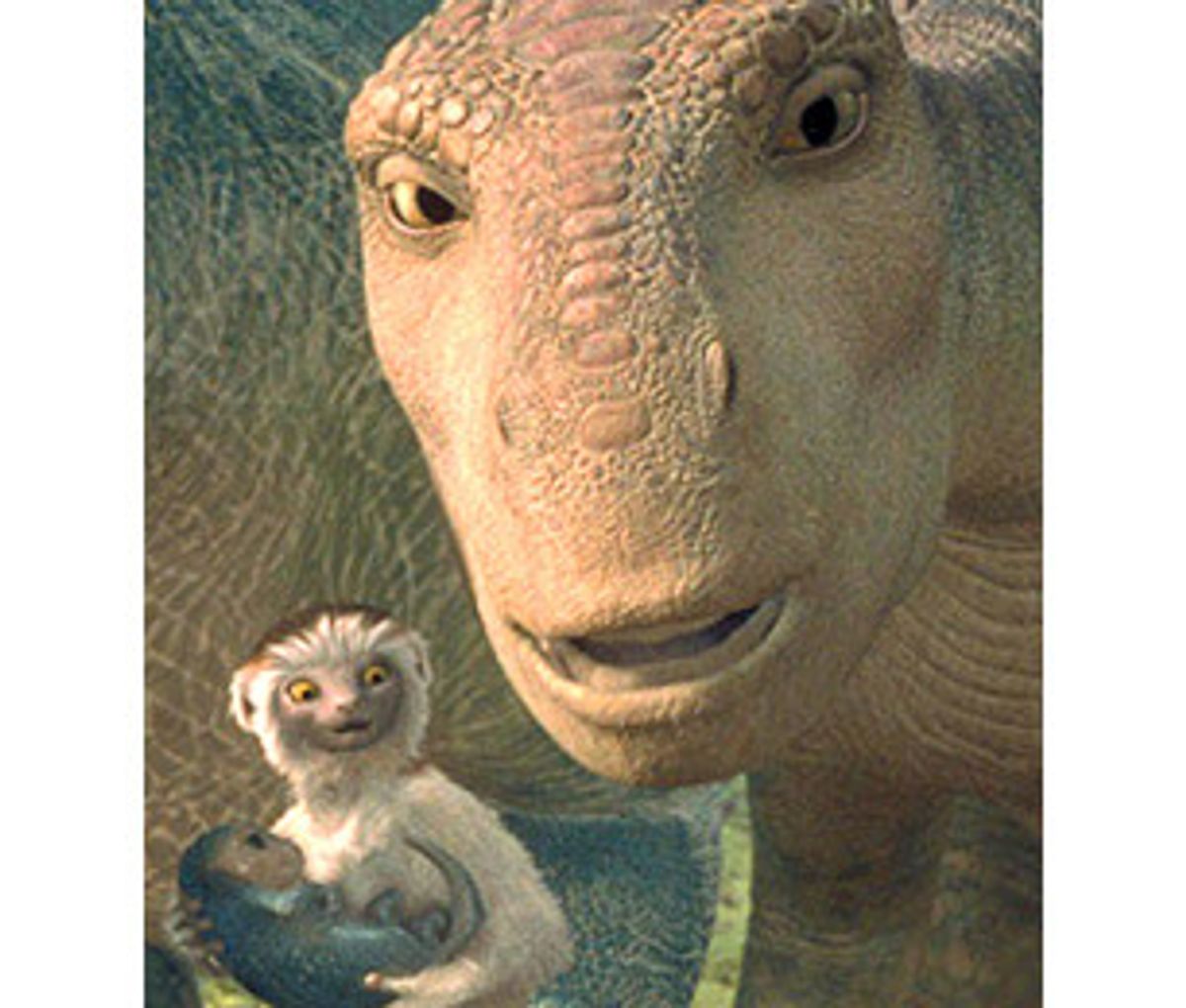 Remember the lightning-swift cartoon short "Bambi Meets Godzilla" (1969), in which the adorable fawn barely gets a chance to bat eyes at the big lizard before meeting with a swift and ruthless death? Well, "Bambi" meets "Godzilla" again in the new computer-cartoon epic "Dinosaur," but the results aren't so witty. Disney's animators use the "Bambi" prototype -- an animal orphan fighting natural catastrophe and hunters -- and apply it to the tale of a dinosaur, an iguanadon, who rises from foundling to messiah. He leads the reptilian survivors of a horrific meteor assault -- as well as an adopted family of lovable lemurs -- to salvation and a life based (I kid you not) on good works and charity.

The Disney filmmakers blend sap and melodrama, but not in the sardonic manner of "Bambi Meets Godzilla" nor even in the deft show-biz mode of latter-day Disney favorites. The hero's name is Aladar (he's voiced by D.B. Sweeney), but this movie is no "Aladdin." I assume the biggest laughs will come from the wisecracks in the theater, when tougher kids drawn to the film's bone-crushing spectacle will start recycling elephant jokes: "What's that brown stuff between the dinosaurs' toes?" "Slow lemurs."

At its best, Disney animation in any era has triumphed by putting the joy of movement into storytelling. But "Dinosaur" has little story at all, and what's there is bare-bones and static -- you might say fossilized. This film isn't cut-to-the-chase: It's cut-to-the-trek. The good stuff comes right at the beginning, with our introduction to the film's main villains, the flesh-eating carnotaurs. One of these gargantuan beasts, with reddish skin and devilish horns, chews up Aladar's iguanadon mommy while he's still in the egg. Diverse scaly creatures, including fleet-footed and peculiar reptile poultry, play hot potato with the orphaned ovum until a Pteranodon drops it onto Lemur Island. Aladar looks cute when the egg cracks open, but lemur grandpa Yar (Ossie Davis) still wants to smash him -- until lemur mama Plio (Alfre Woodard) protests. Instantaneously, family feeling overcomes everyone, including crusty old Yar.

The movie jumps ahead to a grown Aladar frolicking with his lemur cousins before these mammals match off in a courtship ritual. With the sexual sadism of a slasher movie, fireballs from a cataclysmic meteor shower dispatch any young lemur who successfully mates. Aladar and his adopted mom and granddad make it to the mainland only with the misfit Zini and the youngster Suri.

Once Aladar meets up with a multibreed herd of herbivores trying to outstrip lurking 'raptors and Carnotaurs and get to the happy nesting ground -- a land of water and grass, if not milk and honey -- his fate becomes clear. Not only will he demonstrate that even a nice dinosaur can make carnitas out of carnotaurs, but he will also bring the Judeo-Christian tradition into the dinosaur worldview and win all the herbivores away from the cruel Darwinian fatalism of the bullying herd chief Kron (Samuel E. Wright).

Yes, this is one dinosaur movie that a creationist can love. Natural selection be damned! Together with Yar, Plio, Zini and Suri, and two elderly pals, an 80-foot-long brachiosaur named Baylene (Joan Plowright) and a plodding styrachosaur named Ema (Della Reese), Aladar sets out to prove the meek shall be first, every life is sacred and team sacrifice defeats brute force. Aladar eventually converts Kron's lieutenant, the aptly named Bruton (Owen Klatte), to his new way, and wins the love of Kron's own sister, Neera (Julianna Margulies).

For all I know, this story may reflect the deepest spiritual beliefs of directors Ralph Zondag and Eric Leighton and writers John Harrison and Robert Nelson Jacobs and the entire Walt Disney Pictures team. But it has so many echoes of previous Disney cartoons, especially the wilderness extravaganzas -- "Bambi," "The Jungle Book," "The Lion King" and "Tarzan" -- it registers as a hollow audiovisual remix. (If Disney has to keep remaking the same picture, why couldn't it be "Pinocchio"?) And Reese's Ema drawls her lines like a plantation figure from "Song of the South:" When she talks about "birthin' babies" she quotes Butterfly McQueen. As she holds up the tail end of the herd, you half expect her to exclaim (` la Amos and Andy) "Feets don't fail me now!"

In practice, the narrative is only a machine to elicit the maximum number of "ooohs" and "ahhhhs" per minute -- though in this movie we're talking "awws" and "owws." The sight of the baby Aladar is designed to provoke more sighs than you'd hear in an obstetrics ward on New Year's Day. This is juxtaposed with the crumple and crunch of battered reptile bodies. The graphic violence of dinosaur combat is meant to be a breakthrough for a Disney animated feature. But sentimentality and cruelty have always been flip sides in popular entertainment. It's easier to push the unearned emotion that is sentimentality when savages are threatening to slaughter family and friends. The carnotaurs are Satanic in their non-stop attack mode. What makes the combination of suds and blood so hard to stomach here is the action's mechanical way of flopping from jaw-and-claw clobberings to stupid slapstick and kitschy-coo wooing and cuddling.

To my eye, the most intriguing credit on "Dinosaur" is "Story by Walon Green." Green was the co-writer of Sam Peckinpah's "The Wild Bunch" and Tony Richardson's "The Border" and has worked on cutting-edge TV series like "NYPD Blue" and "Law and Order"; he also made the apocalyptic insect documentary "The Hellstrom Chronicle." His credit reminded me that in 1988, long before the top-credited team of directors and writers signed on to this movie, director Paul Verhoeven and special-effects whiz Phil Tippett (who teamed up later on "Starship Troopers") had been trying to launch a film from Green's script for Disney. The movie Verhoeven once envisioned included most of the elements of "Dinosaur," including a friendship between small mammals and dinosaurs, and a meteor-spawned conflagration. When I spoke to him a couple of years ago, Verhoeven described a film that would have been "grim, not completely 'entertaining,' with philosophical battles between good and bad."

A fluky director like Verhoeven might have pulled that off, particularly in collaboration with Tippett, who has a knack for bringing personality to even the most bloodcurdling critters, like the fiery behemoths in "Dragonslayer" and "Dragonheart." (It's doubtful, though, that Tippett, Verhoeven and Green would have had their creations speak English and put each other down in sitcom slang, as when Neera calls Aladar "a jerkosaurus.") Despite the hundreds of millions of dollars that Disney spent to build its own computer-animation studio and create its Mesozoic menagerie, "Dinosaur" has the soulless slickness of a made-to-order operation.

The ultimate failure of "Dinosaur" is the dinosaurs. Sure, this movie proves that computer animation is now at the point where it can simulate skin and hair and plop hordes of digital creations into photorealistic settings. But without an imaginative impulse at the core, the result is like a plush kinetic diorama. The gekko gemutlichkeit of the story isn't as far-fetched as it might have seemed a decade ago: Ever since "Jurassic Park," newsweeklies have inundated us with stories about how dinosaurs were quick and warmblooded, not slow and cold, and that even the fiercest among them were surprisingly familial.

But watching this painfully uninspired product, you have to assume that the only creative spark was to represent species never seen before on-screen. The computer-calibrated accuracy does nothing for the whimsy, or vice versa. Indeed, you may leave wondering, Why is the media in such a frenzy over computer-graphics imagery? In the hands of master farceurs like John Lasseter and friends, in the "Toy Story" films and "A Bug's Life," CGI can be wondrous. Here it's either just proficient or, in the case of the lemurs, embarrassing. Yar scrunches his face up like Walter Brennan in "The Real McCoys" and the younger lemurs are like weird youths or elves out of Middle European puppetoons.

Marianne Moore described poetry as putting real toads in imaginary gardens. Theoretically, the reverse should be poetic, too: With its composite images of CGI creations and photographic landscapes, the Disney team has tried to put imaginary toads in real gardens. (When Aladar broke through to the nesting ground, I thought: "Oh, he's discovered Hawaii.") But there isn't any poetic friction, because the fantastic creatures are simply fleshed-out paleontology.

While watching the souped-up Golden Book reptiles of this movie, I realized I'd rather be seeing any of Ray Harryhausen's stop-motion monsters, the glacially creepy dragon in Fritz Lang's "Die Nibelungen" -- hell, even the guy in the rubber suit in the original "Godzilla." In its combination of enormous hype and feeble follow-through, "Dinosaur" may turn out to be the summer 2000 equivalent of summer 1998's "Godzilla." The slogan for that movie was "Size matters." When will our big-studio epic-makers learn that even in phallic family spectacles, imagination matters more?