"American Moderns: Bohemian New York and the Creation of a New Century" by Christine Stansell 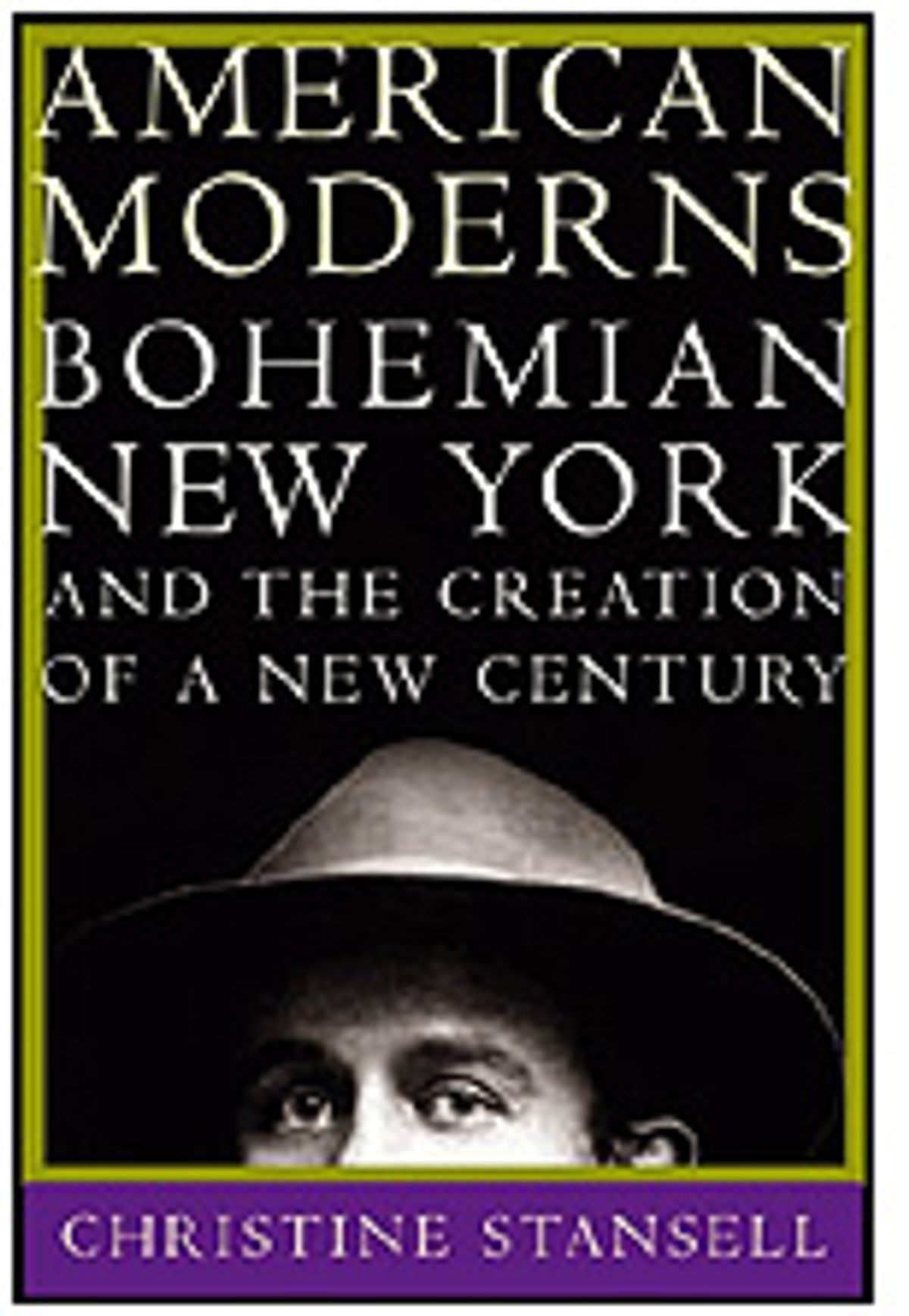 Pity the lapsed bohemian, wanted for so many crimes. Duplicity! Greed! Selling out!

In his new book, "Bobos in Paradise," author David Brooks breaks out a coinage -- Bobo, where "BOhemian" meets "BOurgeois" -- to argue that America's ruling class is now made up of defiant '60s idealists grown older, richer and less radical. His book's a scold: The Bobos, according to Brooks, have built their lives on opportunism, compromises and ideological legerdemain.

To parry this charge requires another big book about bygone bohemia, this one set 100 years ago: Christine Stansell's "American Moderns: Bohemian New York and the Creation of a New Century." Stansell rescues the notion of bohemia from its would-be debunkers, those skeptics who have, for half a century, found implausible the notion of a place whose residents live artfully and on principle. But she does so without seeming to be on a crusade: Stansell, a feminist historian at Princeton, writes narrative history, not polemic.

She acknowledges instances of hypocrisy among the footloose and the ragtag, but she also argues persuasively that bohemian life has always been a step toward the middle class. "Bohemia's self-designated types always existed in symbiotic relation to bourgeois culture rather than in opposition to it," as she puts it. "While bohemias signaled dissent from the profiteering of the cultural marketplace, they also provided their affiliates the means to parlay that dissent into successful careers." Stansell's comfort with this paradox of bohemian culture -- a paradox that, year after year, makes both left- and right-wing pundits' blood boil -- might even incite readers to wonder why the bohemian fantasy regularly invites so much sadistic dissection.

Rolling out her subject in miniprofiles of picturesque artists and radicals (Emma Goldman, John Reed, Neith Boyce, Mabel Dodge, Floyd Dell), Stansell evokes the scene that sprang up in downtown New York when 19th century immigrants attempted to construct, episodically and haphazardly, a Paris-style cafe culture. At the time, alcohol was clubby, remote and expensive; coffee and tea were more democratic, and the displaced Europeans who initially gathered at the coffeehouses were eclectic, unaffiliated and largely down at heel.

Soon, students, journalists, organizers and socialites showed up -- for politics or art, for reasons good and evil -- to inspect the foreigners. These interlopers scoffed at 19th century squeamishness about class mixing. With their growing passion for urban "contact" (a shibboleth in Walt Whitman's populist poetry, which they read avidly), they saw slumming as redemption rather than corruption.

Discussions of free love, feminism, abstract painting, naturalism in fiction, trade unionism and radical politics flourished among the caffeinated polyglots. The years between 1890 and 1919 thus saw the evolution of Greenwich Village. Its cafes, salons, private homes and clubs provided a social infrastructure for women looking to delay or renounce marriage and men looking to delay or renounce making a living.

Not every New Yorker got to savor the spiciness of life downtown. In spite of bohemia's claims of inclusiveness, Stansell shows, women and African-Americans often couldn't transcend mascot status. She's less forthcoming, however, on bohemia's other contradictions. The ad hoc alliance between collectivist politics and individualist art, between union organizers and free-loving art-world nudists, represents an unlikely coupling that some -- Richard Rorty comes to mind -- have blamed for leaving a schizo legacy for the American left. Can you lavishly express yourself and, at the same time, march in unison with a political movement? Stansell spends little time on this crucial question; art and politics are, to her, simply alternative modes of expression available to hearty souls.

In its many redemption fables, "American Moderns" occasionally strikes a note of jubilation, leaving no doubt that Stansell, whose last book, "City of Women," was about antebellum New York, is an "I love NY" historian. If you love New York too, the satisfactions of this book may resemble self-satisfactions. Even if you don't, vicariously snubbing the Victorians is always enjoyable. In Stansell's telling, America's first bohemia was a splendid and efficient racket: It kept its adherents hopeful in straitened circumstances, made their lives feel significant and ultimately made bourgeois citizens out of them.