If you sprinkle when you tinkle, cut it out! 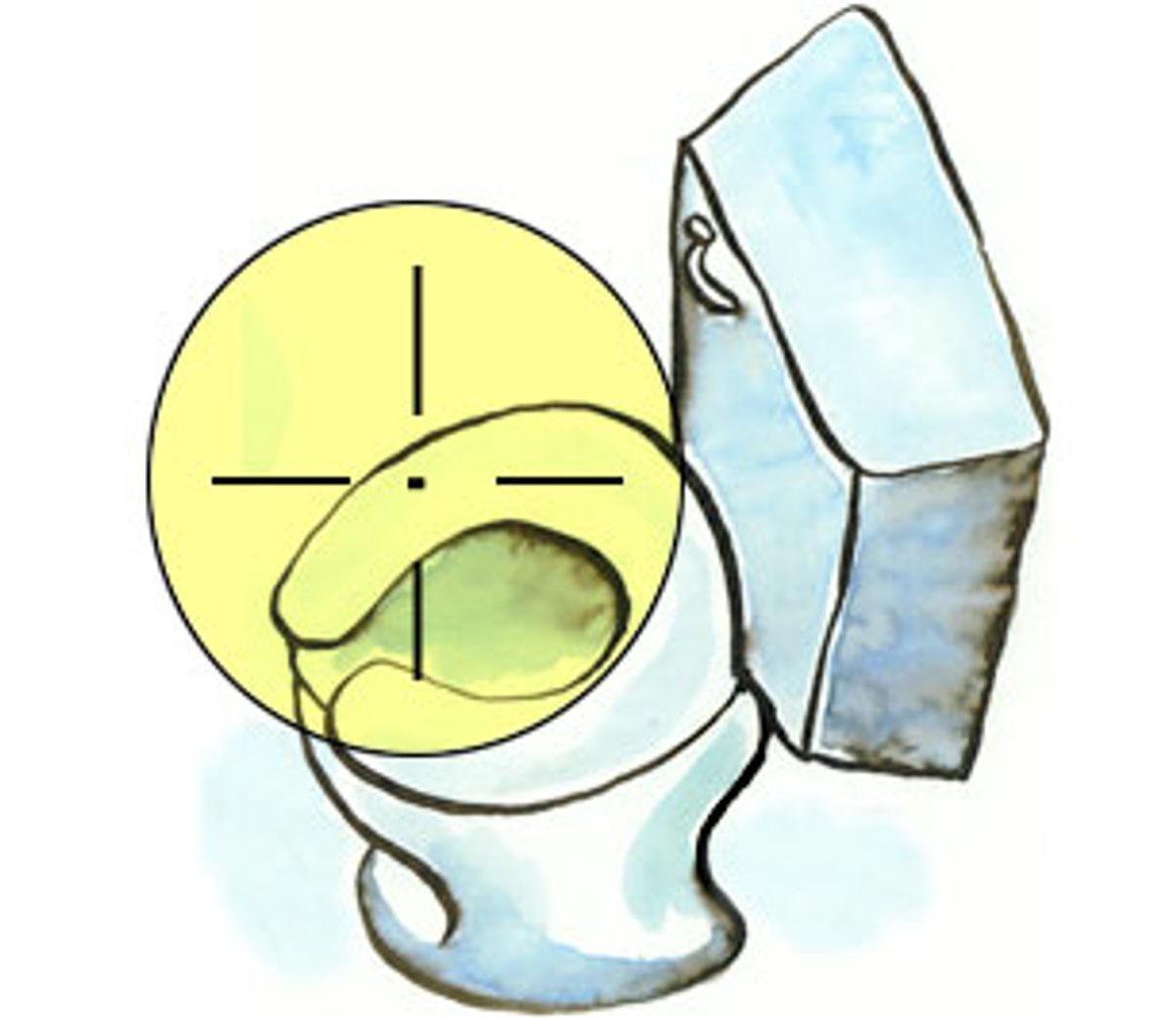 Let's say you are afraid of contracting VD from a toilet seat. You are misinformed, but we'll get to that later. What do you do? You use a disposable toilet seat cover. There. Perfect. All is good with the world.

But all is not good with the world. In maybe a third of the stalls in women's rest rooms these days (according to my desultory research), the toilet seat is liberally puddled with piss. Somewhere along the line, germ-phobic women began crouching above the toilet seat rather than sitting on a paper seat cover. Women have begun peeing like men, but they lack the courtesy to put up the seat. And since women cannot aim like men -- they have nothing to aim with -- a good many of them end up hosing urine on the seat. Very few, it would seem, bother to wipe it up.

Now when the rest of us come along and want to use this toilet, a seat cover is no longer an option, for it will soak through, forcing us to sit down on paper sopped in someone else's excretions. So we are forced to either wipe up said excretions, or stand ourselves.

"It's a lovely thought," says Alan Copperman, director of reproductive endocrinology at Mount Sinai Medical Center, "but it doesn't happen."

To be absolutely certain, I called the American Social Health Association -- "social health" being a euphemism for sexually transmitted diseases (STD) -- to see what they had to say on the topic. I had been referred to them by an editor at Self magazine, which recently ran a piece advocating crouching above the toilet seat to avoid contracting trichomoniasis, a common bacterial vaginal infection. (Thank you, Self magazine!) But neither ASHA nor the CDC's STD hotline said they knew of any study documenting the transmission of trich in this manner. They said it might be possible to catch trich from sharing the wet towel or bathing suit of someone who's infected, but not from sitting on a toilet seat.

I then did a search on Medline using the key words "toilet seat." The search turned up nothing on trich, but it did uncover a study by a University of Arizona microbiologist named Chuck Gerba. I know Chuck Gerba from a story I did years ago. Gerba is the all-knowing god of bathroom and kitchen germs.

Chuck Gerba can tell you the number of bacteria in the average human stool (3 trillion), the average number of toilet paper squares used by American women (7 sheets), the average amount of fecal material in the brown streaks in a pair of men's underwear (a tenth of a gram -- an amount comparable to a quarter of a peanut). He knows the scientific term for the sexual organ of a salmonella (pillus), and the average time a man sits on a toilet (10 minutes, according to research done himself, using a stopwatch and a stethoscope in a men's room stall at Baylor University). Gerba knows all.

What you catch, in the case of bathroom bacteria, is usually nothing and very occasionally a case of food poisoning. If someone has, say, salmonella food poisoning, their gastrointestinal tract is full of salmonella bacteria, which means their excreta is too. (A healthy person's fecal bacteria are unpleasant enough but harmless.) Let's say this infected person goes to the toilet, has a messy time of it, and gets a microscopic amount of the brown on her fingertips while wiping. Now she touches the faucet. If you touch it after her, you could take salmonella home on your fingers and deposit them in whatever you're making for dinner. If whatever you're making sits out on the counter long enough for the bacteria to multiply sufficiently (and isn't then cooked), you and your dinner companions might end up with food poisoning.

Simply sitting down on bacteria can't hurt anyone, except possibly the bacteria. Nor is there much bacteria on a toilet seat to sit on. According to Gerba, toilet seats suffer an undeserved reputation for filth. In 1998, he and two colleagues took swabs from 14 sites in household bathrooms and kitchens, and cultured them to check for E. coli and other fecal bacteria. "The toilet seat was one of the cleanest spots in the house," he reports. "The refrigerator door handle was dirtier. And the cutting board. There are 200 times more fecal bacteria on a cutting board." In this case, the fecal material usually comes from chickens -- who literally have the shit squeezed out of them during processing -- and can contain salmonella.

"If you have a choice between licking a cutting board or a toilet seat," concludes Gerba, "pick the toilet seat."

Even toilet seats in public rest rooms are not especially germy. In a 1995 study, Gerba found E. coli on only one out of 59 public rest room toilet seats -- most likely from the toilet water, which aerosolizes into a microscopic mist when the toilet flushes. There were far more fecal bacteria in sinks and on sanitary napkin dispensers, the latter being commonly overlooked by janitors. (Other commonly overlooked bacterial ick zones, as determined by Gerba over the years: hotel TV remotes, vending machine buttons and bank pens.)

I do not have high hopes that what I have written will change the restroom behavior of American women. I told a friend of mine that the average refrigerator handle has more fecal bacteria on it than the average toilet seat, and I then asked her whether, now that she knew this, she would relax about sitting on toilet seats and even forgo the toilet seat cover.

"No," she said. "Now that I know this, I'm going to start using toilet seat covers on the refrigerator handle."