With his controversial privately run schools, entrepreneur David Brennan pushes Ohio into the center of the school-choice debate. 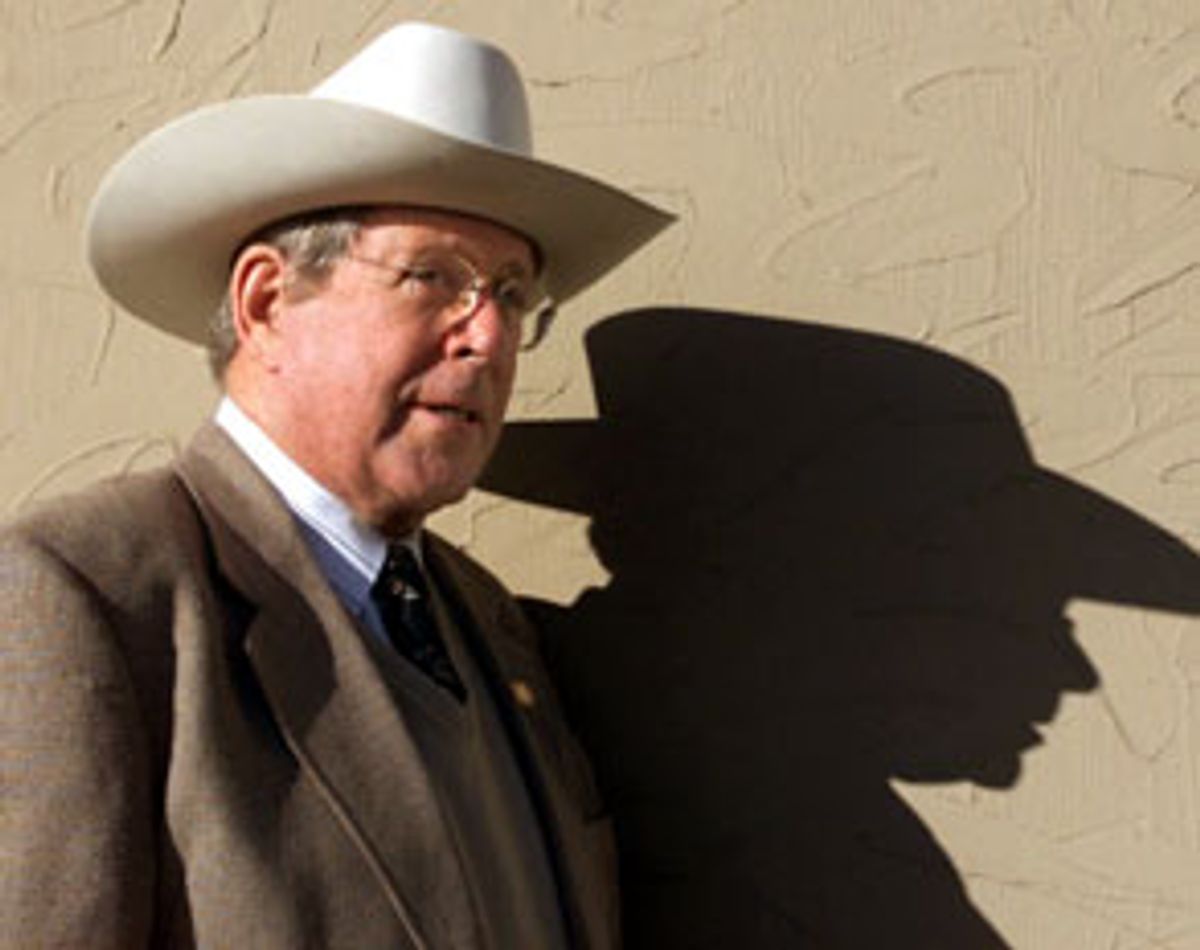 His feet are size 16. He is 6-foot-5, even taller in his signature 10-gallon white Stetson. At 68, Ohio industrialist, lawyer and Republican Party donor David Brennan has accomplished plenty, and he's not done yet. A prominent man on friendly terms with the Bush family and other powerful politicians, he's made more money than he can ever spend. Now, he has set his sights on what he calls the U.S. government monopoly of education -- America's public schools -- and the "educrats" who runs it.

But first, the story of the white hat. In 1986, Brennan bought a steel mill in Alabama that was going broke. "They didn't like these Yankee carpetbaggers because we had to cut back the workforce," he explained in an interview for the PBS series "Frontline," airing on May 23. "A television reporter there asked me, 'What does it feel like coming to this town on your great big black horse wearing a black hat and laying all these people off?'" he recalls. "Well, I said, you got that wrong. I'm on a white horse wearing a white hat, and I'm saving 1,500 jobs."

A week later, Brennan received a letter from a local businessman thanking him for taking over the failing company along with a gift of a 10-gallon white hat. "That became my metaphor," Brennan said, and he wears the hat often.

Brennan's White Hat Management, a for-profit "educational maintenance organization," manages charter schools -- independent schools that are publicly funded, but privately managed, and freed of many of the bureaucratic restrictions on public schools. Vouchers and charter schools, until now somewhat esoteric concepts, are taking center stage in this year's presidential campaign, as George Bush and Al Gore vie to become the "education president." There are now about 1,700 charter schools in the country, attended by an estimated 350,000 students, and in his January State of the Union address, President Clinton called for 3,000 charter schools by next year.

If David Brennan has his way, there will be many more. The Ohio entrepreneur traces his concern about education back to that same Alabama steel mill, where he was shocked to learn that many employees -- in that factory and others he acquired -- were virtually illiterate. So he set up on-site computer learning centers to improve workers' skills and productivity. His concern for learning, triggered by this experience, stayed with him and, after he retired from business several years ago, he turned his prodigious energies to education.

Motivated by his conservative belief in the power of the market and a deep distrust of government, Brennan began using his political connections to press for alternatives to public schools. Since then, he has become a major force in the growing movement to privatize American education. Largely because of Brennan's relentless pressure, Ohio is now a stronghold of school choice.

Appointed by then-Gov. George Voinovich to head up a commission on school choice in 1992, Brennan advocated for a publicly funded voucher program in Cleveland, one of only three such programs in the United States. The wealthy, conservative Brennan teamed up with Fannie Lewis, a black Democratic city councilwoman from a very poor neighborhood that was desperate over the school system's virtual meltdown. Lewis organized rallies and, on one occasion, a caravan of seven busloads of inner-city residents to the state capital to lobby for a city voucher program. (Vouchers are awarded to low-income parents who apply. The families use them to pay for tuition in a private school.)

Once the law was passed, Brennan plunged in himself. He opened two private schools named Hope Academies for students using vouchers. But they did not last long. "The funding of the vouchers is only $2,250 per child," he explains. "We were unable to pay sufficiently high salaries to keep our teachers. We didn't have the attraction of being a religious school." So he closed the voucher schools after three years, then opened charter schools. Charter school funding is considerably more generous: about $5,000 per student.

Now Brennan runs more charter schools than anyone else in Ohio, through White Hat. According to the Ohio Department of Education, it now manages six elementary schools and five high schools in four cities around the state. His company now takes in an estimated $10 million annually in government funding. The high schools, called Life Skills Centers, enroll students who have dropped out or are labeled "at risk." More are on the way.

Brennan brings to this fast-growing enterprise a curious mix of near-religious fervor and devotion to the profit motive. Speaking earnestly of the Life Skills students whom he wants to rescue from their lives on the street, he says, "There are huge voids in dealing with this population, and we're trying to help these persons become solid citizens. I am convinced that a very substantial percentage of our students here will make it." But he also intends to make money at this mission, saying, "Education is first, last and always a business. If it's run like a business it can be done profitably."

The very idea of making a profit from public education troubles many people, including Cleveland Teachers Union President Richard DeColibus. "When it comes down to decisions of what's more important, the child's education or making a bigger profit, profit is always going to win," he says. DeColibus criticizes what he calls Brennan's "Kmart" approach to charter schools.

Promoted as a means of increasing local control and design of schools, charter schools are publicly funded but privately managed, usually by a self-appointed board of directors. In return for freedom from some of the regulations governing regular public schools, charter schools sign an agreement with a state agency specifying what the school will accomplish. But running a school is not an easy thing for interested parents to do, so many boards of directors hire an EMO to be in charge.

EMOs, of course, bring to mind that innovation in health care, the for-profit HMO, which was supposed to spur the reform of the health-care system. Like HMOs, EMOs have their critics, who charge that many of them, instead of facilitating parental input and introducing educational innovation, instead confine their teaching methods to already-existing, standardized, learning systems.

Brennan is quick to admit that he uses computers as an affordable alternative to more effective but expensive one-on-one tutoring. He's proud of the use of programmed instruction for the at-risk students at Life Skills Centers: "The individualized nature of the instruction is what we start with here, and the computer just happens to be the best way to deliver that." Bright students don't like the computers, he explains, adding, "The less aggressive, the less hand-waver in class a student is, the more they love the computer. So it's addressing the very population we're trying to deal with."

He avidly defends his philosophy: "Are we hurting children because we are doing a good job with them? If we are able to make a profit out of an enterprise where everybody else is losing money, is that bad?" Brennan seems untroubled by the apparent conflict between his faith in the private sector and distrust of government on the one hand, and, on the other, his willing use of government money to fund White Hat's business.

Brennan, who has been gun-shy of the media, nonetheless allowed a Frontline crew to film the Life Skills Center in Akron, his home town. Located on the fourth floor of an office building, the place looks rather like a sparsely funded social service agency. There are no frills -- no sports, no art, no prom, not even regular classes. It's hard to find many books. Kids attend in shifts, three hours a day, almost all their time spent in a bare cubicle focused on a computer screen.

In this stripped-down environment, some students look bored and tap their fingers; others whisper back and forth; yet others toil diligently with mouse clicks through the programmed learning courses. The school is racially integrated. Some of the white boys wear short, near-military hairstyles; one says he is headed for the Army. Other white boys sport serious tattoos. Several girls are pregnant. There are a few black girls with elaborate hairdos with extra curls pasted on their heads. Some students look like refugees from gang life. Others look no different from kids in regular schools. But each one has had difficulty in previous schools such as fighting, truancy or drug use. Their family situations are often precarious.

In an interview, student Quishelle Shelten and her mother, Tracie Hollinshead, told why they like Life Skills so much. A pretty girl of apparently mixed race, Quishelle was suspended from her high school for fighting and wanted to drop out. Hollinshead, who is white, pale and has a noticeably enlarged abdomen, was quick to explain her appearance. "I am waiting for a liver transplant; I'm not pregnant," she said.

Troubled by Quishelle's discipline problems, Hollinshead wanted her to stay in school. But because of her illness, Hollinshead needs help from Quishelle in caring for her three younger children. For that family, Life Skills has been the answer: Since she only needs to be in school for three hours a day, the daughter can hold a part-time job, help at home and work toward a high school diploma. "Quishelle comes here faithfully; she has grown a lot," says her mother.

Life Skills requires the students to hold part-time jobs. They get advice from visiting bankers, public health officials, employment counselors and the like. For a uniform, each one wears a school polo shirt and dark slacks or a skirt; hats are not allowed. By the terms of its charter with the state, Life Skills grants high school diplomas to students who pass a basic proficiency test and other minimal requirements. With a high school diploma, kids can join the military or get a better job. But, according to Brennan's daughter, Nancy, who works for White Hat, more than one third of the more than 600 students who have attended the Akron school fail to meet even that low standard and have dropped out. Her father speaks wistfully of opening yet another school for them.

But he has encountered opposition to his expansion plans. Moreover, Brennan was lambasted in his local paper, the Pulitzer Prize-winning Akron Beacon-Journal, in a four-part investigative series last December called "Whose Choice." Buttressed by extensive documents on the paper's Web site, as well as other articles since, reporters Doug Oplinger and Dennis Willard took the formidable entrepreneur to task. "In education, money talks," read one of the headlines over an article detailing Brennan's campaign contributions, access to decision-makers, and success at achieving school choice.

Among the newspaper's charges: