They swear. They hunt. They make millions. The "eBoys" of Benchmark Capital and "Confessions of a Venture Capitalist" show us the ropes of Sand Hill Road. 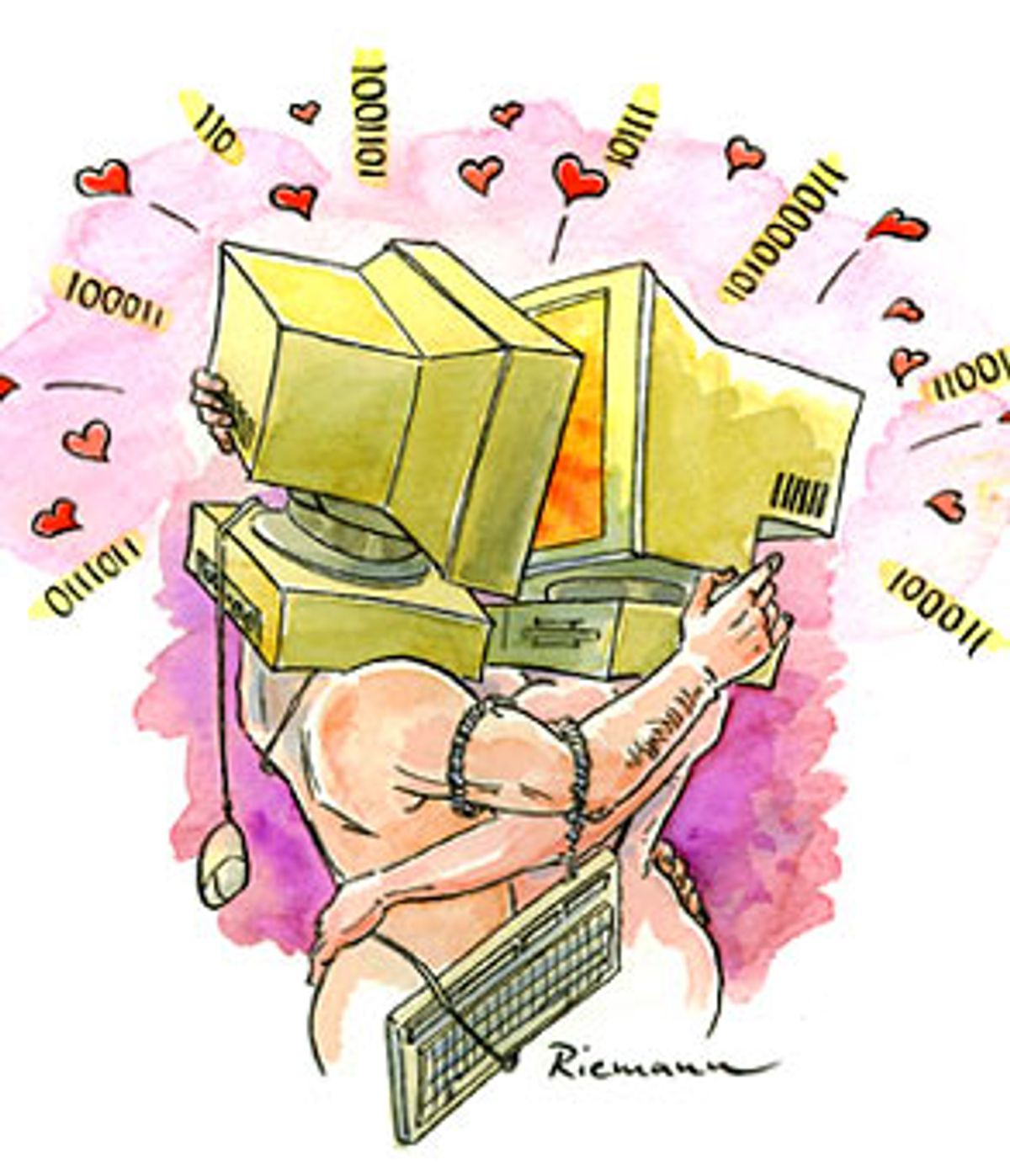 "eBoys: The First Inside Account of Venture Capitalists at Work"

"Confessions of a Venture Capitalist: Inside the High-Stakes World of Venture Financing"

Q: "How many venture capitalists does it take to screw in a lightbulb?"

With the exception of public relations flacks, there's probably no profession in the tech food chain that suffers from such bad PR as venture capitalists, who have a reputation for being back-stabbing, dastardly, greedy vultures.

Two new nonfiction books want to let the repositioning begin. "eBoys" gives us "venture guys" as boy heroes in their own multibazillion-dollar action-adventure, and "Confessions of a Venture Capitalist" inaugurates the VC as a self-help guru, dispensing advice on all things entrepreneurial. I wouldn't pony up for a 30 percent equity stake in either.

Randall Stross' "eBoys" is the heady tale of the Internet gold-rush years at an ambitious new Silicon Valley venture capital firm, Benchmark Capital, which funded the likes of eBay and Webvan and, over the course of four years, has increased each of its partners' personal net worth by some $350 million.

Stross, a professor of business history at San Jose State University, who also wrote "Steve Jobs and the NeXT Big Thing" and "The Microsoft Way," finagled impressive access to the cloistered world of venture deal-making, sitting in on the heated meetings where the Benchmark partners hash out which entrepreneurs and ideas deserve their enormous cash injections. For a story that takes place largely in conference rooms, "eBoys" is surprisingly fast-paced and engaging: a page-turner laced with juicy, frequently profane dialogue.

But if you don't happen to be an entrepreneur looking for clues on how to woo your own venture capitalist or a newly minted MBA hankering to nail a cool $350 million for yourself in four years, what makes "eBoys" compelling isn't what the partners do or don't fund and why; it's how they think of themselves.

It's rapidly clear that the guys at Benchmark have utter contempt for exactly the kind of men that outsiders might take them for: filthy-rich power brokers, keepers of the moneybags, who green-light or squash the grand schemes of struggling entrepreneurs at their whim.

The eBoys at Benchmark, which has only been around for four years, absolutely bristle at being mistaken for some blue-blood, monied club, though that's precisely the way they regard their arch-rivals at Kleiner, Perkins, Caufield & Byers, which was established in 1972 and is the home of celebrity VC John Doerr. "The haughtiness of aristocrats versus the scrappiness of up-from-the-bottom plebeians"; that, Stross writes, is how they regard the culture of Kleiner's firm as compared to their own.

The Benchmark partners even worry that their own kids, growing up unfathomably rich, will turn into the kind of priggish bow tie- and suspender-wearers they abhor. "I'm going to have kids like the kind I hated when I was a kid," worries one partner.

The eBoys conceived Benchmark's structure as a "Communist capitalist system" -- all the partners share equally in their influence on deals and in the spoils of the deal-making, unlike the hierarchical structure of most venture firms, where tiers of associates wield less power and garner less compensation. Now, there's an Internet-era conception of sharing the wealth -- sharing it equally among yourselves.

How delicious, then, that Benchmark partner David Bierne's grandfather was a union leader, working 42 years on an assembly line, while Bierne has to worry about "unionization headaches" at Webvan, his new multibillion-dollar Web delivery play.

Or that partner Bob Kagle, from a working-class family in Flint, Mich., was the first person in his family to go to college -- the General Motors Institute, an institution owned by the automaker. What could possibly be more Old Economy? After completing graduate school -- a Stanford MBA paid for by GM -- he took a job at a management consulting firm, only after fretting over a decision about whether it was wise to give up his future GM pension.

The Benchmark guys see themselves as rebels, upstarts, renegades in the tony world of venture financing; they see themselves not as "investors" (a word they disdainfully regard as a "euphemism for 'gambler'"), but as "company-builders." And, throughout the book, they operate with a level of frat-boy enthusiasm for "winning" -- never making money, always winning -- that seems lifted from a basketball court, not a Sand Hill Road boardroom. Indeed, the average height of the partners in the firm is 6-foot-5. Here, just introducing a business partner under 6 feet would be a huge win for diversity -- a radical move, in the same way that bringing on a woman partner would seemingly require blowing up the firm's culture.

The partners' unabashed machismo knows no limits. "Yeah, I'm a pussy," laughs Bierne, when he's itching for the firm to sell its shares in eBay when the stock is trading at just 72. "[He] wanted to date before he fucked," says a partner trying to explain why one entrepreneur was slow to get down to the business of making a deal. And when the partners are checking out potential partner Bill Gurley -- they call him "the Gurley Man," get it? -- one of them takes him on a mano-a-mano weekend hunting trip. A hunting trip! Gurley's hunting companion is impressed by the recruit's willingness to jump off a cliff, gun in hand, to chase after a fleeing wild boar. "He is kind of an animal," marvels one partner. The 6-foot-9 Gurley certainly meets the height requirement. Of course, he is invited to join the team.

It's fascinating that the eBoys look down on ostentatious displays of wealth, though they traffic in extreme quantities of money. Maybe because such extravagance might imply they're in this business for personal gain? Of his new "low-end BMW," one partner says: "I like it 'cause it doesn't look like a BMW, it looks like a Toyota." This is the kind of ludicrous distinction that clearly only another venture capitalist would be qualified to understand.

One of the great riddles of the so-called New Economy is why the lucky dogs who amass tremendous fortunes in short periods of time don't give up work, work, working all the time. A few clues from these eBoys: For one, they're intensely, even manically competitive with their peers at other firms -- "I believe John Doerr wants me to die; I'm totally in touch with that," says Bierne. The game never ends; there's always another multibillion-dollar "win" to be had or to be lost to the guys up the street. And these guys live with the anxiety that their success will appear to be a matter of luck, being in the right place at the right time -- say, on Sand Hill Road during the commercialization of the Internet -- not the result of skill or brains or guts or good judgment. "One monkey don't make no show," says Kagle, explaining why he works even harder after eBay's monster IPO, a deal regarded as one of the best venture investments of all time.

"Confessions of a Venture Capitalist" is less confessional than it is didactic. The book is really a how-to volume for the budding entrepreneur who wants to start a venture-financed company. The author, Ruthann Quindlen, a partner at Institutional Venture Partners or IVP, just down the street from Benchmark, gives short shrift to her own background and "how I became a VC" tale, and spends the majority of the book instructing entrepreneurs on how to rev up their start-ups.

Notably, the advice is less about how to be a success, and more how to avoid being a failure, drawing extensively on Quindlen's firsthand knowledge of various bungled deals, entrepreneurial missteps and company flameouts. "I believe it's difficult to learn much from success stories ... The most interesting thing about success is that it's often due mostly to a confluence of factors: someone was in the right place, at the right time, with the right idea." (Are you cringing, Benchmark guys?) But much of the advice in the book will be familiar to the reader of any number of dot-com business magazines. The old saw "You Can Have a Small Piece of a Large Pie or a Large Piece of Nothing" is the title of one chapter.

But what's found here that's not often in the glossies is an insider's analysis of what happened at such botched ventures as Purple Moon, the ill-fated girl's software company spun out of the now-defunct Interval Research. Despite the conceit that there's no shame in failing in Silicon Valley, it's rare that anyone talks openly about failures they have been involved in personally. Most amusing are the real-life business plans that didn't make it -- "the portable backyard nuclear reactor," a must for every modern family!

After the whirlwind guy's world of "eBoys," it's clear why an aspiring entrepreneur might cling for guidance to pearls of wisdom like "Five Things a CEO Should Not Say at a Board Meeting," including this gem: "If that's the way the board feels, maybe you should get someone else to run the company."

But sometimes the "Venture Financing for Dummies" act goes to extremes, veering into deadpan comedy. The appendix of "Confessions of a Venture Capitalist" actually goes so far as to define the word "profitability" as "the company is taking in more money than it is spending." Maybe profitability really is such a quaint concept that it needs to be defined in black and white. Or perhaps "life in the bubble," as Quindlen describes the rarefied, "breathing its own fumes" Silicon Valley world that she and the Benchmark guys inhabit, just makes it seem that way.

While "Confessions of a Venture Capitalist" whispers in the ear of a reader who aspires to live in that bubble, "eBoys" caters to armchair Zeitgeist watchers, who may be wondering exactly how those clean-cut West Coast guys who get their own fashion spreads in GQ got so rich. Both are clearly eager to capitalize on the public fascination with New Economy moneybags.

"By the approach of the year 2000, the venture guys comprised the symbolically pre-eminent profession that served to define the nineties in the same way that investment bankers had in the eighties, investigative journalists had in the seventies, and hippies -- as the antiprofession -- had in the sixties," writes Stross.

If that's indeed the case, let's be glad the '90s are over and find some new icons.