Intrigue under the big screen

At a 1-dinar cinema in Amman, Jordan, the real story has little to do with the movie itself. 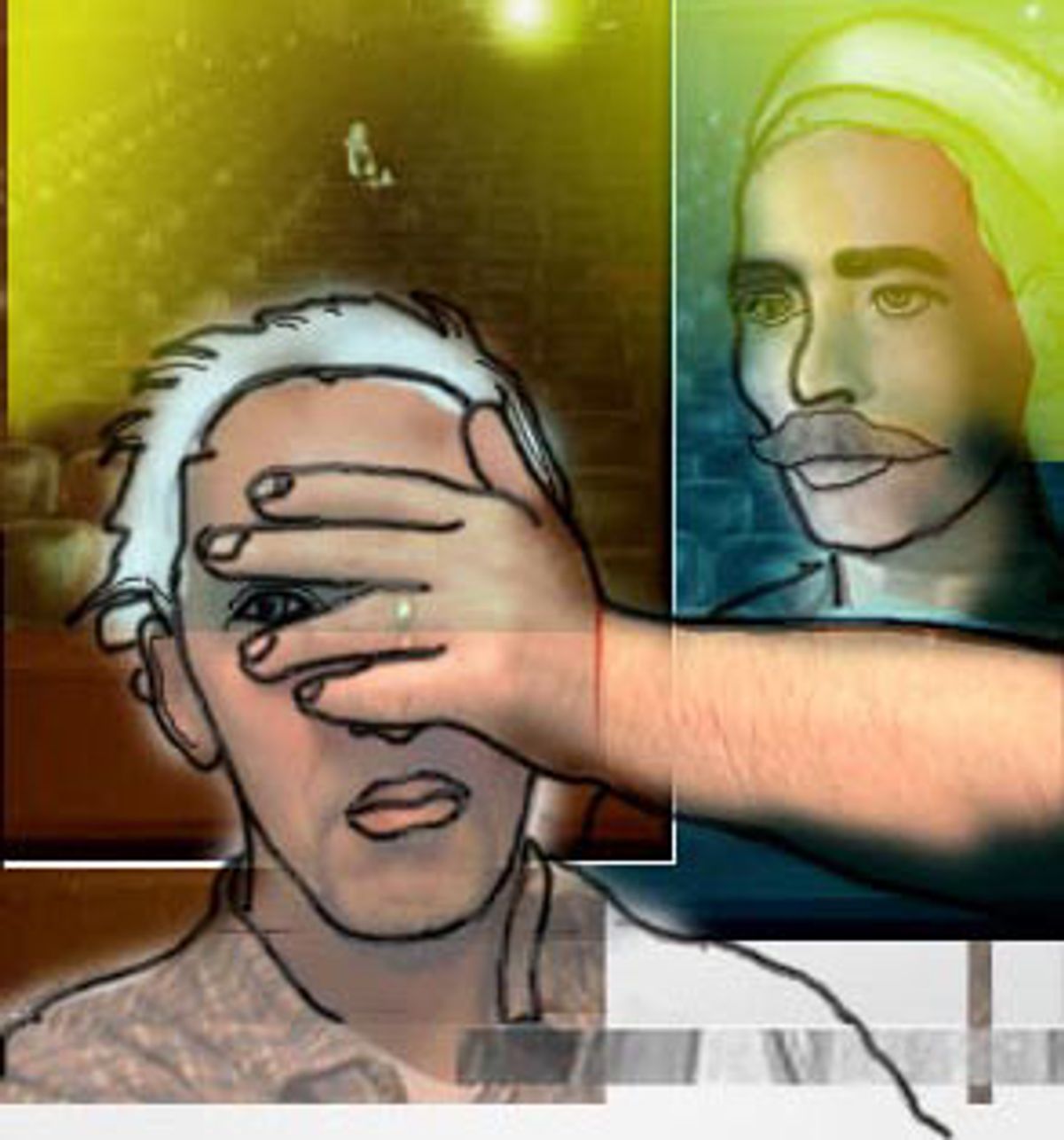 From the moment I enter the cinema and start searching in the dark for a seat, I can tell something is not quite right.

For starters, the movie on the big screen isn't "Die Hard," as I had expected, but a black-and-white '70s-era Arabic film starring a polyester-clad protagonist with sideburns the size of Brillo pads. I go back out to the foyer to inquire about "Die Hard," but the doorman just waves me back inside. Figuring a little patience and curiosity can't hurt, I find a seat near the aisle and try to make sense of the film.

The plot proves to be a mesmerizingly bad mix of action, romance, mystery, slapstick comedy and social commentary. So broad is the premise that the hero seems to spend most of his time racing from genre to genre. In the span of a few minutes, we see him running down the street shooting a gun, breaking up a squabble between his enormously fat neighbor and her improbably skinny husband, making an emotional phone call to a worried-looking woman and sitting in jail while his cellmate dreams of belly dancers. The token sex scene -- no more than 30 seconds from foreplay to cigarette -- features no disrobing, no stylized fadeaways and no changes in facial expression. After a while, I can't help enjoying it.

Then, just as the bad guys are celebrating their apparent triumph -- just as the fat neighbor lady accidentally uncovers a clue that will change everything -- the reels change, and an old Hong Kong action scene flickers onto the screen.

I wait for the Jordanians in the audience to whistle, throw popcorn or shout curses at the projectionist. Instead, nothing happens: Small groups of Arab men slouch in their seats, chatting and smoking cigarettes; others get up and make their way to the bathroom under the stage. A few fellows stand up from their seats to stretch their legs, but not a soul expresses any concern about the fate of the bad guys, the Brillo-pad hero or the huge woman with the tiny husband.

After about 10 minutes, the Hong Kong movie ends and the lights come up. A couple of vendors stroll into the theater to sell sandwiches and tea. Figuring this to be some sort of timeout while the projectionist searches for the last reel of the Arabic movie, I stay in my seat.

When the lights go down again, however, a blurry, French soft-porn movie comes up on the screen -- again without a peep of protest.

As intrigued as ever, I settle into my plywood theater seat and wait to see what any of this has to do with "Die Hard."

When I first arrived in Amman from the ancient stone city of Petra that morning, I knew that I wouldn't devote much of my time to standard tourism in Jordan's capital. Granted, the city has a long and storied history -- both King David and King Nebuchadnezzar II sacked the place long ago -- but its modern incarnation just doesn't have much character when compared with other regional capitals such as Cairo, Egypt, or Damascus, Syria.

Rather, with tidy concrete buildings on its myriad hillsides and late-model Nissans navigating its calm streets, Amman struck me more as a bedroom community than a place to visit in and of itself. And since Petra had already given me my fill of ancient monuments, I decided to forgo the smattering of ruins in Amman. Instead, I sought out what the city had to offer in the way of Hollywood-style entertainment.

Admittedly, watching American movies while visiting foreign countries is a bit contradictory, but it's actually one of my favorite travel vices. This is because travel -- which is commonly seen as an escape from the routines of home -- can often take on a routine of its own through simple, recurring challenges like communication, transportation and nutrition. Even within the escapist setting of travel, I've found that movies allow me to enter into a new, neutral territory -- a darkened, womblike zone where, at least for a couple of hours, all reality is suspended. There, I can let my imagination be painted with glorious, nonsensical shades of possibility. I find that I leave the cinema with a heightened sense of magic: When I walk outside, the foreign streets have become even more vivid and intimate than they were before.

Granted, my life doesn't change much after this, nor does my brain enlarge, but the visceral buzz is worth the admission fee.

In Amman, recent Hollywood movies are screened in the shopping malls of upscale neighborhoods such as Shmeisani, and cost about the same as they would in America. Older American and Arabic movies, on the other hand, play in the various run-down cinemas of the downtown area, and cost just 1 dinar ($1.43). Since my hotel was downtown, I decided to see what these cheaper cinemas had to offer. When I saw a poster for the 1988 Bruce Willis action flick "Die Hard" hanging outside a small cinema on Basman Street, I couldn't resist.

I'm pretty sure this particular movie is about a man with a mustache who woos a woman pharmacist in an effort to seduce her daughter -- but I can't be sure. The various reels look as if they've been played every day for the past 10 years; all the colors have washed out into shades of brown, red or orange and some scenes have no audio whatsoever.

I don't have to wait long, however, before my assumptions are trumped.

At some point after the third missing sex scene, a hefty Jordanian man settles into the seat next to mine. He sits so close that I move one seat over just to give us both a bit of breathing room. After five minutes, he leans over toward me.

I gesture to the place under the stage where all the men have been coming and going since the first feature. "Henek," I say. "Over there."

Toilette Man waddles off to the bathroom, and I return to the befuddling tale of the mustache man and the pharmacist.

I give him a puzzled look. "Mafeesh mushkellah," I tell him, patting my bladder. "No problem."

Toilette Man gives me a leering grin, then gently slips his hand onto the place where my thigh meets my hip.

Toilette Man's grope sends me springing toward the ceiling. I make it up to a high crouch before I bang my knees on the seats in front of me and collapse back into my chair. Toilette Man looks over at me, embarrassed; I hear tittering behind me. Flustered, I retreat to an empty corner of the cinema and wait to see what happens next.

Since the men behind me saw what happened -- and since, for all its modernity, Jordan is a very conservative society -- I expect Toilette Man to flee the cinema in shame. Instead, he just moves up a couple of rows and begins to stroke the hair of a boy in a leather jacket.

Up on the screen, the mustache man is forcing the pharmacist to perform a late-night striptease in front of her apothecary; below, in the seats, Leather Jacket Boy leans over and gently rests his head on Toilette Man's shoulder.

The lack of effeminacy is, I believe, a subtle clue as to what's going on here. British adventurer T.E. Lawrence noted a similarly curious phenomenon among his rugged young troops during the Arab revolt of World War I: "Our youths began indifferently to slack one another's needs in their own clean bodies," Lawrence reported, "a cold convenience that seemed sexless and even pure. Later, some began to justify this sterile process, and swore that friends quivering together in the yielding sand with hot limbs in supreme embrace, found there hidden in the darkness a sensual coefficient of the mental passion which was wielding out cut souls and spirits in one flaming effort."

Literary historian Robert Irwin offered a similar analysis in slightly more clinical language. "Indeed," he wrote in his companion to "The Arabian Nights," "it may be a mistake to think of there being one rectified condition, 'homosexuality,' which has remained more or less constant in its characteristics from century to century and culture to culture. There is some evidence to suggest that in medieval Arab society active homosexuality was regarded as an acceptable way of finding relief from sexual tension, but that passive homosexuals and those who cultivated effeminate traits were scorned."

In keeping with Lawrence's and Irwin's observations, I'd reckon that what's going on under the Jordanian big screen this evening is the modern continuation of that sexual middle ground: a symptom not of pure homosexuality per se but the lack of more accessible sexual options for single men in this society. Granted, the capital looks progressive on the surface, but Jordan is still a society where men who kill their sisters for moral "honor" receive a reduced prison sentence if they can prove she was promiscuous. Since this makes it prohibitively dangerous for would-be party girls to exercise their sexual freedom, it would appear that a few of the lonely party boys have turned to each other in the darkness of this cinema.

As the lights go down again, I get one last surprise: The final movie of the evening is not "Die Hard" but "Hard to Kill," starring Steven Seagal. As the opening scenes flicker onto the screen, I get up to go -- not because I particularly dislike Seagal or fear more homoerotic come-ons but because I've lost all faith in the projectionist's ability the show an entire movie.

Reasoning that I've already gotten my dinar's worth of entertainment in this place, I walk out to Basman Street and hail a cab, hoping to catch a late movie in the more predictable confines of the Shmeisani suburbs.