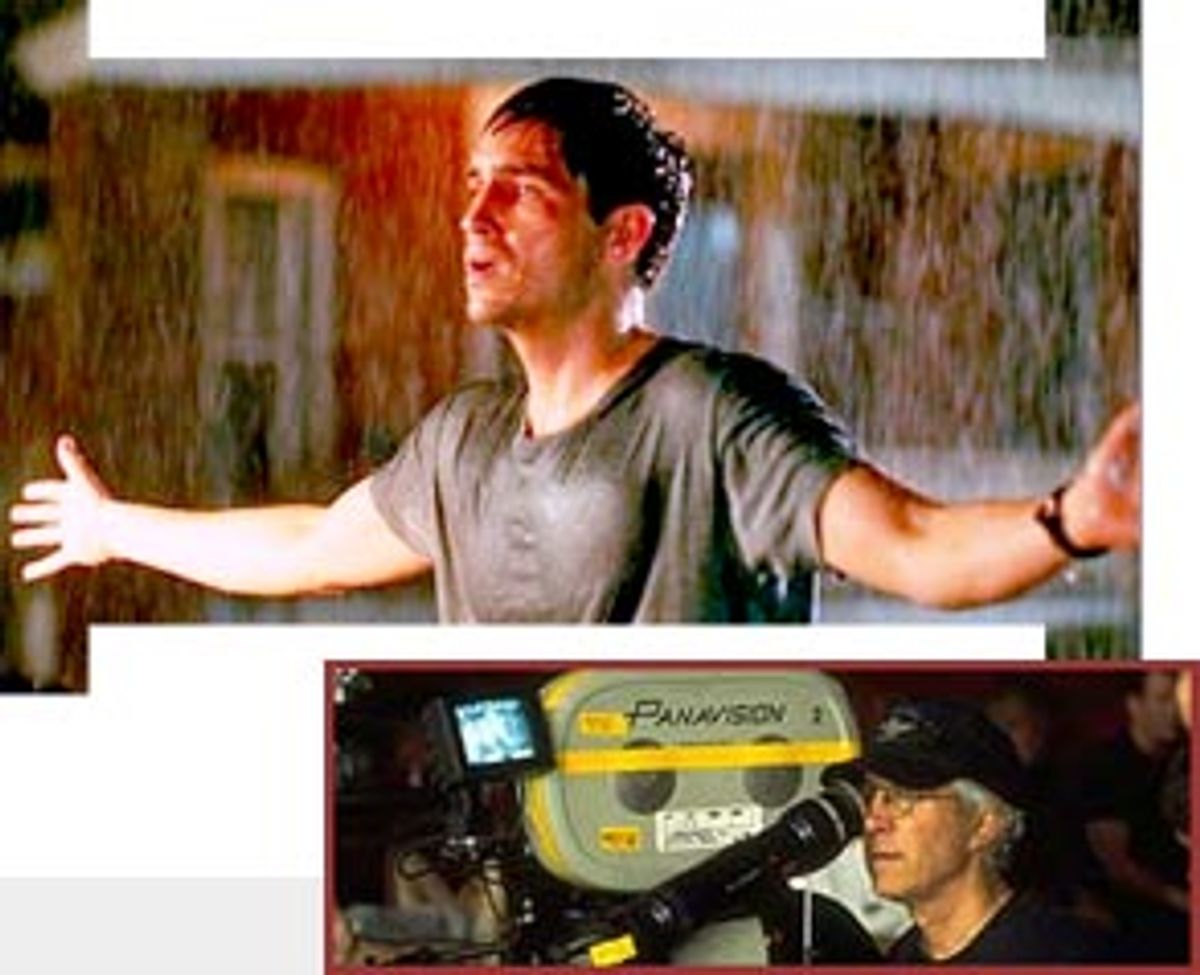 The opening scenes of "M:I-2" have the luxe travel-brochure allure that's been missing from the Bond movies for years. The director, John Woo, and his cinematographer, Jeffrey L. Kimball, give Seville, Spain, a slightly humid, candlelit beauty. Everything on-screen looks as if it was put there to seduce you. By the time Tom Cruise, reprising his role as IMF agent Ethan Hunt, and Thandie Newton, as the top thief he's been ordered to recruit for his latest mission, start giving each other the eye across a room of flamenco dancers, the attraction between them just seems to be a result of breathing the air.

But Cruise and Newton both have a lot to do with that spark. Cruise reveals a lascivious playfulness he's never shown before. He stretches out fully clothed in a bathtub while Newton straddles him as she picks a lock, and his smile is so openly carnal that you can't help laughing. And Newton is a knockout -- brainy and witty and so warm that the amber glow of these scenes might be coming off her caramel skin.

If the movie had made a place for these two to carry on their flirtation amid the pyrotechnics we know are coming, "M:I-2" might have been consistently sexy fun. Woo has always been something of a romantic (you don't make movies preoccupied with heroism and codes of honor if you aren't) and he seems to take real pleasure in the scenes between Cruise and Newton, maybe because they're just about the first real love scenes he's ever had a chance to film. But the plot calls for Newton to reconnect with old flame Dougray Scott, an IMF agent turned baddie, in order to infiltrate his plan to obtain a deadly virus and sell it to the highest bidder.

Screenwriter Robert Towne (who gets screen credit for a script that was also worked on by Wesley Strick, William Goldman and Michael Tolkin) may have lifted that from Hitchcock's "Notorious," where agent Cary Grant has to watch as Ingrid Bergman, the woman he loves, marries Nazi Claude Rains. But Towne hasn't written the script to focus on Cruise's sexual jealousy (which he plays well, when he gets to play it) or Newton's repugnance at having to bed down with a man she despises (ditto).

It's not that "M:I-2" is badly made. It would be hard to find a Woo film that is. The man is an absolute wizard at action scenes. In the climax he stages a motorcycle chase and then a hand-to-hand combat scene between Cruise and Scott that are marvels of hairbreadth timing. And as fast as they are, they are very cleanly shot. There's not a second where you can't follow the action or not tell where the characters are in relation to each other. At one point, a frenzied bit of fighting abruptly halts in a spectacular shot of a knife's point stopping just millimeters from Cruise's eye, and the sudden shock of it makes you gasp. The action sequences in "M:I-2" are so clear and well made they stand virtually alone among all the clichéd camera-shaking sequences littering up screens in other action movies.

But even the most spectacular things Woo unleashes here feel strangely impersonal. The pleasure of Woo's Hong Kong films wasn't just seeing someone beat Hollywood at its own game, it was seeing a filmmaker operating free of the post-everything irony that's infected movies. "The Killer" and "Hard Boiled" were pictures made by someone who hadn't heard that audiences had gotten too hip for old-fashioned plots, so they seemed weirdly innocent. But it's hard for a filmmaker to retain that kind of freshness when operating in the hyper-calculated atmosphere of Hollywood. In his last picture, "Face/Off," Woo triumphed seemingly by dint of sheer perversity; the movie operated as a grand grotesque joke and a hall of mirrors for its two stars, John Travolta and Nicolas Cage.

There's nothing in "M:I-2" as strange or weirdly affecting as the shootout in "Face/Off" set to "Over the Rainbow." Woo's trademarks are all over the place, but he hasn't found a way to revitalize his favorite tricks or to use them to express new things. In "Mission to Mars" you can see Brian De Palma finding a new way of deploying his beloved slow motion just by shooting scenes in the zero gravity of space. "M:I-2" feels rote. There are all sorts of gadgets on display, but no feel of high-tech frivolity. And for all the kinetic movement, Woo doesn't impart any sense of physical exhilaration. That final fight between Cruise and Scott is incredibly choreographed, but brutal. You can't enjoy the high-flying charge of a martial-arts sequence when the actors are huffing and puffing as they slam each other to the ground or get bashed in the head with rocks. The big set piece, Cruise's breaking into a heavily guarded pharmaceutical company, is just a retread of the CIA break-in sequence in the original, and it doesn't have an ounce of the witty, quietly layered suspense of that sequence.

Cruise (who produced the film with his partner Paula Wagner) apparently wants each film in the franchise to have a different feel. The trouble is that "M:I-2" suffers in every way by comparison to the original. De Palma's "Mission: Impossible" had an autumnal, nearly abstract beauty and a sneaky, highly personal subtext. Within the guise of a spy story, De Palma made a film about what it means to be a talented pro at the mercy of dull, unimaginative corporate superiors. Hunt's government bosses, ready to brand him a traitor simply because he trusts his instincts above their regulations, were an espionage version of the studio bosses De Palma has had to justify himself to over the years. The movie was to him as "The Killer Elite" was to Sam Peckinpah. Unfortunately, the mediocrity he was dealing with extended to critics and audiences.

The most common complaint made about "Mission: Impossible" was that the plot made no sense. Actually, the plot made perfect sense (unlike the sequel, with its gaping holes) and was laid out clearly. The confusion came from the fact that it was laid out entirely in visual terms -- for instance, in the sequence where Cruise narrated a series of events to Jon Voight, but visualized them in an entirely different way, letting us know that he knew something Voight didn't know he knew. It was one thing for audiences to find that the movie went by too rapidly for them to process, but it was depressing to hear critics confessing their own inability to read a movie visually. Especially when one of the movie's themes, one of De Palma's recurring themes, is the deceptiveness of visual information.

There's nothing nearly as sophisticated as that going on in "M:I-2," and that would be OK if Woo had found some action-movie joie de vivre. But the film plods along mechanically, stopping dead whenever there's an exposition scene. (Particularly if it involves Scott, who acts with a glowering brow in the manner of young actors mistaking intensity for characterization.) Anthony Hopkins brings some life to an unbilled cameo as Hunt's boss, and though you'd have to work not to enjoy Ving Rhames, I wish his part consisted of more than noodling at computer keyboards. I got a kick out of seeing the terrific Irish actor Brendan Gleeson ("The General," "I Went Down") playing an English corporate smoothie, but he's wasted here.

The surprise of the movie (for me at least) is how enjoyable Cruise is. He had an action-figure athleticism in the first movie, and in the best scenes here, he has as well a sexiness that stops just short of slyness. Cruise may be too much an all-American type at heart to be a truly wily secret agent hero, and when he has to express sorrow at letting down a man whose life depended on him, he's still not convincing as an actor. But he's fun to watch and basically likable. His best move, though, may have been choosing Newton as a costar.

Cruise had to know he was making a statement by choosing a black leading lady; smartly, the movie doesn't even address it. (Which is the way we might finally see integrated couples treated as no big deal on the screen.) Newton, who was brilliant last year in Bernardo Bertolucci's "Besieged," is a just-about-perfect combination of strength and vulnerability. With a palpable edge in her line readings and a sense of revulsion never far beneath the surface of the masquerade she's playing, Newton has a slightly tremulous quality that humanizes the movie; when she's in danger a real person is at stake. "M:I-2" is a letdown in all sorts of ways, not least of which because it's such a routinely "spectacular" follow-up to such a distinctive hit. But the movie's sins pale next to its biggest one: that it can't provide a role worthy of this walking stunner.