Madonna's stalker didn't mean any harm; he just wanted to be near her. Plus: Posh's plans to pop 'em out. 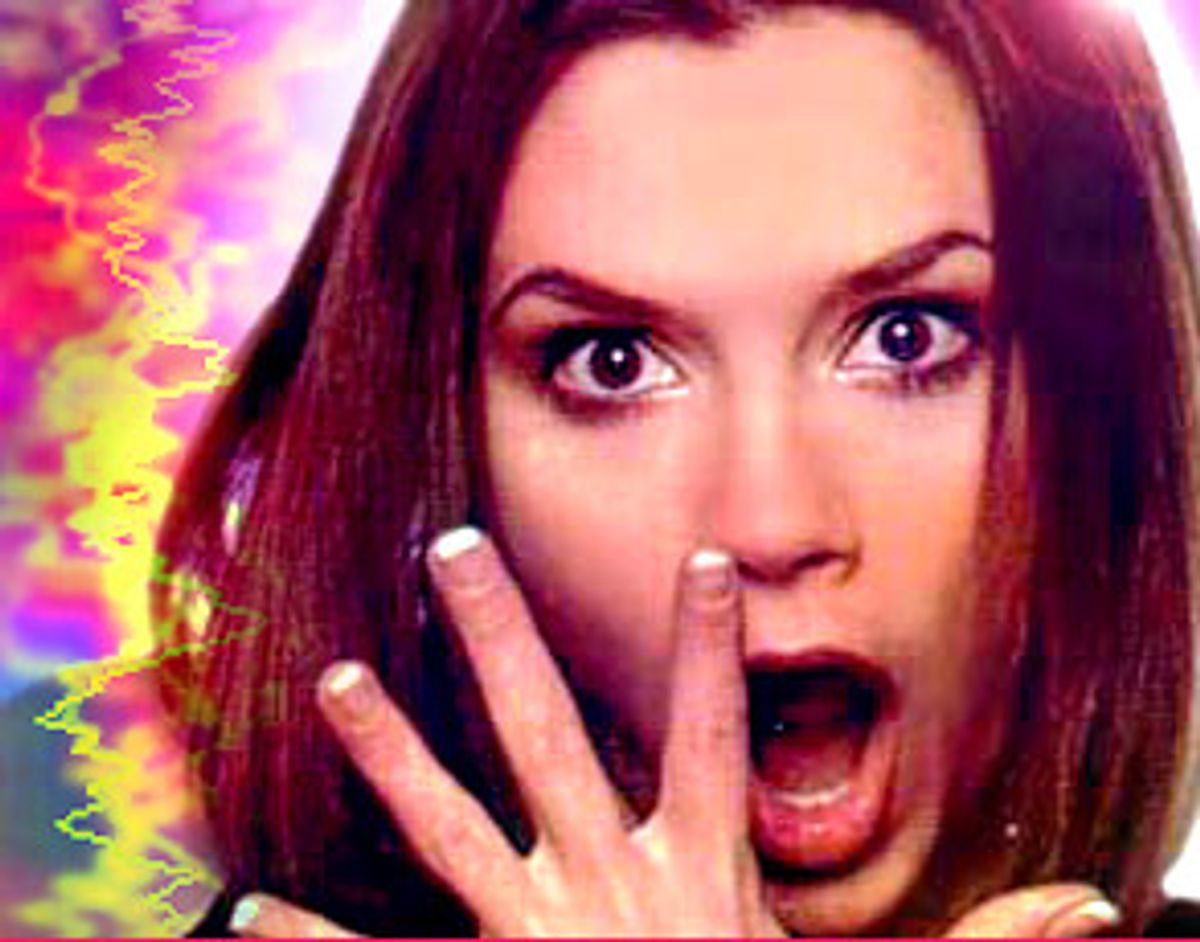 The U.K. Sun contends that Jonathon Sanders, who was allegedly punched and
kicked by Madonna's beau Guy Ritchie last week, has been a
"longtime worry" to the preggers popster.

"He's a nutter who has been following us for months," fumed Ritchie. The
director, who faces charges of assault, claimed that he sprang into
action when Sanders tried to open the door of Madonna's car. "It was
frightening," he said. "I was trying to protect her."

Sanders, meanwhile, reckoned that while he might be a "bit obsessed," he
didn't think he was a "stalker" per se. "I have been a fan for 10
years," he said. "She means everything to me."

But, he says, "It's rubbish to say I tried to get in the car. I just
wanted to be near her and to see her."

And smell her and touch her ...

"It's hard to keep trying to fight the good fight against the Britneys."

-- Smashing Pumpkins frontman Billy Corgan on why the band plans
to break up at the end of the year.

Which came first, the fat chick or the egg on her face?

Alicia Silverstone says it was clueless press speculation about
her weight that drove her to the bread basket back in those beefy Batgirl days.

"I've never been heavy," she told Fashion Wire Daily. "What
really hurts is, when they say that, I know I have a lot of young fans.
So for them to go, 'Wait a second. Alicia Silverstone is fat? Then what
the hell am I?'"

So, natch, she fought back with the fork. "When they were writing all
that, I did gain some weight, because when I read that, I ate more," she
says, adding that, now that she's a vegan, she has "no problems with
weight, and I will never have any problems with weight ever again."

-- Hugh Grant, upon emerging from the house he still shares with
ex-squeeze
Elizabeth Hurley and facing a swarm of reporters and
photographers.

Sure hope David Beckham has left room on his bod for a few new
tattoos. His wife, Victoria Beckham (a.k.a Posh Spice),
apparently wants to make lots of little brothers and sisters for little
Brooklyn. "Nothing will put me off having more children -- I want at
least three more," the Posh One told the U.K.'s Heat magazine. "We've
bought a huge house and I want to fill it with children. I've always
been in a family where there's loads of people round the dinner table
and the telly's on in the background, and I want to create the same kind
of atmosphere." Just tell me she doesn't plan to name them Manhattan,
Queens, the Bronx or Staten Island ...

Talk about "man bites dog." A freelance journalist is suing Ashley
Judd for libel. According to the Associated Press, writer Larry
Birkhead contends that the actress made defamatory statements about
an article he wrote for USA Today on "Entertainment Tonight." The
syndicated TV show has also been named in the suit. Judd called
Birkhead's article (which alleged that Naomi Judd would not
comment on her daughter's R-rated turn in "Double
Jeopardy") a "complete fabrication" and claimed that her mother gave
her "total enthusiastic response to the film." Birkhead is seeking
punitive and compensatory damages.

In related Spice Girl family news ... Mel B's looking forward to
her divorce so much it's scary. Getting rid of Jimmy Gulzar once
and for all, she told Hello! magazine, will be a big "relief." Splitting
from the Dutch dancer (and father of her daughter) has "cost me a lot of
money -- too much," she said, "but as long as he's out, gone." As for
marrying her current beau, actor Max Beesley, she said, "I can
tell you this much, I'll never rush into it again." At least she
wouldn't have to change her initials again.

Stop your sobbing. If Chrissie Hynde
manages to tread on the right side of the law for the next six months,
the charges against her relating to her PETA protest at
a New York Gap store will be dropped. However, the Pretenders singer
told the Manhattan Criminal Court that she and her fellow animal-rights
activists (who tore up leather and suede clothing at the Rockefeller
Center Gap on March 9) had "no regrets," adding, "We were trying to make
a point -- that was our mission." Careful, Chrissie. Outbursts like that
could land you back on the chain gang.

Dance, Harry, dance! Will everyone's favorite wizard be a whiz at
pirouettes? According to Ain't It Cool News,
14-year-old ballet student Jamie Bell is the front-runner for the
title role in "Harry
Potter and the Sorcerer's Stone." Stephen Daldry, who
recently directed Bell in the film "Dancer," told the site, "Jamie has
the charisma to hold the whole movie. He also has the special gift of
being able to dance well enough to be trained by the Royal Ballet
School." OK, but how is he on the Quidditch field?