The House of Representatives approves permanent trading status for China, but the move is mostly a symbolic gesture. 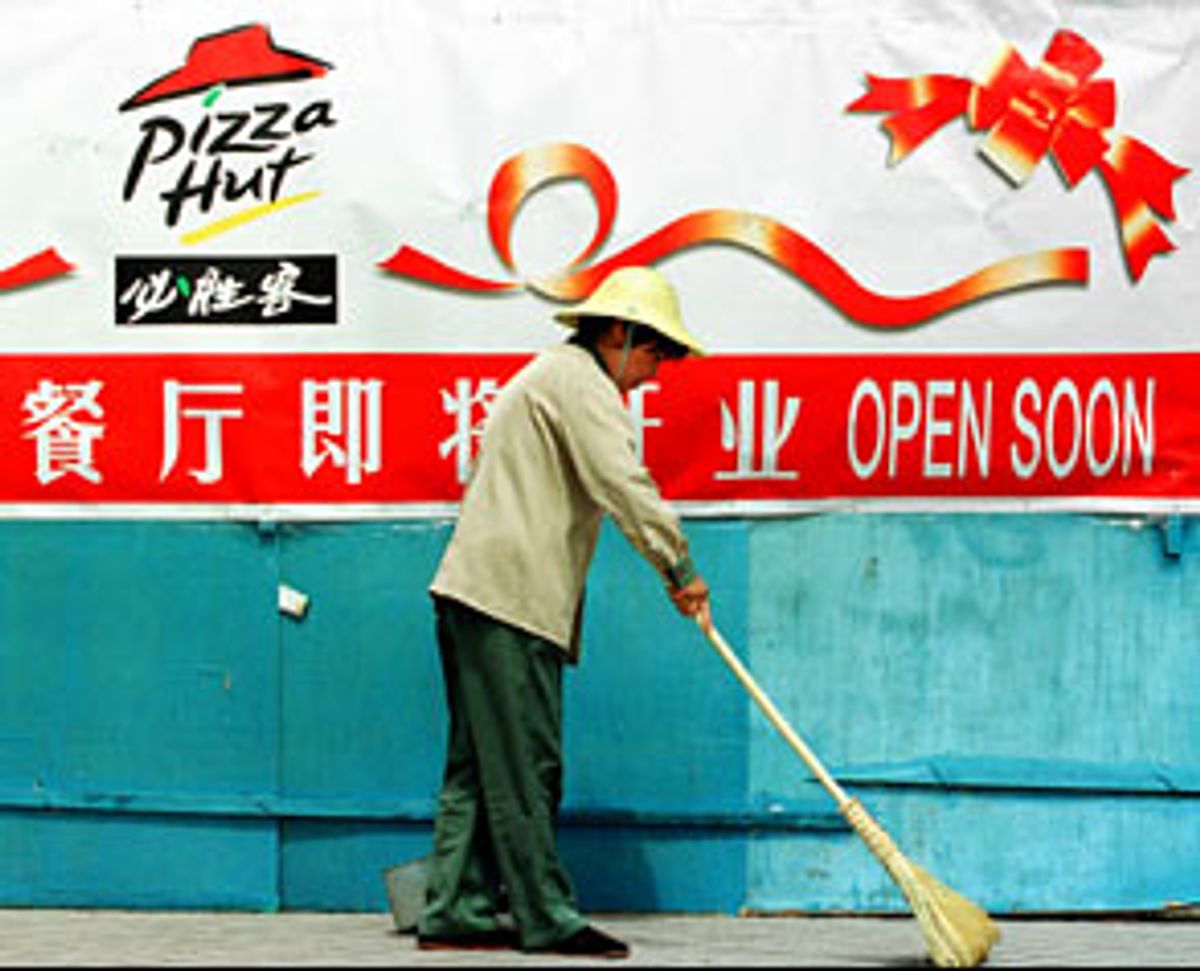 To anyone who has watched American politics for the last five years, or the last 50, the opening hour of congressional debate to grant China permanent most-favored trade status Tuesday night had to be a little disorienting. Here was Republican House Speaker Dennis Hastert, R-Ill., whose party was last heard calling for hearings on nefarious Communist Chinese plots to subvert presidential elections and nuke Los Angeles, applauding Beijing for its openness to religious missionaries like the Rev. Billy Graham's son. And here was Rep. Bernie Sanders, I-Vt., embracing the American Legion for its opposition to the China trade deal over national security fears.

If this all seems confusing, that's because the China trade bill -- which edged to passage Wednesday evening in the House by a close but comfortable 237-197 margin -- left in shreds the conventional scorecard of Republicans and Democrats, liberals and conservatives, right and left. Instead, it showed a House divided between corporate and populist ideals -- between those who view globalization through the prism of Wall Street investors, and those who view the wreckage of downward pressure on wages and the environment.

The ability of the lame-duck Clinton White House to deliver credibility had become a central subtext of the debate's final days. President Clinton has been frequently criticized for lacking a foreign policy, yet his commitment to unleashing corporate global trade forms the single most consistent theme of his presidency, from the early battle over NAFTA to his victory on permanent normal trade relations Wednesday night.

The China trade bill led to the most divisive congressional debate since the Persian Gulf War despite the fact that, on paper, its actual impact is more symbolic than substantive. The Clinton administration sought the so-called PNTR for China in order to eliminate the annual congressional reviews of China's most-favored-nation trading status and put Beijing on equal footing with countries in the World Trade Organization. But those annual reviews could not prevent China's entry into the WTO, which became all but certain after Beijing concluded an agreement with the European Union last week. If the House had refused to extend PNTR, Beijing's inevitable WTO membership would have given the Chinese the option of subjecting American corporations doing business in China to tariffs -- a potentially retaliatory measure that could be used against Congress if it threatened any future review. And anyway, in all the years that China's trading status has been subjected to congressional review, Congress has shown little inclination to punish China and never removed Beijing from its list of most-favored trading partners.

Yet, even if it is largely symbolic, this is symbolism with bottom-line impact. Corporate lobbyists like the U.S. Chamber of Commerce understood it well enough to pour hundreds of thousands of dollars into this week's debate. And the bill's proponents in Congress understood the symbolism enough to, at times, lie boldfacedly. The powerful House Ways and Means Committee Chairman Bill Archer, R-Texas, for instance, claimed that rejecting PNTR would mean "severing economic relations" with China, as if a modest annual review of the country's human-rights record was the last step before a full-blown embargo. Democrat Marion Berry of Arkansas dangled China's "growing demand for products," conveniently ignoring the average annual Chinese wage of $108.

In fact, in the debate over globalization, symbol and substance are increasingly indistinguishable. Nike, for instance -- as Canadian writer Naomi Klein points out in her recent book "No Logo: Taking Aim at the Brand Bullies," spent the last decade transforming itself from shoemaker to "swoosh" -- recently threatened to end its sponsorship of Brown University sports teams after the school voted to deny contracts for its souvenir-logo apparel to companies that resist inspection by a workers' rights advocacy group. The dollars-and-cents of Brown's sweatshirt contracts would need to be measured under an electron microscope. But what Nike feared from Brown is exactly what corporations pouring millions into lobbying Congress this week fear from continued congressional review of China: a cascading debate, an annual stage for reopening the whole question of how to regulate globalization.

The symbolism of the China trade bill was even more substantive for the AFL-CIO, which made lobbying against the measure its key legislative priority. Labor hoped that after Seattle, public opinion against globalization could swing the debate its way. And recent history was on the AFL-CIO's side: In 1997 and 1998, Congress defeated so-called "fast track" trade authority for the president.

Yet the China trade debate failed to catch fire in the public imagination as the successor to the protests of Seattle and Washington. The story stayed off the front pages of major newspapers for most of the week, and on Sunday night, the White House canceled an address by President Clinton for fears of raising the issue's profile.

Yet the China trade debate failed to catch fire in the public imagination as the successor to the protests of Seattle and Washington. The story stayed off the front pages of major newspapers for most of the week, and on Sunday night, the White House canceled an address by President Clinton for fears of raising the issue's profile.

Why did PNTR fail to act as a political lightning rod? In part, the reasons were purely pragmatic. PNTR's opponents entered the debate with a weak hand: Not only could corporations outspend public-interest advocates by a massive margin, but the AFL-CIO had already endorsed Vice President Al Gore, and has committed itself to regaining a Democratic majority in the House. Democrats and liberal members of Congress, like staunch trade-unionist Joe Moakley of Massachusetts, knew they could support Clinton's trade bill without, in the long run, sacrificing labor support.

But at the same time, the AFL-CIO and its president, John Sweeney, suffered a failure of nerve about the terms of debate, retreating from the broad discussion of globalization that exploded after Seattle to narrow rhetoric about protecting American jobs and national security.

The final debate that unfolded Wednesday was only occasionally a great forum for discussing globalization. Instead, to the discredit of PNTR's opponents, it was too often dominated by the crudest China-bashing, a combination of yellow-peril and McCarthy-vintage anti-communism, with only scant relationship to reality.

Some of this was inevitable given the particular Republican opposition to PNTR, based in a faction of the GOP dedicated to the creation of external enemies: The wild Dan Burton, R-Ind., for instance, declared that Beijing was one step away from "controlling" the Panama and Suez canals.

But conventional liberal Democrats and the AFL-CIO's lobbyists, too, decided that demonizing China had the best political currency. Rep. Rosa DeLauro, D-Conn., wife of Democratic pollster Stanley Greenberg and a close labor ally, devoted her three minutes Wednesday afternoon not to discussion of job loss in her deindustrialized district but to China's "belligerence toward Taiwan" and its purported nuclear threat.

One result of such rhetoric -- raising international tensions while doing nothing to educate the public about globalization -- was to alienate potential allies in Asia. The campaign's anti-Chinese focus, complained influential Filipino sociologist Walden Bello, director of the Bangkok, Thailand, think tank Focus on the Global South, "splits a progressive movement that was in the process of coming together in its most solid alliance in years." The debate's rhetoric also misled the public about the nature of China's genuine abuses, which are internal and not about global empire. Asia scholar Chalmers Johnson, head of the Japan Policy Research Institute and author of "Blowblack: the Costs and Consequences of American Empire," points out that China has no deep-water navy, possesses one-seventh the nuclear warheads of the United States and has a smaller defense budget than Japan.

And it divided labor, too, from American farmers, who see in China a massive potential market for soybeans and corn. In fact, by settling into a comfortable and narrow protectionist corner, the AFL-CIO placed itself in the weakest possible position. It undermined the labor-endorsed presidential candidate, leaving Gore standing with awkward ambivalence between his commitment to trade and his commitment to labor. (He ended up looking no more decisive than he did during the Elian Gonzalez drama.) And it failed to lay the public-opinion groundwork for future debates on globalization.

The outcome of Wednesday's symbolic debate will be most significant for factory workers and farmers on both sides of the Pacific. In pressing the bill forward, President Clinton recently described it as "a one-way street" that would open Chinese markets to United States products and expand China's economy at no cost in American jobs. But instead of being about American jobs vs. Chinese, there's substantial evidence that unbridled Chinese trade will be a lose-lose proposition for both nations. China has a permanent army of 55 million unemployed transients, virtually guaranteeing that wages will remain low into the foreseeable future -- sucking jobs not just from the United States but also from Third World countries.

"We're not going to be selling anything over there," predicted Rep. Louise Slaughter, D-N.Y., pointing out, in one of the few moments of clarity in the debate, that with an average annual wage of $108 China will hardly be a likely mass market for American-made consumer goods.

"It will continue the hollowing out of American industry," Chalmers Johnson forecast. Johnson made another equally chilling prediction: At the same time that American jobs are lost, the whole invasion of China by American agribusiness "will disrupt Chinese agriculture in the most profound way. People who grow soybeans and rapeseed for canola oil and other basic products will be wiped out by U.S. imports."

It's what comes next, the global lose-lose formula described by Johnson, that explains why this week's debate scattered and exploded the usual alliances. Standard political language, the language of presidents who spend their lives winning elections and wars, has no capacity to describe a race without winners -- a race for which Wednesday's vote provided the starting gun.