Jackie Chan's latest teams him up in 1880s America with Owen Wilson -- and gives a giddy glimpse of what he'll be doing after he gets too old to do his death-defying stunts. 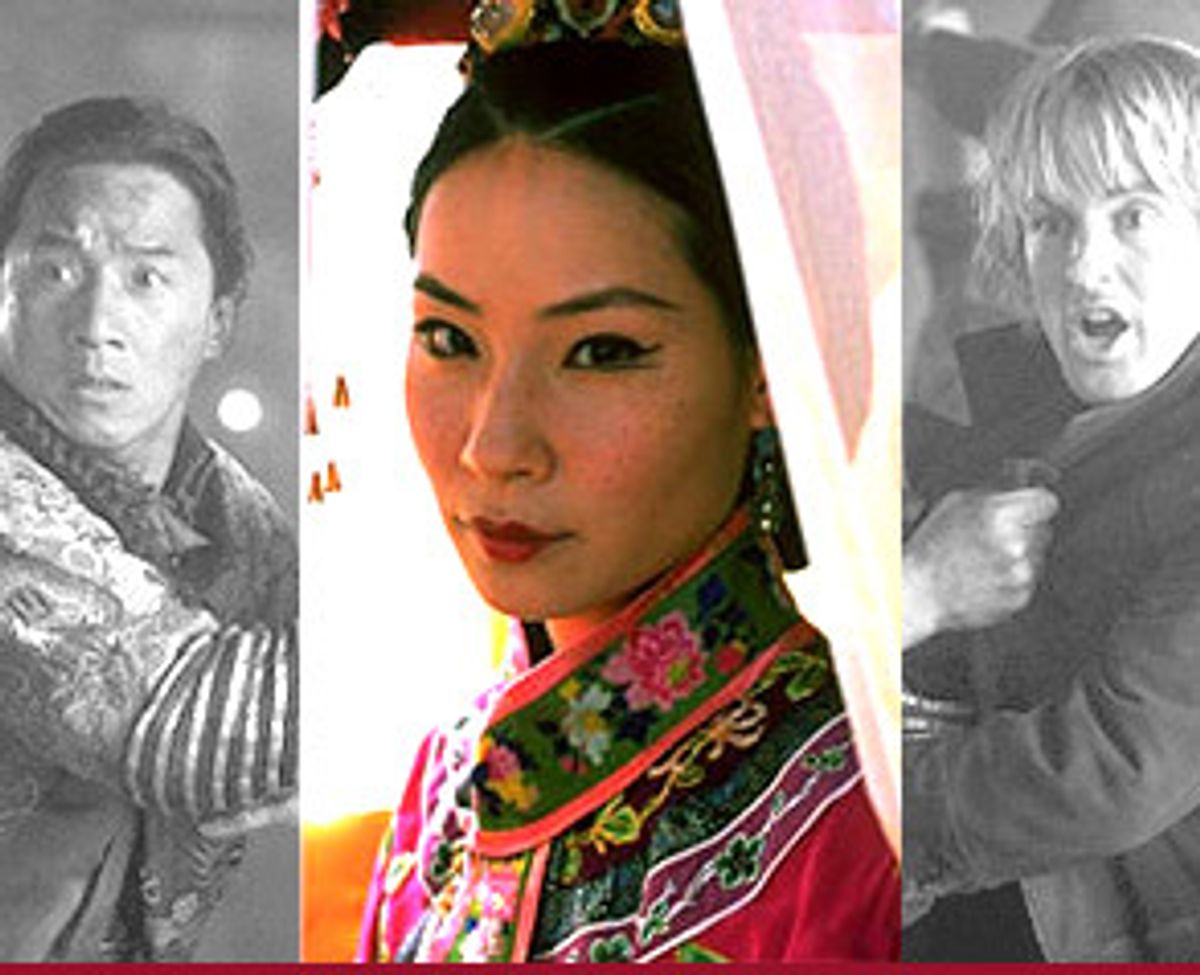 There would be nothing so depressing as seeing a supremely talented physical actor like Jackie Chan trying to top himself with each successive movie. Chan is getting older, and the outlandish (not to mention dangerous) stunts he has pulled off so casually in the past aren't going to be within his grasp forever.

But if Chan's career as a crazy-genius stuntman is on its way to reaching its natural limits (he's in his mid-40s), "Shanghai Noon" shows that he's nowhere near exhausting his potential as a charmer. "Shanghai Noon" is a goofy action western that's perfectly enjoyable for the two hours you spend watching it and, mostly, perfectly forgettable in the two hours afterward. But the memory of Chan's performance is likely to stick around a bit longer. At the very least "Shanghai Noon," with its clutch of silly but fun one-liners, gives us a glimmer of what Chan might be able to do once he chooses to (or, heaven forbid, is forced to) stop jumping onto or off moving trains, leaping off the tops of castles, swinging across gorges on ropes and so on.

Chan plays Chon Wang, a Chinese imperial guard circa 1881 who's smitten with the luminously beautiful Princess Pei Pei (Lucy Liu, in a performance that's so low-key and calmly centered that it barely registers). When the princess is kidnapped from China's Forbidden City and taken to the United States, Chon tags along with the guardsmen sent to rescue her. Traveling to Nevada by train to deliver the ransom, he meets train robber Roy O'Bannon (Owen Wilson) and his band of ne'er-do-well accomplices. Chon manages to derail the robbery, and he and Roy go their separate ways. Chon hooks up with a group of Crow Indians, but he and Roy meet again in a barroom brawl, after which they both become fugitives from the law, on the lam together.

Chon never forgets about saving his princess, but occasionally we do. "Shanghai Noon," director Tom Dey's feature debut, suffers from the same excesses that most contemporary action movies do -- problems that have become so commonplace that most audiences don't even notice them. The action isn't shot cleanly; it tends to be manic and cluttered, and in the train-robbery sequence in particular, as the action moves from car to car, it's impossible to tell who's going where and why. All we know -- and all we need to know, apparently -- is that a safe is about to blow. Even so, "Shanghai Noon" moves along smoothly enough. Dey and cinematographer Dan Mindel know enough to give us a clear view of Chan's stunts, which are the main attraction after all.

Alfred Gough and Miles Millar don't write much of a story around those stunts, and there are crucial characters who simply fall by the wayside. (A Crow woman who saves Chon's and Roy's butts more than once is treated as little more than a convenient device for moving the plot along.) But Gough and Millar pepper the story with enough silly gags and droll one-liners that it's easy enough to stay alert between Chan's chest kicks and balletic twirls. Some of the jokes are just plain ridiculous: A horse drinks down a whole bottle of hooch, with predictable results. But others have an oddball, throwaway spark, as when a Nevada pioneer wife comments to her husband that the Chinese guards sure don't look like "Injuns," to which he replies indignantly, "That's because they're not Injuns -- they're Jews."

Owen Wilson, with his beach-bum blondilocks and perpetually slack jaw, has the potential to be supremely annoying, but he's remarkably endurable here. He knows just what to do with his lines, channeling a kind of New Agey, know-it-all dopiness to get laughs. When he learns Chon's name, he repeats it to himself as "John Wayne." "That's a terrible cowboy name!" he blurts out incredulously, with the kind of cocksure certainty that only the truly clueless can muster.

But "Shanghai Noon" is, after all, Chan's movie. The stunts here aren't bigger or better than anything he has ever done, but that doesn't make them any less impressive, or any less pleasurable. Chan isn't exactly low-key in "Shanghai Noon," but I do get the sense that he's working more on showing us how refined his movements are, rather than just performing feats of derring-do. That's exactly as it should be: Chan has already proved himself as a fearless performer. That kind of precision can be put to use for the rest of his life in gentler, but no less entertaining, types of physical comedy.

It's simply a pleasure to watch Chan move. I winced in a sequence where he falls down the shaft of a tall bell tower, getting bumped and bruised along the way, because although I recognize that kind of exploit as a symbol of his deep commitment to what he does (not to mention his tolerance for pain), I think he's cut out for much finer work. His physical grace never ceases to amaze me: One segment of the movie's climactic fight scene, featuring a combination of hand-to-hand combat, spears and nunchuks, is choreographed as beautifully as anything in an old MGM musical. (Again, the movie's visual noise is a distraction, but the bare perfection is there in the movement nonetheless.) In another sequence, Chan fastens a rope to a horseshoe, which he then proceeds to use as a weapon against assorted baddies. But he doesn't just swing it -- he whirls it around his own body at lightning speed, and then twirls himself around to send it flying. Another of his neat tricks involves removing articles of clothing from his opponents with lightning-fast sleight of hand. (And all you hear is a gentle whoosh.)

Those sequences are inventive and arresting pieces of work, but they're also relatively subtle ones. As much as I've thrilled to some of Chan's spectacular feats in the past, it's a relief to see him doing more with less. Even in a world where great-looking middle-aged actors are the norm, he looks spectacular here, with his long, leonine hair. His English is still far from perfect, but his timing and judgment are good. When he was younger, his grin often struck me as a little forced, but now his smile, a perfect half-moon, has a natural radiance instead of an electrocharge.

And there's more dignity in the way he moves than ever before. "Shanghai Noon" hints that Chan is poised to become an even better physical comic than he is now, as long as his fans are willing to accept less flash from him. Older bones are so unforgiving. Let's hope movie audiences are more flexible.