Hollywood raises the curtain on its annual money-spinning event, but this year's model looks awfully thin. 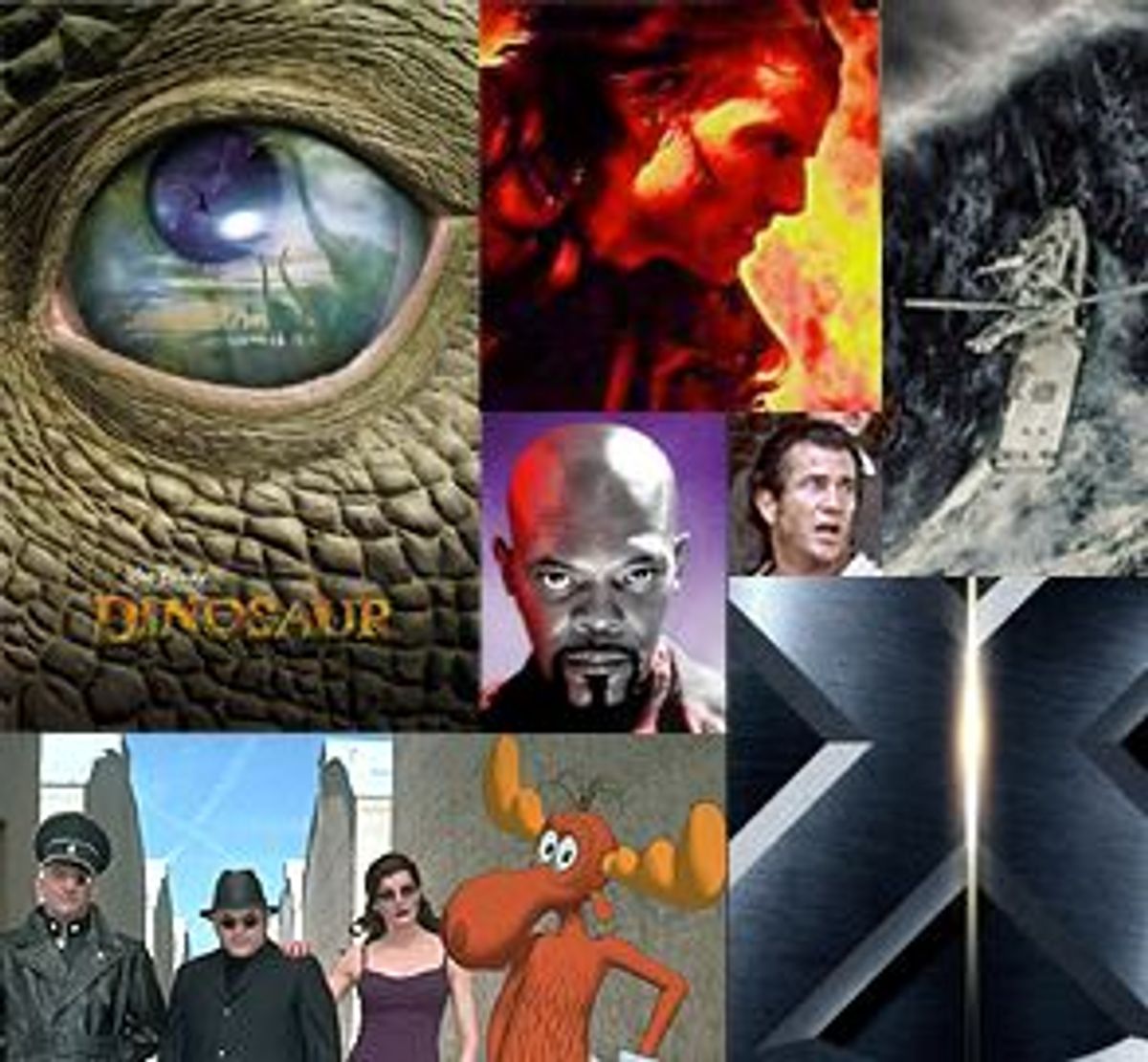 They call it June gloom and it's already arrived in Los Angeles. Every morning, low-hanging clouds blanket the city, effectively delaying the onset of summer for another month.

That hasn't stopped Hollywood from getting started.

Of course, that's not how Hollywood sees things. Between the bookends of Memorial and Labor Day weekend, the industry rakes in 40 percent of its annual box-office gross. Luring moviegoers with the promises of shiny, upbeat entertainments is a matter of fiscal necessity. "This one is the best ever," promised Walt Disney Motion Pictures chairman Richard Cook a few weeks ago at Hollywood's El Capitan Theater. Cook was hosting Disney Summer Heatwave 2000, an exhibitors-only sneak peak at the studio's summer slate, complete with dancing chorus girls and boys. A few hours later, after a high-decibel screening of "Gone in 60 Seconds," a smash-'em-up action movie about a bunch of car thieves starring Nic Cage and (all too briefly) Angelina Jolie, a few theater owners could be seen hurrying nervously onto Hollywood Boulevard, eager to assure themselves that their own vehicles hadn't been molested.

For all the promise of large summer paydays, Hollywood has reason to be apprehensive this year. "Everything's up for grabs," admits one marketing executive. Last summer, the entire free world knew that "The Phantom Menace" would single-handedly create a record summer. Despite a critical drubbing, it managed to make $431 million.

This year's entries won't come close to duplicating that achievement. "M:i-2" is the closest thing to a sure hit: In recent weeks, Tom Cruise has been flashing his teeth and regaling grateful interviewers with tales of death-defying stunts. The pump-primed "M:i-2" grossed $12.5 million on Wednesday, its first day of release, putting it on track to pick up as much as $90 million over the coming weekend. On the other hand, if there is a sleeper bonanza like last summer's $294 million "The Sixth Sense" slumbering among the class of 2000, it has yet to stand up and be counted.

Just shy of June, the carcasses of movies that died trying to jumpstart the season already litter the highway. John Travolta's stupefying "Battlefield Earth" provided the most spectacular flameout. After two weekends of release, the sci-fi dud has barely scratched together $18 million. Nouveau-producer Elie Samaha (flatteringly profiled in a recent New York Times Magazine article) boasted that his movie would break even if it grossed $35 million, thanks to the presale of foreign rights. That rings flat now. "Earth" will be lucky if it manages to sell $25 million in tickets, which won't even pay for its prints and advertising. (Goodbye sequel.) And it's not even the biggest corpse in town: While "Earth" was noisily self-destructing, Kim Basinger's "I Dreamed of Africa" quietly slipped into oblivion. In its first three weeks, the $35 million safari dropped off the charts with just $6 million in the bag.

No wonder Hollywood has the flop sweats. The real risk behind making summer movies is the cost of launching them in an overcrowded market. In 1999, the average cost for prints and advertising was $24.5 million per movie; for a summer flick that figure can easily spike to $50 million to $60 million. Disney's production tab for "Dinosaur" amounted to anywhere from $130 million to $200 million (part of which will be charged to the expense of ramping up Mickey's new CG-animation unit, the oddly-named Secret Lab). From "Gladiator" through "M:i-2" to Mel Gibson's "The Patriot" and "The Perfect Storm," dangerously huge budgets are commonplace. (The high-priced advertising real estate on NBC's must-see season finales last Thursday was chock-a-block with pricey pitches for the upcoming summer fare.)

The game gets riskier: Many of the biggest summer movies are rushed from the editing room straight to the screen with little time for fine tuning. In order to satisfy press deadlines, "M:i-2" and "The Perfect Storm" were shown earlier this month to junketeering media types before final touches like score and effects were even ready. Two summers ago, "Godzilla" director Roland Emmerich watched his completed movie for the first time -- with an audience -- at its Madison Square Garden premiere. "We would never do that again," he told me. "It was unfortunate we locked ourselves into that schedule."

With so much on the line, Hollywood opts for familiarity over novelty: the 2000 summer lineup is depressingly jammed with the usual suspects: sequels ("M-i:2," "Nutty Professor II: The Klumps"), also-rans ("The Flintstones in Viva Rock Vegas"), pop-cult franchises ("X-Men," "The Adventures of Rocky and Bullwinkle"), remakes ("Shaft," "Bedazzled," "Gone in 60 Seconds") and quasi-remakes ("The Hollow Man," director Paul Verhoeven's "Invisible Man" riff and "Coyote Ugly," producer Jerry Bruckheimer's "Flashdance" reprise).

If they're lucky, a couple of these movies will tap into the prevailing cultural backwater and become more than just the sum of their audience-tested parts. "Gladiator," the season's first $100-million-plus hit, seems to prove that old wine -- in a spiffy CG-augmented bottle -- sells. "Gladiator's" success may also have something to do with the fact that it unwittingly conjures up Zeitgeist-friendly allusions to John McCain (ex-military leader shuns politicians) and the WWF. That bodes well for "The Patriot," which features Mel Gibson as another battle-wizened veteran of the bloody French and Indian War. Tough guy Mel gets pushed too far, and there's trouble.

Meanwhile as the contest shapes up, other movies are being yanked from the schedule altogether: After viewing a rough cut of Robert Redford's metaphysical golf tale, "The Legend of Bagger Vance," DreamWorks pushed its August 4 opening back to Nov. 3 (preferring to reposition it as a possible Academy Award contender). "We debated release dates," admits Walter Parkes, DreamWorks Pictures co-head. "It just felt as if it would do better during the holidays than during the dog days of summer." Miramax -- whose release schedules are always in a state of highly unpredictable flux -- decided to postpone till the fall both "Bounce," its Ben Affleck/Gwyneth Paltrow flick, and "The Golden Bowl," its latest Merchant/Ivory gloss on Henry James, which debuted to a ho-hum reaction at last week's Cannes Film Festival.

Adding to the palpable behind-the-scenes anxiety is the fact that high-profile summer movies can make or break a studio regime. In 1993, when "The Last Action Hero" fizzled, it was only a matter of time before Columbia's then-chairman Mark Canton was sent packing. Two summers ago, D.O.A. movies like "Fear and Loathing in Las Vegas" marked the beginning of the end for Universal Pictures chairman Casey Silver. This year, Sony Pictures is the studio most in need of a hit. Chairman John Calley and his heir apparent, Columbia chairman Amy Pascal, have already released the year's two biggest still-births: Gary Shandling's "What Planet Are You From?," which opened -- or, more correctly, failed to open -- to a miserable $3 million; and the aforementioned "Africa," which did even worse, taking in just $2.4 million it first weekend.

Still, nobody said the summer movie business is a day at the beach. Actually, it's more like a scene out of "Dinosaur." A pack of lumbering behemoths desperately trudge across the desert searching for a box-office oasis. By mid-July, the body count grows, and the species appears headed for extinction. Then one or two survive, and the whole march begins again.

Call me when it's fall.