"Half Empty, Half Full"

While optimism may seem a sunny subject, full of hearts and flowers, it's a weapon in Susan Vaughan's hands. 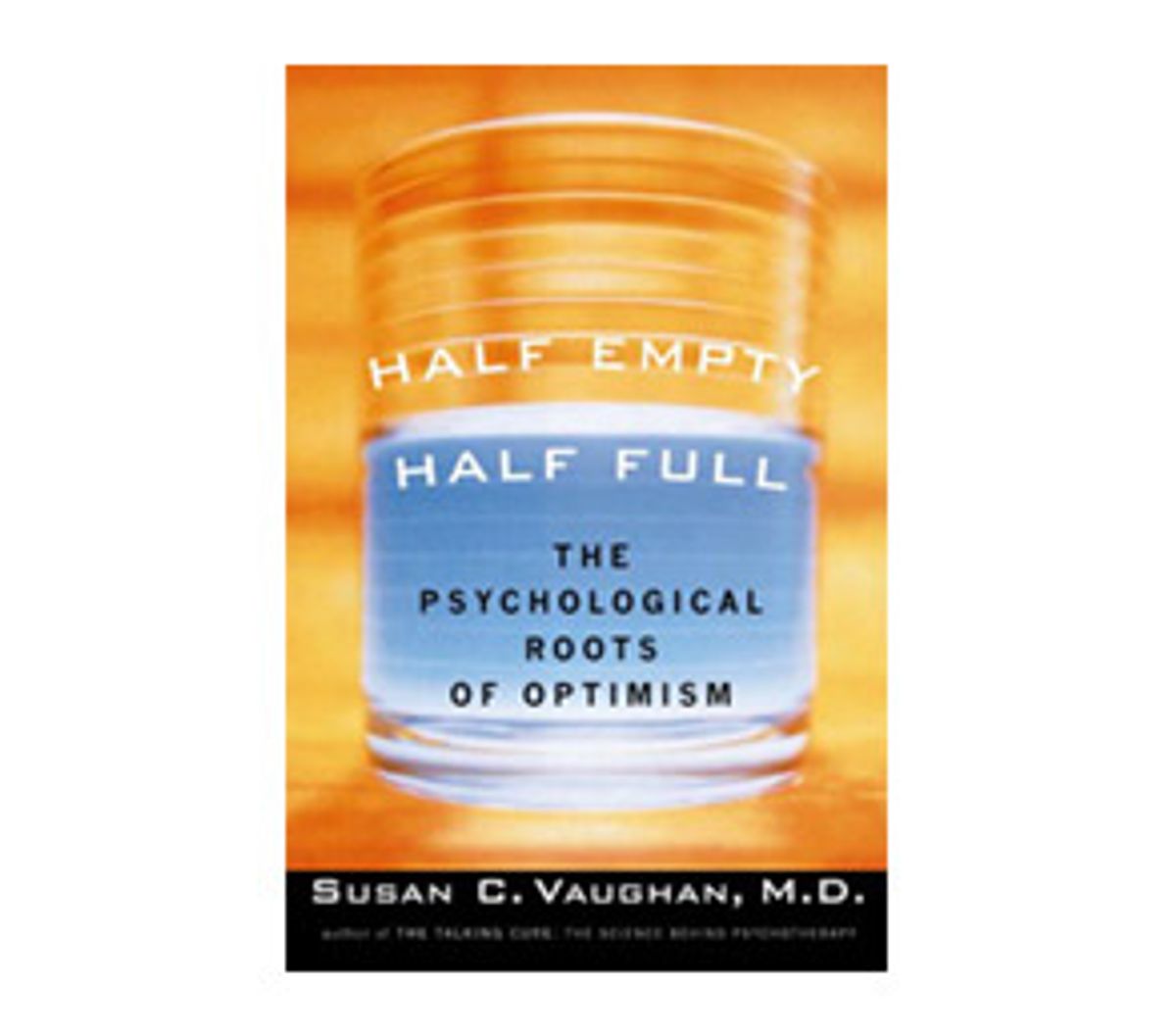 Half Empty, Half Full: The Psychological Roots of Optimism

Dr. Susan Vaughan's new book, "Half Empty, Half Full: The Psychological Roots of Optimism," left me with some lingering questions. Such as: If I were an optimist, would I have thought this was a good book? Given a more optimistic outlook, would I still regret the several hours I spent reading it? Is it evidence of my incorrigible pessimism that I find this book so useless?

I'll put aside these musings for the moment, and attempt to review the book as objectively as possible (an endeavor Vaughan would regard as futile, but more on that later). As far as my hopelessly clouded vision allows me to see, Vaughan appears unwilling or incapable of making a sustained argument, something she did to great effect in her excellent 1997 book, "The Talking Cure: The Science Behind Psychotherapy." In her new work, however, she sidles up to an argument, shies away and then approaches again without ever posing a question, let alone reasoning her way to an answer.

That's unfortunate, since there's much to be said about our infatuation with genetics and how it's distracting us from good, gray environmental influences, less sexy these days, but still crucial to the development of traits like optimism or pessimism.

But this and all the rest of the book's flaws -- its painfully mixed metaphors, its phony case studies, a font so enormous and ideas so puny it resembles a large-print Reader's Digest -- recede next to its utter lack of a moral sense. Though optimism might seem a sunny subject, full of hearts and flowers, it's a weapon in Vaughan's hands: optimism by any means necessary. These means include overpraising yourself for your successes, shirking responsibility for your failures and comparing yourself to others less fortunate in order to feel superior. "Although those with a so-called optimistic style are clearly distorting reality," she concedes, they are doing so "in the service of maximizing their sense of well-being, bolstering their self-esteem and enhancing their illusions of control."

Oh, so it's OK, then. As voiced by Vaughan, there's really only one problem with mental habits like "downward comparison": "If I constantly look for others who are worse off and use their misery to bolster my sense of self," she asks ingenuously, "how do I keep from feeling guilty?"

Aside from these exercises in self-indulgence, there's little here that psychologist Martin Seligman didn't say better, and earlier, in his 1991 book "Learned Optimism." Much of her report on optimism research has a half-hearted feel, as if the author, an assistant professor of psychiatry at Columbia University's College of Physicians and Surgeons, could not interest even herself in what is largely a retread of familiar work.

Vaughan borrows shamelessly from Seligman and others, in fact, all while promoting what she calls "my" new theory of optimism. Her looting reaches criminal proportions in Chapter 8, which hijacks Jean-Dominique Bauby's book "The Diving Bell and the Butterfly" -- ostensibly to show "a master illusionist in action" but really, it seems, to quote long passages and thus save the author some exertion. The scheme backfires, as Bauby's beautiful prose only calls attention to Vaughan's lazy writing and ham-handed analysis. (We got a sense of her critical faculties earlier in the book, when she asserted that optimism allows people "to do remarkable things, like the musicians on the Titanic who played while the ship sank, neither minimizing the very real danger that they faced nor succumbing to inner terror." Any therapist who thinks those doomed musicians were motivated by optimism should have her license revoked immediately.)

For sheer fatuousness, however, these sections can't compare to the ones concerning Vaughan's "patients." I use quotes because I -- unlike, presumably, most readers of "Half Empty, Half Full" -- bothered to read the acknowledgements page, with its confession that the case studies discussed herein are "fictional." I suppose we should be grateful that Vaughan made this admission in an early, albeit little-read, section of the book; in Susie Orbach's latest, "The Impossibility of Sex," the author saves the same disclosure for the very end.

Apart from the dubious ethics of inventing figures in a nonfiction book (can we get someone from Brill's Content on this, please?), the real problem is that these characters are so miserably colorless and contrived. Michael, Robert, Jill: Not a single detail sticks to them, not a single utterance rings true. This falseness is especially apparent in their "dreams," which are patently the product of a conscious, and none too imaginative, mind.

My favorite concerns "a Danish hair conditioner that was made with beer," which "Isabel," a recovering alcoholic, dreams that she tries to purchase at a drugstore, even though the bottle is only half-full. The cashier won't sell it to her without I.D., and instead advises her to make it at home.

Enter Vaughan, triumphantly connecting the dots she drew herself: Isabel feels empty inside, and is searching for a substance that will make her whole. "She did use beer as a kind of internal mood conditioner for years," Vaughan sagely observes. "And now she has given it up, but there's nothing yet to replace it. So her inner state feels tangled and snarled." The patient can't smooth out her emotional problems without I.D. (i.e., a strong sense of identity), and that's something that she can't buy, but must create for herself. Get it?

Vaughan soon ushers "Isabel" and the others into the world of the aggressive optimist, where personal comfort is placed above all other values and virtues and the rest of humanity is a mere foil for our state of mind. We should all learn "to harness other people's emotional reactions in a manner that positively affects our moods," Vaughan advises, "as when we bounce a smile or a friendly attitude to them and, most often, they return it, sometimes magnified, to us." But this exchange "works in both directions," she warns, and "that means that you may want to think twice before cursing at that cab driver and unleashing his stream of abusive and angry comments, with its ability to adversely affect your mood."

Another real bummer, according to Vaughan, is thinking too much about life and death and stuff. Since the contemplation of "our fundamental helplessness and lack of control in the face of an indifferent universe, our elemental aloneness, our failure to achieve successes that can change the basic parameters of our mortality," may lead to "despair, depression, even suicide," it's much better to maintain the illusion that we're totally in control of a faultlessly happy life that will go on forever. (Sardonic humor, good Scotch and Samuel Beckett are not mentioned as alternative coping strategies.)

Having neatly summarized our existential dilemma, Vaughan hurries on to more pressing topics, like the effect of optimism on basketball games won and insurance policies sold. And in truth, it does seem clear that an optimistic mindset -- as upbeat as temperament or events will allow -- is the best way to get through day-to-day life. As the basis of a philosophy or a worldview, however, optimism is absurdly inadequate, as Vaughan's final chapters reveal.

In her ultimate formulation, our state of mind doesn't just determine how we perceive things. It determines how things actually are. "There is no 'real' reality," Vaughan assures us, "just the one that our minds construct by percolating the experiences we have through the lens of our mood of the moment." Pessimistic people have one "reality," optimistic people another -- and given the choice, wouldn't you pick the latter?

Here it is, the cosmology of the unthinking optimist: Other people are distant planets or reflecting moons; reality lacks any gravitational pull; and in the center spins the self, the blinding sun around which all else revolves.

It's a nice place to visit, but I wouldn't want to live there.

It's a nice place to visit, but I wouldn't want to live there.

Annie M. Paul is a writer living in New York.