Surprise! Women like receiving oral sex (almost) as much as men do. 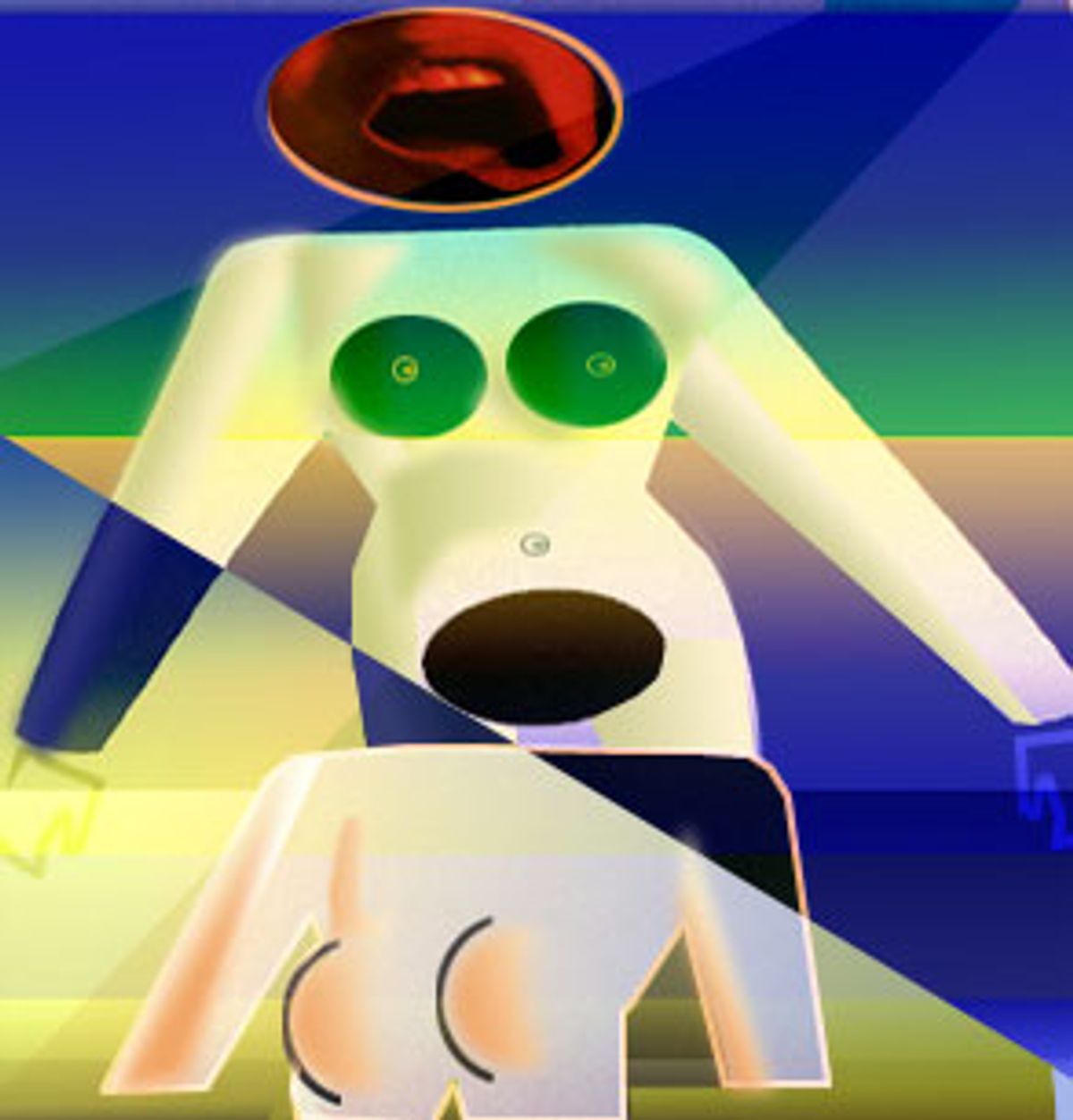 A few weeks ago in this space, "Dylan Edwards" extolled the virtues of "snacking." His message to my gender: We love eating you out, so lie back and let us. Not fighting words, no, but nevertheless only one side of the oral issue. For balance, I asked a small sample of women to weigh in, to provide the vox snax.

In fact, Edwards and his friends seem too good to be true. They are in favor of the oral-sex component that's lacking from our Frankenboyfriends and Frankenhusbands. Did these guys burst full grown from Eve Ensler's, um, forehead, never once thinking it was gross, or at least obligatory?

Memories of hearing for the first time that people put their open mouths on either kind of genitalia were disturbing to most of my interviewees. I remember my first friend to get eaten out telling a rapt audience of 14-year-old girls that it felt great, "but when he kisses you afterwards, you taste it." We all squealed in horror.

We got over it. My sample (10 ladies ages 28 to 45, interviewed orally or by e-mail) can't imagine sex without giving and getting head. And despite what the male doctor in Edwards' article says, we haven't generated "negative stories" about our pussies just because they're neatly tucked away. We've squatted over the mirror and we were not overcome by penis envy or hysteria or existential terror of the swampy void. We're happy but realistic about the groceries we sit upon.

Edwards rightly acknowledges longtime misogyny when he urges women to "overcome outdated ideas of their own bodies." But even vagino-positive womyn don't need a weatherman to know which way the wind blows. We're the ones who go through childbirth and get yeast infections and bleed for five days without dying. Let's face it, it can get funky down there. We'd probably worry about "freshness" even without those TV ads.

Men, it seems, are less finicky than women, and we snacks couldn't be happier. Peaches writes that "guys did it during my period, even after I warned them they should avoid the area! It must be a macho thing in some way." Most of the others have been snacked on while on the rag (a practice known in some circles as "Buffalo winging"), with Little Debbie an adamant exception. She needs to "be recently bathed" to let a guy go down, though nobody's ever disparaged her smell or taste.

Strawberry was one of the only interviewees to have had hygiene guidelines imposed on her. Her college boyfriend "would only eat me right after I showered," she writes, "and once we'd screwed, I was inedible until my next shower. I teased him that he'd prefer me boiled for complete sterilization, which became our shorthand: 'Are you boiled?' 'It's safe, I'm boiled.'"

A few snacks in my survey have gone down on other women, but they were frustratingly vague about the experience. Greek Salad once asked her muff-loving boyfriend if it really tasted like fish. "He got all mad and said, 'No, it's like feta cheese and olives,'" she says. "And he loved feta cheese and olives. That completely reassured me, that he liked the food it tastes like."

Rainbow Pop, 44, gets her snack name from the Rolling Stones song about the girl "who comes in colors everywhere." In answer to the types-of-orgasm question, she writes, "Strictly clit for me on oral sex and intercourse, what I'm assuming is vaginal for self pleasuring." She goes on to explain the latter -- she can come just by crossing her legs. "I'd have orgasms during exams in college if I got too tense." She first discovered this no-hands trick at 14, sitting on a rumbling clothes dryer reading "Lady Chatterley's Lover."

The most fascinating orgasm reports come from the survey elders. This confirms my hunch that not only do girls mature faster than boys, they keep developing for years longer. Sexuality floods the minds and bodies of teenage boys, who spend the rest of their lives managing their diminishing resources as efficiently as possible. With women, the sexual data trickles in slowly; our bodies keep figuring stuff out year after year.

Honey, a sexually experienced 28, worries, "Maybe I've never had an orgasm, ever! Maybe what I think is an orgasm isn't one at all!" She's pretty sure she had vaginal orgasms with a well-endowed ex, but says that, usually, "fingers work better than the dick. And I dig oral sex, but I can get incredibly self-conscious about it -- and tense, which makes hitting the 'O' orally a bit difficult."

Peaches, 45, writes, "I can come from oral sex more readily with someone I'm not in big love with. If I don't care as deeply about the guy, I can have a clitoral orgasm easily if they are good at it. But if I'm really in love both physically and emotionally, it feels like a less 'full' kind of sex and I prefer intercourse and a simultaneous orgasm."

In his article, Edwards assured women that oral sex isn't just an "on-ramp" to intercourse. But every lady in my survey wants that merge. Several like a guy to get them almost there with his tongue and then try for simultaneous coital orgasm. Others want to come and then fuck, but everyone, even the bisexuals, prefers the lick 'n' dick over all other combos. Tea Cake says, "I'd find it very hard to not eventually drag him up by the ears."

Male sexuality is comparatively straightforward, but that doesn't mean we know what constitutes a good blow job. Fear of the unknown kept Truffles from sucking for years. "I was completely socialized to how fragile the penis is, from seeing boys who got hit in the nuts writhing on the floor in incomprehensible agony," she says. "So I had performance anxiety; I thought 'if I don't do it, they won't know I'm bad at it.'"

At 32, however, she says, "Now it's less foreign, I'm more confident, so I'm beginning to like it." Strawberry, 40, describes a similar evolution. "Growing up, I associated blow jobs with desperate fat girls. Plus I worried I did it wrong ... But then suddenly, in my mid-30s, I started liking it, even craving it and fantasizing about it."

Pop Tart, 37, calls blow-jobbing "more creative than any other sex act, like playing the oboe or cooking a souffli."

She adds, however, that it's fun only "when I give them freely, when I'm inspired, when the blow jobee seems likely to reciprocate in kind, when I'm not bullied into giving one." With a selfish lover, it's like "Run Lola Run," she writes: "You have to perform a 'job' when the recipient is whiny or unappreciative; you're running as fast as you can, out of breath, exhausted, stressed. And you're doing it all for some slacker guy who takes you for granted."

A guy friend says one of the things he likes about blow jobs is that "women like how the penis looks, that you're attracted to us." I'd like to be as reassuring to him as Edwards was to us, but surprisingly, many women don't love the look of a penis. "It's not like you hear women clamoring for more full frontal nudity in movies," Tea Cake observes dryly.

She admits her sucking is obligatory: "I worry that I'm greedy because I like getting so much more than giving. My first boyfriend loved going down on me, and we'd do it for hours, so I think karmically I owe the world blow jobs."

Little Debbie, 42, says, "I have to like a guy I go down on, but I don't need him to be a boyfriend. But to let a guy eat me out, there needs to be a relationship. A blow job isn't me being vulnerable; it's me demonstrating that I like him." Smarties says oral skill can hook a man: "I always considered it my forte, a big part of my hold over the guy."

Peaches writes, "I feel lucky that I can come from intercourse. I wonder if it does have to do with trust? I have never been cheated on or reamed by a guy, so I have this true love of men ... Maybe that has something to do with it? After all, sex is all in the brain."