Progressive teaching practices don't work as well as a traditional focus on basic skills and a rigorous curriculum. So why do we still use them? 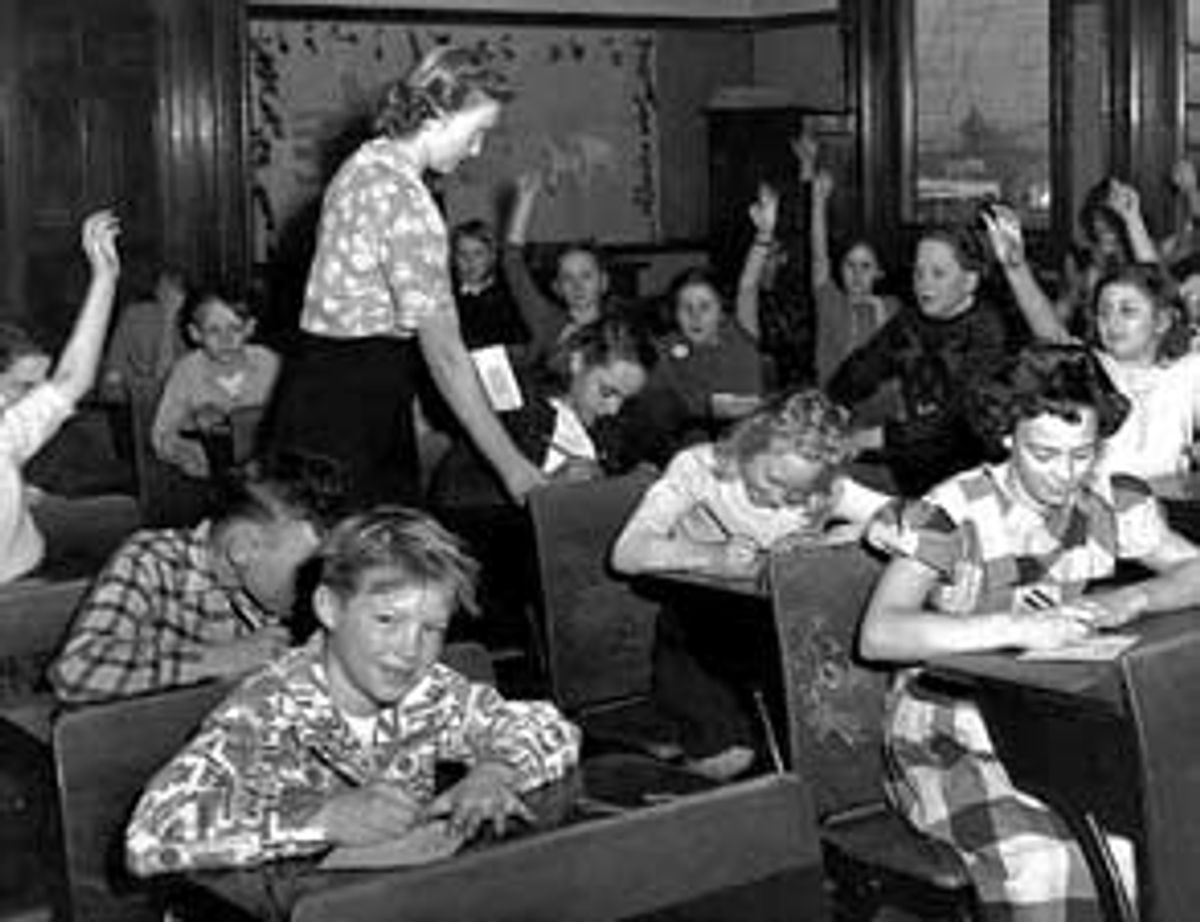 I spent several months last year visiting public schools all over the United States in order to compile a guide to what is known as "schoolwide" reform -- ambitious models for change that re-create schools from the bottom up. My favorite was the Morse School in Cambridge, Mass., which used what is known as the Core Knowledge curriculum, a highly detailed and very rigorous instructional program.

At lunch with some second-graders, I asked what they were learning in history. A boy named Michael said eagerly, "We're doing ancient Egypt, and we did China and Greece."

Michael's friend Duncan explained that the Chinese had built a series of walls to keep out intruders, before and linking them all together to form the Great Wall.

"Emperor Qin Hai," Michael said. Duncan then explained the Egyptian belief in the transmigration of souls. Both boys were able to give me a pretty passable explanation of gravity. Both seemed delighted with their own knowledge.

Half the kids at Morse are poor enough to qualify for free lunches, but in 1998, five years after the school installed its new curriculum, all grades scored at or above the national norm in math and reading. The first-graders placed third in the city in reading, behind two upper-class schools.

Several months later, I was invited to participate in a round-table discussion of school reform at Harvard. In most settings I'm an educational moderate, but among professors at the Harvard Graduate School of education I qualify as a reactionary. The prevailing attitude around the table was that schools were far too preoccupied with "assuring academic skills," that "we've gone berserk in this country with standardized testing," that we need to cultivate "emotional intelligence." Everyone talked about their favorite school; I talked about Morse. Immediately two of the speakers jumped on my comments.

Morse wasn't really a high-poverty school, they said; it was full of Asian immigrants. It wasn't the Core Knowledge curriculum that accounted for Morse's success; any school with a strong "identity," one said, would succeed. The other compared schools with specified curricula to "McDonald's franchises."

What's going on here? Why the wish to deny an obvious success?

We have known for at least the last 20 years that American children generally perform far worse than their peers in much of Europe or East Asia on a wide range of measurable academic skills, and that children in inner-city schools, specifically, suffer appallingly high rates of academic failure. The knowledge has produced a sense of national alarm; and the alarm, in turn, has provoked a great deal of research and experimentation. We know a lot more than we used to about what works. It has become plain, for example, that many of the progressive, "child-centered" practices now in favor just don't work as well as a more traditional focus on basic skills and a rigorous curriculum. In short, we know that some of the least romantic school practices work best.

But the pull of romanticism, especially on educators themselves, is very strong: We may well continue fighting the war over the classroom to the last child.

You might think progressive and traditional educational theories represent competing programs to achieve an agreed-upon goal, and that scholars would welcome signs of achievement in the same way that medical researchers welcome evidence that one cure works better than another. But you would be wrong.

Inside the educational world, these two streams of thought are viewed more as alternative moral and philosophical systems, as fighting faiths. What is mere evidence in the face of such iron certitudes?

Indeed, in "Academic Achievement Challenge," a recently published study of effective classroom practices, Jeanne S. Chall, one of the leading figures for the last 40 years in the study of the teaching of reading, points out that studies throughout this century show that "the more traditional methods of teaching reading in the primary grades (i.e., relying on phonics) result in better achievement" than more informal methods in which the child learns to recognize words and sentences through direct contact with books (i.e., whole language). She writes: "Why, one might reasonably ask, do we not accept the research findings and base our instruction on it?" The answer, she says, is that "values, ideologies, philosophies and appealing rhetoric" weigh more heavily than "reason and common sense."

Ideological and visionary school literature has flourished in the absence of crisp evidence. But that era is drawing to an end; education looks more and more like a real social science; specific instructional practices have been isolated and studied as never before. And the outcome is pretty clear: One study after another has shown that traditional instructional methods, which Chall calls "teacher-centered," produce better academic results than progressive, "student-centered," ones, and not only in reading.

A recent study of 24 models of schoolwide reform found that only three could furnish "strong evidence of positive effects on student achievement." All three were teacher-centered. Two of them, called Success For All and Direct Instruction, focused on imparting basic skills to children in the early grades; teachers read from a script, and students were often called upon to respond in chorus. The third, High Schools That Work, offered a rigorous academic curriculum combined with a strong vocational program. Core Knowledge offered "promising evidence," and a recent study found that children in Oklahoma City schools who had used the Core Knowledge curriculum for only one year significantly outperformed comparable children in reading, vocabulary and social studies. The more progressive models, in which learning is seen as a natural outcome of a child's curiosity and teaching as an act of guidance, registered "marginal evidence" or "evidence of mixed, weak or no effects on student achievement."

Some progressive educators have begun to acknowledge the virtues of a traditional curriculum and even the need for measurable results (just as some traditionalists have come to see the merits of such progressive innovations as small schools with a strong sense of community). Nevertheless, it would be naive to think that the new evidence will carry the day.

Traditionalism may have the results, but progressivism still occupies the philosophical high ground. Progressives see themselves as children's champions, their advocates in the face of adult society's preoccupations -- social conformity, conventional success and "standards." The core of the progressive faith, writes Alfie Kohn, the author of "The Schools Our Children Deserve," is: "Kids should be taken seriously. Because learning is regarded as an active process, learners are given an active role." In what Kohn calls the "Old School of education," on the other hand, "The idea is to have students memorize facts and definitions, to make sure that skills are 'drilled into' them."

It's no coincidence that this process sounds physically painful. Kohn writes as if traditionalists derived sadistic satisfaction from their mistreatment of the young. The two educational views have thus become proxies for political views -- progressivism for a liberal concern about social justice, and traditionalism for a defense of the existing order. And so it has required an act of courage, at least in the world of the bien-pensant, to stand up for standardized tests or a fact-based curriculum.

Jim Coady, the principal of the Morse School, found himself denounced as a racist and a reactionary when he adopted the Core Knowledge program. E.D. Hirsch, the literary scholar who is the theoretician and creator of Core Knowledge, writes that he is a "political liberal" who believes that "the only practical way to achieve liberalism's aim of greater social justice is to pursue conservative educational policies;" but Hirsch has been vilified in the graduate schools of education.

You have to wonder how long this can last. There are simply too many people, like Hirsch, who are politically liberal but educationally conservative for this formulation to continue to seem credible. And even political conservatives have stopped writing off the public schools in favor of vouchers or other privatization schemes, and started writing studies like "No Excuses: Lessons From 21 High-Performing Schools," a very useful guide from the impeccably right-wing Heritage Foundation. And the evidence is just too clear-cut. Educational progressivism, whose origins go back to Rousseau and Emerson and John Dewey, is profoundly appealing and very much in the grain of American liberalism; but its intellectual monopoly is fading.

The smug certainty that one is speaking for children, or for the poor, precludes debate and makes self-reflection unnecessary. This is precisely why so many years had to pass before liberals could accept the idea that welfare was having a harmful effect on many of its own beneficiaries. Welfare was a right; protecting that right against the encroachment of conservatives became a defining issue for liberals -- until it became impossible to deny that welfare dependency was an obstacle to self-sufficiency. Finally it became acceptable to favor welfare reform.

The same process occurred with bilingual education, which was a benefit given to largely impoverished Hispanic immigrants. Only after mountains of evidence accumulated that bilingual instruction did not help children make the transition to English --and after it became plain that the majority of beneficiaries did not want or believe in it -- did liberals even begin to examine the merits of the issue. In education, as elsewhere, liberalism must be rescued from itself.

James Traub is a New York writer and contributor to the New York Times Magazine.