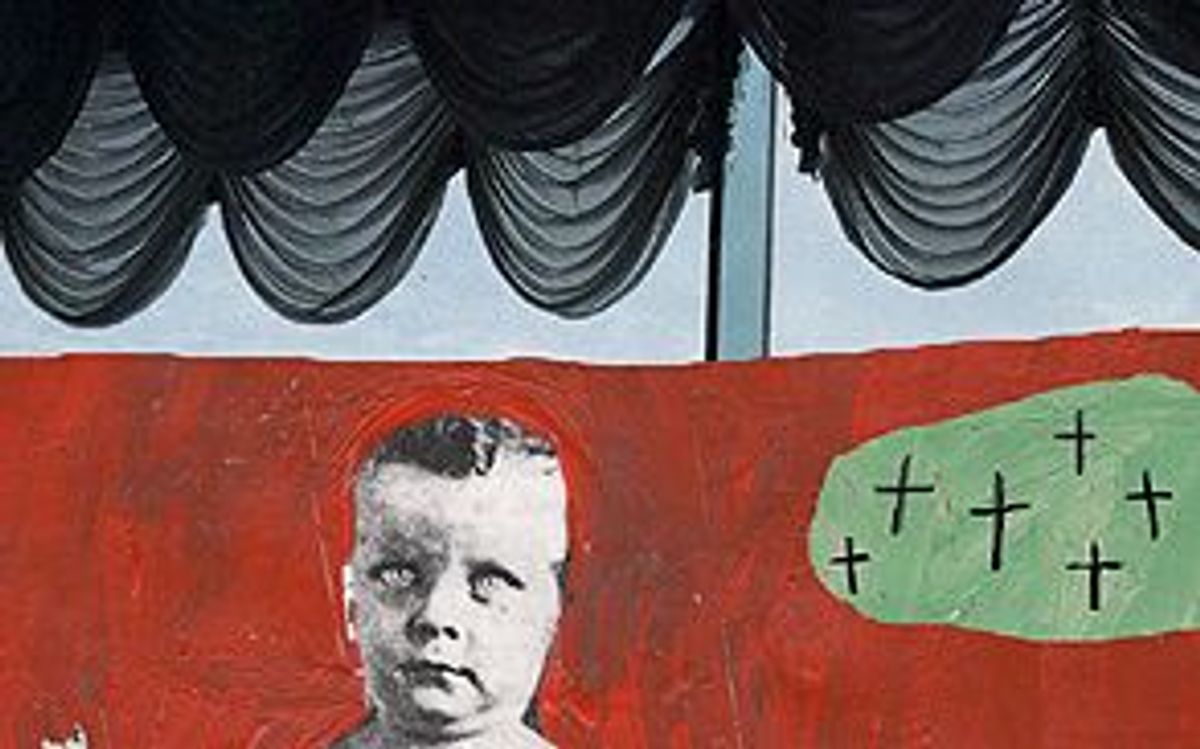 This is a great story. And like most great stories, you can sell it in a few words. In this case, three:

A Cemetery Theme Park called the Final Curtain. Because death is boring, and who needs a cortege when you can hire a parade?

But remember this: There is nothing more powerful than a great story. Not even the truth.

The Final Curtain story may already sound familiar. Maybe you read about it in the Los Angeles Times or the Boston Herald. Perhaps you heard about it on NPR, or a morning show on your local radio station. It's even possible that you saw something about it on a Fox television affiliate.

It doesn't really matter where you actually heard about the Final Curtain. Most of the stories -- dozens of separate pieces -- were pretty much the same. They were all wrong. Deathly wrong.

The Final Curtain, the news organizations reported, was the name of a chain of theme-park cemeteries being built by a New Jersey company called Investors Real Estate Development. The business model was a bit complicated (the Final Curtain was supposedly a private corporation, but some sites would be given away), but the central idea wasn't. The hook: to give artists a chance to design their own grave sites.

In proper forward-thinking art-speak, the Final Curtain Web page called these burials "site-specific works of passage." The company was seeking -- and had accepted -- proposals in anticipation of its first park in New York. Illustrator Nick Gaetano proposed a hot-blue neon sign reading "Nick is Dead." An artist and writer named Julia Solis wanted her body fat to be rendered to fuel an eternal flame. A woman named Kim Markegard had submitted plans for a jukebox and a 10-foot by 10-foot parquet floor so that her friends and family could dance on her grave.

There was more. The Final Curtain would make money by charging guests admission and cleaning up on concessions. There were timeshare plans and vacation packages, galleries and museums, Dante's Grill and the Heaven's Gate Cafe. If it sounds ridiculous, consider a few other cultural realities: "Who Wants to Marry a Multi-Millionaire?", cloned pets, impeachment.

Now, imagine that you're a journalist. You want to cover this story. You can't lose with a story about Cemetery Theme Parks. Your editor is impressed. The jokes write themselves. The headlines alone ...

It's almost too good to be true.

Unfortunately, that was the problem.

The Final Curtain turns out to be an elaborate media hoax cooked up by Joey Skaggs, a 45-year-old trickster in New York who's made a career of fooling the media and calling it art for nearly 35 years. Skaggs has appeared on CNN and "Good Morning America" as a drill sergeant with the Fat Squad, a fake disciplinarian diet program; WABC did an Emmy-nominated investigative segment on his Cat House for Dogs, a place to get your pooch laid.

Skaggs refuses to reveal how much of his own money he spent on his latest prank; he makes a living selling paintings and sculpture and occasionally teaching.

This is a great story.

"The hook, the line and the sinker." These are the three phases of any Skaggs prank. Setting up the Final Curtain took Skaggs more than two years. The reporters who fell for his story spent anywhere from two hours to two days writing their stories.

A prank as long and complicated as the Final Curtain required a lot of legwork. First, Skaggs needed a physical space for the Final Curtain to exist, so he installed a hard phone line at a friend's home in New Jersey. Then he printed stationery and business cards. He collected ideas and artwork from 15 collaborators. He invented personas. Most importantly, he registered www.finalcurtain.com and built a deep Web site.

Then he baited the first hook -- more than a year ago -- with a little ad on the back page of the Village Voice and 19 other alternative weeklies. The advertisement read:

DEATH GOT YOU DOWN?

At last an alternative!

Later, when reporters questioned him -- or, rather, his invented personas -- he would point to those advertisements as evidence that the Final Curtain had not gone up overnight. The fact that Final Curtain was already spending money gave the project an air of legitimacy. The next step was a simple press release. "Until now, the handling of death has been regimented and boring," it explained. "At the Final Curtain we are throwing away all the rules."

On Oct. 11 the L.A. Times published a column called "Off-Kilter" by Roy Rivenburg. The headline was "Go out with a bang: Cutting-edge tombstones in a theme-park setting." Rivenburg wrote the story straight. He spent about 200 words introducing the idea and cut straight to the grave markers: "A giant Etch-a-Sketch filled with cremated remains mingled with iron particles"; "A massive ant farm tombstone made from a combination of soil and cremated remains"; "a coffin containing a video camera -- so visitors could watch the corpse decay live or via time-lapse recording."

Amazingly enough, two days later Skaggs received a letter from an attorney representing Uncle Milton Industries Inc., the maker of Uncle Milton's Ant Farms. The letter was also sent to Rivenburg at the Times. Turns out that "Ant Farm" is a registered trademark. "We believe that you and Final Curtain meant an 'ant vivarium' or an 'ant habitat' to describe the concept. 'Ant Farm' is not a descriptive phrase but is an incontestable trademark that identifies Uncle Milton Industries."

Skaggs had a new line. He fired off another press dispatch about Final Curtain and the Uncle Milton letter. Now he had something far better than a silly idea: a controversy. The only thing the press likes more than a gimmick is a controversy.

"Sometimes you have to nurse things along," said Skaggs last week from his studio. "Controversy is a smokescreen. This is what politicians do to us all the time. They take you away from important issues by creating stupid issues. Then the media focuses on the stupid issues and you never question the premise."

From that point, the Final Curtain took on a life of its own. All Skaggs had to do was sit back and watch the press clippings pile up. On Oct. 22, Rivenburg at the L.A. Times kicked off the coverage with yet another column that made fun of Uncle Milton for going after Final Curtain. By this point, the site was drawing tens of thousands of hits per day, according to Skaggs.

By mid May, 39 newspapers in Europe and the States, some of which ran AP stories that originated with a story in the Charleston (S.C.) Post and Courier, at least 19 radio stations, 10 magazines, 20 Web sites and six television stations that had all fallen for his hoax. "It was a snowflake into a snowball into an avalanche," Skaggs says.

Two European TV crews inquired about shooting documentaries. A student at the University of Chicago asked to use Final Curtain as the basis of her graduate thesis. And then there were the online businesses and Web rings, which were only slightly more plausible than the Final Curtain. One site, selling itself as "the No. 1-visited cremation site online" offered advertising banner space. A letter from the founder of NetKin, which sells "virtual memorials," invited Final Curtain to become an "associate" site and place "Netkin Memorials" on its site. Final Curtain would take in a chunk of blood money from anyone who bought a memorial. Progressive-minded infidels from Funeral Industry made a few calls, too.

Then a pair of state agencies became intrigued.

In December, New Jersey and Colorado sent letters to the Final Curtain demanding that the site produce financial information or quit soliciting online. A Colorado officer refused to comment on the case, which is apparently ongoing. New Jersey did not return phone calls. Skaggs dismissed both with a polite letter pointing out that he wasn't soliciting any money.

A few months later, he sent out another press release, explaining that the whole thing was a hoax.

As a breed, journalists don't particularly like making mistakes. They like being bamboozled even less. Upon being informed of Skaggs' hoax, some grudgingly admit they were taken.

"I am aware of him and of the tradition of this sort of stunt," says Boston Herald writer Joel Brown, who wrote about Final Curtain in his column "The Web Browser" in October. "Usually they don't seem to be as dedicated. My bullshit detector didn't go off on this one."

Though Brown detected something rotten -- he inserted the following caveat into his story: "In the back of your mind, you have to wonder if the whole thing is just some sort of art-weasel prank, but the New Jersey outfit seems for real." Still, he never made contact with Final Curtain. Nor did he check anything about the organization other than its Web site. He copped to his mistake in his last column.

"We're embarrassed and disappointed," says Mother Jones staffer Alastair Paulin, who wrote a short item about Final Curtain. "This was a really sophisticated prank with a lot of people involved. The fact checker here actually spoke to the same artist [I interviewed]. It makes it tough, even if it smells funny."

So what's the point? Well, Skaggs calls it art. He claims to have a social message. From his press release: "To Joey Skaggs, the death-care industry is a giant corporate scam, exquisitely successful at commercializing death ... Ultimately, it's a waste of space and resources, and a burden to the natural environment at the financial and emotional expense of their clients."

Skaggs' pranks are a bit more graceful than his explanations.

To complete this story, let's incorporate some of Skaggs' words, a few quotes from the journalists who took the bait and a few other proverbs for a more suitable ending.

1. There's a sucker born every minute.

4. Don't believe everything you read.

5. "It's hard for satire to stay ahead of what's already a bizarre culture. But that makes satire all the more important." -- Skaggs.

6. There is a difference between a prank and a scam. A scammer only wants to rip people off. A prankster wants to make them laugh.

8. "Media hoaxing has a bright, promising future. All we can hope is that the hoaxers are smarter than the media." -- Jeff Howe.

9. "No matter how lightweight the story, or how archly it was written, we were presenting it as real." -- Alastair Paulin.