The MP3 of movies?

A new video compression technology promises to make online film swapping as easy as pie, but Hollywood's got nothing to worry about yet. 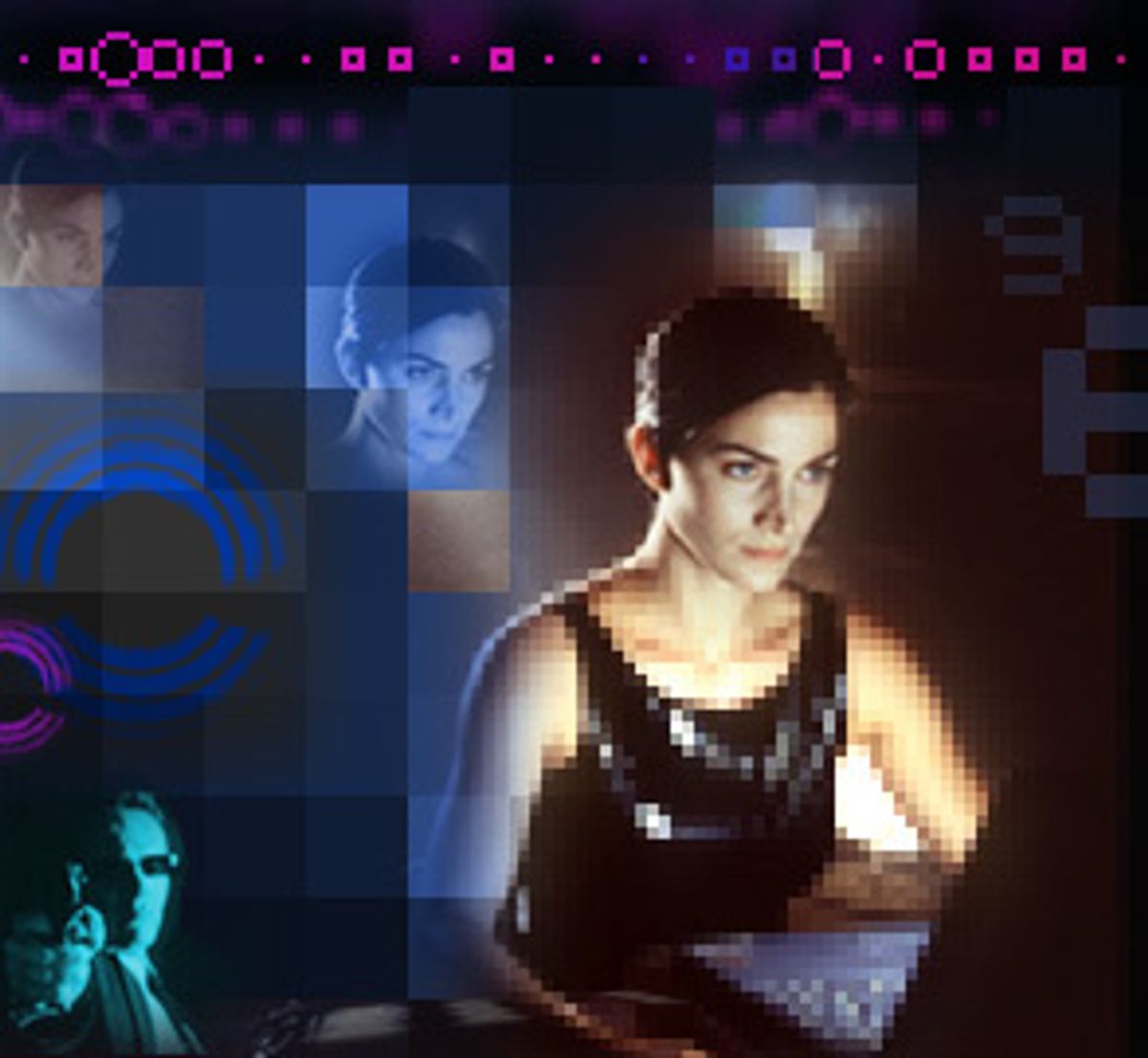 I expected DivX to blow me away, but after an arduous download of an "Apollo 13" trailer meant to showcase the new video compression technology, the blurry image on my computer monitor only convinced me that the Tom Hanks character wasn't the only one with a problem. DivX -- a new technology that oddly bears the same name as a reviled and failed pay-per-view DVD scheme launched by Circuit City a couple of years back -- needs some help too.

Of course, you wouldn't know it from talking to DivX boosters. Like start-up CEOs in training, they'll tell you that the software promises to shake the Hollywood distribution system, making digital copies of films as accessible to anyone with a Net connection as music has become. "It has the potential to explode like MP3s," says Dave, aka "Krazy8," the founder of Isonews, a fan site that has become an unofficial hub of DivX news.

"It's the Holy Grail of video technology," says another fan, who didn't want to be identified.

Can DivX mimic MP3 and spark the kind of passion that induces fans to fight for the right to download entertainment?

Well, not this week. DivX, which is software that essentially fuses an MP3 audio stream with digital video, still faces some serious technological limitations. Video files are huge and unwieldy; getting a copy of "High Fidelity" onto your desktop and swapping a copy of it for "The Virgin Suicides" is nothing like quick and easy; such a feat would probably rule your life for days.

As it stands now, DivX, which appeared as early as eight months ago and really started to take off in March, remains a technology with a lot of theoretical potential and some very practical failures. Great it may become; MP3 it is not.

I found the program easily enough; a quick search on Google led me to the official DivX Web site. Perhaps having learned a thing or two from the legal brouhaha afflicting Napster, Gnutella, DeCSS and pretty much every technological breakthrough that makes it easier to share copyrighted music or video without permission from the copyright holder, DivX doesn't identify its authors beyond the handles "Gej" and "MaxMorice," found in its information file. The program is also pretty secretive about system requirements needed to run DivX.

The download went off with nary an error message, so I figured I was ready to start viewing the site's sample trailers. Yet when I tried to play the opening scene from "Apollo 13," nothing happened.

I e-mailed "Krazy8, whom I tracked down through IsoNews. He wouldn't tell me his full name, only that his first name was Dave, that he was a 20-year-old college student in Virginia, that he uploaded his DVDs to his hard drive "as a hobby" -- and that he would put me in touch with someone who would help me get DivX to work.

This underground help desk seemed to work and an hour later, I got a call from Chris, a student at University of Washington who also wouldn't give his full name. He told me to switch computers from a machine running Windows 95 to one with Microsoft 98 or 2000, and to download the 7 beta version of Microsoft's Windows Media Player. "The codec is essentially a hack of Microsoft's codecs," he said. (A codec is a program that encodes and decodes, or compresses and decompresses, data that would otherwise use up inordinate amounts of disk space.) "DivX is only playable on a Windows machine for this reason."

Switching computers didn't solve the problem, though. Chris then told me I needed a RAR program, which cuts the movie into 15 megabyte parts for DivX to read. I got one, downloaded it, and finally, DivX worked. I watched a two-minute clip of "A Bug's Life," and the trailer for "Apollo 13" that had previously failed. Both are housed on the DivX Web site, and neither took more than five minutes to load -- about half as long as a trailer streamed with a Real Player, or the authorized version of Windows' Media Player, and just about the same amount of time to open a pair of e-mailed photos.

The quality wasn't bad. When shrapnel burst from Apollo's hull, the stereo-quality sound deafened me with pleasure. The visuals looked terrific too, but only from afar. During close-ups and jerky actions, say when Tom Hanks spins to look at the oxygen leaking into space or when the camera pans quickly through the cockpit, the picture broke into tiny squares -- a digital blur. Even a clip of the computer-animated "A Bug's Life" pixelated quickly.

The bit rate or amount of data streamed in a second, was set by the encoder below 1100, which Chris said generally ensured the highest resolution. But even if the quality was ideal, I doubt I'd have time to watch a whole movie. Listening to MP3s at work can be justified; watching a movie would hardly go over well with the powers that be.

Still, I went searching for "The Matrix," which I'd been wanting to see since I heard that Al Gore liked its veiled references to "Alice in Wonderland." But the trailer on the DivX site didn't work, and I never found a full-length copy. In fact, I couldn't get a single film.

It wasn't for a lack of effort. I spent the better half of three days cruising IRC chat rooms like #divx, #realdivx and #shadowrealm. These virtual spaces often felt like the floor of the New York Stock Exchange: At #divx, more than 100 users were gathered, hawking DivX versions of "Eyes Wide Shut," "Star Wars," "Gladiator" and more. Messages scrolled like tickertape. It looked like there was a lot of trading going on, though no buying and selling; in this black market the goods are free.

Every few hours, "The Matrix," which has an intense online following, appeared in one of these messages. I'd been wanting to see it, so whenever I saw the title, I pounced: "Do you have an FTP server with it?" "Do you know where I can get 'The Matrix'?"

Half the folks who responded to my queries, people like "SoDMovieMan," said no. So I started checking the FTP servers that popped into the discussion every few minutes, apparently as pirate promotion. After a while, I gave up on "The Matrix." I just wanted, longed in fact, to spend half a day -- which is what the DivX savvy told me to expect from my T1 line -- waiting for a movie to amble onto my computer. It apparently takes anywhere from two to 10 hours to download a DivX version of a film, but I was ready. It could have been "The Karate Kid 3" for all I cared.

According to Chris and other traders who were even less forthcoming, these difficulties are pretty common. "You have to wait in line," Chris says. "When people are attached to servers for five or six hours, it's tough to get in. It's not like MP3s." A whole CD is about one-sixth the size of a DivX movie, he added.

Getting into a server doesn't guarantee that you'll get a high-quality rip either, says Dave, aka "Krazy8." The coding process has its pitfalls. To move DVD content to a computer, you first need to find DeCSS -- a program that decrypts DVDs, allowing them to be played in computers running Linux. The only trouble is that DeCSS has essentially been outlawed. Eight movie studios are suing four Web sites for distributing the program, which they argue is a tool for theft, and so far a federal judge has tended to agree, enjoining the sites from distributing the program. Of course, it's still easy to find -- links to mirror sites, for example, can be found at 2600, one of the four defendants.

So, once you have DeCSS, it takes an hour to decrypt and upload a movie in DVD format to your hard drive. Encoding the digitized film to DivX takes longer: The video portion takes anywhere from three to six hours; the audio tacks on another hour. Then you have to compress the two into an .avi file, which is where things can get messy. Unless the sound and video are perfectly lined up, one or the other will lag -- sort of like the dubbing in kung fu movies.

Also, if the connection breaks at any point during the upload, DivX won't let the video be viewed. To fix it, the encoder has to go back to the cutoff point and re-encode the 15 megabyte RAR segment. This usually takes less than an hour, but a lot of people don't know to check for this, hence poor-quality movies proliferate.

"There are good DivX movies and bad ones," says Eric Smith, founder of Macintosh DivX Resource, which is offering $5,000 and an iMac to anyone who can write an open-source Apple version of DivX. (A Macintosh DivX program has already been written, but the author is not making the source code available.) "The good ones have no problems, and the bad ones have a ton of problems." Of course, there's no way to tell the difference until after you download it -- and even at its best, a DivX flick is unlikely to match the quality of a video you can rent.

These days, Dave and Chris say they no longer download other people's movies. They encode the DVDs they own "just in case the DVDs get scratched," Chris says, but after watching a few pirated movies after first discovering DivX, they gave it up.

"It only takes 10 minutes to walk down to a rental place," Chris says. "But downloading takes so much more preparation." Plus, he says, "you can't watch the movie on your television. In the end, it's not really worth it."

The contrast between the DivX scene and the early days of MP3s could hardly be more drastic. Back in the halcyon days of 1998, long before Napster made MP3s both a household world and a raging battlefield, it was essentially child's play to find the newest Madonna cut, or more obscure live Rage Against The Machine track. You did have to jump through some hoops -- like getting a password to an FTP site from a chat room, and then uploading your own MP3 (which required spending some time learning how to "rip" CDS) before being allowed to download a new one. But it was eminently doable.

Of course, there's one obvious reason why MP3s were and are easier -- they're so much smaller. But the other difference is the level of scrutiny that the mainstream entertainment biz is focusing on the Net. It's hard to find "The Matrix" because Hollywood is no doubt watching closely for any "Matrix" traders. The Net is no longer terra incognita for the likes of Sony or Universal -- it's a clear and present threat, and there's no going back.