The battle with Hillary is joined 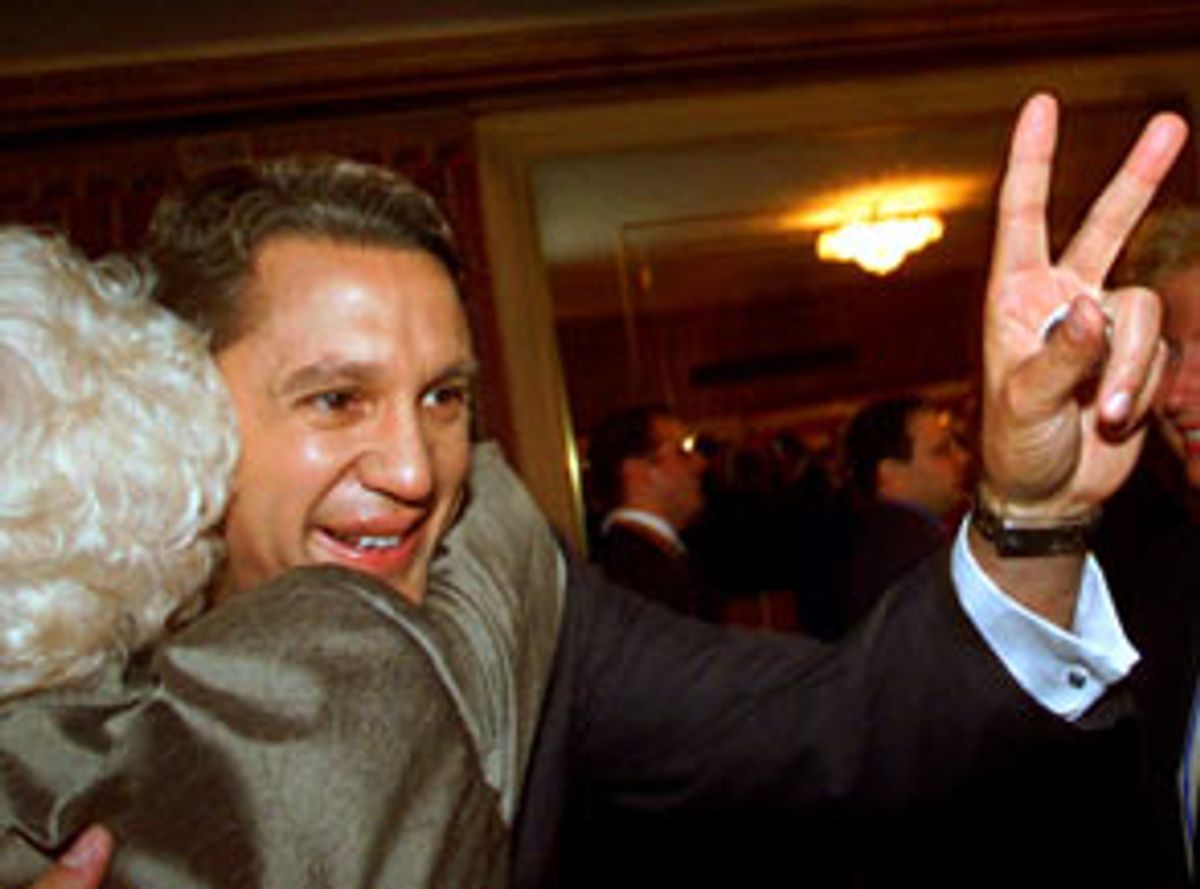 It's official. The understudy is now the lead -- for good.

Eleven days after Rudy Giuliani dropped out of the most overheated local political race in the country, and 10 days after Rep. Rick Lazio, R-N.Y., announced he would take his place, the New York State Republican Party officially nominated Lazio as its candidate for U.S. Senate Tuesday afternoon.

The 42-year-old, four-term congressman took the stage at the Hyatt Regency Buffalo accompanied by the theme from "Rocky" and holding his wife's hand, waving and giving a thumbs-up to the crowd. (The "Rocky" theme may have had a double meaning: Lazio was sporting a severely swollen and stitched-up lip Tuesday, the result of a slip and fall during a Memorial Day march.)

Standing before a huge, Patton-like American flag, Lazio didn't quite match the level of vitriol that the day's other Republican elected officials directed at his opponent, Hillary Rodham Clinton. But, using the carpetbagger issue which has been the early focus of his campaign, he quickly staked out his turf as the true New Yorker in the race and painted himself as the underdog.

"I begin this campaign with no illusions," he said, in a delivery that rarely deviated from his prepared script, which even included directions for him to smile at a certain point. "I am the underdog in this race. My opponent is better financed and better known. She comes to New York with the support of every left-wing special interest, from Washington insiders to the Hollywood elite. But as I've said before, 'Bring 'em on.'"

In his roughly half-hour speech to more than 400 GOP delegates, Lazio never mentioned Clinton by name, but devoted much of his speech drawing a distinction between him and his unnamed opponent. "I have on advantage she will never have: I can be myself," he said. "I am a New Yorker. You see, for me, New York is not just a mailing address, it's my home."

Immediately after his speech, Lazio sped over to Dunn Tire Park, the home of the Triple-A Buffalo Bisons, where -- backed by fireworks and exploding confetti -- the campaign unveiled the John McCain-style bus Lazio will use to tour the state during the next three days: The Mainstream Express!

No joke. That's really what it's called.

Much of Tuesday's nominating convention, which was emceed by state Republican Party chairman William Powers, consisted of the state's top Republicans stepping to the podium and taking turns soundly whopping Clinton upside the head.

Erie County Comptroller Nancy Naples: "Maybe they anoint their senators in Arkansas, but in New York, Mrs. Clinton, we elect our senators."

Joseph Bruno, the always intriguing state Senate majority leader, offered some humor not directed at Clinton: "My wife saw Rick on TV," he explained. "She hadn't met him. She said, 'What a great looking guy. What a great guy.' And you know, when you talk to people, they're right, he projects out, he acts and looks like a winner. But you know, he was so handsome he had to take a tumble. He has now a big lip. ... But he'll get over that."

The Republican state convention consisted of roughly 1,000 people filling a modestly sized hotel ballroom. It was a far cry from the state Democratic convention in Albany two weeks ago, where roughly 11,000 filled the enormous Pepsi Arena to nominate Clinton, and where the event nearly acquired the feel of a national political convention.

Giuliani did not attend Tuesday's Republican convention, but Lazio, who had publicly toyed with entering the Senate race several times over the last year before Giuliani announced he had cancer last month, opened his acceptance speech by paying tribute to the New York mayor. "Our thoughts and prayers are with you," he said.

Accepting the nomination capped a busy Tuesday of campaigning for Lazio, which began with an early morning appearance before a throng of reporters in front of the Kastas Restaurant on Hertel Avenue in Buffalo. Again, Lazio flaunted his New York credentials.

"This is all going to be about New Yorkers electing a New Yorker, a New Yorker who's been with them for eight years, not someone who's just shown up when they want something," he told the assembled scribes and television cameras crowded around him on the sidewalk.

In response to a television reporter's question about whether he was "going negative," he replied: "I don't think I'm being negative at all. Do you think that raising residency and commitment to New York for eight years is going negative? Then I guess we're on a different wavelength ... (New Yorkers) shouldn't be looking for a candidate who's not been with them just over the last five or six months, but been with them for the last eight years, delivering."

From the diner he proceeded to the Statler Towers in downtown, for a $25-per-head "Women for Lazio" luncheon in the hotel's chandeliered grand ballroom (circa 1921). There, he worked the roomful of Republican activists, operatives and local businesspeople.

He hugged. He shook hands. He stared out at people in the crowd and gave the two-part wave/thumbs-up, sputtering out standard grip-and-grin salutations: "How are you?" "Good to see you!" "Oh, thank you!"

He was introduced by Lt. Gov. Mary O. Donohue, who couldn't resist taking her own jab at the first lady. "Hillary is scared," she declared. "She's so scared, she's forgotten her last name."

But Lazio warned his supporters about cheap shots expected from the other side. "We're going to have a lot of mud thrown at us," Lazio told the crowd. "You should be ready for that. That's the modus operandi on the other side, and they're going to find something out about this New Yorker and about our New York state: We don't back down from a fight!"

In what has become a staple of the modern political contest, the Clinton campaign wasted little time firing off the obligatory e-mail response to Lazio's address almost immediately after he finished his roughly 30-minute acceptance speech.

"Today Rick Lazio offered the people of New York recycled insults and rhetoric that doesn't match his record," wrote Howard Wolfson, a spokesman for Clinton's campaign. "Time and time again Rick Lazio has voted against New York's working families in Washington. Hillary Clinton has been running an inclusive campaign since day one and fighting for children and families for thirty years. New Yorkers will always be able to count on Hillary to stand up for them in the Senate."