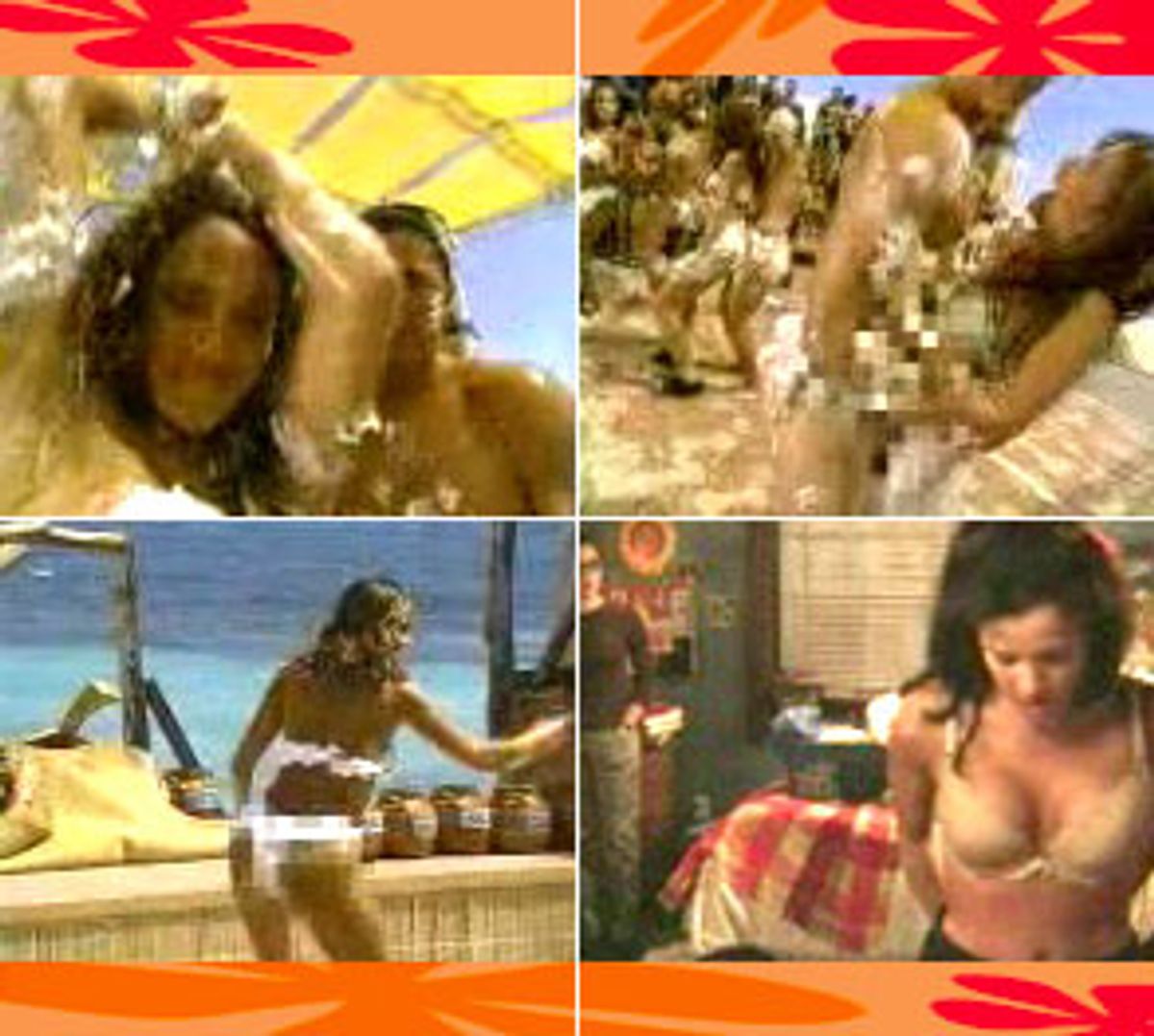 "Renzo is ready for his sit-in/orgy. When Casey and he arrive in the bathroom, Carla and Paige are waiting. A broken shower is making the bathroom hot and steamy. Time to strip!"

And if that's too late for you, there are the virtually round-the-clock airings of "Spring Break 2000" -- in which preppy college types lap-dance, jiggle and lick their way to glory in a contest to be crowned the King and Queen of Spring Break.

Of course, MTV has always been a place where musicians felt comfortable flaunting their fantasies (and reflecting those of their viewers). Classic flesh-baring videos -- from Duran Duran's "Girls on Film" and Madonna's "Justify My Love" to this year's fetish workout, Sisqo's "Thong Song" -- have always brought the network notoriety and viewers. (Hard to believe that the now-tame "Justify My Love" clip was relegated to late-night airings when it came out in 1991.) And specials like "Sex in the '90s" and the popular talk show "Loveline" have looked at lovemaking under the banner of news and education. (Getting the facts on curved penises -- a favorite "Loveline" topic -- is educational, right?)

However, some of the network's latest programming is taking MTV's sexy rep to a whole new lascivious level. The network's newest original movie was "Jailbait," about an 18-year-old high school senior named Adam who gets into legal hot water after consensual sex with Gynger, an underage sophomore. Then there's "Undressed," which follows the (mostly sex) lives of an extended and revolving group of students at an unnamed college. "Undressed" is described this way on MTV's Web site: "A juicy, steamy, behind-closed-doors peek at the modern relationship. Mmm, voyeurism is good."

"MTV is definitely more sexed-up than it was five years ago or even a year ago," says Robert Thompson, director of the Center for the Study of Popular Television at Syracuse University. "But this is a network that has to reinvent itself. It's defined by being cutting edge and hip. And as other cable networks have caught up [sexually], there's this sense that there has to be an escalation to keep these audiences there."

An MTV publicist maintained that MTV has changed little with regard to sex over the years, noting that the network has covered Spring Break for a decade and that its sexually oriented specials and documentaries are nothing new.

That's nonsense -- MTV's "Spring Break" coverage seems to push the sexual envelope further every year. Indeed, the coverage began to resemble an episode of "The Jerry Springer Show" so closely that the network actually brought in Springer to host his own edition -- dubbed "Springer Break," of course -- of the lascivious activities. Typical "stimulating" game: Buxom babes and strapping fellows swap clothes in a phone booth, against the clock. Naughty post-swap laughs are had from watching the guys attempt to keep their privates covered with nary more than a thong.

A teenager living on a steady diet of "Spring Break" shows might well wonder if something is wrong with her if she doesn't know how to shake her butt cheeks until they vibrate like a washing machine on the spin cycle -- preferably while wearing crack-covering dental floss.

"It's almost like an orgiastic version of the 'Today' show," says Thompson. "Instead of gathering around to say 'Happy Birthday, Mom,' kids pull down their pants or pull up their shirts to show their breasts." Actually, during the two most recent spring breaks, simply exposing body parts (which MTV digitally covers in any case) became positively commonplace -- three-way tongue-kissing and applying whipped-cream bikinis were the new preferred activities.

(Ironically, this boobs-and-booty blowout is in direct contrast to another, also extremely popular, ingredient in the MTV mix: the squeaky-clean "Total Request Live," whose stars of choice are straight-laced boy bands like 'N Sync and the Backstreet Boys and pouty-lipped teenage virgins like Britney Spears, Mandy Moore and Jessica Simpson. Where programs like "Undressed," "The Real World" and "Spring Break 2000" show the antics of college-aged young adults, the screaming throngs of braces-wearing kids outside "TRL" Times Square studios shows that younger kids -- high school-aged, preteen and even elementary-school children -- are an important part of MTV's core audience.)

Sexuality has become a core theme for MTV over its nearly two-decade existence, appealing to its youthful, hormone-filled demographic. The network has changed its focus since its inception in the early '80s, shifting from a diet of videos 24/7 to the powerful position of what could be almost be called a "rite-of-passage channel" -- where preteens and teens come to find out about life (read: sex). And such information can come in pretty handy in today's post-AIDS, sexually reliberated society, where watching everything from "Friends" to "Nightline" requires an understanding of high-level sexual lingo.

Why is MTV so intent on tantalizing its viewers with its own sexy variation of the carrot and the stick? Ratings, of course. The network reaches more viewers ages 12 to 24 than any other cable network and doesn't want to lose this extremely advertiser-friendly audience. And MTV executives know whereof they speak: After a ratings drop in the mid-to-late '90s, 1999 was the highest rated year in the channel's history -- and not just because of Carson Daly. The shows featured in MTV's late-night "10-Spot" -- including "Undressed," "True Life" and "Loveline" -- have increased the network's 12- to 34-year-old viewership by 57 percent since its 1996 launch. The ratings for "The Real World: Hawaii" -- undoubtedly the series' sexiest -- set network records. And in the first quarter of 2000, MTV's overall prime-time ratings among 12- to 34-year-old viewers were up 14 percent from the previous year.

But are teens learning about sex from MTV, or just experiencing the excitement equivalent of stumbling across a late-night adult flick while giggling with friends at a slumber party? "I think some of MTV's programming is like catnip for little kids," says Thompson. "The network knows that viewers are poised at the remote control and they have to do something extraordinary to get them to stop." Face it: Who can click away from the sight of cast members of "The Real World" walking around their Hawaii house completely naked except for digitally distorted private parts? And who wouldn't drop their jaw in amazement as they watch a female spring breaker pour a shot of liquor on a strange guy's stomach and lick it off -- and then wander back to the hotel for a sexy, sudsy shower with one of her female roomies?

But while these sex-soaked themes may offer laugh-out-loud good times for the network's "older" -- that is, college-aged -- viewers, how does it affect the younger age group that makes up a significant portion of the MTV audience? "The risk is setting up unrealistic expectations about sex -- kids can lose their perspective and may not be emotionally ready to deal with [such content]," says Robin Goodman, a psychologist with New York University's Child Study Center. "You want to avoid having kids do things just because they think everyone else is doing it. Just because it's there on MTV a million hours a day doesn't mean everyone's behaving that way -- having a lot of sex partners, for example, or engaging in risky sexual behaviors."

Thompson points out that at least MTV's latest fare is open and honest about its sexual nature. "With 'I Lived in a Brothel,' you know exactly what you're getting. Actually, I find the more subtle stuff -- like the 'virgin chic' of Britney Spears -- creepier." But as the expansion of basic cable allows kids to watch everything from strippers on "Howard Stern" and Brazilian thong-wearing models on E!'s "Wild On ... " to thinly veiled sex jokes on Comedy Central, how can MTV keep up and stay on the cutting edge of copulation?

Sharon Goldman Edry is a Manhattan writer who contributes to TV Guide.