The best of a slew of recent biographies points to the author's conscious self-closeting. 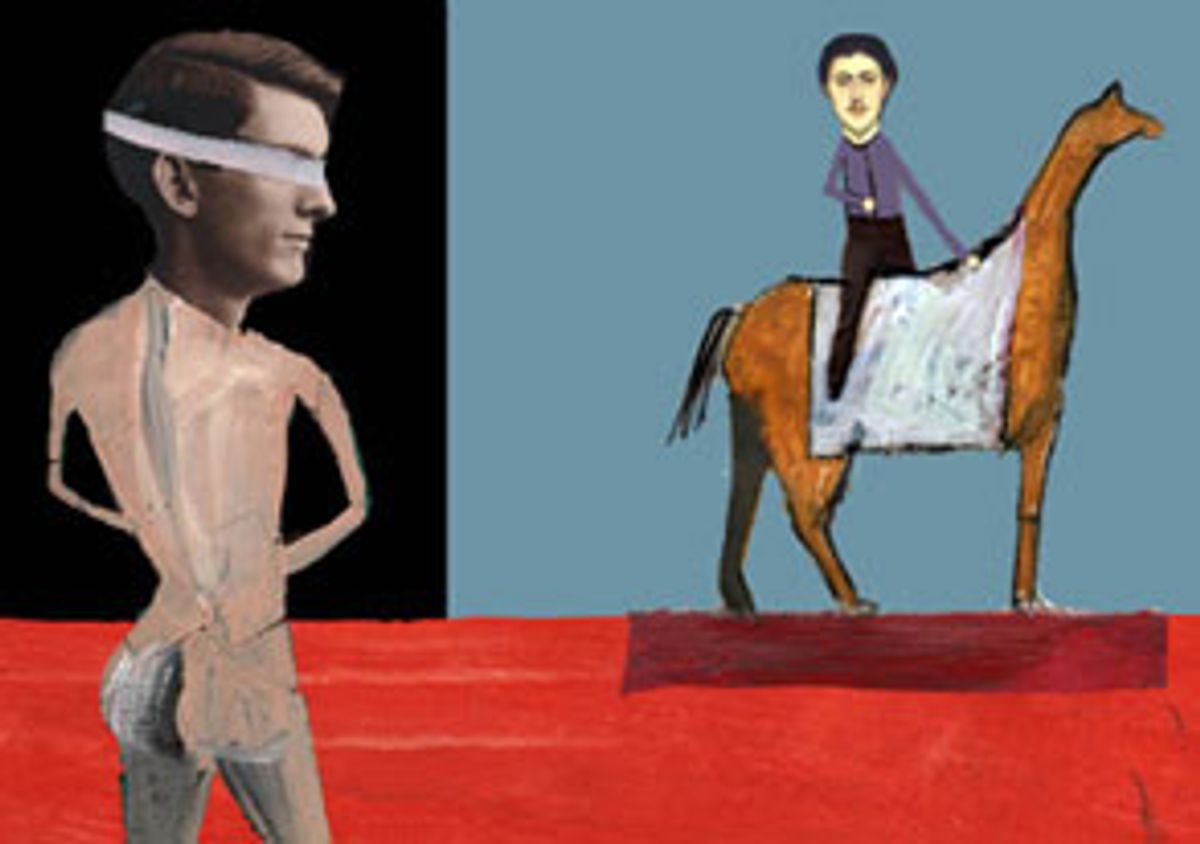 A French baron (who preferred the more serious -- though honorary -- title of professeur) once told me that he "went to bed" with Truman Capote not because he was attracted to him, but just to see what it would be like to have sex with the author of "Breakfast at Tiffanys." I suppose, then, he would also have slept with Proust if hed had the chance; but Im not sure that Proust would have slept with him. The baron was too openly gay and, in any case, not Prousts type. For Proust, apparently, the erotic and the clandestine were identical, and the ideal lover was a "straight" man.

Among the many recent books about him (from the austere "Proust and Signs" by the late French theorist/demigod Gilles Deleuze, to the bizarre "Prousts Lesbianism" by Elisabeth Ladenson, to the popular "How Proust Can Change Your Life" by Alain de Botton, and the respectable "Prousts Way: A Field Guide to 'In Search of Lost Time'" by Roger Shattuck), William C. Carters magnificent new biography, "Marcel Proust: A Life," makes it pretty clear that Proust was very consciously in the closet, and that he liked it there, the door always just slightly ajar so that he could see out but no one could quite see in.

Proust apparently had two types: one early on, the other later in life. When he was young, says Edmund White in his short biography for the Penguin Lives series, "Proust liked artistic young men with mustaches and dark eyes: that is, those who resembled himself." Eventually he fell prey to a passion for more-or-less heterosexual, lower-class studs who generally took their time taking his money and breaking his heart.

Just how much sex Proust actually had remains, as it should, a secret, even to Edmund White. Its not easy to imagine the frail, thin, asthmatic Proust engaging in anything too athletic or aerobic but it does seem clear, particularly from Carters biography, that he had a healthy enough interest in and appetite for that aspect of human relations that sometimes complements and sometimes vividly contrasts with the more purely social.

Although he always publicly denied that he was homosexual (to the bitter chagrin of his friend Andre Gide) -- going so far as to fight a duel to defend his reputation against a journalist who dared to imply that he was having an affair with the beautiful Lucien Daudet -- there is, in addition to the many disguised, gender-bending and metaphorical references to the subject in his novel, plenty of open analysis of the spectacle of "inversion" as seen in Paris circa 1910.

The longest such passage in "@ la recherche du temps perdu," or "In Search of Lost Time," once known in English as "Remembrance of Things Past," is Part 1 of "Sodom et Gomorrhe," published in English (for whatever obscure or puritanical reason) as "Cities of the Plain." This 32-page tour de force describes a sexual encounter between Jupien, a swishy ex-tailor, and Monsieur de Charlus, a married aristocrat who takes great pride in his virility and manliness.

The scene is set in a courtyard at noon; the narrator, while watching for the return to the house of the Duke and Duchess de Guermantes, is observing a rare plant whose "neglected pistil" stands erect and curved in readiness for the attentions of a bee. He (the narrator) then happens to witness M. de Charlus -- "corpulent, greying, aged" -- slowly crossing the courtyard wearing the strangely soft, smiling expression of "a woman." Jupien, the ex-tailor, has caught sight of him for the first time, and "contemplated with a look of wonderment the plump form of the ageing Baron." He then, "in perfect symmetry" with Charlus "smug, nonchalant, fatuous air," puts on a comely show of attitude himself. He had "thrown back his head, given a becoming tilt to his body, placed his hand with grotesque effrontery on his hip, stuck out his behind, struck poses with the coquetry that the orchid might have adopted on the providential arrival of the bee." The two complicated men proceed to do something sexual in Jupiens room, making just enough noise for the narrator to connect it to the sound of a person "slitting anothers throat," and then "subsequently the murderer and his resuscitated victim were taking a bath to wash away the traces of the crime."

M. de Charlus is quoted a few pages later as saying to Jupien, concerning "young gentlemen": "I am never satisfied until I have touched them, I dont mean physically, but touched a responsive chord. As soon as, instead of leaving my letters unanswered, a young man starts writing to me incessantly, when he is morally, as it were, at my disposal, I am assuaged, or at least I would be were I not immediately seized with an obsession for another."

According to the narrator, who in certain respects at least is very much like the author himself, M. de Charlus and Jupien belong to a "race upon which a curse is laid and which must live in falsehood and perjury because it knows that its desire, that which constitutes lifes dearest pleasure, is held to be punishable, shameful, an inadmissible thing." Given what we know of his life, it does seem a safe assumption that for Proust the man (as well as the author), "lifes dearest pleasures" were seldom if ever characterized by ease, pride or virtue -- they were expensive, both materially and morally, and they never lasted for long.

If Prousts highest good is family, and the memories associated with it, which can comfort and sustain one throughout a whole lifetime, lifes dearest pleasures are of an altogether different cast, and the search for them, for homosexuals anyway, is endless and vexing. You may try to live differently, and "no doubt the life of certain inverts appears at times to change, their vice (as it is called) is no longer apparent in their habits; but nothing is ever lost." Our sources of happiness and unhappiness are, for Proust, as deeply rooted within us and as tenacious as our memories are; and as delicate, in their way, and certainly as complex.

If there is in every life one Great Love (which always ends in some degree of tragedy), for Proust it was his affair with Alfred Agostinelli. Apparently heterosexual (or, one would hope, bisexual), Agostinelli, who came from Monaco, was Prousts chauffeur for a while in 1907 and again in 1908. Years later, at the age of 25, he appeared again, and Prousts passion for him ripened -- he fell in love. Biographers and critics agree that Agostinelli was the model, transformed in many ways, for Albertine, the female (though somewhat androgynous) object of the narrators desire in Prousts novel.

Agostinelli and his rather ugly girlfriend moved in with Proust (who often went to extravagant bother to ensure absolute silence and solitude in his apartments and countless hotel rooms), and the wealthy novelist began to support them both as well as Agostinellis entire family. A year later, the young man and his girl disappeared without any explanation, just as Albertine does in the novel.

According to Carters biography, Agostinellis only real passion was for speed. He loved cars and airplanes. "In early spring [of the year 1914] Agostinelli, aged twenty-five, had enrolled in the aviation school run by the Garbero brothers at La Grimaudiere, near Antibes. He registered as Marcel Swann, in bizarre homage to his benefactor." Proust, in Paris, hired a detective to find his beloved daredevil, and then sent a secretary to offer Agostinellis father money if he could persuade his son to return to Paris. Proust had already offered to buy Agostinelli an airplane and a Rolls-Royce, but none of his bribes was sufficient to detract Agostinelli from his fate. During his second solo flight, with his girlfriend and brother watching, he flew his plane into the sea.

According to Carter, "Once Agostinelli recovered from the shock of finding himself plunged into the water, he noticed that the plane, though three-fourths submerged, seemed to be floating. He stood atop the pilots seat and screamed for help ... But suddenly the monoplane sank beneath the waves, taking Agostinelli with it." His body was recovered eight days later.

Keeping a handsome young man with a girlfriend and a penchant for reckless wandering both upon and above the earth isnt the kind of thing an upper-class gentleman in early 20th century Europe would have been quick to advertise about himself. Such an arrangement would have been more understood than explained or talked about, and the whole tradition of patronage by an older, wealthier man was in any case respectable so long as the nature of the relationship was kept discreet. What the two men did with each other in private was nobodys business but theirs, and it seems reasonable to imagine that the element of secrecy could very well have heightened the pleasure of Prousts erotic rendezvous -- it might have, ironically, preserved an aura of "sacredness" or sublimity about the situation, especially for someone as troubled and anxious about the publics opinion of him as Proust was. The secrecy might have removed, in his mind at least, any judgment from without -- a kind of Proustian plotline.

Nowadays its generally pointless to enshroud a relationship in secrecy, because nobody is scandalized, which is one way of thinking about the difference between Prousts ethos and ours. Proust had a good reason -- a sexy reason -- to be closeted; now, alas, no one does. For Proust, according to a letter quoted in Carters biography, homosexuality was the result of a "neurotic defect." Being gay was one of his many afflictions. But it was clearly also among the conditions of his life out of which he was able to fashion his undeniably great work -- and his lifes dearest pleasures.

Rick Whitaker is the author of "Assuming The Position: A Memoir of Hustling."