Forget supermodels, it is She of the coveted vote whom I most desire. 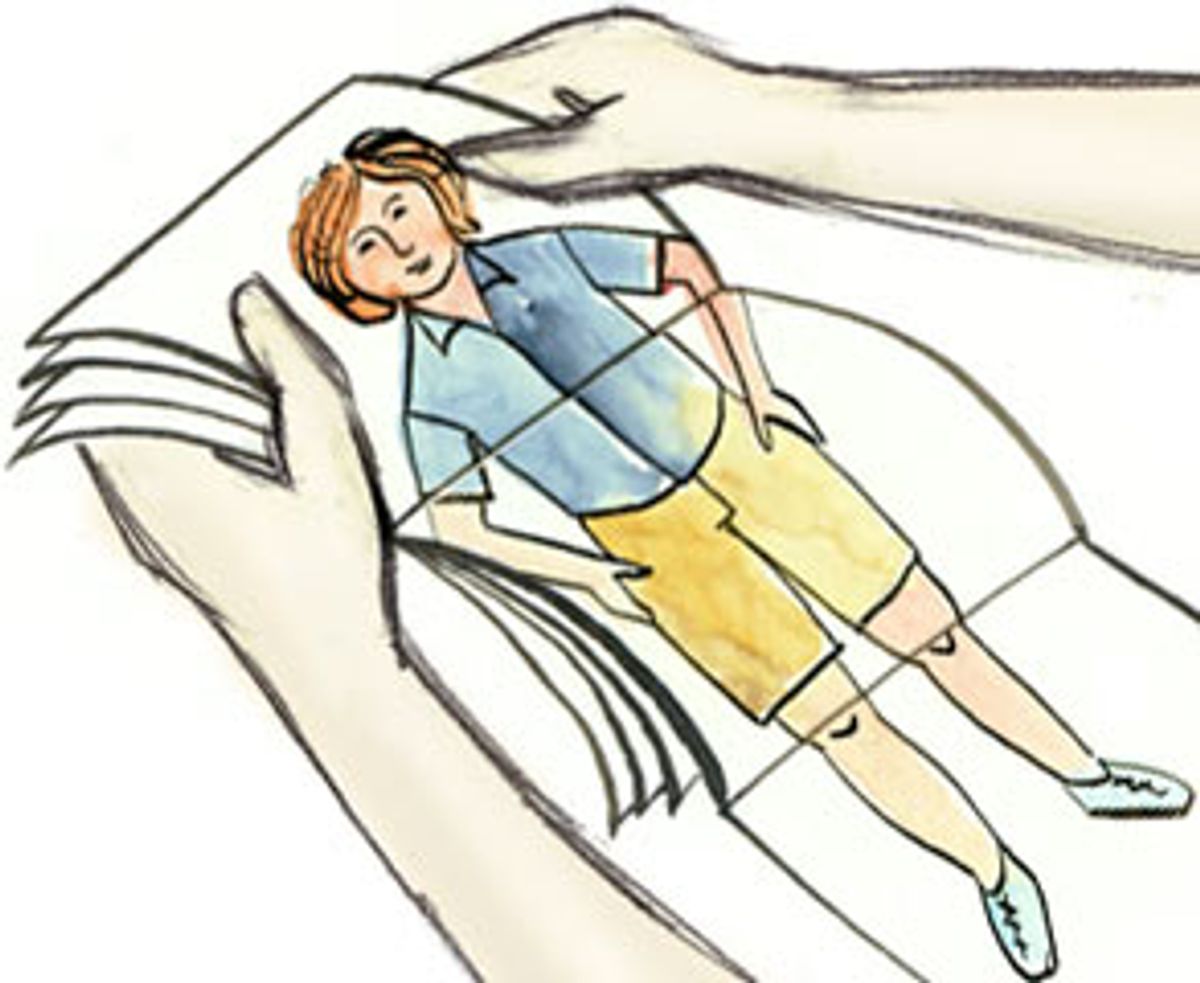 There was no pop-eyed lust, no furtive boner, no drooling over dusky bazooms and stiletto gams. I could not be moved by Teutonic nubility, taut bellies or thong-flossed buttocks. In fact, the entire 3-D section conjured up only the grim image of nearsighted shut-ins with red and blue cardboard glasses perched on their trembling noses, soiled BVDs clumped around their varicosed ankles.

To hell with coltish babefests and contrived 3-D hooey. It withers in the face of this robust confidence, these sturdy thighs, those downy arms. What is a collagen-plumped pout and a belly ring in the face of a tender grin and the endless promise of maturity? I am over the supermodel; we're not even friends. These days, most nights, I belong to the soccer mom.

That's right, she of the coveted vote and the Plymouth Voyager. Am I the only one to have discovered her sultry poignancy, the sexy affirmation that everything -- and I do mean everything -- is possible after childbirth at the age of 35? Nope. We are legion (though still somewhat stealthy and apologetic).

I know, I know. The Lands' End models are fairly young women, but that's only because catalog models usually are. What they project is unabashedly adult. These are still proto-soccer moms, here to dispel the ridicule and denigration heaped on their sisters by smarmy comedians and jealous Type A urbanettes. This subtle swan might require a kinder cut, but that's about all the supermodel has on this Venus in a tankini.

I am not the first guy to complain (others in a suspiciously defensive tone, I with great sincerity) that the overwhelming majority of women promoted by SI, Vogue, Harper's Bazaar, Cosmopolitan, Allure -- the whole panoply of publications dedicated to starvation chic -- tend to be about as sexy as plaster mannequins. Beautiful, yes -- if you subscribe to the criteria of Hugh Hefner and Hamish Bowles -- but also unapproachable, unreal and kind of cadaverous.

The typical supermodel is, to my eye, oddly lifeless, sterile. Does she have genitals? Or is her authentic sexuality subsumed by the awesome austerity of her calculated media presence? Could I really contrive a convincing fantasy in which I would throw down Heidi Klum and blitz her fleshy battlements? Nah. For that I need a real woman. For that I need a soccer mom.

A soccer mom implies an inner life; she bristles with knowledge and heat and can-do sexuality. Her alluring humanity and softness -- coupled with the expectation that she has a lot more on her plate every day than rolling out of bed and posing for dollars -- brings to mind novelist Nicholson Baker's observation, made in his highbrow trash novel "Vox," that an orgasm in the mind of an intelligent woman is far more exciting than one that occurs in an outwardly gorgeous void. Soccer moms are smart, not just brainy in that "librarian about to take her hair down way," but charged with a brand of common sense that conveys sufficiency of a superior, and way-sexy, grade.

In some quarters (pretty much everywhere but deepest, darkest suburbia), soccer moms have a bad rep, not to mention an aesthetically displeasing habitat (the mall), boring priorities (marriage and children) and bad footwear (white leather Keds). But how blind we are to interpret their sweet suburban industriousness as repressed and sexless. What could be more seductive to the active sexual imagination than pluck and verve and white cotton underpants?

I wasn't nuts for the postmodern meanderings of Dave Eggers' phenom-book "A Heartbreaking Work of Staggering Genius," but at least one aspect of the work resonated for me: Eggers' desire to get over on one of his fellow parents. "I was looking to score," he writes of attending Back to School Night with his younger brother. "I expected attractive single mothers and flirting." I would probably have hatched the same plot, given the chance. Eggers, unfortunately, sees his plan wrecked on the shoals of his fellow single parents' unattractiveness. I, on the other hand, have kept my fantasies intact.

I see myself cruising soccer practice. The moms arrive in Dodge Caravans, hulking Suburbans, Volvo station wagons with Raffi thumping hard from the speakers, kids yelping in the back seat. I'm well prepared. I have SnackWells and nonalcoholic beer, baggies full of those dwarf carrots and tiny boxes of raisins tucked in my pockets. I ogle the moms from a louche distance, voyeuristically pondering the rustle of L.L. Bean "Freeport Studio" separates against calves and biceps made sinewy by the aerobic exertions that only chasing 7-year-olds all day long can promote.

I shamble over to my quarry, who is perusing a copy of "Real Simple" on a beach towel redolent of Tide. I lay down my mojo, thick as the Welch's grape jelly I will lick from her heaving bosom in the back seat of her tinted-window SUV. I break the ice by asking if she voted for Christie Todd Whitman in the last New Jersey gubernatorial election. I suggest that maybe we've met someplace before, possibly at the big Nordstrom shoe sale.

Finally, I ask for the digits. She fishes around in the pocket of her willowy sundress and comes up with a crayon and a report card. "Call me," she whispers. I crack open another O'Doul's and offer her a pull. She tosses her nape-length chestnut tresses. She hiccups nervously -- and we're off.

As seductions go, I think it's pretty compelling. And thanks to an ever-enlightening popular culture, it doesn't even involve much in the way of imagination. Ever since Sela Ward hefted the banner, during her "Sisters" days, for foxy maternity, more than a few of us have had a thing for babes with babies under their belts. Now Ward and her dark chevron 40-something eyebrows and come-hither half-smile (her overbite alone should be declared a national treasure) are starring in ABC's hit post-divorce, single-parent series "Once and Again," and every week, I'm vibrating with lust.

When Sela hollers at her girls, I pop a woody. I had the same reaction to the Hope character on "thirtysomething": Infant on her hip, her house tumbling down around her, she still managed to embody the kind of woman you'd want to fuck so often that she'd get pregnant a few more times.

This is one of the core differences between soccer moms and supermodels: Soccer-mom fertility inflames masculine virility. Supermodels would rather smoke cigarettes and get a pedicure; soccer moms want to fuck all night (once they get the kids to sleep, of course).

For guys who share my devotion to the Lifetime cable demographic, to the siren call of the estrogen set, the best soccer mom to score with is probably the single-mother soccer mom. (Just ask Nick Hornby.) I recall fondly (and with predictable firmness) that old IKEA TV ad that featured a recent divorcie on a shopping spree for new furniture, talking about how she might even want to have a guy over to her new bachelorette pad someday. "Oh yeah," I thought. "Put the kids in front of Elmo and I'll help you break in that new mattress."

There is a saucy sensibility, calibrated with a tad of neediness and unwanted celibacy, in these women. Plus, if I am to be completely honest, they represent the whole enchilada -- sexy, appreciative women with kids and a no-nonsense approach to marriage.

Then again, I am susceptible to a melancholy reverence (and shivering horniness) when confronted by the married soccer mom. She, too, is saucy and, if statistics are correct, not averse to the stray romp with a young man. I adore her and am forced to envy her husband, one lucky dude by my measurement. Down deep, and despite my bacheloric protestations, there's a big part of me that wants to be him. After all, he gets to spends Saturdays studying the toggle of her proud soccer-mom ass as she navigates the fluorescent aisles of the supermarket, stocking up on Fruit Roll-Ups and Trix and gallons and gallons of reduced-fat milk.

And I, as the story always goes, am not alone. Ostensibly raffish single men -- real lady-killers -- have been mooning over moms forever. Does the acronym MILF (Mother I'd Like to Fuck) ring a bell? It might sound juvenile, but in truth it's an expression of desire for elegant maturity. And we are not talking here about the cross-generational couplings of a Benjamin Braddock and a Mrs. Robinson. The idea here is not to be a Young Turk out of his element with an older woman, but to be a youthful gentleman brought into his element through the ministrations of a woman bashful enough to wear a sarong, gentle enough to mop the drool from a baby's chin.

Literature is rife with images that derive from hallowed observations of soccer-mom lust. The hands-down sexiest paperback novel cover in my bookcases belongs to "The Sportswriter" by Richard Ford. It depicts sad-sack narrator Frank Bascombe's estranged suburban golf-pro wife in full, leggy, short-skirted follow-through. I stared at this cover for a solid 10 minutes in the bookstore one day, considering all the smutty possibilities. No kohl-eyed urban slattern, this one. Not a "Sex and the City" floozy, vamped out in Pat Field skankwear and bounding from sack to sack in a futile quest for love and multiple orgasms. No, this woman had made her peace. This woman had once been spoken for, but not necessarily satisfied. She had experienced contractions. She was sexy and secure. She was June Cleaver, post-Summer of Love. She was Donna Reed with a diaphragm.

And then there is the quintessential cinematic soccer mom, Joan Allen, who managed, in Oliver Stone's "Nixon," to make Tricky Dick's Pat a sort of simmering Republican sex symbol. She did even better in "The Ice Storm," where, pitted against Sigourney Weaver's New Canaan swinger, it was Joan who got shtupped in the station wagon while Weaver struggled with Kevin Kline's guilty natterings. This is the thing about the saucy soccer mom and her transgressions: When she takes the plunge, she takes it deep.

Not that I know from experience. Alas, I have never shared a fling with a soccer mom. I've never slipped that mug of herbal tea from her hand and slid my tongue between her parted, unpainted lips. I've never consummated the Lands' End swimsuit issue smut that percolates in my reptile brain.

But I am confident that the day will come. Part of the soccer-mom charm, after all, is the suggestion of attainability. And if these women constitute a viable political constituency, there can't be a shortage of them out there. I imagine that sometime I will find myself in an American suburb on a crickety evening in late summer and all the soccer moms will be sipping vodka tonics on the patio and the moonlight will be illuminating their delicate crow's-feet and the enticing strands of gray that flicker in their no-muss, no-fuss dos. It is then that I'll strike.

I just worry that by that time there will be a waiting list. It can't be long before, smitten by the Nordstrom "Reinvent the soccer mom" ads or the hottie mommy around the block, many, many fellows like me will be prostrating themselves before our bemused and eternally tolerant idols.

For the sake of fantasy, we must assume there will be enough to go around, a battalion of unconditional lovers who will smooth our rumpled khakis, run their fingers over our incipient bald spots and nurture our brains out.