Do blacks really need to work on their self-esteem? An African-American psychologist says no. 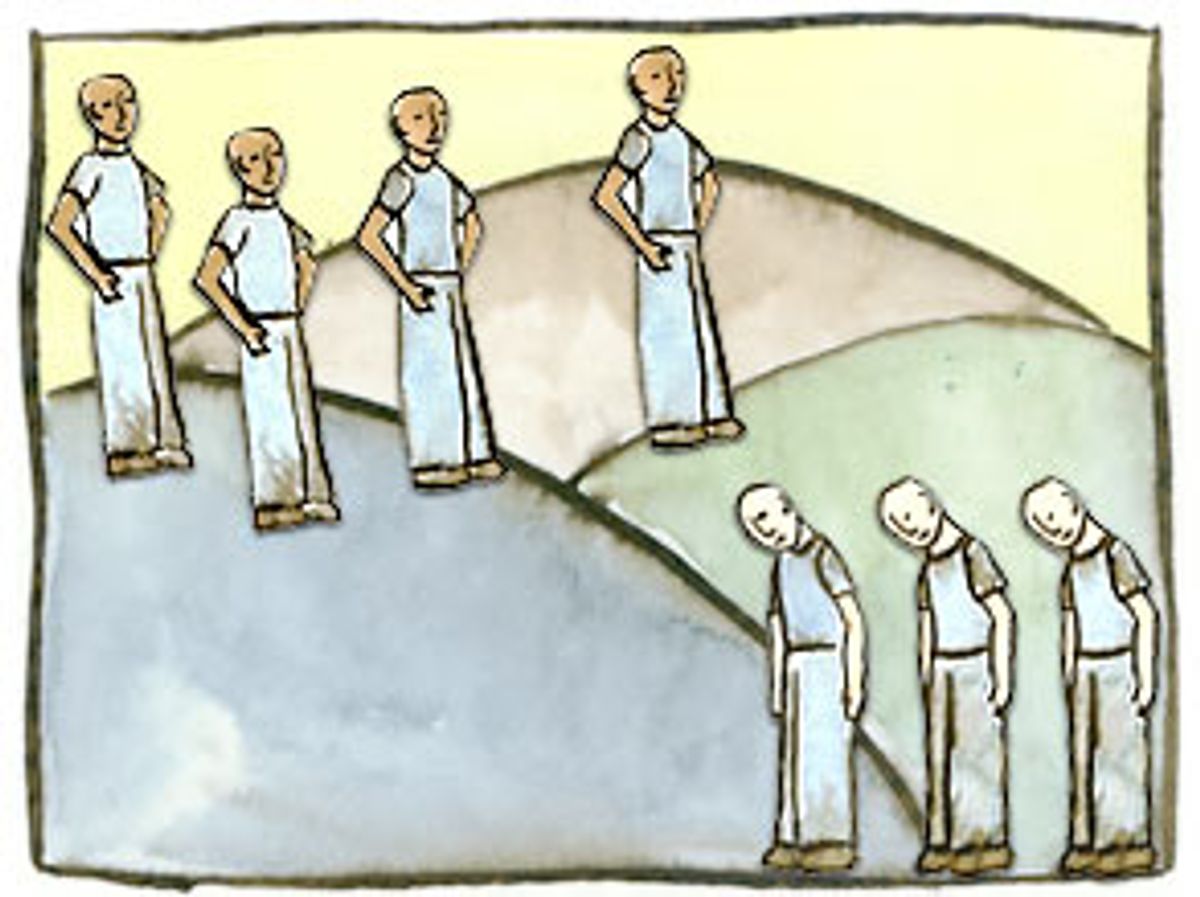 Race and "self-esteem" are inextricably bound in the popular imagination. Thanks to racism and discrimination, the theory goes, a core of self-doubt lurks in the heart of every black child and young adult. If we could only raise black self-esteem, academic and economic achievement would follow.

The evidence for this line of thinking is everywhere. At Detroit's public, all-black Paul Robeson Academy, students start the day by standing up and proclaiming: "I feel like somebody. I act like somebody. Nobody can make me feel like a nobody!" Last fall, the organizers of Denver's Black Arts Festival described their mission as, in part, "building self-esteem" in young people. And newspaper profiles of black leaders invariably point out that these people possess self-esteem -- taking for granted that it is an odd quality for an African-American to have.

Early academic research seemed to support the notion of low black self-esteem. Almost everyone remembers the work of psychologists Kenneth and Mamie Clark, who from 1938 to 1977 conducted experiments showing that black children preferred white dolls over black ones. The Supreme Court footnoted the work in the landmark Brown vs. Board of Education decision, in which the court pronounced that the assignment of black children to segregated schools "generates a feeling of inferiority ... that may affect their hearts and minds in a way unlikely ever to be overcome."

Since then, however, psychological studies of black self-esteem have offered increasingly mixed results. And the latest study may prove to be the nail in the theory's coffin. In a recent issue of Psychological Bulletin, an African-American psychologist is offering what some in the field take to be the final word on the issue. Blacks don't have less self-esteem than whites, her findings show. In fact, they often have more.

Bernadette Gray-Little, a professor of psychology at the University of North Carolina at Chapel Hill, writing with graduate student Adam Hafdahl, performed a complex review of every piece of research available on black self-esteem, 261 studies in all. Other scholars have attempted similar projects, but this study stands out for its scope and statistical rigor.

"There have been inconsistencies in the results of the studies on this topic over time," says the UNC professor, who insists she entered the project with no political agenda. "I wanted to see if I could find any basis for a firm conclusion. And if inconsistencies occurred, I wanted to know when and why."

The broad trends she discerned are fairly straightforward. Before age 10, whites slightly surpass blacks in self-esteem. Everyone takes a big self-esteem hit in junior high. After that, blacks narrowly but consistently surpass whites, through age 21, the upper limit of the study.

For Sandra Graham, a professor of education at UCLA, the study is "the definitive statement on the issue." She notes that Gray-Little's findings are surprising in that they don't "fit with the prevailing perceptions of how a stigmatized person should feel about themselves."

"The prevailing view," she says, "is that society puts you in a certain place and that influences how you feel. But the research has not supported that idea."

Making use of a technique called meta-analysis, the study culled data from many studies and treated them as if they were part of one giant study -- a method that increases the odds that the findings are not the result of chance. Gray-Little dices up the research in provocative ways. The self-esteem gap seems to vary along socioeconomic lines, for instance. Low-income blacks show higher self-esteem than low-income whites. The gap, however, disappears at higher income levels.

One of the more intriguing findings-within-the-findings is that black self-esteem has not risen over time, as many psychologists had predicted. It evidently has never been low. Whatever racism's effects -- and they are surely huge -- this study says low valuation of oneself is simply not among them.

Self-esteem is a sticky, tangled subject -- a totem of the therapy industry and a call to arms in the culture wars. Cultural conservatives grind their teeth at the mere mention of the topic. And even among academics who study it, there is debate about how it should be defined and measured.

California gave self-esteem a bad name in the mid-1980s, when its governor and Legislature signed off on a "Task Force to Promote Self-Esteem and Personal and Social Responsibility." The task force quickly became a laughingstock, triggering a backlash. A vocal group of psychologists and pundits attacked self-esteem as a fuzzy concept that could not be considered in the abstract (apart from achievement). They also argued that there was no clear link between it and achievement, since many high achievers think they stink.

In a famous paper from 1996, Roy F. Baumeister, a psychologist at Case Western University, proposed that attempts to raise self-esteem might actually worsen social problems. Criminals, Klan members and Nazis, he archly noted, all most likely suffer not from too little self-esteem but from too much.

A more moderate collection of essays on self-esteem published in 1989 by University of California professors underscored just how hard it was to turn the tentative academic findings on the subject into policy. Self-esteem proved hard to divorce from behavioral problems. Did low self-esteem cause the problems or does dysfunction hurt self-esteem? Even more vexing, self-esteem didn't always correlate with social problems in the expected way. While abused or neglected kids did show low self-esteem, for example, alcoholics and child abusers didn't seem to have self-image issues (though you might wish they did).

Despite the controversies, self-esteem remains a live topic in psychology. In 1996, the National Advisory Mental Health Council, a collection of 52 top behavioral scientists, pinpointed it as one of the most promising subjects for further research. "The policy of spending vast amounts of money to raise self-esteem was way ahead of what we know about self-esteem," argues Jennifer Crocker, a professor of psychology at the University of Michigan. "But the attack on the self-esteem movement was way ahead of what we know, also."

Crocker maintains that self-esteem is not so squishy a concept after all. It's fairly stable from childhood into adulthood in most people, she says, and it correlates strongly with depressive symptoms on one hand and with psychological well-being -- i.e., happiness -- on the other.

To Crocker, what is most provocative about the Gray-Little study is that it poses a challenge to the standard psychological explanations of self-esteem. In the first decades of the last century, social scientists like George Herbert Mead, tinkering with ideas put forward by William James, developed the idea that self-esteem was akin to a mirror. It wasn't so much an internal gyroscope as it was a reflection of other people's views, Mead and others said. People tended to take a bead on other people's impressions of them, and internalize those opinions.

Social scientists went on to apply that theory to African-Americans in a predictable way: Low social status equaled low self-esteem. For a long time, social scientists thought they had the research to back up that assumption -- namely, the Clarks' doll studies. But those studies have come under fire at least since the mid-1970s. In 1976, a Princeton psychologist, W. Curtis Banks, reviewed the Clarks' results and concluded they could have been the result of chance. Additionally, the kids in the studies often didn't understand what they were being asked to do, and often resisted making any choice at all. Efforts to study black self-esteem using surveys and questionnaires have often failed to support the Clarks' work as well.

Some critics wonder whether a quality as subtle and elusive as self-esteem can be captured by surveys in lab settings. Alvin F. Poussaint, the eminent African-American psychiatrist at Harvard Medical School, notes that black kids may have been told by their parents that they are as good as anyone else. In turn, this sentiment may show up on forms asking them if they are satisfied with themselves. But the kids may only be talking the talk.

"As a psychiatrist, I like to look at people's behavior to get a sense of their self-esteem," Poussaint says. "Let's say someone is always being self-destructive, has always given up. I work with that more than I do whether they feel good about themselves."

However, it's clearly the case that important findings in many areas, including depression, depend on self-reports. And many researchers believe that the use of surveys to study self-esteem have produced robust, replicable results.

In the new paper, Gray-Little suggests that the mirror theory of self-esteem isn't wrong. It just needs tweaking. African-Americans do, indeed, get their ideas about self-worth largely from others -- but not from "society," nor from whites. It is friends, family and neighbors who project the impressions that matter. In other words, people think globally, but get their self-esteem locally.

It's a liberating concept: White Americans don't have much say in how blacks feel about themselves. But given the turmoil in some sectors of the black community -- involving generational substance abuse, black-on-black crime, an epidemic of incarceration and a history of fatherless families -- it seems rather counterintuitive to propose that African-American children receive more reinforcement from their families and neighborhoods than whites do.

Gray-Little's second hypothesis -- that high black self-esteem may have to do with group pride -- is more convincing. Marge Schott aside, most whites don't think of themselves as part of a coherent ethnic group, nor do they get satisfaction from their ethnic identification. Yet African-Americans do, on both counts.

"Blacks, a highly identifiable social group, emphasize their desirable distinctiveness," Gray-Little writes. That, she suggests, may be enough to push blacks a nose ahead of whites.

Crocker offers another explanation. She believes that self-esteem for blacks is governed by an internal gyroscope after all. And that gyroscope is religion. In surveys, many more African-Americans than whites report deriving a sense of self-worth from their religious beliefs. For believers, she suggests, it may not really matter what other people think of you so long as God is on your side. (Religion has been suggested as part of the explanation for the mysterious black-white suicide gap, too. Nearly 20 white men per 100,000 kill themselves, compared with 12.4 per 100,000 black men.)

Today, Gray-Little's findings about race seem useful and eye-opening, but someday they may seem strangely in step with the biases of our day simply because they focus on the issue of race at all. As with almost every quality, studies show the differences in self-esteem among individuals absolutely swamps differences between groups. So perhaps future research will explore the issue freed from categories like class, race and gender.

But at the very least, her study should ring the death knell for a certain journalistic cliché. The next time Colin Powell gets written up, let's hope the profile doesn't include a line noting, in a tone approaching wonder, that the man possesses self-esteem. Why wouldn't he?