Beneath the radar, the legal dramas inspired by the president's troubles continue to play out -- and Clinton has himself partly to blame. 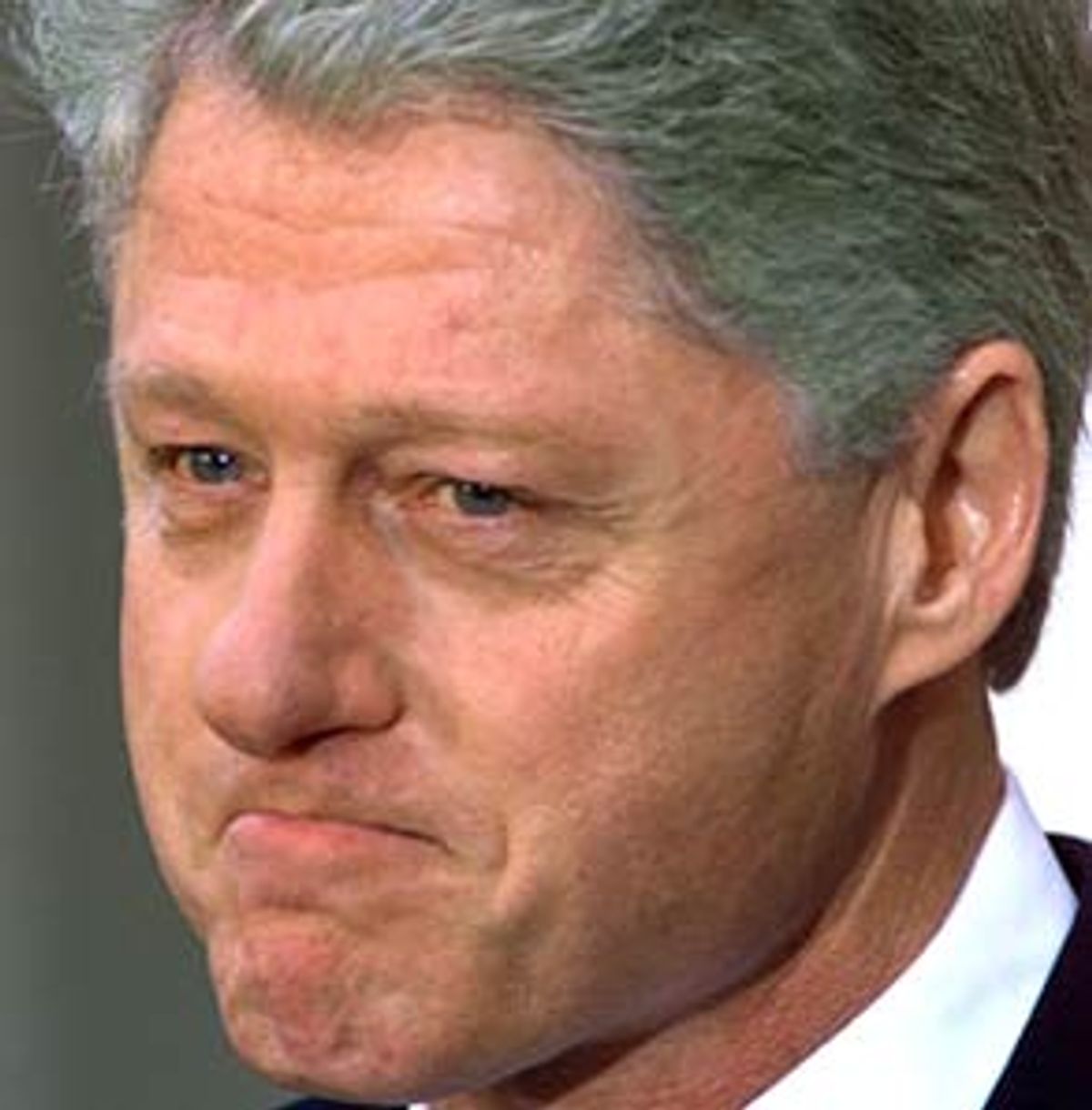 Ah, those bygone days of yesteryear. Two years ago this month, Linda Tripp was playing her tapes to Independent Counsel Kenneth Starr's grand jury, while Monica Lewinsky and Starr were still engaged in their unhappy courtship dance. Starr, meanwhile, was also trying unsuccessfully to convince the Supreme Court to shred the ancient rules of attorney-client privilege so he could review the files of dead Vincent Foster's lawyer, while a federal judge was consigning Starr's tax-evasion indictment of Webb Hubbell to the ashcan.

We can be forgiven if the open-sewer torrent of the Starr-Clinton battle seems hard to remember. It was degrading enough in the first place, keeping track of this seamy constitutional crisis night after night. On top of that, in this election year both Republicans and Democrats are anxious to make impeachment seem as far away as the Civil War. George W. Bush knows the best way to elect Al Gore is to remind voters of Starr, Henry Hyde and Bob Barr. And Al Gore knows that despite Clinton's personal popularity, there is no post-impeachment bounce for the vice president: You can't raise the specter of Starr without reminding voters of the Clinton administration's profound family-values hypocrisy, and Gore's own "no-controlling-legal-authority" evasion of his own campaign-finance peccadillos.

Yet the peripheral dramas and aftershocks of impeachment are still with us, wending their way through the court system, occasionally rising to public consciousness like a bad meal that keeps repeating on you. The Arkansas Supreme Court ethics committee's recommendation to disbar the president for his alleged lies in the Paula Jones case was just the biggest news. In case you've been distracted by trade with China, Elian's future or the Microsoft breakup, here is the post-impeachment scorecard for the last few weeks:

May 12: A Federal bankruptcy trustee in Virginia announces that uncorroborated Clinton accuser Kathleen Willey will likely be found insolvent. Among her debts: $187,000 to the lawyer who negotiated her friendly testimony to Starr's investigators. (Historical note: It was in the hopes of being bailed out of debt that Willey sought a private audience with Clinton in the first place. Bad investment.)

May 21: U.S. District Judge John Nagle in Arkansas refused to appoint an investigator to consider ethics complaints against Starr by Connecticut attorney Frank Mandanici, Arkansas Whitewater witness Stephen Smith and former Willey friend Julie Hiatt Steele. Judge Nagle ruled that Starr & Co. neither "directly nor implicitly" asked Steele or Smith to lie. (Point of amplification: Before being appointed to the federal bench, Judge Nagle was a member of the Republican National Committee and GOP Man of the Year.) Nagle still may be right; maybe Starr did not suborn perjury. But he clearly tried to pressure Julie Hiatt Steele into supporting Willey's story, by investigating her young child's adoption.

May 22: An ethics advisory committee to the Arkansas Supreme Court voted to recommend that President Clinton be disbarred, for denying he had sexual relations with Lewinsky in his 1998 deposition in Paula Jones' sexual-harassment lawsuit. (Minor addendum: The ethics committee usually has 14 members but eight disqualified themselves. And the remaining six were split over disbarment by an undisclosed margin -- meaning that Clinton's disbarment was recommended by only four or five of Arkansas' 14 Arkansas ethics monitors.) Hardly the "ringing message" claimed by Matthew Galvin, the Southeastern Legal Foundation attorney who brought the complaint.

May 24: Maryland prosecutors dropped wiretap charges against Linda Tripp after state Judge Diane O. Leasure threw out Lewinsky's testimony. Lewinsky's recollections of the conversations secretly taped by Tripp were "influenced by Starr's staff," the judge ruled. (Query: Is it beyond imagining that Starr's staff cleverly made sure to "influence" Lewinsky sufficiently to queer any future wiretap charges against Tripp?)

May 26: The U.S. Appeals Court for the District of Columbia ordered the White House and FBI to release everything they have on Willey to Judicial Watch, which is suing the Clinton administration on behalf of some of the individuals whose FBI files were procured by low-level operatives in the administration's earliest days. (Gratuitous aside: Judicial Watch and its ringmaster Larry Klayman seem to have a thing about fishing expeditions. The latest addition to JW's client roster is Miami's El Pescador himself, Donato Dalrymple.)

One thing that should be obvious from this scorecard: While the president enjoys the highest term-end ratings since FDR, in court he and his allies are faring poorly. Clinton's enemies never had the chops for the grand scale of impeachment or criminal indictment -- and don't expect anything more effective from post-Starr Independent Counsel Robert Ray. But in the low-standard-of-proof environs of civil court, the administration's many lies and evasions provide enough fodder to fuel the fax machines and evidence-trawls of the obsessive, not-so-vast conspiracy of right-wing legal associations.

What is more, this recent sequence of rulings, dubious though some may seem, do amount to more than just a bucket of bad gas. The issues raised by a constitutional crisis, even something as seamy as Monicagate, don't vanish because the combatants who unleashed them cry basta and flee the arena. While impeachment may be over, there are significant issues still in play.

The question of how Clinton should be punished for lying under oath, for instance, is real. After pondering Clinton's case privately and in print for the last two years, legal ethicist Stephen Gillers of New York University Law School is convinced that the president's deception "was serious enough to warrant suspension of his law license," perhaps for as long as a year.

But pulling the presidential bar card for good? "Look, what we have is a guy who lied under oath about consensual sexual relations, in litigation he could reasonably view as only marginally relevant -- Judge Wright later reached the same conclusion," Gillers says. "That conduct, while deserving of punishment, doesn't [rise] to the level that the judiciary must redeem itself by purging him altogether."

Clinton's disbarment proceedings will have a predictable media arc. But the surprise news story of the year may yet turn out to be that idiosyncratic ethics complaint against Starr by attorney Mandanici, whose day job is as a public defender in the scrappy courtrooms of New Haven, Conn.

Mandanici, you'll recall, tried to convince the federal courts in Little Rock of Starr's conflict of interest in prosecuting Whitewater while working as an attorney for tobacco companies, at the time locked in their own vicious legal battles with the Clinton administration. Starr didn't even deign to respond to Mandanici's charges, instead arguing that the Connecticut lawyer had no interest in the Whitewater prosecution and thus no legal standing to bring the complaint. Mandanici eventually piggybacked his charges on Steele's and Smith's.

Ironically, Judge Nagle himself, in throwing Mandanici, Steele and Smith out of court last week, may have breathed new life into the complaint. The judge did not take kindly to some of Mandanici's comments to the press, and in his ruling last week charged that the attorney himself "might merit discipline and sanctions." Judge Nagle also blasted Mandanici for failing to "substantiate" his ethics complaint.

That threat by Judge Nagle, Mandanici believes, amounts to a "reprimand" which for the first time gives him a direct interest and thus unexpected standing for an appeal -- where his conflict-of-interest charge could find a more sympathetic audience.

While that appeal may seem a long shot, ethicist Gillers thinks Mandanici has a point. Judge Nagle's threat "sits poorly" with the tradition of legal ethics investigations, he says. "If you put lawyers at risk for bringing important questions to the attention of a court, they won't do it." And he adds that it would be equally dangerous to impose a burden of proof on individuals who bring ethics complaints. "The court system has to make its own determination of facts."

If nothing else, the last few weeks' small stream of Clinton cases are reminders of both the long memories and vindictiveness of the president's enemies, and of the damage caused by Clinton's own private abuses and public lies. These cases are also a warning that while Clinton may have survived impeachment, in some very important sense the legal right wing won.

Republicans like Sen. Orrin Hatch have finally removed some roadblocks to Clinton's federal court nominations, for instance, but he will leave office with the judiciary still dominated by conservative Reagan-Bush nominees. Tobacco regulation and negotiations with handgun manufacturers are on the rocks, healthcare reform is nonexistent, affirmative action remains in retreat and gays in the military are worse off today than when Clinton took office. Clinton is now a caretaker president, his administration's only large-scale achievement the corporation-pleasing unleashing of international trade.

Curiously, both the pro- and anti-Clinton camps represented in all of the various lawsuits on stage in recent weeks seek one thing: vindication. Bill Clinton and Ken Starr stand retired above the fray; while their lawyers, friends, victims and accidental allies, muddied, bloodied and degraded, fight for some small footnoted validation from the history books yet to be written.