Learning to love your geek

"The Geek Handbook" is a handy how-to manual for keeping him or her in good running order. 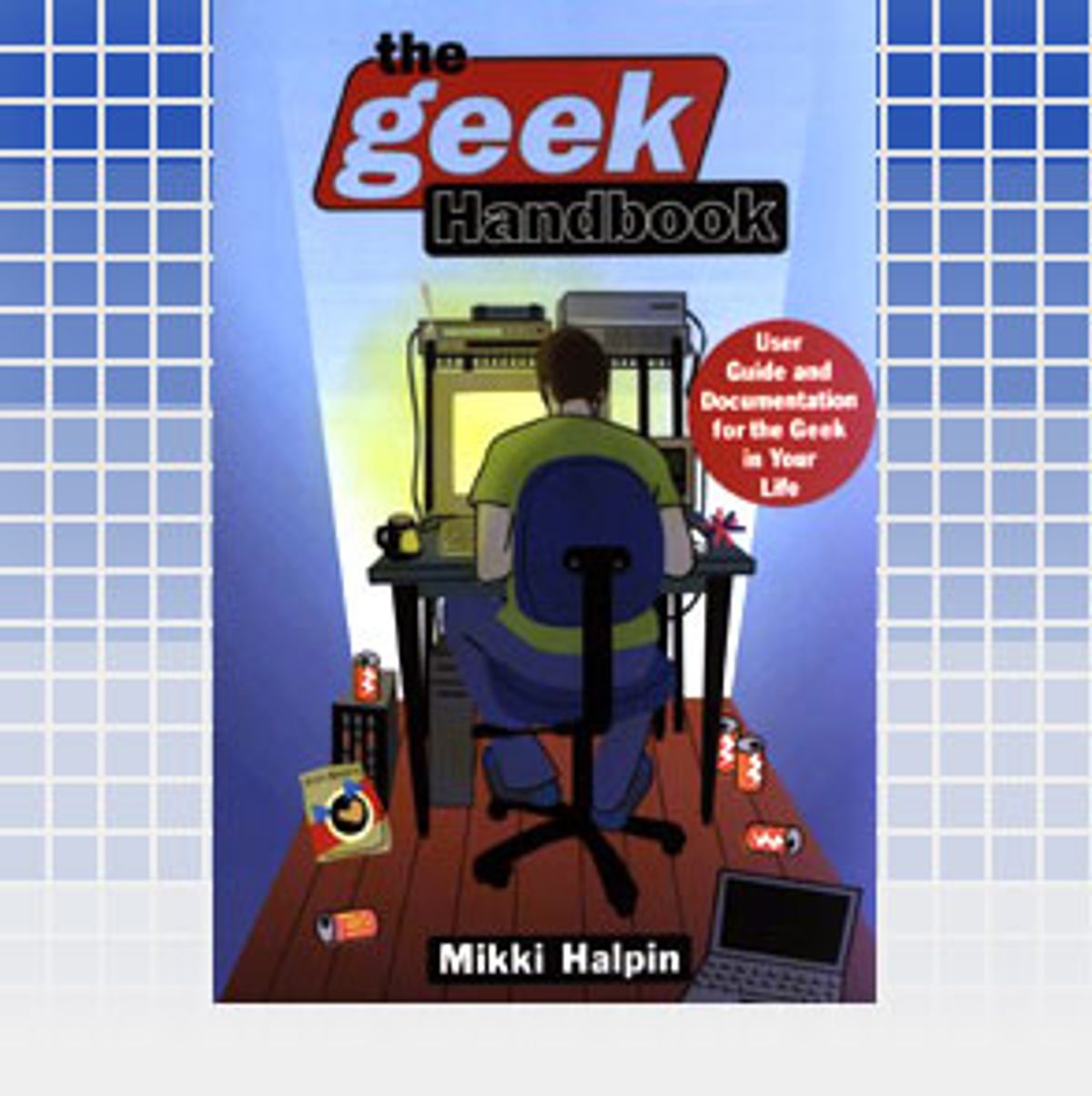 We live in the age of geek mystique, a time when the technologically savvy command high salaries, big perks and glossy magazine covers. One of the drawbacks of geeks' rise to glory is that even their sex lives are examined in excruciating detail: Geeks have been labeled heartless gold diggers, free-love exhibitionists and sex-starved romantic failures. The last stereotype is the most common; as popular culture would have it, real geeks -- the ones who compulsively log on to Slashdot to debate the merits of Linux vs. FreeBSD and who have credible mastery of the command line -- are hardly Don Juans.

Take, for example, the three geeks with whom I recently shared an elevator on my way to the office. Two of these fine members of the species sported -- unironically -- taped-together eyeglasses and belts full of the latest wireless communication gadgetry. "I shouldn't have stayed up until 4 a.m. playing Torment last night," groaned one bleary-eyed geek as we slowly rose toward his office floor. "Don't even get me started," moaned another, dubiously attired in an ancient motorcycle jacket airbrushed with the names of long-defunct punk bands.

No, not what some of us might envision as prime relationship material. But the truth, according to Mikki Halpin, is that geeks are just misunderstood. As Halpin points out in her delightful new book, "The Geek Handbook: User Guide and Documentation for the Geek in Your Life," geeks are in fact wonderful people, despite their quirks and occasional outward bugs. And although geeks can be baffling creatures, as Halpin explains, with proper care and feeding they can become the most "important assets" in your life.

"Historically, geeks have been feared and ostracized because they are containers of exotic, arcane knowledge unavailable to ordinary humans," writes Halpin. Her tongue-in-cheek book aims to dig beyond the stereotypes and the oddly antisocial behavior tics to "demystify" these special creatures. It serves as both a field guide and an ownership manual for those with geeks in their lives, offering an encyclopedia of geek behaviors, habits and bugs ("low blood sugar, a frequent need to play arcade games") as well as feeding and maintenance tips. Clocking in at 112 pages, this slim manual is a dead-on and deadpan description of the geek lifestyle; if you in any way work with, live with or love a geek, it would be worth your while to pick it up -- even if just for comic relief during those moments when you're ready to throw their computers out the window in frustration.

What is a geek? Halpin doesn't define the term but instead provides a three-question quiz to help determine geekdom. The geek in your life doesn't necessarily have to be your programmer girlfriend or the systems administrator buried under pizza boxes in the back of the office. He or she can also be that neighbor who insists on wiring up the entire street with fiber optics or a parent who recently discovered the Internet. (This one rang true to me.) With fresh parental geeks, for example, you'll watch "phone calls decline as e-mails proliferate, including numerous virus alerts and the Neiman-Marcus cookie recipe." The common threads between geek types are tenacity, computer addiction, a fanatical obsession with tiny details and a vaguely antisocial bent. Programming and all-night gaming are just small symptoms of the basic personality.

Once you've determined which geek you "own," you can peruse the rest of the book for useful tips, including charts, a witty geek history (dating back to the invention of the abacus, circa 3000 B.C.) and sample dialogue for tricky situations. Halpin frequently uses a longtime geek favorite, "Star Trek," as an interpretive tool for explaining the geek personality. One chart, for example, explains how the part-man, part-machine android Data is a rich text for the deconstruction of your geek's needs and aspirations. (To wit: Data's limitless and foolproof memory is indicative of your geek's striving for perfection.) Also handy are her diagrams explaining a geek's moods based on his or her mouse grip, degree of shoulder hunch (extreme angles equal extreme moods) and the number of Coke cans scattered about the workstation.

Communication continues to be a difficult challenge with most geeks, and Halpin also generously tackles this issue. The key to interacting with your geek is to learn to speak his or her language, she explains -- defining personal improvements as "upgrades" and bad habits as "nonproductive feedback loops." It's simply a matter of using the right encouragement. Don't tell him he needs to get some exercise and lose some weight; tell him that he will be better prepared for all-night Doom marathons if he is in better physical shape. It's all about becoming more "efficient."

Better yet, steer an exercise-deficient partner toward more geek-friendly exercise routines such as fancy gym machines with data screens or kung-fu-style acrobatics like Tae Bo. (Extreme sports, she explains, also offer "some kind of physical analog to the thrill of installing Linux or other open-source operating systems.") Or trick a Nintendo-addicted geek into cleaning by making it seem more interactive: "Leave him little notes and riddles around the house which will make his household chores more fun." (Halpin, to her credit, also notes that geeks come in both genders; the book switches back and forth between examining the males and the females of the species.)

Halpin also offers useful maintenance tips for getting around your geek's hang-ups and malaise, such as the dauntingly popular "Start Up Syndrome" that impels geeks to think it's a good idea to start their own Internet company. Halpin is ultimately so sharp in her semi-ironic observation of geeks' habits that you can't quite decide if she herself is a geek or if she has just gone out with an awful lot of them. As she writes (from experience?), "Geeks have been known to date nongeeks for less than honorable reasons: a nongeek lover can provide many excuses for equipment purchases ('to get you up to speed') and are easily technically snowed."

Of course, if you yourself are a die-hard geek -- especially one of the "humorless" variety -- you may not find yourself so amused by some of Halpin's antics. Some certainly won't cotton well to the notion of being slightly nutty pets manipulated by their "owners." And, in fact, the book's loving deprecation of geek habits might deter some from association with geeks forever; despite her assurances that geeks are in fact valuable commodities, devoted partners who love children and are very useful with a toolbox, after reading "The Geek Handbook" you may find yourself thinking that anybody who puts up with the thorny geek personality is slightly insane.

Which, of course, we are. But you do what you have to do in the digital age. "Honor all geeks for what they bring to our lives," writes Halpin. Adapt or perish.