Jeff Buckley: a cult in the making?

He was an ethereal, darkly handsome singer-songwriter who died young. And that's how legends begin. 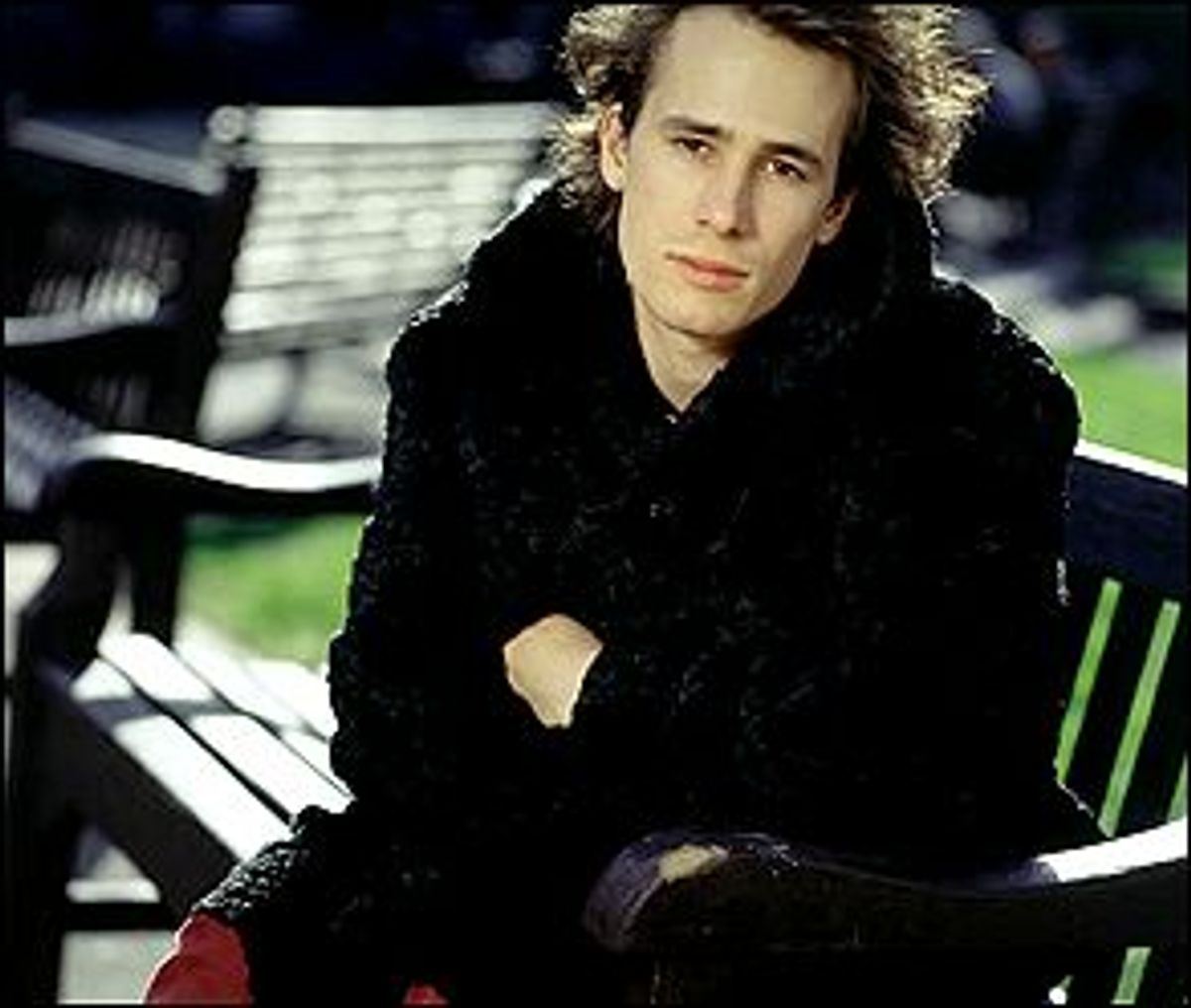 On May 2 several hundred people gathered in hushed deference at a synagogue in New York's East Village known as the Angel Orensanz Foundation. They were in their 20s, mostly, split equally along gender lines. They had come to celebrate the release of a new concert video and live album by Jeff Buckley. It was an appropriate venue to honor the artist, who, before his untimely death in 1997, created music as cavernous and haunting as that synagogue.

During the course of the evening Buckley's mother, Mary Guibert, as well as his former bandmates, guitarist Michael Tighe and drummer Matt Johnson, fielded questions from a crowd eager to learn about the life of their departed hero. The audience was also treated to an advance screening of the concert video, "Mystery White Boy," recorded during a 1995 show at Chicago's Cabaret Metro.

When the lights dimmed and the celluloid Buckley took the stage, an audience member later recalled, "people reacted as if it was a real concert, clapping after the end of each song until they self-consciously realized it was just a movie."

This was not the first time a group had convened at the synagogue in Buckley's honor. Six months earlier, the third annual gathering to celebrate what would have been the artist's 33rd birthday (Buckley was born Nov. 17, 1966) was held. Again, as in past years, Guibert gave an impassioned speech to fans, and his former bandmates and friends told Buckley stories to an audience whose appetite for detail could not be satiated. And again, the crowd was given a rare treat, this time in the form of a concert by artists who had been influenced by Buckley's music (some of whom, like British electro-folkie Beth Orton, had never had any personal contact with the singer).

These East Village gatherings are only the most visible evidence of a collective coming together of Buckley's fans since he drowned in the Mississippi River three years ago on Memorial Day weekend. Some might even see them as signifying a nascent Jeff Buckley cult.

But interest isn't just relegated to the fringes of the Web. On May 9, Buckley's label, Columbia Records, released both the "Mystery White Boy" video and a live CD of the same name culled from various performances during the singer's short but influential career. Counting "Sketches for My Sweetheart, the Drunk" (the demos for what would have been Buckley's second studio effort, released as a double album a year after the singer drowned), this marks the third full-length release (including the video) since Buckley's death -- the same number of releases Nirvana has issued since the death of Kurt Cobain.

And while Nirvana sold millions of records, "Grace," Buckley's only studio album released during his lifetime, has sold a mere 307,000 copies to date, according to Soundscan. In an industry where multiplatinum records can be considered commercial failures, "Grace's" numbers sound downright paltry. In fact, according to David Browne, music critic at Entertainment Weekly and author of the upcoming book "Dream Brother: The Lives of Jeff and Tim Buckley," Columbia has made little money from "Grace" and the album has yet to make a profit for the singer's estate.

So why continue to release albums? True, Buckley was signed to a three-album deal, yet Columbia's legal obligations ended with his death. Certainly a major reason is that Buckley's mother, who controls the estate, has worked tirelessly on her son's behalf. "Mary has done a great job of listening to the fans and opening a direct line of communication," says Columbia executive Greg Linn. "Her involvement means it's less about a big corporation dictating what the fans will hear and more about Mary and the band giving the fans what they want."

It was Guibert who, during the confusing period after Buckley's death, supervised the release of "Sketches," making sure the album wasn't rushed to market to capitalize on the media attention surrounding her son's death. Guibert also defended the band's belief in releasing the intimate four-track demos that make up much of the second disc. Understanding that the power of Buckley's music was best captured in a live setting, it was also Guibert who brought the idea of the "Mystery White Boy" live CD and concert video to Columbia.

"I put together a listening committee and offered the idea that we not edit the spaces in between songs," Guibert says, "so that people could see the concert as it happened, with Jeff talking and not quite hitting notes and all the little flaws that make it real."

Although some Buckley fans resent Guibert for her control over the estate and her hard-line stance against bootlegging, for an artist who released just one album during his lifetime (not including the 1993 four-song EP "Live at Sin-i") and could've easily been forgotten, having the strong-willed Guibert in his corner has kept the singer's profile high and his music relatively ubiquitous.

"I never wanted to be Jeff Buckley Inc.," says Guibert. "But I feel very strongly that I have a mission to care for these recordings and release them in a respectful way."

Buckley would have cringed to hear it, but he may have been fated to become a cult artist. It was in his blood. His father, Tim Buckley, was a sweet-voiced '60s singer-songwriter who, as his career progressed, increasingly embraced the avant-garde fringe, much to his record label's chagrin, before dying of a heroin overdose in 1975 at age 28.

Despite Buckley's having met his father only a few times, he inherited more from him than a powerful voice and dark, brooding good looks. In the years after Tim Buckley's death, a small but staunch following grew around the singer's life and eclectic body of work. Not surprisingly, before Jeff Buckley ever sang a note, comparisons with his father were already flying.

In a letter reprinted in the liner notes of "Sketches," Buckley wrote, "They will accuse me of stealing from my father. They already stand in baited judgement, waiting for my first move, waiting to dump their loads of garbage on me."

"He was aware of the pitfalls of Tim's career and he was very wary of being compared to Tim," says Browne, who was one of the first journalists to interview Jeff Buckley.

But for fans of Tim, Jeff's presence -- indeed, the mere existence of a father and son who were both darkly handsome, highly talented, ethereal singer-songwriters -- was too ripe to avoid mythologizing. Jeff Buckley's accidental death (at the hands of the mighty Mississippi, no less) just as he was about to record an album that might have led to breakthrough success cemented the myth of a fated existence -- a calamitous finale of Greek-tragedy proportions.

Even Browne, who originally set out to write a book solely about Jeff, had to acknowledge the serendipity in the lives and untimely deaths of Buckley and his father. "Given the way his father died and what I knew about [Jeff's] life through interviewing him, set against the backdrop of his family I thought it was quite a story."

Yet beyond his family history, Buckley possessed another quality common to musicians with cultlike followings. The music he made, a moody, often orchestral synthesis of blues, Led Zeppelin-inspired classic rock and the exotic sounds of Eastern compositions, existed outside the world he was recording in.

Like the music of Nick Drake, an early-'70s folk poet with whom he's sometimes compared, Buckley's music seemed to draw from some inner wellspring completely unattached to what was happening at the time. "You have to remember," offers Browne, "when 'Grace' came out in 1994 it was the time of Lollapalooza and grunge. Jeff was covering Edith Piaf and writing songs about emotional vulnerability."

Indeed, compared with the feedback squeal and obtuse lyrical vision of his contemporaries (Nirvana, Soundgarden, Smashing Pumpkins), Buckley's articulate compositions and often gentle, esoteric choices for cover material sound as though they're from another place entirely. By fusing his influences so completely Buckley created his own genre. When he died his unique sound died with him.

It's ironic, then, that so many people continue to hold on so tightly to a man who was barely here to begin with. There is something undeniably fuzzy about Buckley's physical presence; he never quite belonged to the corporeal world. Trying to understand who Buckley was is like stepping in quicksand: The deeper you go the murkier it gets, the more bottomless it seems. "Mystery White Boy" indeed.

Buckley didn't release his debut album until 1994, meaning 28 of his 31 years were spent out of the public eye. And even when he started doing interviews, he was often tight-lipped regarding his past and the particulars of his life. Beyond Guibert's efforts to preserve her son's memory and the mythos of the Buckley legend, perhaps it's his elusive quality that makes the singer appealing to so many.

Whereas Cobain graced the covers of Rolling Stone, Vanity Fair and a dozen other magazines, and writer Michael Azerrad authored a book exhaustively detailing the minutiae of Cobain's life and his every motivation, Buckley remains, more or less, a mystery, even to those who knew him. What could be more seductive?

In researching his book Browne admits he encountered numerous conflicting accounts of the singer's life and personality from Buckley's friends. "People had so many different impressions of him," Browne says. "He had all these different groups around him that never overlapped. He was a complex guy and he had a complex story."

With Buckley's death, the trail leading to the truth of that complex story gets colder each year, and muddied by sentimentality and forgetfulness. Today, Buckley's fans are as interested in trading stories about his personal life as they are in swapping his music.

They ask questions like, "Was Jeff gay?" Or they debate endlessly whether Guibert is angel, devil or both. Hardcore Buckley followers are by turns obsessive, endearing, suspicious and accepting. Part detectives, part music lovers, they communicate in chat rooms and through e-mail, hoping to gain a greater understanding before Buckley's story slips away as quickly as he did.

"Since there will never be a new album, there is a certain desperation to being a Jeff Buckley fan," says Andrew Debes, one of the singer's devotees. "The conversations among fans can get microscopic," he admits. Such as, "'Did you notice that from the November 14 show to the November 15 show [Jeff] changed the lyric on a particular song?' That sort of thing."

With Columbia's contractual obligation fulfilled, the question remains: Will the label continue to release Buckley's archived material? In its first week of release, "Mystery White Boy" sold only 11,000 copies -- cult sales figures for sure, but not exactly the kind of numbers that will have the suits at Columbia dancing in the halls, or running to the boardroom to plan the next Buckley release. Guibert, however, insists there is more worthy material to come.

"I have 12 full-length concerts that I could release right now," she says. "I'm confident that I'll find a vehicle to release these recordings. I would like to see the sun set on this project."

Given that grain of hope, Buckley fans have taken to the Web and the "Eternal Life" mailing list to debate just what it is that Guibert is alluding to. Are there more tapes from the "Sin-i" sessions? Do more live recordings from Buckley's European tours exist than was first assumed? Could he have recorded four-track demos beyond the ones released on Disc 2 of "Sketches"?

The answer is a mystery, but then, if you're a Buckley fan, the mystery is the attraction.

Steve Kurutz is a writer in New York.