For a mainstream Republican, Rep. Rick Lazio's politics are awfully similar to those of "left-wing" Hillary Clinton. 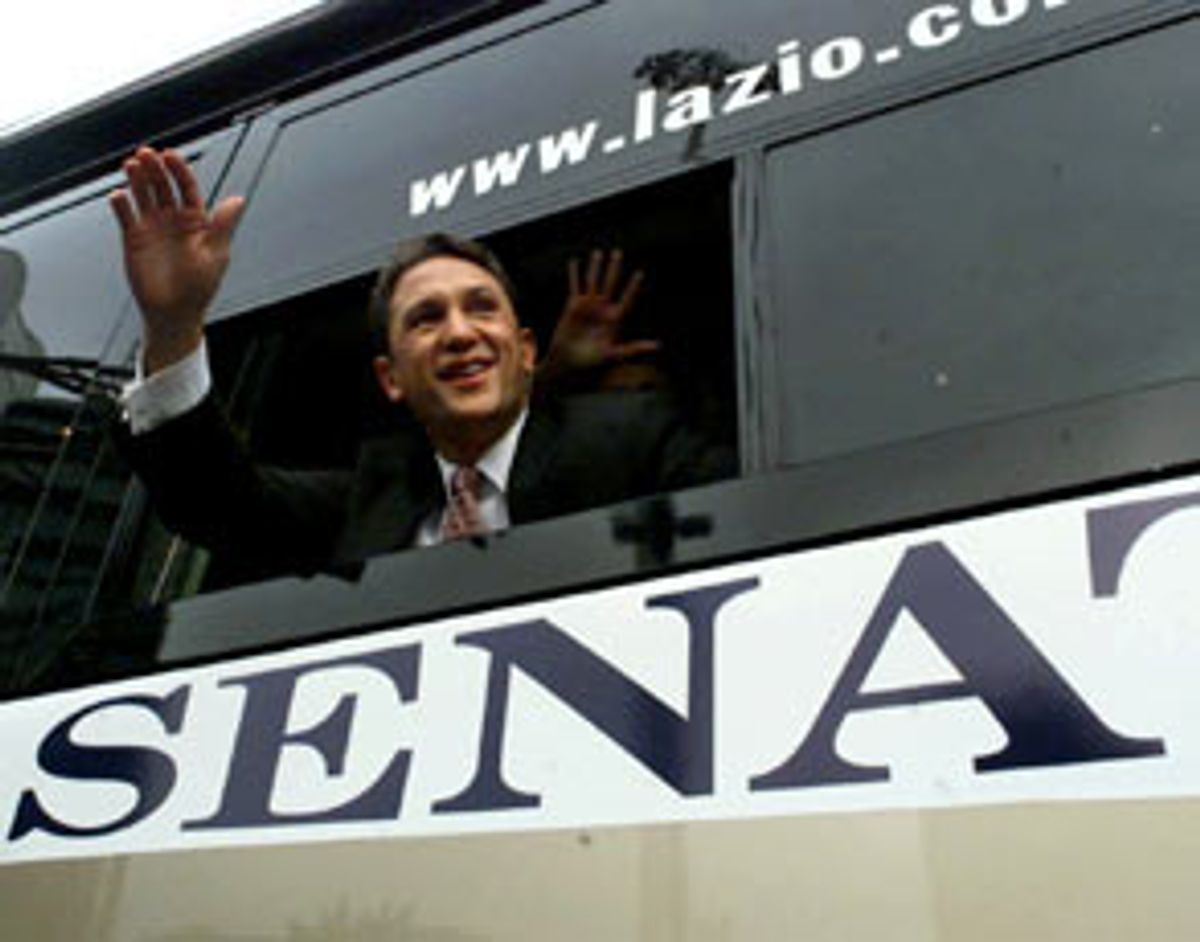 It was supposed to be the proverbial War of the Worlds: Rudy vs. Hillary. The big bad Republican mayor vs. the Democratic first lady. Alas, high-minded observers opined, this is just a race about personality. These two agree on too many issues, the pundits complained. So, Rudy dropped out and Rick Lazio, a Republican congressman from Long Island, stepped in. The pundits rejoiced. Now the contest would be between a real Democrat and a real Republican. There would be real disagreements about issues of substance.

They spoke too soon.

As Lazio spent Wednesday and Thursday touring upstate New York on his fittingly named "Mainstream Express," it became less clear whether things had really changed in a substantive way. As his bus snaked through upstate New York, one couldn't help but wonder whether he, like Rudy Giuliani, has the political positions to stand out from Clinton or anyone else.

Despite Lazio's laudable efforts to make himself more accessible to the media than the annoyingly press-shy and poll-tested Hillary Rodham Clinton, efforts to pin him down generally failed. Indeed, at times he sounded eerily like his Democratic rival.

As the "Mainstream Express" creeped down Second Avenue on Thursday, en route to Katz's Delicatessen, Salon asked Lazio: How are you different from the "left-wing" rival you hope to defeat in November?

"I think there's a lot," he said, striking a more serious note. "I've been serving for eight years. I've been a legislator. I've been working in a bipartisan way. I've been out working on issues unique to New York. I don't have the White House behind me. We travel differently ..."

Enough, already. Is there anything of substance to contrast the two?

"Well, probably health care," Lazio responded. "I believe in the 'public-private partnerships.' I think we can extend healthcare using the number of different tools without turning it over to sort of a faceless bureaucracy that will make things worse."

That answer was easily anticipated. Fair enough. But here are the facts: Both Lazio and Clinton support gun control, the death penalty, welfare reform, abortion rights (albeit with several onerous restrictions, in Lazio's case, like his opposition to Medicaid-funded abortions), free trade and an increase in the minimum wage. Both oppose gay marriage, etc., etc. So are there any areas where these candidates clearly differ? Pick one, congressman. Any one.

"I think people just need to look at my record and what I've done and make judgments based on that," he said. "I would rather focus on that because I think that builds more positive momentum for me than focusing on what Mrs. Clinton hasn't done. So I'd like to spend more of my time focusing on the positives of cleaning up the Long Island Sound, the Hudson River, dealing with acid rain in the Adirondacks; making sure that we have incentives for job creation; using our universities more effectively and our national labs more effectively for research; making sure that we address high incidences of mortality rates for cancer."

Reducing acid rain? Job creation? Surely Clinton supports all of these proposals. Indeed, they seem precisely like the types of uncontroversial issues that Hillary ("I've-spent-30-years-working-to-help-families-and-children") Clinton would embrace. Is there any other difference?

"You can look to my record," he said. "You can determine what kind of senator I would be by what kind of congressman I've been, passing (legislation) in a bipartisan way. Being a centrist, legislating, doing the hard work beforehand, not shooting from the hip, building credibility, building bridges."

Still not convinced? We tried.

All of this may not matter to upstate voters.

It's Wednesday afternoon at the Corning Glass Museum in Corning, N.Y., (pop. 12,000). Lazio gets off his bus, his wife Patricia at his side, and wades into a cheering crowd. Theresa Johnson, a retired nurse who lives on a farm in nearby Addison, clutches a pair of red, white and blue pompoms and cheers the youthful Long Islander on.

"I think he's a great family man," Johnson says. "I like his issues."

"He's for family," she explains. "He's for good education and I think he has his eye on some environmental issues."

And the first lady?

"No. No. No," Johnson says, shaking her head. "She's just a politician, and I think she just wants to use us in New York."

A few hours later, we arrive in Elmira, N.Y., (pop. 33,000). The Mainstream Express has made its way to the lush green campus of Elmira College. Graduation is four days away and a crowd of Lazio supporters are getting down to James Brown's "Living in America," which is blaring from the bus's speakers. Lazio, sporting an Elmira baseball cap and a pink polo shirt, is autographing campaign T-shirts.

Lois Kirkendall, a retired librarian who lives in nearby Horseheads, is taking it all in through oversized sunglasses. She grasps a tiny American flag and explains that she is a registered Republican but voted repeatedly for Daniel Patrick Moynihan, the outgoing Democratic senator whose seat Clinton and Lazio are vying for. Kirkendall says she will for Lazio.

"It's the first time I've seen him, and I think he'll do fine," she explains. "He's a New Yorker and we need a New Yorker. I do not believe he's an elitist."

And how about Hillary?

She peers out from under her straw sun hat and looks at a reporter as though he were daft. "You heard me," she instructs. "I think she's been quite an enabler. She could've saved this country a lot of money by facing things a lot earlier. I don't have a lot of sympathy for these women who say 'I'm a poor victim.'"

That's not all: "I didn't care for the secrecy about the health plan. And then they lied! I didn't like her with Gennifer Flowers. That put my ears up, she had to know those things!"

And there is an air of Clinton sleaze that she won't abide: "Did you read today that (Juanita) Broaddrick," who last year accused President Clinton of rape, "is being investigated (by the IRS)?"

Now, this should not suggest that Lazio and Clinton are identical twins. Lazio's hometown paper, Newsday, analyzed the congressman's voting record and found that, until the Newt Gingrich-led Republican revolution of 1994, he frequently supported President Clinton. After that, however, he started backing his party's congressional leadership with greater frequency. (An editorial in the same issue of Newsday ran with the headline "Hillary's foe has record of moderation, equivocation.") Not exactly a screamer.

Asked about this apparent tendency to get along, the ever-moderate Lazio denied it.

"I don't think its true," he told Salon.

"In terms of voting ... I am right in the middle ... which is exactly where I was when I started. I supported national service. I supported family and medical leave. I supported the environment -- I support the environment now. I support tax relief and balanced budgets. But I also support helping disabled Americans, helping the homeless, helping public housing residents, and I think that's the mainstream electorate, and if it isn't then I don't know what a moderate is."