With this ring, Shaq emerges

Compared to other players, rather than to his own supposed potential, he's one of the best ever. When he wins a championship this month, fans will take notice. 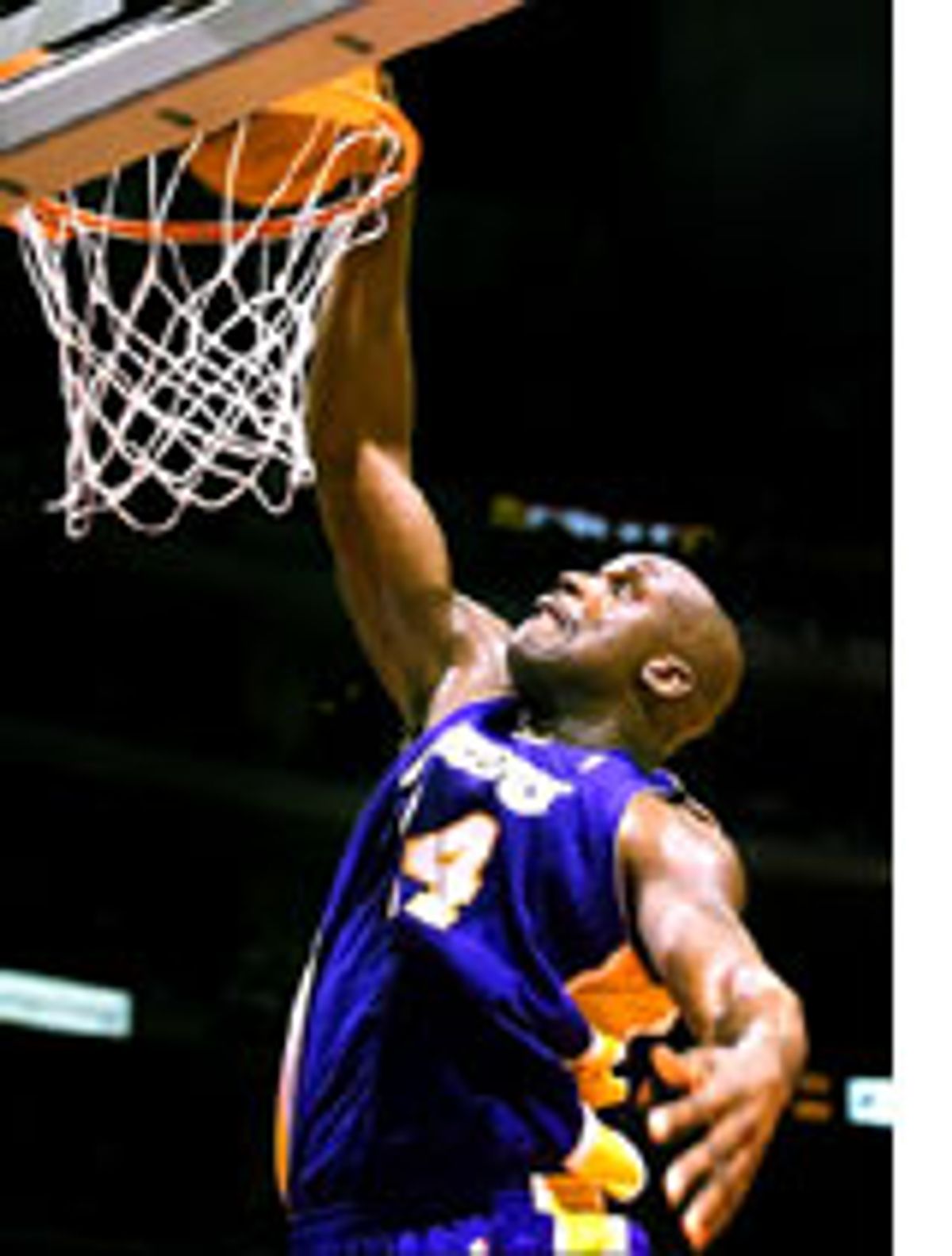 Has any Hall of Fame basketball player waited for a certification of greatness longer than Shaquille O'Neal has? As I write, the Portland Trail Blazers have extended their playoff series with the Los Angeles Lakers at least one more game, and then there's the Finals with either the Indiana Pacers or New York Knicks, neither of whom could have made it past the top four teams in the league's Western Conference.

This will leave the Lakers and Shaq in something of a no-win situation: "They finally won a ring, but only against a second-rate opponent" is bound to be heard on talk radio everywhere. Of course, this is unfair if only because of the quality of opposition the Lakers had to face to get to the Finals; but it will be said just the same, particularly if the Lakers win easily. Worse things will be said by many more if they don't win at all.

Greatness in the NBA is validated by championship rings. That may not be fair, but that's the way it is. And there's some justification for this, more than in other sports. Kirby Puckett or Ernie Banks can be great and have little overall effect on their team's chances of winning a pennant; they are only one of nine. In basketball you're one of five and you can bat as often as your team will let you. If you're the best player on the court, you're expected to have the biggest impact. And impact is ultimately measured by how heavy your hand is from all those gold rings. Michael Jordan and Karl Malone were, judging from their regular season stats, comparable players; when the post-season was over, Jordan was the heavy-handed one. The Mailman never delivered.

Fans have been expecting O'Neal to deliver since he came out of college. No NBA player in the modern game has been so consistently judged not by what he has actually done (which, in Shaq's case, has been considerable) but by what he was expected to do. And when he didn't quite deliver, it just had to be because he wasn't working hard enough. Remember a few years ago when Mike Lupica, citing Shaq's rap records and movie appearances, admonished O'Neal for "stretching himself too thin." That was the same Mike Lupica, by the way, who was writing a weekly newspaper column, one for the Sporting News and one for a national monthly magazine, appearing on Don Imus' radio show and on ESPN Sunday mornings, and writing lousy crime novels.

Criticism of Shaq's play, of course, has always centered on his relative lack of success at the foul line. "Why can't he practice more?" is the litany, which is funny, usually, because Shaquille O'Neal has probably, by now, shot more foul shots than any 28-year-old in world history, and if he can't shoot them well it would be logical to assume that there is some physical reason (vision, balance, etc.) responsible for the flaw.

In any event, much of the criticism of O'Neal has had to do with the "big man" syndrome, or the idea that became popular in Wilt Chamberlain's prime that because players such as Chamberlain and O'Neal are so big -- yes, they are all big, but Wilt and Shaq are really so big -- that it all comes easy for them. It was best expressed in John McPhee's pompous "classic" about Bill Bradley, "A Sense of Where You Are." Wilt was never mentioned by name, but "those who have never seen Bradley play are likely to assume that he is seven and a half feet tall -- the sort of elaborate weed that chokes the game."

Chamberlain, who also had trouble with foul shots and who was nonetheless the most dominating player in pro basketball history, the man who brought more interest to the game than anyone before Magic Johnson and Larry Bird, was "choking off" the game! To McPhee, the coming of Bradley meant that "the age of the goon is over." By "goon" I don't think McPhee meant Bill Russell.

The idea that a huge man who is slow, uncoordinated and stupid could not dominate basketball games doesn't seem to have occurred to McPhee or to any of Shaquille O'Neal's critics. Ever since he left LSU he's been plagued by the twin demons of overhype and underrate - i.e., too much hype over what he should be and not enough appreciation for his ability to shoot, rebound, block shots and pass. He has probably never been the best player in the game; Michael Jordan and Hakeem Olajuwon held that distinction earlier in his career, and Tim Duncan, when not hobbled by injury, probably deserves the unofficial title now. But he is one of the five or six best ever at his position, and when he wins that ring in a few weeks he will have gotten one enormous monkey off his back: He'll stop being compared unfavorably to his own potential.

I don't know what it is about me, but whenever some kind of thuggish behavior is displayed in a sporting event, people always ask me what I think about it. Last week it was, "What do you think about what happened in that Cubs-Dodgers game?"

Well, here's what I think: I think if I were a ballplayer and I saw someone in the stands attack one of my teammates, I'd jump right in and help him. So there you are. Now, you say, is that any kind of proper attitude? What would happen to sports if players were allowed to get away with fighting with fans? To which I reply, you're absolutely right, and if you attack my teammate the stands aren't going to hide you. (And remember, I said if I were a ballplayer.)

I think that's the attitude the 19 Dodgers took when they ran off the bench at Wrigley Field; I think they knew they were going to be heavily fined and probably suspended and they did it anyway, and I commend them for it. I have no objection to their being punished; I only wish Frank Robinson and Major League Baseball had the power to fine fans as well as players. MLB has no such power, of course, but it's doubtful it will pursue prosecution of the guilty fans as far as it should because, after all, ballplayers are rich and spoiled and have a bad attitude, and coming down hard on the working stiffs in the stands is terrible P.R.

But I wish the jerks who got tanked on beer and threw punches at those players would spend a night in the drunk tank As anyone who attends professional sports regularly can tell you, there is a real epidemic of thuggishness going on in the seats, one that's fueled by the constant resentment of the athletes on talk shows. Abuse at the park and on the court in terms of foul language, spilled beer, tossed garbage, etc., is reaching critical mass and isn't doing anybody any good -- least of all fans who might be inclined to take their families. Believe me, Commissioner Selig, there are a great many of us out there who would not consider it bad P.R. if you came down hard on the thugs.