There is a cure for sexism in academe. All you need are a sock and passing knowledge of French gender theory. 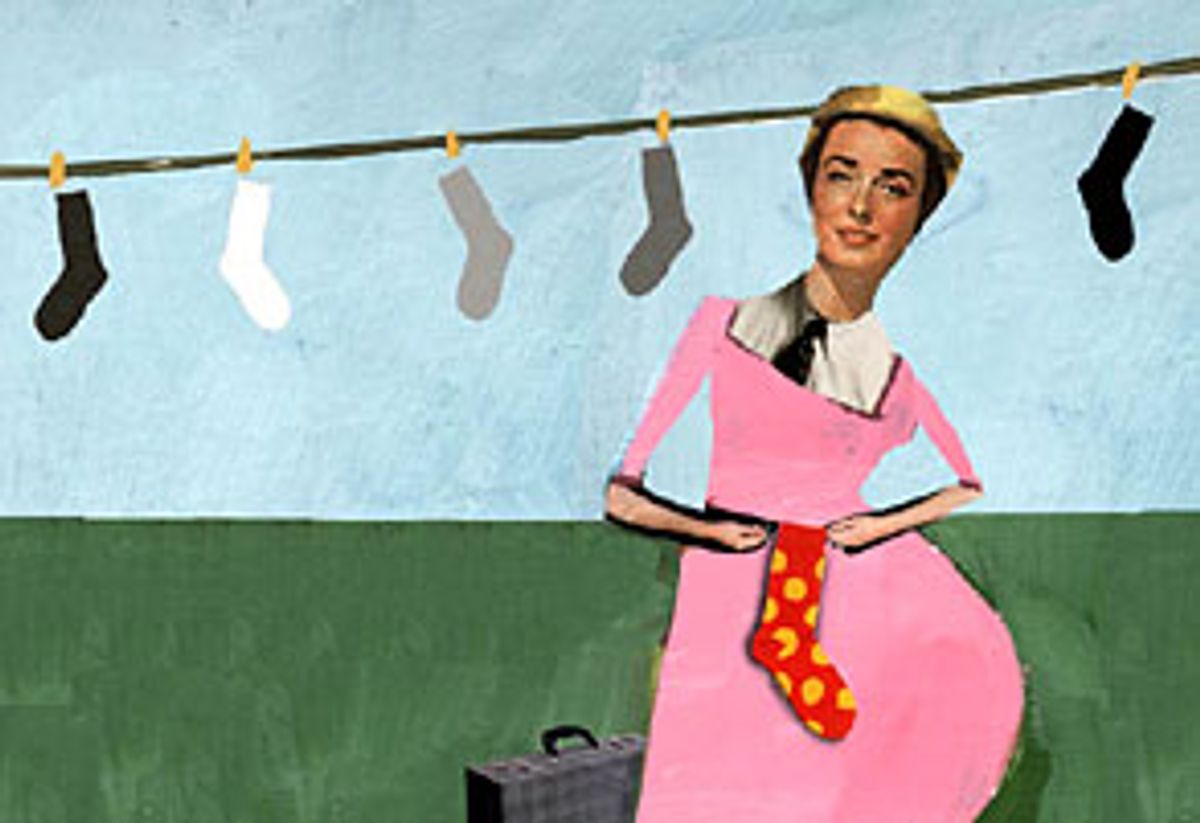 I am sitting with two friends in a crowded cafe on a cold winter afternoon. We are all three academics. We are all three feminists. We are all three mothers. And we are all three laughing uproariously. Heads begin to turn. The other diners, mostly professors from the nearby university, do not see what could possibly be so amusing. If only they knew that the source of our mirth is so appropriately academic.

We have been discussing the rather dense theories of gender that have come out of France in the past couple of decades. (In the rarefied world of academe, examining theoretical models often passes for companionable dinner conversation.) My friend Genie is sputtering the phrase "detachable phallus" through bursts of laughter while Emily is repeating the seemingly incomprehensible phrase "It must be a dress sock" and emphasizing her pronouncement's truth by jabbing the air with her finger.

The three of us have just had a dramatic theoretical and personal breakthrough. We have long known that to be a woman in the university is to face a brick ceiling, a ceiling lowered by the advent of children. But we have just figured out a theoretical intervention that might just chip away at that ceiling. And the discovery has brought us to the point of hilarity and perhaps, ironically, hysteria.

We feel frustrated that, as women in academe, our chances of getting tenure are about 1/50th of a man's. But what frustrates us even more, what pushes our laughter to the edge of hysteria, is that for many years we avoided those institutional barriers by being "one of the boys." There was a time when our intelligence, coupled with our short hair and sensible shoes, was interpreted by the white men who rule our futures as making us just like everyone else, which is to say, like Them.

These ruling professors award privilege to young men who look and act and think like Them (and thereby ensure survival of the breed). The men who are the most like them are mostly white, mostly straight and mostly upper-middle class. But occasionally, if class and race signals are in place, they will favor certain young women.

Like the three of us -- until we got pregnant and were betrayed by our female bodies.

Faced with our protruding abdomens, the men in charge had to admit that we were, in fact, women. And in that moment of being visibly female, we lost our invaluable status as protigis. You see, in the Ivory Tower, as in the Real World, most jobs are awarded not just on merit, but on network. Mr. Big calls up Mr. Bigger and says, "I've got a student here. She's applying for the job and you really need to take a look at her. She's brilliant, serious, has lots of publications, etc."

But when you're pregnant you are no longer serious; you are a woman, and worse, a mother. And everyone knows that mothers cannot be relied upon to be serious about work.

That's why at a recent job interview the hiring committee asked me several illegal questions about my children and my priorities. That's why I was told by other women to disguise or lie about the fact that I'd taken some time off to be with my children. That's why the female professors I know go to ridiculous lengths to hide their pregnancies.

One woman I know hid both her pregnancies until the eighth month by wearing loose clothes and then conspicuously displaying doughnuts in her office to explain her weight gain. Another woman couldn't face her advisors with the horrible news that she was having a baby. She waited as long as possible and then sent them an e-mail. More than one female professor has planned pregnancy around summer break in order to minimize time off and limit the number of people who know about the baby.

But now my friends and I had come up with a solution. The problem is that the men in charge of our lives are not up on many of the most important theories of gender. These theories argue that it is not the penis that is the site of social power, but the phallus, the metaphorical embodiment of masculine privilege. Phalluses are detachable; penises, for the most part, are not.

Unfortuately, the men who rule in our professional domain cling to the Freudian model of the literal penis as the static locus of power. They can't imagine passing power onto someone who does not have "the goods." My friends and I, adherents to the phallus theory, don't actually envy the penises of these men. It's their phalluses we want. We want all of the power and privilege of being white men in academia without actually being them.

And so we have just developed sockiology. According to sockiological theory, the only way to accrue a phallus and obtain male privilege in a penis-focused society is to signify a penis. In other words, if we shove a sock in our pants, the men in charge are far more likely to consider us one of them. Even mothers, even those of us who insist on making our bodies visibly female, might be allowed to be "one of the boys" if we act in strategic and sockiological ways. With the right equipment, a sockiologist who is a mother might get support, advice, encouragement and a tenured job.

That's why tomorrow we're all going to wear an extra sock to work. We simply must decide whether the sock should be dress or sports, black or white, subtle or obvious. Once we work out this last kink in sockiology, power (preferably in the form of tenure) will be ours.

And then, having achieved our goal, will we be prepared to remove the sock from our underwear? Perhaps. Or maybe we will be so attached, so deeply sockological by then, that detachment will be impossible.