But does he wear boxers or briefs? 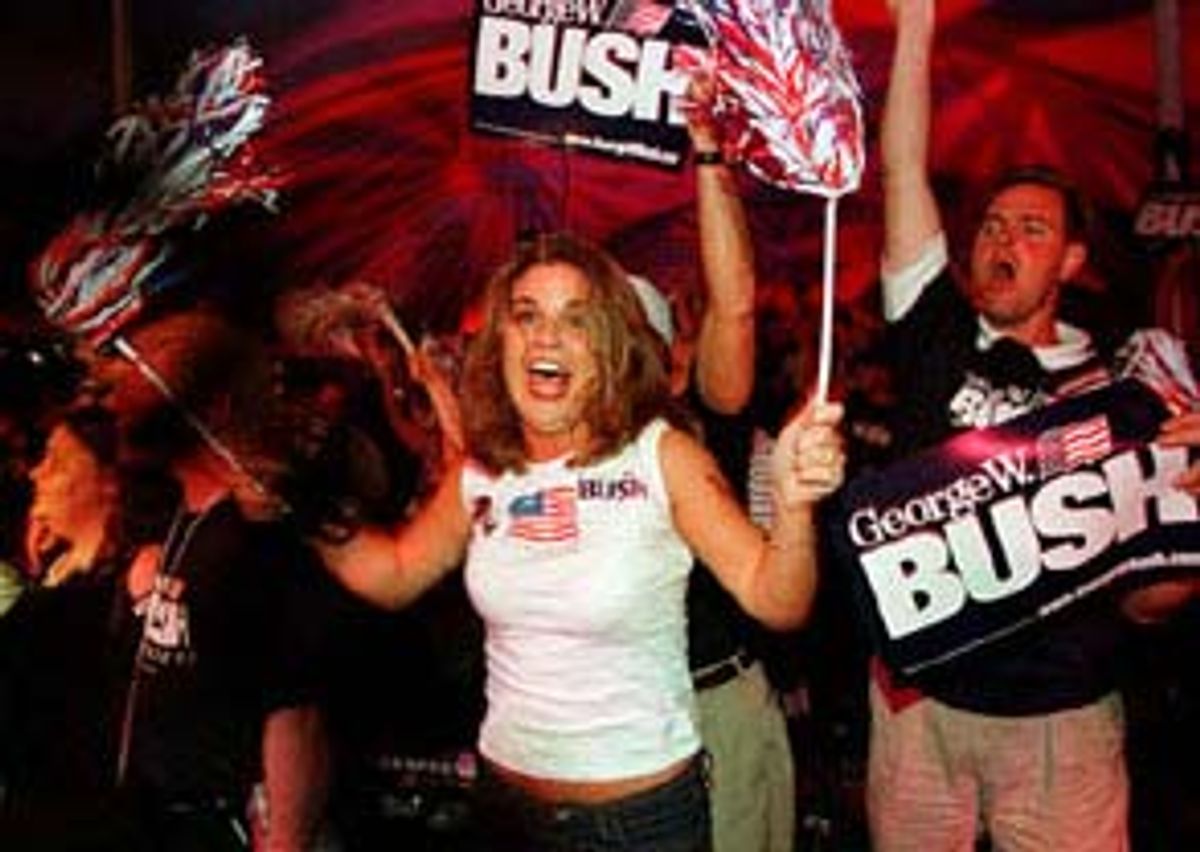 In 1992, Bill Clinton rode to the presidency on a promise to revive a failed economy and bring change to Washington after 12 years of a GOP-controlled White House. The Arkansas governor masterfully cast himself as a "New Democrat," more moderate than past Democratic nominees and presidents. To polish this image of newness, Clinton, like John F. Kennedy 30 years before him, ran as the first president of a young generation of leaders. He even appeared on "Donahue" and "Oprah," and fought a political donnybrook on MTV on the issue of boxers or briefs.

The themes of newness and change, central to the Clinton campaign strategy, were reinforced by Clinton's choice of a running mate. Like Clinton, Gore was a young, centrist, Southern Democrat. But now it is George W. Bush, the first boomer presidential nominee from the Republican Party, who is using a Clintonian strategy to try to transform his party's image and recapture the White House after eight years in exile.

Oh, sure, Gore is doing his share of youth outreach as well. Daughter Karenna is playing a prominent role in the campaign, basking in that portion of the limelight that Tipper Gore seems to shy away from. And in February, Gore proudly touted the all-important endorsement of hip-hop artist Wyclef Jean.

Neither candidate will win subtlety points for efforts to play the youth card. Bush unabashedly promotes the fact that he represents a new generation of leadership for the GOP. "I'm a strong candidate because I come from the baby boomer generation," he said on a recent appearance on the "NewsHour." He continued that theme when he revealed his Social Security plan in California. "When I am elected, this generation and this president will solve Social Security."

Bush spokeswoman Karen Hughes said the stark generational difference between Bush and his GOP predecessors -- namely Bob Dole and Bush's own father -- has helped revamp the image of the Republican Party, which was suffering from being perceived as the party of aging, vituperative, white men. Bush has consciously softened his rhetoric on the stump, peddling what he calls "compassionate conservatism," and has touted his success at attracting Latino voters during his two runs for governor. It is all part of making Bush into a different kind of Republican, and the youth card plays into that image, Hughes said.

"Governor Bush doesn't usually pander to a specific group, but his message is resonating with people that want a different kind of politics. I think young voters particularly are turned off by the partisanship and bickering that goes on in Washington. They like that Governor Bush has been able to work with Democrats. It's the new style. The politics of the past is to demagogue issues and call new proposals risky and fight to maintain the status quo. It's trite. Governor Bush represents something different."

While Bush's advisors say there has been no conscious decision on their part to appeal directly to young voters, it is obvious that they have tried to conjure up a transformative sense of youth and rejuvenation around the 53-year-old Bush.

"Governor Bush is the first Republican standard bearer from the baby-boom generation," said Hughes. "It's pretty hard to separate the individual from his generation."

Hughes points to two recent Bush policy speeches -- one on Social Security, the other on nuclear arms reduction, which she says help differentiate Bush from Gore, and which seem to be resonating with the Gen X set. Bush's Social Security pitch, unveiled in California last month, would allow baby boomers and Gen Xers a chance to invest some of their Social Security funds in the stock market.

"It looks like Gore is looking for the older voters and Bush is looking for younger ones," said Richard Thau, president of the Washington-based nonprofit Third Millennium, a group focused on issues that effect Xers. The group has endorsed partial privatization of Social Security.

Even groups opposed to the Bush plan concede that it may play well among younger voters. "We conducted a poll which found that young people are more inclined to support private accounts," said Hans Riemer, director of 2030 Action, a nonprofit focused on keeping Social Security from privatizing. "This is all very well-done and well-crafted by Bush. The strategy here is to paint Al Gore as a vicious partisan who will pander and play to fear. And in the process, he's trying to gloss over his own plan."

If Reimer is right, Gore's team played right into Bush's hand after the governor unveiled his detail-free plan. The vice president used the word "risky" so many times to describe the plan that the New York Times suggested in an editorial that someone "send the vice president a thesaurus." Bush is "leading people down a path here that could end up in a complete privatization of Social Security," said Gore campaign spokeswoman Kathleen Begala. "This is a risky, risky plan that is going to put workers at risk, and eliminate the current guaranteed Social Security benefit."

The Bush campaign seemed to welcome the attack, accusing Gore of "demagoguing" the issue, and refocusing the discussion on political leadership. "I think there is a growing risk for the vice president that people don't hear his message, just that he attacked," said Bush spokesman Ari Fleisher. "Meanwhile, from Governor Bush, they're hearing positive, substantive proposals, even in areas where Republicans have dared not tread."

Though his proposals on Social Security and most other issues have consistently been woefully short on detail, Bush is making rapid-fire policy pronouncements which, taken together, position him as a candidate of change. These policy statements are the fruit of seeds planted throughout the primary campaign. Back in February, even as Bush was in danger of being sunk by the John McCain tidal wave, his advisors were hitting the news-show circuit to talk about Bush the younger.

On the night of Bush's South Carolina primary victory, Hughes boasted to Fox News, "We won in every age group, once again attracting a lot of young voters."

Two days later, Fleisher hit those same buttons on PBS's "News Hour." "If you look at the number of young people, first-time voters, who came out, they are drawn to his candidacy," Fleisher said. "He well over-performed the younger voter vote compared to the rest of the demographics. So he's going to continue to unify Republicans, reach out across the center."

Certainly, capturing young voters will not guarantee electoral victory for any candidate come November. In the 1996 presidential general election, 18- to 29-year-olds represented 33 percent of the voting-age population but accounted for only 24 percent of voters, according to U.S. Census Bureau statistics. And polling consistently shows that education and the environment tend to be more important to these voters than Social Security. Republican strategists are betting on that fact changing.

"I think there's one thing that's motivating young people and that's their future," said Chris Paulitz, spokesman for the Republican National Committee. "Over any other issue in this election, their personal financial future is a huge issue. If there's anything that will get young people out to vote it will be that."

In positioning himself as a New Republican, Bush is not only following in the footsteps of Democrats like Clinton and Kennedy, but in those of America's oldest president, Ronald Reagan.

Veteran Washington observer Lou Cannon notes that what candidate Reagan did so well, notably against Walter Mondale, was "casting his opponent as a candidate of the past. Clinton did the same thing to [President] Bush in '92," says Cannon, author of "President Reagan, The Role of a Lifetime."