"The Chief: The Life of William Randolph Hearst" by David Nasaw

A mammoth new biography of the first media mogul, a power-hungry millionaire who horse-traded editorial policy and didn't care who knew. 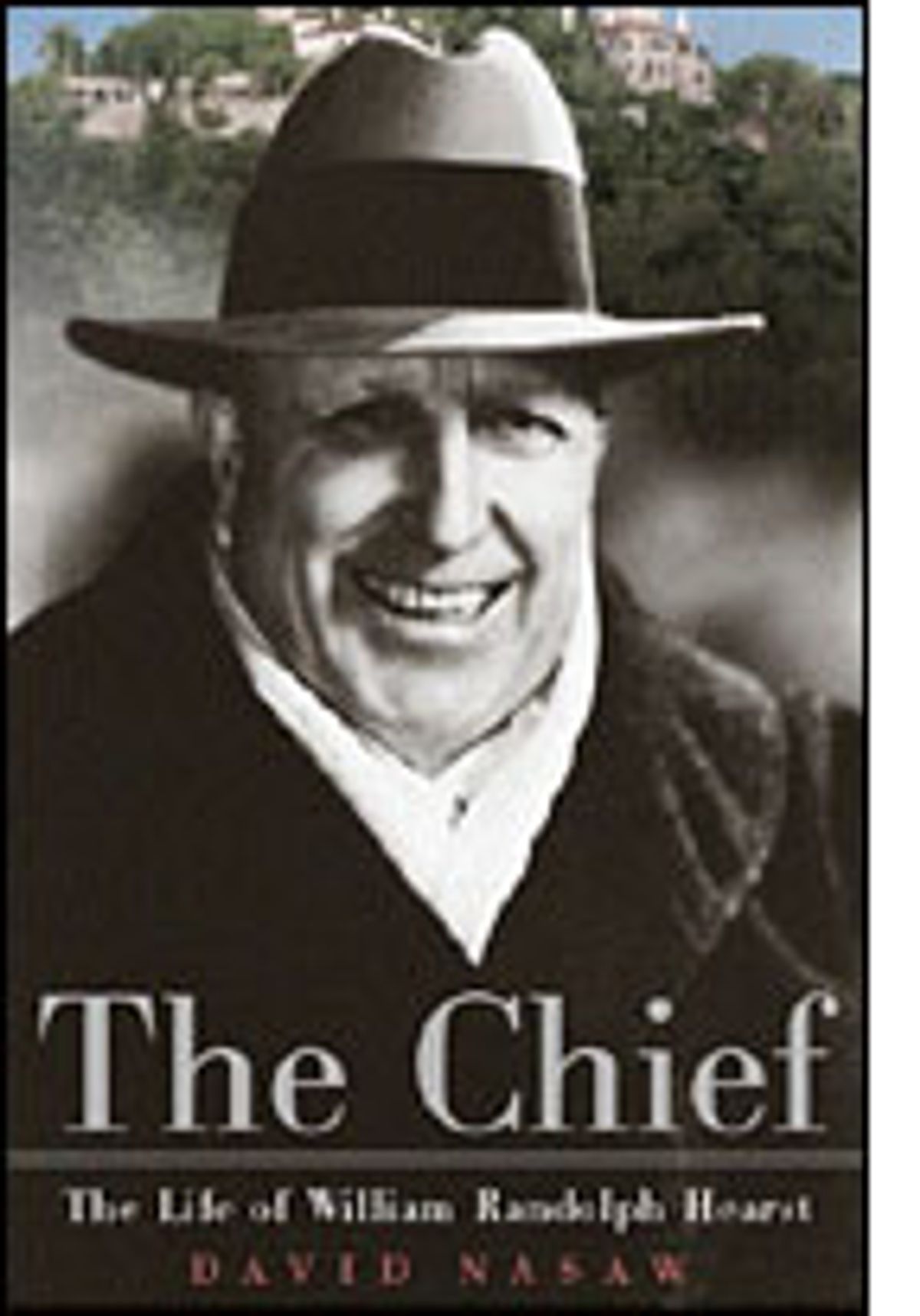 In the 1880s, William Randolph Hearst began to build a network for propagating his own opinions that would eventually include newsreels, wire services, radio stations, newspapers in every major American city, magazines like Cosmopolitan and a Hollywood studio. It was the first multimedia empire, and it was visibly ruled by a single man. Hearst promoted or opposed wars, tried to make or ruin presidents and ordered his magazines to buy stories that could be turned into movies for his mistress to star in and his critics to endorse. Autocracy built and wrecked his empire. "The next generation of publishers and media moguls," David Nasaw writes in "The Chief," his new Hearst biography, "would learn from Hearst's negative example to keep their politics out of their publications, so as not to offend potential readers, advertisers, or investors." In that sense, Hearst was quaint.

Nasaw's book draws from thousands of recently uncovered letters, interviews and private papers; it tries to avoid anecdotal information and rest on provable facts. The result is a solid, workmanlike chronicle, less colorful than the last full biography of Hearst (W.A. Swanberg's "Citizen Hearst," published in 1961) but not that much different in broad outline. Hearst is pretty well mapped out. The man was a blustering American extrovert with a paradoxically high, sensitive voice and welkin-blue eyes. He could be scornful of high society as well as immensely social, devoted to fine European art as well as chorus girls, smart about the world as well as ignorant of himself.

Nasaw's most interesting thumbnail of the man, to me, is almost a throwaway. After winning a seat in Congress at the age of 39,


he held a huge fireworks display in Madison Square, as he had done so often before. This time, something went wrong ... The New York Times reported the next morning, "a terrific explosion of fireworks occurred, transforming in an instant the entire east side of the park into a scene of death and carnage which a battlefield could scarcely have surpassed in its horror ..."

Months later, Hearst and his entourage sailed for Europe on the Kaiser Wilhelm II. At the dock, "A process server was waiting for them -- ever since the fireworks disaster in November, Hearst had been followed by them -- but Carvalho [an editor] got rid of him."

Swanberg tells that same story in denser, snappier detail; Nasaw just summarizes, but he relates the events to Hearst's unreflectiveness and his vanity. I just wish Nasaw did this sort of thing more often. He sums up Hearst's life and personality in a few well-argued pages near the end, but the biography overall could use a stronger narrative frame, with more summing-up moments along the way.

The bulk of the new information fattens Nasaw's sections on Hitler, FDR and the 1937 crash of the Hearst empire. The Chief, as he was known, comes off as a boyish millionaire with a taste for overspending whose credit dried up during the Depression partly because investors couldn't stand his politics. Hearst was always a populist: For the first three decades of his career, he threw his newspapers behind the most important American labor reforms -- he led the trust-busting movement and skewered corporate control of Congress. (He was friends with George Bernard Shaw, too.)

But in the '30s, he veered to the right, ordering his papers and newsreels to go easy on Hitler and resist Roosevelt's New Deal. These positions ruined circulation, but he stuck by them because he hated any whiff of "foreign entanglements" or of communism. By 1940 he had rebounded by starting a patriotic Red scare that would culminate in the rise of Joe McCarthy. Hearst became an archenemy of the Left, yet he continued to consider himself a progressive until his death, in 1951. Nasaw is a historian, and he's especially good at tracing the vagaries and shifting currents of Hearst's demagogic liberalism.

But the Chief's lasting legacy is the concept of the media empire: He showed what could be done with that power. The Hearst Corp. these days is richer than ever, with assets in network TV, cable channels, magazines, newspapers and the Web. But can you name the chairman? At least while Hearst was alive everyone knew he dictated and horse-traded editorial policy. But when Tim White, the publisher of Hearst's San Francisco Examiner, admitted last month to promising easy editorial treatment to San Francisco Mayor Willie Brown in return for support on a deal to buy the San Francisco Chronicle -- in what looks like a bid by the Hearst Corp. to monopolize San Francisco's daily market -- everyone acted surprised. White is on punitive, indefinite leave. This is pure, blinding, sulfurous hypocrisy. Hearst pulled that shit all the time.