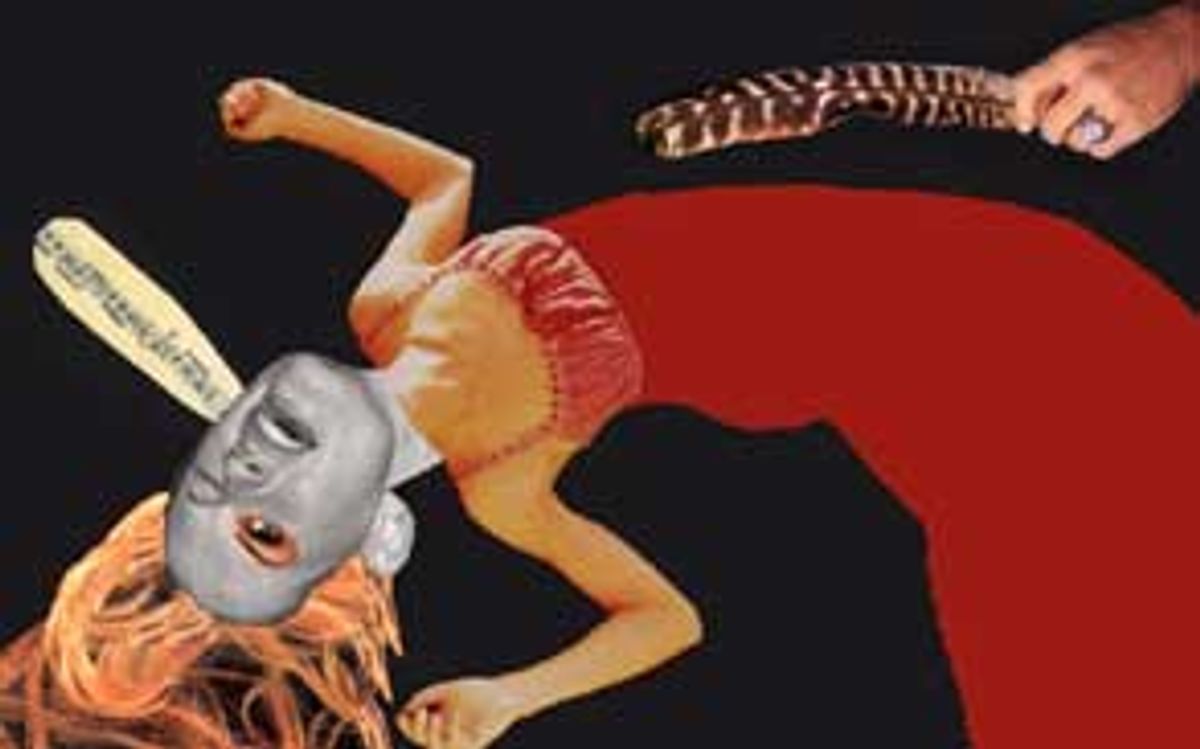 "Of course I've embellished," one woman told me about faking orgasm. "Not screaming and yelping and making a mountain out of a molehill. It's a question of intensity and attention. Sometimes I'm all there and sometimes I'm not. When I'm not, I work it a little, partly for me and partly for him. Mechanics aside, it strikes me as supremely arrogant and mean to have your mind in the next county while your body is otherwise engaged right here. That's a matter of respect and courtesy, and sometimes a little embellishment can be a way of priming the motor."

Call it what you will -- an embellishment in the service of priming the motor here, an over-the-top working it there -- it still begs the question: Is it ethical to fake an orgasm?

"On the one hand, faking an orgasm is a kind of lie to your partner," says Janet R. Jakobsen, director of the Barnard Center for Research on Women at Barnard College. "But then we have to think of what kind of lie, and it probably varies from situation to situation. Is it the small, make-things-go-smoother type ('Yes, your haircut looks good'; 'Yes, you played well at the company baseball game') or something more serious?"

A female colleague considers faking orgasm to fall squarely in the "white lie" category -- "those times when you want to be careful, when to tell the truth is to hit somebody over the head with a railroad tie."

But some psychologists who specialize in sexuality warn that there's an inherent danger in lying of any sort in sexual relationships. "The problem with dishonesty is that when it succeeds in one area, then there's temptation to use it in another area," says Bernie Zilbergeld, a psychologist and author of "The New Male Sexuality."

What's more, on a practical level, faking can have long-term implications in the sack. Lonnie Barbach, a psychologist and author of numerous books on female sexuality, including "For Yourself: The Fulfillment of Female Sexuality," says: "If you're faking it, you're teaching your partner exactly the wrong thing to do. You're not going to lead yourself to a better sexual relationship because your partner is just not getting the information." As a result, instead of discovering how to really please a sexual partner, men may go away satiated and smug in their belief that no woman of theirs has ever stooped to faking it.

It may be that most men are either oblivious to any faking going on or in deep denial that they're not able to bring a partner to orgasm. But it could just be that their female partners are truly gifted fakers. Without exception, the men I talked to said that their sexual partners rarely if ever embellished so much as a tad during sex.

"I always worked hard at my craft," one guy said. "If they didn't have an orgasm -- which they sometimes didn't -- they didn't act out the death scene from 'Scarface' to make me think they were having a good time. They had pleasure and that was what we were there for."

Other guys admitted that sometimes a partner may not reach orgasm -- which is fine as long as the guys have given it their best shot. "It's better for both of us if she's really having the orgasm," one guy told me. "But personally, I'd rather she not fake the scream and such. If it happens, great. If it doesn't, don't pretend for my sake. It doesn't make me feel like any less of a man to not get a woman to orgasm, particularly if I'm doing everything possible (listening to what she wants, responding, being in the moment, asking questions, getting out the scuba gear and ostrich feathers) to make it happen."

In the spirit of equal treatment on the faking front, a quick aside here: It is indeed possible for men as well as women to fake orgasm. What men can't fake is ejaculation.

"There are men who can ejaculate without having a pleasurable sensation associated with it," says Dr. Richard F. Spark, author of "Sexual Health for Men: The Complete Guide." Spark, who teaches at Harvard Medical School, adds that in most healthy sexual responses ejaculation and orgasm "are really so linked in time that we don't tend to think twice about it."

So while men do fake orgasm, more typically it's the woman who's doing the faking and the guy who's left in the dark. And if the woman decides to wait until late in the relationship to tell her partner that all those countless orgasms he tallied up were mere figments, it can have disastrous consequences.

"There's something about misleading somebody along the way that can develop mistrust," says Barbach, "that can lead a partner to wonder, 'Can I trust them on anything?'"

In spite of the mistrust, however, Barbach is quick to point out, there are times when it might be perfectly honorable to fake an orgasm. "If you know that you just tend to be nervous in the beginning of a relationship and know you're not going to have an orgasm, it's not misleading your partner. It's just that you need time to relax, and you don't want to make it a bigger issue than is warranted."

So embellishing for the "right" reason, whether out of courtesy or in anticipation of eventual relaxation, is copacetic. The trouble is, who's going to decide what the right reason is? Granted, it's your body and you'll sigh if you want to, but how do you know if an embellishment here and a tad over the top there are right for your partner?

The thing about ethical dilemmas is that there are rarely clear right and wrong answers. Instead, we need to operate while a healthy dose of ambiguity is mucking up the works.

"The sexual relationship doesn't have to be perfect," says Thomas Moore, author of "The Soul of Sex." Moore, a former Roman Catholic monk who now lives in New England with his wife and two children, believes that faking orgasm may fall into the category of imperfection. To Moore, it isn't the act of faking an orgasm that is the real problem. "You need to try to get to the subtlety of exactly what each person is experiencing. Then you might ultimately come to the question of the real moral issue, such as: Is it right for you to stay with this person when you know deep down there's no love there?"

Some men have found that even with a diligently executed orgasm, without a deeper love the sex alone wasn't enough. "She was 'mechanical,'" said one man. "She was a technician. She knew what it took for her to arrive at orgasm, and we had to maneuver through the entire pre-flight checklist to reach this destination. Nothing wrong with this, really; I'm willing to do what works. But she was relentlessly methodical about it -- no sense of spontaneity. She was under warranty and I was Mr. Goodwrench. It became boring and predictable very quickly, and we both moved on."

But in more than one loving relationship, women talked about how they might exaggerate some because they thought it would "make the experience more pleasurable for the other person."

Things would undoubtedly be a lot easier if couples would just talk more openly about their sexual relationships. But as we all know, it's difficult for most couples to talk about sex. For one thing, the cultural shame associated with admitting that somehow you've failed yourself and your partner is pervasive. And, on a more practical level, getting all the natural equipment required during sex primed and pumped so that everything happens right on cue, in the right place, with the right velocity and with a dash of insouciant bravado is no easy feat. Too much talk might add to the already pent-up pressure to perform and cause failure.

"If I put these things under the microscope," said one woman (referring to the act rather than the equipment), "I would only complicate the experience and throw up another inhibitor."

Indeed, Moore suggests that talking about the sex itself may not be the best tactic. He suggests that if a couple experiencing sexual difficulty could see that almost every other aspect of their life was implicated in their sexual relationship, they wouldn't have to limit their conversation to just what it's like to make love.

"They could talk about what books they're reading, how much they eat at night. How much do they work? What kind of work do they do? How do they talk about their work? Is there some pleasure there? I would want to see the sex, the lovemaking, as the final stage in the whole sexual process." Such discussions, Moore contends, can help couples rediscover that deep-down love they have for each ther.

Of course, in some cases both people may know there's a little bit of faking going on and be entirely fine with it as part of their sexual folderol. So it would be nuts to conclude that faking orgasm is always unethical, always ethical or always something in between. It would be equally crazy to bullet-list 10 points you could use to measure how your or your partner's faking registers on an ethical scale (although I'm pretty confident that if the ostrich feathers and scuba gear come out, you're doing just fine).

But in any serious, loving relationship, you do have to wonder about just how healthy, honest and real that relationship is if the partners find it impossible to tell each other the truth about their experience of sex. And I don't just mean an embellishment here or there in expressing how delighted you are during particular moments of the sexual act. I'm talking about something that goes far deeper, something in the relationship that makes you fearful that telling your partner that you didn't find sex with him or her pleasurable this time will either devastate him or her or lessen you somehow in your partner's eyes.

There's nothing inherently wrong with exaggerating or faking an orgasm. What is problematic is when you know something's wrong in your sexual relationship and you fake orgasm to cover over the problem. Pleasurable sex without a scintilla of fakery isn't a requirement for every truly deep and loving relationship. But honesty is.

Jeffrey L. Seglin is author of "The Good, the Bad, and Your Business: Choosing Right When Ethical Dilemmas Pull You Apart." He teaches at Emerson College in Boston.