It's got a recognizable name and some high-profile backers, but does Business.com have anything on Yahoo? 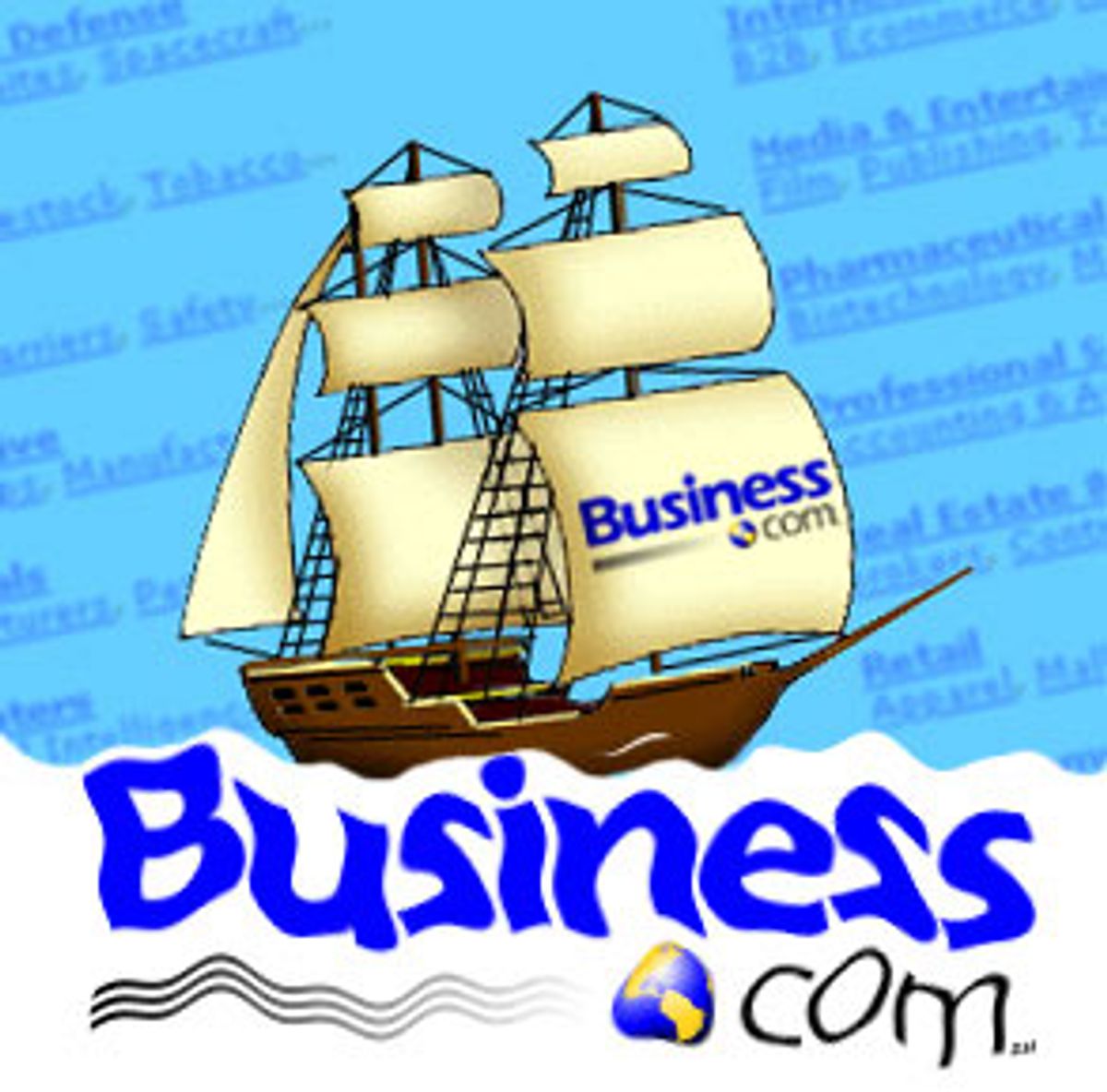 Just what does $7.5 million and a braintrust of hotshots from new and old media buy you?

So far, the answer is a no-frills Internet portal that indexes and cross-indexes the world of business into a directory that can be sliced and diced into 25,000 different combinations, plus a search engine that the site's designers say scans only Web sites devoted to commerce, e- and otherwise.

Business.com, which set the sneakered pioneers of the new economy a-chatter in November when its parent company paid a record $7.5 million for its domain name, launched the first phase of its much-anticipated Web site this week. Its creators promise that as subsequent phases of the rollout continue over the next few weeks, we'll find breaking news and house-written profiles on individual industries and companies.

To the casual observer, though, it's hard to see how Business.com, which was attractive enough to lure the Wall Street Journal's former Los Angeles bureau chief to join an Internet start-up, is any different from mainstream Internet portals like Yahoo, which also offers specialized business services categories.

Last year, Dayton and Winebaum co-founded eCompanies, an Internet business incubator and venture capital group in Santa Monica, Calif., and Business.com's parent. In November, the company announced that Winebaum's idea for a business-to-business Internet service was in development on the same day it reported the purchase of the Business.com domain name from a Houston media entrepreneur. Gumbel came on board in February as editor in chief with McGovern joining the team as president and general manager in March.

Such a lineup of heavy-hitters and a name worth more than the Bionic Man left Internet observers wondering what the offspring of such a union would be like.

Visitors to the site in the weeks before the launch were teased with the tagline "Business.com. The business revolution starts here soon." But judging from the site as it is now, is this really the revolution or, to borrow a line from the Who, is the new boss the same as the old boss?

Granted, I'm a journalist and not necessarily a member of the Business.com target audience of small-business owners or corporate buyers. Maybe what's truly innovative about the site was completely lost on me, but I was a bit disappointed by the splendorous new Web presence.

An unscientific comparison of Business.com and Yahoo's business offerings gave me pretty much the same result: A search of "Web developer" on both sites produced two similarly long and confusing lists of companies that provide such services, with no other data to help me discern why one firm might work better for me. I tried "cinema advertising" and had the same experience. I felt like I had two versions of the Yellow Pages; the two directories linked to a different set of sites, or at least ordered them differently, but neither provided me with valuable decision-making data. Who's to say which is better?

I wasn't the only one who was a bit baffled by the debut of Business.com. "It's too early to tell, but my sense is it's not going to be something people are going to flock to," confided Joe Butt, an analyst with Forrester Research. He isn't convinced the site will be able to generate sustained traffic, something crucial for Business.com since its revenue will come almost entirely from advertising.

"Does business need this kind of definitive directory?" Butt asked. "I don't know. I look at it and say no." Major companies, Butt said, probably won't need the directory and search engine functions because they should know most if not all of the suppliers in their industry already. Small businesses might find the site helpful, he said, but once they locate what they need there's little incentive for frequent return visits.

Business.com creators, however, counter that the information revolution has so altered the world of business that traditional perceptions of how it works may no longer be valid. Said Gumbel, "The Internet is changing everything -- every job, every company, every business."

Certainly, Business.com has some big shoes to break in if it's to live up to its creators' vision that the site will one day be as synonymous in the world of commerce as Lycos, Yahoo and AltaVista are in the world of consumers.

But Gumbel is enthusiastic about its chances. The directory and the search engine, he said, are designed to link businesses quickly to whatever they need, from corrugated shipping boxes to the how-tos of assessing whether to buy or lease computer equipment. The directory's listing of business Web sites will include 1 million entries by year's end and the search engine can cull information from roughly 200 million Web pages. Gumbel says that perks such as up-to-the-minute business news from 30 different sources and profiles of 10,000 publicly traded companies will add to the site's allure.

And Anya Sacharow, an analyst at Jupiter Communications, says it's too early to call this play. "Any site that makes people's lives easier has a shot at being successful," she says. "I don't think I'd be so down on it since it's in its initial stages."

True, it'll take time for the site to prove itself. But you have to wonder how a company that has blanketed the Net with press releases bemoaning the Web's merciless torrent of "information chaos" and its "literally millions of Web sites ... fighting for your attention," can justify adding one more high-priced URL to the madness.

As Butt says: "It's a great URL. It's advertising money well spent. Now it depends on what you do with it."

Isn't this what we should have been saying before the launch?

Stephen Gregory has been a journalist in Los Angeles for 11 years.