Amid defections and threats, the revolt against Pat Buchanan begins -- and threatens to destroy the house that Ross and The Body built. 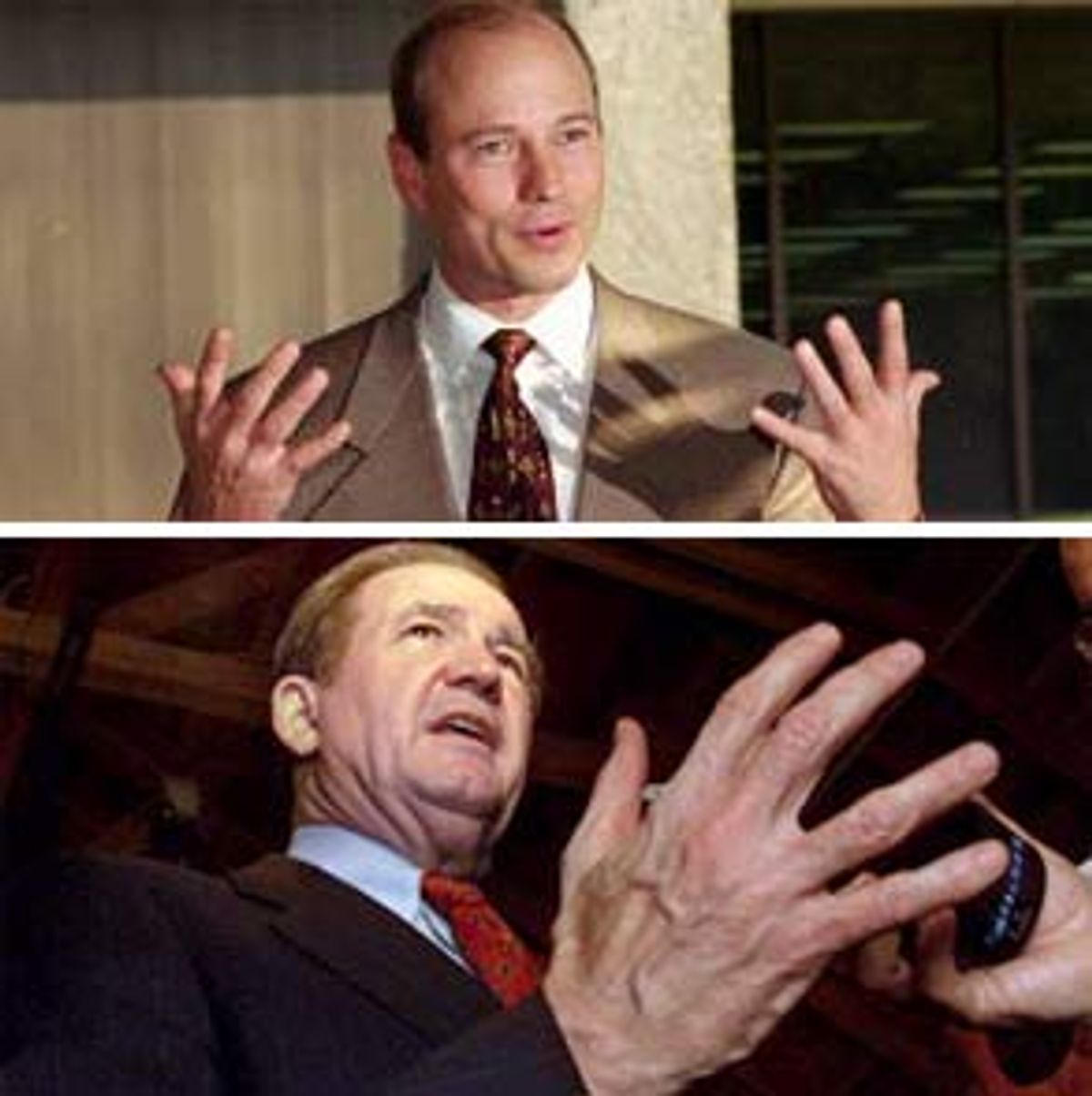 The Reform Party is perhaps best seen as a modern, political version of the fable of "The Scorpion and the Toad," complete with pitchforks, feather boas, pinup models and of course, $12.6 million in federal matching funds.

In the traditional version of the fable, a scorpion asks a frog to carry him across a stream on its back. The toad asks, "How do I know you won't sting me?" The scorpion says, "Because if I do, I will die too."

The toad agrees and they set out together, but in midstream, the scorpion stings the frog. As paralysis sets in, the toad knows the two will both sink and drown, but has just enough time to gasp, "Why?"

"It's my nature," replies the scorpion.

So it is with the Reform Party. Once upon a time, there was an idealistic political party made up of debt-reducing, social-libertarian isolationists who craved a simpler life. This disparate group, individualistic by nature, rallied first around an eccentric Texas billionaire, until a professional wrestler suddenly stole his thunder.

"How do we know you will not sting us with your social conservatism?" some party regulars asked.

"Because it will only hurt me to hurt you," the conservative said. "Plus, I have reached out to Lenora Fulani."

The party was satisfied, and allowed the conservative to ride on their backs, or walk all over them, as the case may be.

Now, with the $12 mil squarely in the conservative's sights, many of the Reform Party old-timers find themselves gasping for air, just now rethinking this Faustian bargain. While the Reform Party mud wrestling has been well-documented, what is most startling about this parable is the utter naiveti of the old guard. Now that the billionaire, Ross Perot, has forsaken another presidential run, some party leaders are turning to an unknown physicist from the Natural Law Party in a last-ditch effort to thwart the conservative, Pat Buchanan.

It is, of course, an understatement to say some in the party are now beginning to have second thoughts. "It was a mistake," says Reform Party national secretary Jim Mangia of the efforts to welcome Buchanan to the party. "All of the in-fighting and the Ventura stuff created an environment where Buchanan could come in and take over."

If his story is true, Mangia and other leaders trying to block the Buchanan nomination ought to be given some kind of medal for political ignorance. "We were welcoming him in with the promise that he wasn't going to talk about social issues," Mangia says. "What [Buchanan staffers] were saying is they had capped out, and they were looking to expand their base. That's what the whole Lenora Fulani thing was about."

Mangia refers to the unlikely alliance between the arch-conservative Buchanan and Fulani, the left-wing presidential candidate who became co-chair of Buchanan's campaign. Tensions between the strange bedfellows have escalated in recent weeks, however.

After inviting the devil into the church, so to speak, Reform Party in-fighting continue to diminish hopes the party may have had of capitalizing on the Perot tidal wave of 1992. Any message of political import has been eclipsed by the freak show that began in earnest as soon as Jesse Ventura was elected governor of Minnesota.

The ideological divide between the old Reformers and the Buchananites has long since turned personal. Last week, Delaware Reform Party chairman William Shields, a Buchanan ally, sent a memo to state party leaders calling for Mangia's political hide. "I am interested in a resolution at the convention to remove Jim Mangia from any leadership role in this party, and to physically eject him, along with any trash or dangerous biological waste that may have found its way onto the convention floor."

Mangia and his allies, who unsuccessfully tried to nudge Perot out of political retirement, were unsuccessful in their efforts to pass a resolution at the California state convention last weekend to prevent Buchanan from tapping a pro-life, social conservative as a running mate. Mangia blamed the loss on "the brown shirt, bully tactics" used by Buchanan forces.

"I've been involved in politics since I was 11 years old," Mangia said, "I've been in some battles, but this was out of control."

Buchanan spokesman Brian Doherty shrugged off the complaints, saying, "the fact of the matter is that people voting for Pat are not doing so with a gun to their head."

Mangia said it got pretty close. "As our resolution came up for a vote, the Buchanan people were in the back chanting, 'lock and load, lock and load.' I guess we're all learning as we go what they'll do and the extent to which they break rules, trash principles and destroy everything this party is supposed to stand for."

"Unfortunately, he was a Trojan horse," says Robert Roth, a spokesman for John Hagelin, who is running against Buchanan for the Reform Party nomination. "Buchanan's jingoism and racism is just scary. He said he was a changed man, but he's just the same old guy."

The Buchanan forces spun the California convention as "rolling back and routing an anti-Buchanan initiative in California," according to a Tuesday press release.

"After Buchanan's rousing speech to the delegates on Saturday, and a persuasive floor effort by Buchanan campaign aides," the statement reads, "the convention turned back the 'rule or ruin' faction, killing by voice vote an anti-Buchanan resolution."

Mangia says his side probably would have prevailed if there had been a secret ballot, "but with all that going on, sometimes you just don't think of everything."

The irony is that Mangia was himself at the center of a storm last year to remove Ventura ally Jack Gargan as national chairman of the party. The charge against Gargan was led by Pat Choate (Perot's running mate in 1996) who has now allied himself with Buchanan. Somewhere in a Midwestern governor's mansion, someone is saying "I told you so."

With Perot now officially out of the picture, Mangia and other anti-Buchanan Reformers are defaulting to Hagelin, a physicist from the Natural Law Party who has quietly been working to place his name on the ballot alongside Buchanan for the Reform Party nomination. Reform Party rules do not preclude a candidate from seeking the nomination from more than one party.

Through the party's peculiar and somewhat uncertain nominating process, any registered voter will be eligible to participate in the Reform Party primary, even if that voter is not an official party member. Results from a popular vote can be overturned if two-thirds of the delegates to the national party convention decide to throw the election out. Buchanan has been diligent in trying to stuff the party with sympathetic delegates, but it is unlikely that he will be able to get a two-thirds majority at this summer's convention in Long Beach, Calif.

Hagelin says that while Buchanan has been "very aggressive in trying to snatch delegates in various states," the possibility of Buchanan wrestling the nomination away on the convention floor if he loses the primary is a long shot. "I don't think he'll even have a majority of delegates," Hagelin said. "Even if he could overturn the primary election, it would spell the end both of the Reform Party and his campaign."

Though ballots will be sent out in less than four weeks, final details about the election are still yet to be decided. The most significant of the details yet to be resolved is whether or not people will be allowed to cast their votes online. But one thing is certain. Only two names will appear on the ballot: Pat Buchanan and John Hagelin.

Certainly more attention is being paid to who Hagelin isn't than to who he is. According to his campaign Web site, his book, "Manual for a Perfect Government," shows how, "through educational programs that develop human consciousness, and through policies and programs that effectively harness the laws of nature, it is possible to solve acute social problems and enhance governmental effectiveness."

This also seems to fit nicely with one of the central tenets of the Natural Law Party: "From the deepest perspective, our national problems have one underlying cause -- violation of natural law. Natural law is the orderly principles -- the laws of nature -- that govern the functioning of nature everywhere, from atoms to ecosystems to galaxies," the party platform states.

Yes, Mangia acknowledges, Hagelin has some selling to do. "People may think it's a bit fringe, or whatever, but I think they'll see different when they take a closer look," he says.

But Hagelin is confident he can take Buchanan in a head-to-head election matchup "as long as there is an open and fair election." Hagelin says he has some concerns about getting a fair tally in states where Buchanan forces are in control, such as Maryland, "where there may be some difficulties with the fairness of the process."

Hagelin says he, too, has seen Buchanan allies try to intimidate party members. "I have seen it up close and personal and it can be overwhelming. It's not a pretty sight. In Wisconsin, Buchanan sat out in his limousine while his operatives got in a shouting match demanding the resignation of the chair. These were people who hadn't even registered as Reform Party. This is politics worse than usual."

Hagelin admits his candidacy has been seen as a last-ditch, lesser-of-two-evils scenario among party members focused on stopping Buchanan. But he says his campaign may have turned a corner in California last weekend. "The leadership in the party who have been hesitant to jump on my bandwagon, I think they were wondering if I commanded enough of an audience. But in California, I dominated the [convention]. That was an eye-opener. I think the California leadership was willing to roll over, but I believe my presentation gave them a raison d'itat to stick it out and fight."