Will the NRA's new Big Apple eatery ever make it off the ground? 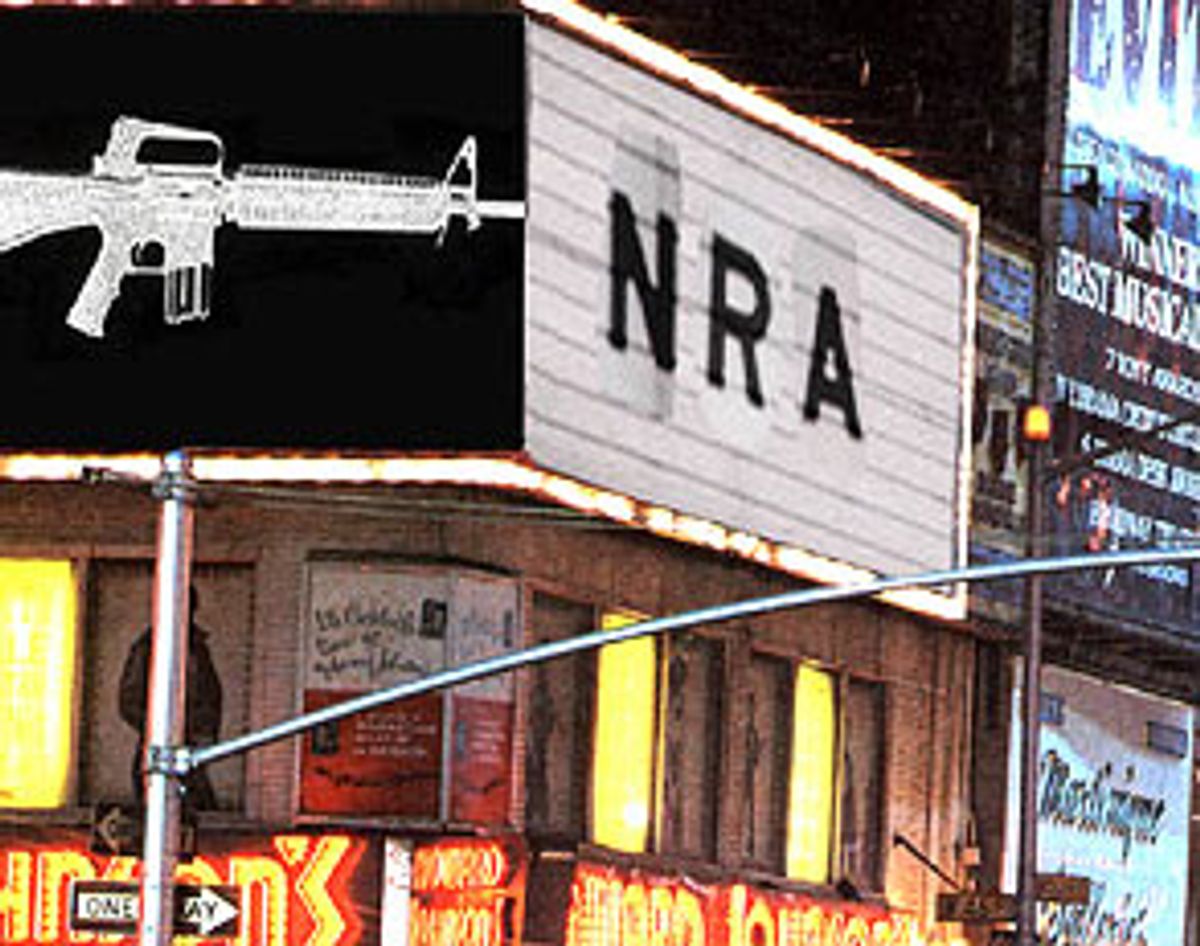 On Monday, New York's City Council passed a ceremonial measure officially declaring the NRA unwelcome. Though the measure has no force of law, it encourages other local agencies to reconsider the critical permits and licenses necessary to do business in New York.

Meanwhile, the NRA has identified no site in Times Square's extensive web of parcels; it cites no manager for its store or restaurant; it declines to specify precisely what it will sell.

According to executive vice president Wayne LaPierre, NRASports Blast will fuse a gear-and-hunting store, a stretch of virtual shooting games and a restaurant serving wild game and mineral water. Nevertheless, it's unclear how many people will actually staff the store, how the NRA will extract scarce labor and who will manage day-to-day stocking of shelves and washing of basins. Spokesperson Kelly Whitley says the group plans to "spend about $6 million on the project" -- a financial gamble in a district where annual ground-floor rents (notwithstanding construction costs) can hit $7 million.

Alan Victor, a broker for available space at 49th and Broadway, says he has never heard from the group. He also doubts landlords would welcome the attendant controversy the NRA would bring -- especially when unrefined but stolid businesses like Toys "R" Us are angling for the same space.

On 42nd Street itself, New York State still controls many parcels, and is unlikely to contract with a lightning rod like the NRA. 1530 Broadway -- a strip with an abandoned movie theater, a cut-price electronics dealer and a gift shop -- could stand a gaudy rebirth. But owner Charles Moss told me "he has never had a conversation" with the group, and claims he has "no interest" in doing so. Rumors have the NRA prowling West 57th Street, a 10-minute walk away, near the Hard Rock Cafe and the Warner Brothers Studio Store. (Planet Hollywood's Aimee Geller says she doesn't know whether the company is turning over its 57th Street space.) The NRA says it's looking at six sites.

Nevertheless, despite high rents and verbal opposition, the NRA may have picked a perfect time to move into Times Square. Theme restaurants are thriving in Manhattan's once-seedy nexus. ESPN Zone sits a few blocks from Mars 2112, where diners ride a simulated space pod. The Worldwide Wrestling Foundation bought its space on 43rd Street for $23.6 million this month, expecting to net $4 to $6 million in annual profits. Chevy's Mexican Grill and the Asian-pastiche Ruby Foo's have opened in the past year; B.B. King's blues club waits in queue. Planet Hollywood International is closing its All-Star Cafi in order to make Times Square its flagship site. In such heady times, say experts and competitors, the NRA could certainly get in on the fun.

Still, any restaurant under the NRA rubric "would have to be extremely well-researched," says Cornell Hotel Management professor Alex Susskind. Indeed, if concepts made restaurants profitable, Planet Hollywood International shares might be worth more than a Starbucks grande latte. And while the NRA is certainly adept at theatrics, it knows little about inventory. "We have a little store [at our Fairfax, Va., headquarters] where we sell T-shirts, hats and mugs," Whitley says.

Retail expert Paul DeMeyer of Destination Development & Consulting suggests the NRA could thrill its 3.6 million members with a "brand store." In Guam, DeMeyer notes, Japanese tourists who are not generally allowed to own guns flock to shooting galleries. A cross-section of repressed foreigners and trigger-happy Yanks could keep the NRASports Blast hopping, guesses DeMeyer. He would, though, scrap the wild-game menu. "You don't go to a zoo and say 'I'll eat that lamb,'" he observes.

Meanwhile, New York natives continue to bare their teeth at the NRA. Upon hearing about NRASports Blast, New York's liberal establishment clamped down immediately. Two weeks ago, Brooklyn Democratic Senator Charles Schumer stood in the rain atop a subway grate, calling on landlords to refute the NRA and New Yorkers to boycott any NRA establishment. "Make this the worst business decision since the Edsel," he growled.

But can Schumer and New York's City Council stop the NRA?

They can certainly stall things. The Council vote could hobble the opening by postponing it until the next recession. Under the city's Byzantine zoning law, the 50 citizens who comprise Community Board 5 can block liquor and arcade licenses for vendors who offend their aesthetics. They figure to close ranks here behind the Council. It's hard to fathom an NRA cafe without alcohol.

NRA spokesman Bill Powers maintains that negotiations continue. "We've been meeting with people," he says. As with many campaigns, the NRA has proven it can sustain its plans as long as those plans frustrate its enemies. Think of NRASports Blast as a vanity project with a bullet.

Alec Appelbaum writes and teaches about how people can use urban design to make cities healthier as the climate changes. He teaches at Pratt Institute and has developed a youth curriculum, AllBeforeUs, that uses climate change as a frame for teaching civic engagement. His essays have appeared in the New York Times, City Limits and many other publications.