Truffles and other sins

Why must they be tubers? 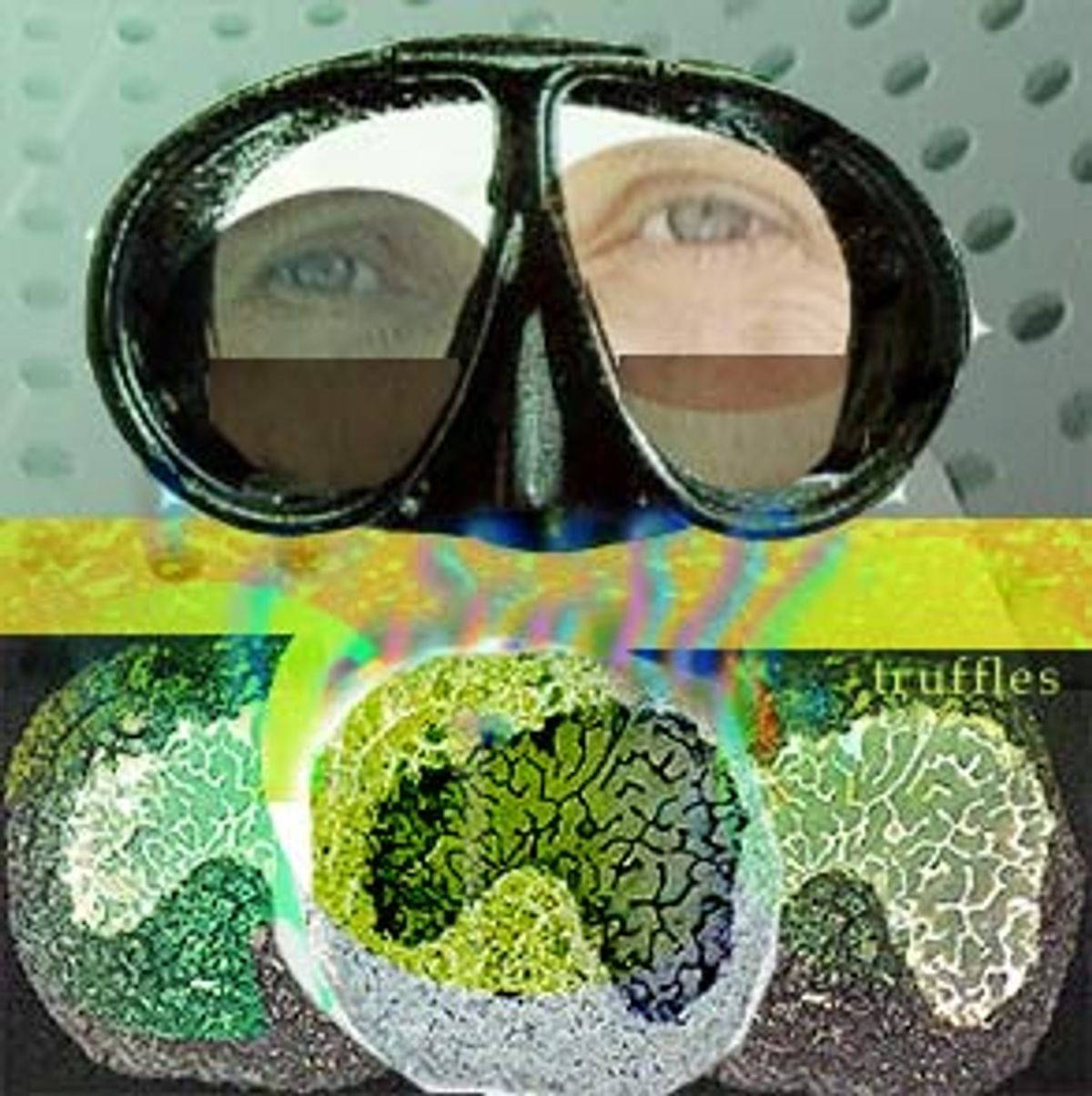 Don't you hate truffles? Oh, no, wait -- I forgot. You probably like them. Everyone does except me.

I'm not talking about candy truffles. I'm talking about the expensive tuberous kind, both black and white. The kind that grow underground and that dogs and pigs are trained to sniff out. (Pigs like truffles: big recommendation.) The kind that flavor pâté and get shaved onto risotto and stuffed under chicken skin and sliced into salads, and that enthusiasts tend to describe in the overwrought, give-me-a-break language that's normally used only to describe desserts with names like Chocolate Death. Heady ... intoxicating ... divinely musky -- who knew there were so many synonyms for stinky?

Push people a tiny bit, though, and chinks appear in the armor. "The ones that smell like feet are the best," says one of my friends. "I like them, but I'd rather have the money," says another. From a third: "I had white truffle risotto before knowing what a truffle looked like, and I was in heaven. The only thing that makes me feel as if I'm being duped into buying some sort of fragrant petrified sponge is when I realize that I have no idea if the truffle I get from the gourmet shop is really any good -- or at least better than the other ones. Are the harder spots bad, or are the softer spots bad? And who can afford to throw any of it away?"

I can. When I bought my first truffle -- a 2-ounce black one, from a very respectable mail-order place -- everyone in my family gathered around reverently while I opened it. As that dank, poisonous scent seeped out of the box we all reeled back, screaming. "Maybe that's just how it smells," I said with a briskness belying my inner conviction that I'd just spent $150 on some mildewed manure. "I bet when I actually make something with it, we'll love it." So I put together a batch of scalloped potatoes with truffles. When I took them out of the oven, we once again all reeled back, screaming. I scraped the whole mess into the garbage without even letting it cool.

I waited a year or two and then ordered a second truffle -- a white one this time. (By the way, in Italy, it's illegal to carry white truffles on public transportation.) This time I took a hasty sniff and left the box on the counter while I regained my courage elsewhere. I came into the kitchen a few hours later to find that my husband and kids had smothered the box in several plastic bags and stuffed it into my snap-top cake carrier. We never went near it again, and gradually the scent faded away. The truffle was dead. We had killed it.

Since truffles look so fungoid, why can't they taste more like mushrooms? Why do they have to be tubers? And why am I working so hard to convince myself that they're worthless? Hating them makes me feel left out and stupid. I'm generally good about forcing myself to learn to love foods I hate if it's clear that they're not going to go away. But truffles defeat me. Maybe I lack the truffle-appreciation gene.

"If you can't say something nice, don't say anything at all," a mother might say at this point. Not mine, since she knows it's a principle I violate every time I draw breath to speak. However, I can say plenty of nice things about dried porcini, which truffles should have been. Dried porcini have an intensity of flavor that can stand up to anything. Because they start out so tough and leathery (you could probably back your car over them and they'd still be OK), you can cook them forever. They blossom instead of withering. They're available in the produce departments of most supermarkets. And they're so much cheaper than truffles that you're really saving money every time you use them.

Portobello mushrooms, once as rare as Kobe beef, have also passed into the vernacular, and now appear on the menu at places like Ruby Tuesday. But just because regular people eat them doesn't mean we should abandon them. Portobellos are the only widely available "exotic" mushrooms that, when cooked, actually taste noticeably different from white button mushrooms. I used to buy cremini mushrooms, until a produce salesman told me, "I hate to say this, but those aren't any better than regular mushrooms. They're just more expensive." I had always felt this was true, but I'd been too much of a food lemming not to keep buying them. After all, cremini mushrooms are darker and more expensive than white button mushrooms -- how could they not taste better? But portobellos really are distinctive, and they add a gorgeous, rich brown to any sauce they're in. The gills are a little scary, but you can just trim those off.

Now I have to mention just one more thing I hate: fresh pasta. Using it is like cooking with Kleenex. You drop it into boiling water, and a second later it's limp and useless. Fresh pasta's OK for things like tortellini, but for any kind of substantial sauce, dried is way, way better. For the sauce below, which uses both dried porcini and portobellos, it's essential.

Years ago, Craig Claiborne discussed a pasta-cooking method he'd learned in Amalfi, Italy, where the pasta is baked in a bag with its sauce. Later, food writer John Thorne took up the cause. "Since the bag is collapsed around its contents and sealed," he wrote in "Simple Cooking," "the flavor of the sauce completely penetrates the pasta ... Because no moisture escapes, the cook has the opportunity to get a maximum amount of flavor from a minimum of undiluted sauce." Why haven't we all started cooking our pasta this way? Maybe because so many of us have been wasting our time on wussy fresh pasta, which would turn into glue if you cooked it in a bag.

I once made this recipe for my sister, who was standing out in my driveway watching her 3-year-old son shoot baskets. ("I want the net raised lower," he said at one point.) This was not the most riveting spectacle in the world on a cold March afternoon, and my sister kept running inside to check on dinner's progress. A few weeks later, she called me. "I just put on that jacket I was wearing at your house," she said, "and it still smelled like that wonderful sauce you made."

Whereas I am now stuck with a cake carrier that will make my cakes reek of truffles for the next 10 years.

In a small saucepan, bring the dried porcini and water to a boil. Remove from the heat and let the mushrooms steep for half an hour. Then take them out of their steeping liquid (but hang onto the liquid -- you're about to use it again) and rinse them in a sieve under running water until they're grit-free. Dry the mushrooms with paper towels. Chop them. Strain the mushroom liquid through a sieve that you've lined with paper towel or a couple of coffee filters.

In a large skillet, over medium heat, melt the butter and add the onion, garlic, thyme and portobellos, stirring frequently. When the onions are translucent and the mushrooms tender, add the white wine, beef stock and strained mushroom liquid. Bring the mixture to a boil and cook it, stirring frequently, until it is reduced by half. (This always takes longer than you think.) Season to taste with salt and pepper.

Now comes a lot of jumping back and forth at the stove. Preheat the oven to 375 degrees. Cook the pasta in boiling salted water for five minutes less than the package directions tell you. While it's cooking, add the cream and reserved porcini to the mushroom mixture in the skillet. Bring to a boil and boil, stirring frequently, for five minutes, or until the sauce has thickened slightly.

Drain the pasta, but don't shake it; dump it into a bowl and stir in the sauce. Season to taste with salt and pepper. Then carefully transfer the whole thing to a 1-gallon cooking bag. Place the bag in a baking dish, fasten it and make one hole in the top of the bag with a fork tine. (This will keep the bag from exploding in your oven -- a mess you want to avoid.) Bake for 15 minutes, flopping the bag around every five minutes to coat all the pasta with the sauce.

Take the bag out of the oven (duh!), cut it open carefully and pour the contents into a preheated serving bowl. Stir in the grated Parmesan and optional wild mushroom oil, season to taste and serve immediately.