"The Ultimate Sex Test" claims it will tell women what their men are capable of, whether they want to know or not. 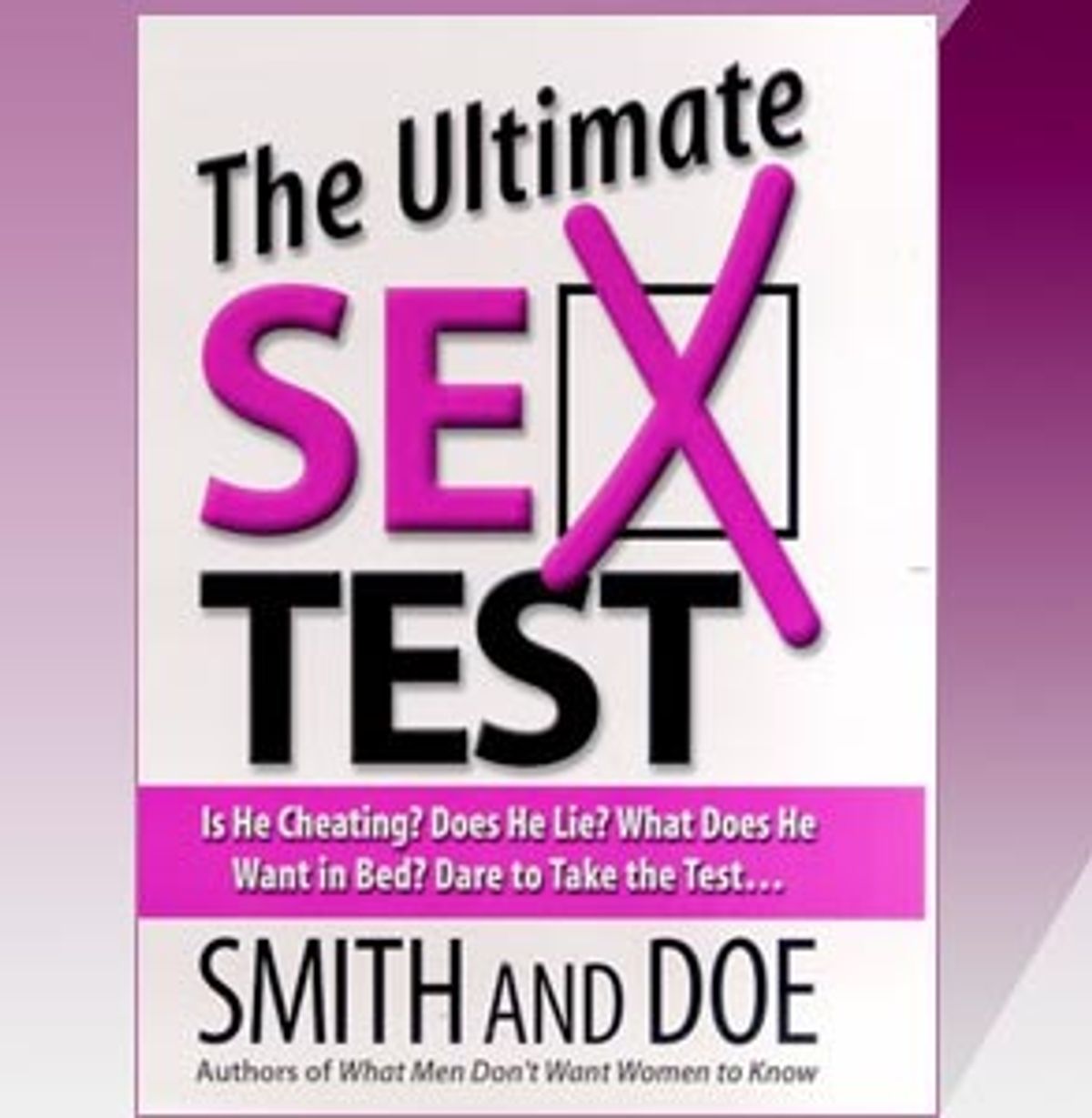 Have you ever privately wondered or actually asked your man, "Am I the best sex you ever had?" If you don't care about the answer, read no further -- there's nothing we can do to prolong a doomed relationship. But if you really want to be the best sex partner he's ever had, you need to analyze the entire realm of his sexuality in regard to you. If your man has already declared that you are the best sex he ever had, chances are you wondered, Is he telling me the truth? or Is he just saying that because I want to hear it? Believe this -- your man will say anything he thinks you want to hear to keep you where he wants to remain -- in a constant, non-demanding, one-sided state of being perpetually unloaded.

But really, you ask -- is it possible that a man who has bedded God knows how many women (he'll never admit to every last hosebag and hooker) can truly say, without reservation, that I am better than every single woman he has ever had sex with? Can I really believe I give the best head of all his ex-lovers? Or scream the most? Or come the most?

If you truly desire to know how you rank in his sexual pantheon, work out the formula below.

Note: We give only odds on how you rate because there is always the possibility that there is a legendary one-nighter lodged in your man's memory, a holy shrine where he worships, that nothing you do will ever replace.

Exclamation of Ecstasy. There are many ways by which to judge how much you are turning your man on. The Exclamation of Ecstasy measures how close your man comes to a spiritual experience when making love to you. The combination of religious fervor and physical ecstasy is the highest point a human can reach in the achievement of total sexual satisfaction. Take, for instance, Tantric Yoga, where the essence of penetration is held until one of the participants can't stand it one more second and screams, "Oh, sweet mother of God, fuck me sweet Jesus, I'm coming, I'm comirll, I'm coming, Nam yo ho renge Kyo!" This is an excellent Exclamation of Ecstasy, although many men over 55 are lost to heart attacks in the overwhelming ecstasy of it. The simplest and most universal Exclamation of Ecstasy is "Oh, God! Oh, God! Oh, my God!" If a man repeatedly exclaims these words while having sex with you (as opposed to while praying in church or making the best putt of his life), he has lost all sense of judgment and would choose this actual moment with you over any one of his fondest fantasies. In other words, by intense and repeated Exclamations of Ecstasy he unwittingly mesmerizes himself to believe that this is the single best climax he has ever had. To determine your man's (EE), select as many choices from below that apply to the two of you, then add them to get your number.

Repeatedly during kissing and non-sexual touching. (10)

Repeatedly while preparing for his impending climax. (3)

Repeatedly during his actual climax. (1)

Note: If he is a confirmed atheist and still exclaims, "Oh, God!" multiply each score by 2.

Calling of Climax. The Calling of Climax is man's oldest method of giving voice to sexual satisfaction. Being a totally nonverbal expression of primal pleasure, it predates verbal communication. It even predates the topic we just covered, the Exclamation of Ecstasy (which was not invented until after the discovery of God). When a man "calls climax," he is informing not only his partner but the entire world that he is having an orgasm. At this instant he truly believes the world is revolving around him. He thinks he is the happiest, luckiest, most blessed man on God's green earth. It is the Calling of Climax, and only the Calling of Climax, by which man establishes his highest degree of dominance over all other genders. To determine your man's (CC), select from the following any description that applies to him -- if more than one, add them together to arrive at your number.

(GS) Genital Stamina. (Note: This is not an aerospace company, high-ranking Greek army officer, or component of a vulva-shaped flower.) Genital Stamina is that force which possesses your man from the onset of sexual excitation to the last thrust of climactic milking. A man who exhibits outbursts of Genital Stamina in irregular, periodic cycles is a man with Attention Deficit Disorder when it comes to you. When a man places a priceless value on the sexual attraction he feels for a woman, he will experience furious bursts of Genital Stamina on a repeated basis (often with the result of annoying you greatly). Even the strongest of men, when confronted by a woman who brings his stamina to Attention! like a Nazi general, is laid low by uncontrollable and repeated outbursts of Genital Stamina. The condition of Genital Stamina was first brought to public awareness by Samson, in the Bible, when he was confronted by an irresistibly voluptuous, heretically desirable, deliciously delectable work of femininity named Delilah. He literally flipped his lid. (Actually, she flipped his lid and gave it to the Philistines.) The point is, if you happen to be like Delilah, be prepared to deal with repeated Samson-sized bursts of Genital Stamina in return for whatever it is you want (particularly if it goes beyond the hair on his head to, say, a Ferrari). To determine the condition of your man's Genital Stamina, select the choice or choices below that apply, add the numbers if necessary, and you will have the number required to solve your equation.

Could re-create the moon and the stars. (10)

Would make a horse envious. (9)

Is probably of great concern to my mother. (8)

Wouldn't sustain the sex drive of a ninety-year-old basset hound. (6)

(OC) Orgasmic Capacity. Orgasmic Capacity is quite simple to measure. We are not speaking here of Orgasmic Volume, with which we deal in another equation. Your man's Orgasmic Capacity is the number of actual climaxes he achieves during a single, continuous sexual encounter, in which the two of you go at it full-bore for no less than five nor more than three thousand minutes. (Be advised that some men will fake orgasms to make you think you are sexier than you really are. And those are the nice guys.) Select the number you recall as being the most actual orgasms your man achieved during one continuous sexual encounter with you.

(OBF) Overall Bodily Fascination. This is the least exact of our judgments, since it is the most subjective for you to make. We understand that women (and men, too, for that matter) can appear to be rationally functioning individuals even while in the deepest and most depressive denial about the degree of loathing they have for one or more of their own body parts. Therefore, do not consider this in any way a judgment on your part. This refers specifically to his Overall Bodily Fascination with you. In order to determine the number, you must now rate him on how much attention he pays to various parts of your body. The more of your body parts that seem to engage his lust, the more his Overall Bodily Fascination is in your favor. From the twenty-five major sensual areas, select those that you think your man just can't get enough of. Give each a value of one (1), then add them up and you'll have the number for your equation.

(SI) Sexual Inspiration. Now we are down to the nitty-gritty. We've all heard the myth, invented by men, that size makes no difference. The reason this myth was invented was because, just as some men are short and some men are tall, some men have small penises and some men have large penises. Unfortunately, men with small penises are more egotistical and warlike, and therefore feel it necessary to manufacture myths in order to negate any failing, however small and insignificant, they might have. This is not to imply that short men have small penises and tall men have large penises. The myth that size does not matter has been sustained throughout time by the fact that the great majority of men do not have large enough penises. When they say, "Size does not matter," they are implying that something else makes up for the lack of size. This is the genesis of the ludicrous phrase, "It's not how big it is, it's what you do with it that counts." The concept of "it's what you do with it that counts" tells women that a man who is truly inspired in his sexual performance more than makes up for a laughable penis. A man's Sexual Inspiration is that degree of imagination, that commitment to exploration, that desire to discharge from the deepest bowels of his libido the most creative sexual acts he has ever conceived that you inspire in him. If you are willing to believe this compensates for anything less than nine inches (which you must believe in order to complete the equation), select from the following the one description that best fits your man's level of Sexual Inspiration.

When it comes to scaling the heights of sexual inspiration, my man could be the hero with me as the heroine in the book:

"Willy Wonka and the Chocolate Factory" (6)

If your total is 50 points, the chances are EVEN that you are the best sex your man ever had. This is the dividing line. From 50 on down, the odds are AGAINST you being the best sex he ever had.

If your total is 49 points, the odds are 49-to-1 against your being the best sex he ever had.

If you scored 25 points, the odds are 25-to-1 against your being the best sex your man ever had.