With irresistible detail, a surgeon explores the cultural and scientific universe of the body in pain. 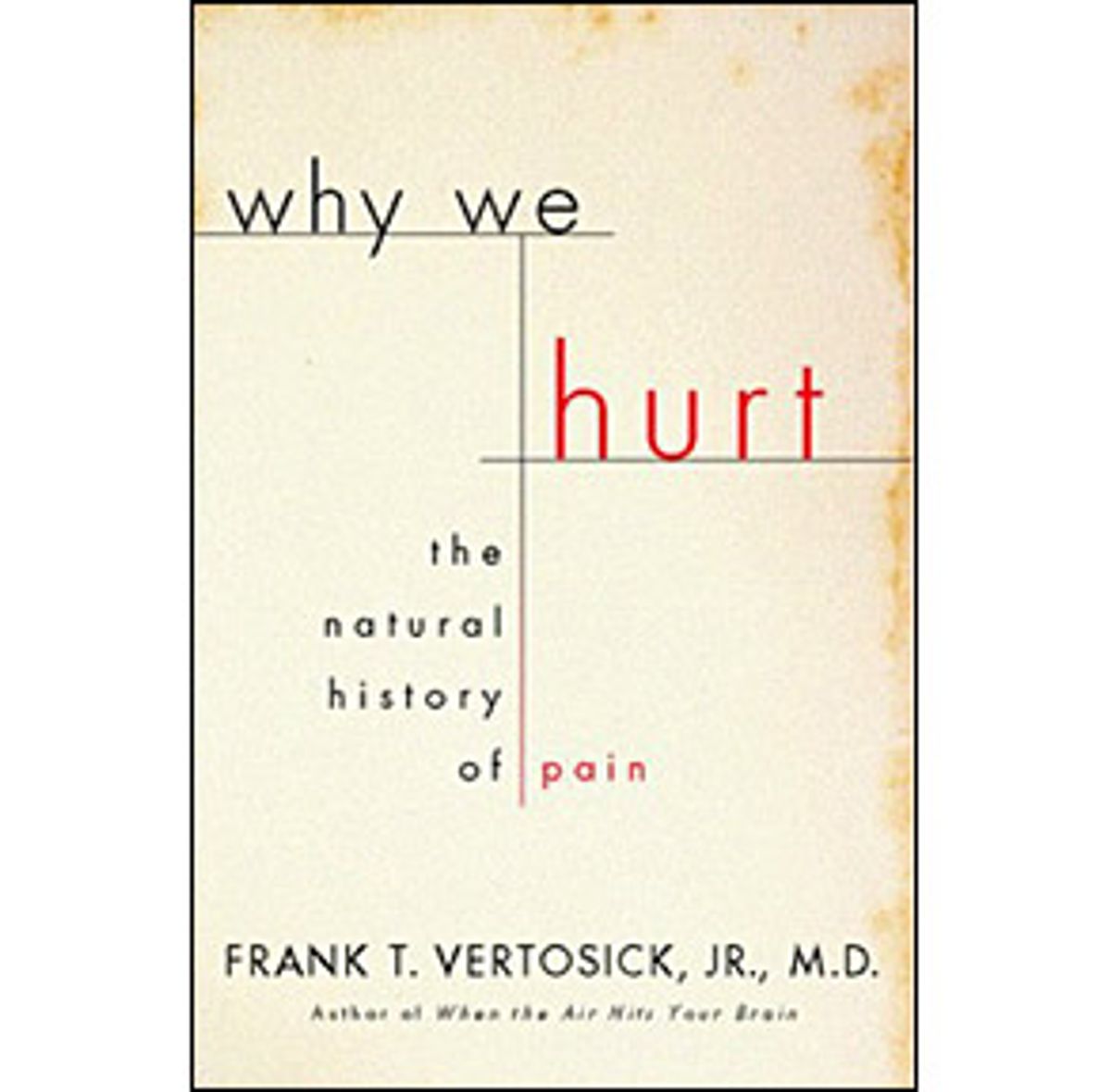 A few days ago, I went to the hospital to visit a friend who'd just given birth for the first time. After admiring her peacefully sleeping baby, I leaned closer.

"How was it?" I asked. I knew she had been dreading childbirth almost from the moment she conceived.

Her eyes widened. "It was worse than I ever could have imagined," she whispered.

Extreme pain -- like that produced by childbirth or, say, limb amputation -- is fascinating precisely because it's at once alien and familiar. We all know what it's like to hurt, and yet some hurts are so profound as to surpass human understanding.

It's this paradox that's exploited by neurosurgeon Frank T. Vertosick Jr. in his new book, "Why We Hurt: The Natural History of Pain." Chapter by chapter, Vertosick introduces us to some of the more excruciating forms of pain, from the misery of migraines to the ache of rheumatoid arthritis. If this sounds about as fun as a trip to the dentist, the book will surprise you. With a humane and generous sensibility, Vertosick explores not only the nerves and neurotransmitters that direct pain, but how culture and belief shape the very experience of it.

In his view, for example, my friend violated an ancient social taboo when she told me the truth about her labor. Women throughout history and all over the world have developed methods, Vertosick writes, "for hiding the pain of childbirth from impressionable young females." When they could, mothers-to-be "sought to give birth alone or with the aid of older (and often postmenopausal) women." When crowded conditions made such withdrawal impossible, they cultivated a stoicism that made birthing look as effortless as blowing one's nose. They even managed to fool many Western experts, who marveled at the ease with which "primitive" women popped out their babies. Childbirth pain, they concluded, was "an invention of pampered, out-of-shape white Europeans and could be cured by stripping them of their high society soft-headedness."

Though this seems a bit shaky as anthropology -- most women throughout the ages, after all, have not had much choice over whether or not to bear children -- the theory is characteristic of Vertosick's efforts to look beyond the physical manifestations of pain. Delivery is so painful, he reminds us, mostly because the birth canal must accommodate the human infant's large head -- the same head that houses our uniquely complex and brilliant brain. Likewise, it's our powerful opposable thumbs that make us susceptible to carpal tunnel syndrome, and our improbably upright spines that expose us to the risk of ruptured discs.

To be human, in other words, is to hurt -- or more precisely, to suffer, which Vertosick describes as the melding of biological pain with psychic pain. Because we can anticipate pain and its consequences (six weeks out of work, no more mountain biking), its effect is multiplied; because we can feel empathy for others, their pain becomes our own; because we can learn from our mistakes, pain imposes on us an inexorable discipline. I hurt, Vertosick might say, therefore I am.

But the author doesn't take himself too seriously, and the book is edged with his sharp wit throughout. In describing an early lobotomy, Vertosick deadpans: "The operator inserted an ice pick under the upper eyelids and hit the pick with a small mallet to drive it into the frontal lobes. The operator then rotated the pick vigorously to destroy both lobes. This created a docile, albeit somewhat dull, patient." The pioneering neurologist, he then notes, received the Nobel Prize for his invention.

Such squirm-inducing descriptions are a staple of the book, but Vertosick never resorts to sensationalism. After all, details as graphic as these require no embellishment. About a woman who could allay the pain of her migraines only by vomiting, he relates: "She had to stop the practice after a bad bout of retching detached one of her retinas and blinded her in the right eye."

In documenting sufferers' desperate search for relief, Vertosick is candid about the role played by reckless, careless or self-serving doctors, whose misguided attempts to banish pain read like a top-10 list of medical blunders. "During the last century and the first half of this century," he writes, "many physicians thought that chronic pain could be cured by cutting nerves. If the face hurt, surgeons cut the nerves to the face; if the arm hurt, they severed the nerves to the arm." More recently, in the 1980s, some orthopedists believed that injecting a powerful enzyme into diseased spinal discs would cause them to shrink, eliminating the need for back surgery. Unfortunately, notes Vertosick, the enzyme -- a key ingredient in many meat tenderizers -- "also dissolved other tissues, including muscles and nerves." So much for that idea.

The author is refreshingly humble about his own work as a doctor -- "most operations are fairly simpleminded," he concedes -- though he displays a surgeon's affection for his handiwork, and occasionally imagines himself a cowboy in scrubs. Of an operation on a patient whose rheumatoid arthritis had caused her first vertebra, called "Atlas," to shift out of alignment, Vertosick recounts: "I lassoed her wandering Atlas to the vertebra below with two thick braids of metal wire, then tossed in bone chips harvested from her hip for good measure."

As a writer, Vertosick is just as confident, taking risks that pay off more often than not. When he described carpal tunnel syndrome as "modern stigmata," I was skeptical: It's hard to muster reverence for a secretary crucified on her keyboard. But the passage soon unfolded into a fascinating, if gruesome, historical account. The nails of ancient executioners were not driven through the palms, as depicted in most statues and paintings of Christ, but through the wrists at the base of the thumb: the carpal tunnel. Pontius Pilate achieved by more direct means the same incapacitating pain experienced by overzealous typists, whose nerves become pinched by ligament, tendon and bone.

Once in a while, Vertosick's flights of fancy fall flat. His efforts to find out why we hurt often lead him to evolutionary theory, which he embraces without reservation. This line of thought produces some eminently plausible explanations -- pain evolved to force us to rest a body part until it has healed, and to keep it away from substances that might infect the wound -- and others that appear much more unlikely. It seems far-fetched, for example, that women's hormonal cycles evolved to generate migraines at times when they are least fertile, in order to discourage unproductive sexual encounters (as amusing as a Darwinian rationale for "Sorry, dear, I have a headache" might be).

Still, you have to give Vertosick credit for trying. In a market glutted with guides for dummies and manuals for total idiots, he has dared to write an ambitious, intelligent book that addresses the mind as much as the body. In this, he follows the ancient Greek physician Hippocrates: "Medicine," as Vertosick quotes him, "is the art of entertaining people until they heal themselves."