Is Syria's next president a geek?

He loves technology. He wants to bring the Internet to Damascus. But can the Israelis learn to love him? 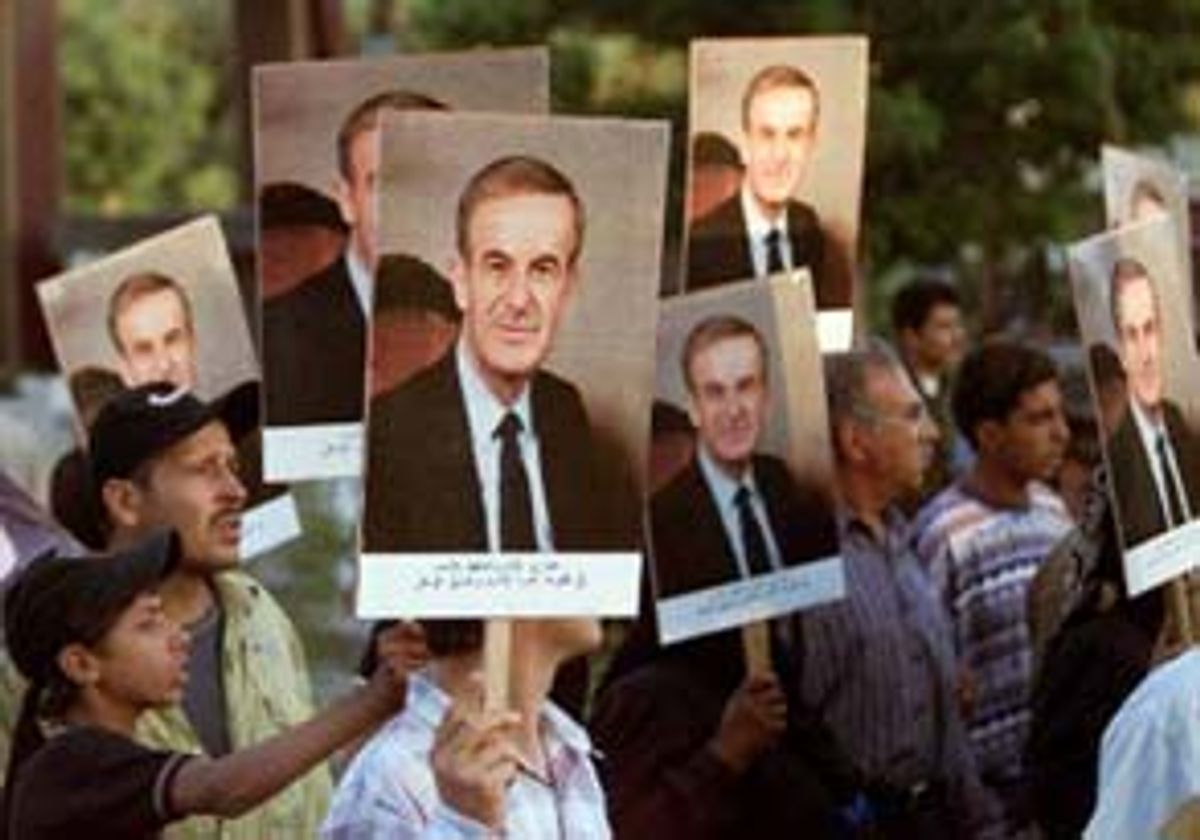 Hafez al-Assad, Syria's longtime president, died Saturday of heart failure while on the phone with Lebanon's president Emile Lahoud. The autocratic 69-year-old Syrian leader had been sick for years, and rumors of his imminent death had often leaked from Damascus. But this was no false alarm -- the news was real, announced in a quaking voice on Syrian national television and followed by mournful reading from the Koran.

The death of Assad, a leader who styled himself as the standard-bearer of Arab nationalism and anti-Zionist sentiment since the day he took power in 1970, ushers in a new era for Syria, its vassal Lebanon, its enemy Israel and the entire Middle East.

The news, which came less than three weeks after Israel's military pullout of southern Lebanon -- ending two decades of protracted war and occupation -- left analysts guessing at the possible consequences of the new Mideast configuration of power: Does Assad's death, combined with Israel's unilateral withdrawal, spell peace for the region?

Wrestling with that $1 million question, the Israeli press expressed cautious optimism rather than fear or sorrow in its coverage of Assad's death. In sharp contrast to the mournful Israeli response to the death of friend and ally King Hussein of Jordan last year, Assad's passing represents the loss of a leader Israel has long viewed as a stubborn enemy, a barrier to peace.

"We Israelis have no reason to shed tears over the death of Hafez Assad. It's a waste of water," wrote Nahum Barnea, a veteran columnist at Yedioth Ahronoth, Israel's biggest daily newspaper. "The man who missed so many trains, and through his intransigence and hesitation stopped all of the processes, has concluded his role in Middle Eastern history."

During his 30-year rule, Assad championed Arab opposition to Israel, bitterly criticized Egypt and Jordan for signing separate peace deals with the Zionist state and poured scorn over Palestinian leader Yasser Arafat for negotiating a gradual and partial return of Israeli-occupied land to the Palestinians. Assad considered these independent diplomatic moves treacherous to the Arab cause, and supported instead Palestinian organizations in Syria and in Lebanon that rejected the peace process begun in Oslo, Norway, in 1993.

When Assad himself entered into peace talks with Israel, he made clear that his aim was to regain possession of the Golan Heights -- a strategic plateau overlooking the Sea of Galilee, which Syria lost to Israel in the 1967 war -- not normalizing Syria's diplomatic relations with Israel. The tensions between the two countries were apparent last winter, when during negotiations in the United States, Assad instructed Syrian Foreign Minister Farouk Charaa not to shake hands with Israeli Prime Minister Ehud Barak. The Syrian president also allowed the official Syrian press to carry virulently anti-Semitic articles even as peace talks went on.

Many Israelis read those signals as proof that Assad was not interested in real peace. That view was seemingly vindicated when the leader refused to compromise on the boundaries of the Golan Heights during a meeting with Bill Clinton in Geneva in March. While Israel was ready to give up the Syrian territory (as defined by a 1923 international border) in exchange for peace, Assad insisted that Israel return the entire Golan, including the eastern shore of the Sea of Galilee, a crucial water supply for Israel.

Given those expectations, many Israeli and foreign analysts greeted Assad's passage on Saturday as the lifting of a hefty obstacle to peace in the Middle East. According to conventional wisdom, only an embrace from Assad, the Lion of Damascus (as his name means in Arabic), could provide Israel with the kind of regional recognition and lasting peace it seeks.

That belief fueled a sense of urgency in renewing negotiations over the Golan last fall, after a four-year hiatus, while the ailing Assad was still alive and Clinton still had time in the White House to broker a deal. But that opportunity was lost this spring when the negotiations foundered.

The question now is whether Assad's son and heir apparent, Bashar, will be able to remain at the helm of the country of 17 million people and do better than his father if and when Syria resumes peace negotiations with Israel.

So far, the succession of power from father to son has been remarkably smooth. Bashar al-Assad, a mild-mannered, mustachioed 34-year-old eye doctor trained in the West, was hastily elected to head the Baath ruling party and appointed chief of the Syrian army on Sunday, just 24 hours after his father's death. Assad had originally intended to have his eldest son Basil - with tough military credentials and "Top Gun" looks  succeed him, but he shifted his attention to Bashar after Basil died in a 1994 car accident. Bashar was called back from his studies in London, and Assad had been preparing him ever since.

The almost monarchistic grooming -- in a country that purports to be a republic -- included intensive remedial military training and, in recent months, the sacking of opponents to the family succession. Various members of Assad's old guard in the army and in government who were perceived as anti-Bashar were eliminated -- including a former prime minister, who was charged with corruption and committed suicide in prison last month.

If Bashar seems virtually guaranteed to take over from his father after a pro forma referendum is called later this month, the transition is nevertheless seen as a period of potential danger in a volatile Middle East, just weeks after Israel's withdrawal from southern Lebanon.

Israel so far has not put its army in a state of alert, a sign of confidence in the Syrian regime's ability to keep things calm despite the death of its charismatic leader. Bashar's image as a gentle, Westernized man with an interest in computers is also helping assuage Israeli fears.

Although little was known about Bashar's youth in Syrias secretive realm, in the past year Bashar has earned a reputation of respectability for his designs on modernizing Syria and his intention to connect his country to the Internet and fight corruption.

The heir apparent recently brought Internet technology to Damascus' universities, overruling the objections of the countrys repressive security services. Bashar is also well known for his desire to rev up the Syrian economy, which is currently in a state of near-bankruptcy and heavily reliant on Lebanese capital. According to Azmi Bishara, an Arab member of the Israeli parliament, the younger Assad expressed great interest in Israel's successful high-tech industry when the two met in Damascus recently. Assads curiosity seems to promise a more open, accommodating and business-oriented Syria than the country led by the elder Assad, who seemed mostly concerned with recovering lost Arab territory and glory.

But a new Middle East of regional peace and economic prosperity is still years away. Most analysts agree that peace negotiations between Syria and Israel are likely to be on hold for as long as it takes for Bashar to establish a domestic image as a tough Arab leader worthy of his fathers legacy and consolidate his power.

"First go for power, then, peace," advised a headline in Sunday's Ha'aretz, an Israeli daily. Before Assad took power in a bloodless coup in 1970 and imposed three decades of iron-fisted "stability" on his countrymen, Syria witnessed a number of palace plots and uprisings. A new war of succession is not impossible in the future. Assad's ambitious and resourceful brother Rifat, now in exile in Spain after a power struggle with Assat, claimed Monday that he, not nephew Bashar, is the rightful heir to the presidency. Members of Syria's Sunni Muslim majority who oppose the rule of Assad's Alawite Muslim minority could also challenge the young heir.

"As long as Syria has a minority regime and an autocratic regime, I'm not sure a deal with Israel is in the immediate interest of the regime," said Professor Ephraim Inbar, director of the Begin-Sadat Center for Strategic Studies at Bar-Ilan University in Israel. "It's more pressing for the heir to find ways of staying in Lebanon and staying in power."

Even before the senior-Assad's death, the Israeli pullout gave new life to those in Lebanon who reject Syria's decade-old heavy-handed meddling in Lebanese politics and massive military presence on Lebanese soil. Calls for the departure of Syria's estimated 35,000 troops and hundreds of thousands of migrant workers in Lebanon were voiced again last week in the leading Lebanese newspaper, An Nahar. Now that the domineering Syrian leader is dead, analysts speculate that the largely Christian political movement to chase Syria out will gain even more momentum, possibly straining relations between Lebanon's different religious communities and inaugurating a new era of Lebanese instability.

Other groups may seek to exploit Syria's temporary weakness. Hezbollah, the Shiite Islamic movement that defeated Israel in southern Lebanon, has been coordinating its strategy with Damascus since the mid-1980s. Assad used the Iranian-backed guerrillas to bleed Israel into giving back the Golan Heights, without ever slipping into full confrontation with Israel (a scenario which Syria's outdated Soviet-era army could not afford). Avoiding escalation required "excellent talent," said Inbar. "I'm not sure that Assad's heir will continue to have this type of wisdom." Assad, allegedly, was capable of ordering its proxies to abstain from striking Israel when it served Syria's interests; but, with a weaker leader in Damascus, "we may see local initiatives by Palestinian organizations or Hezbollah to inflict pain on Israel," said Inbar.

On the other hand, Assad was loath to offer Israel's northern towns any kind of protection from cross-border attacks as long as Israel occupied the Golan, and all but publicly opposed the deployment of Lebanese troops in southern Lebanon. His death may provide the Lebanese army with an opportunity to patrol the recently-liberated south and mitigate Hezbollah's threatening power on Israel's northern border. A first token force of about 1,000 Lebanese soldiers and police is expected to move south later this week.