Now that it's cool to be a dad, all you need is love and a Land Rover stroller. And maybe a pint. 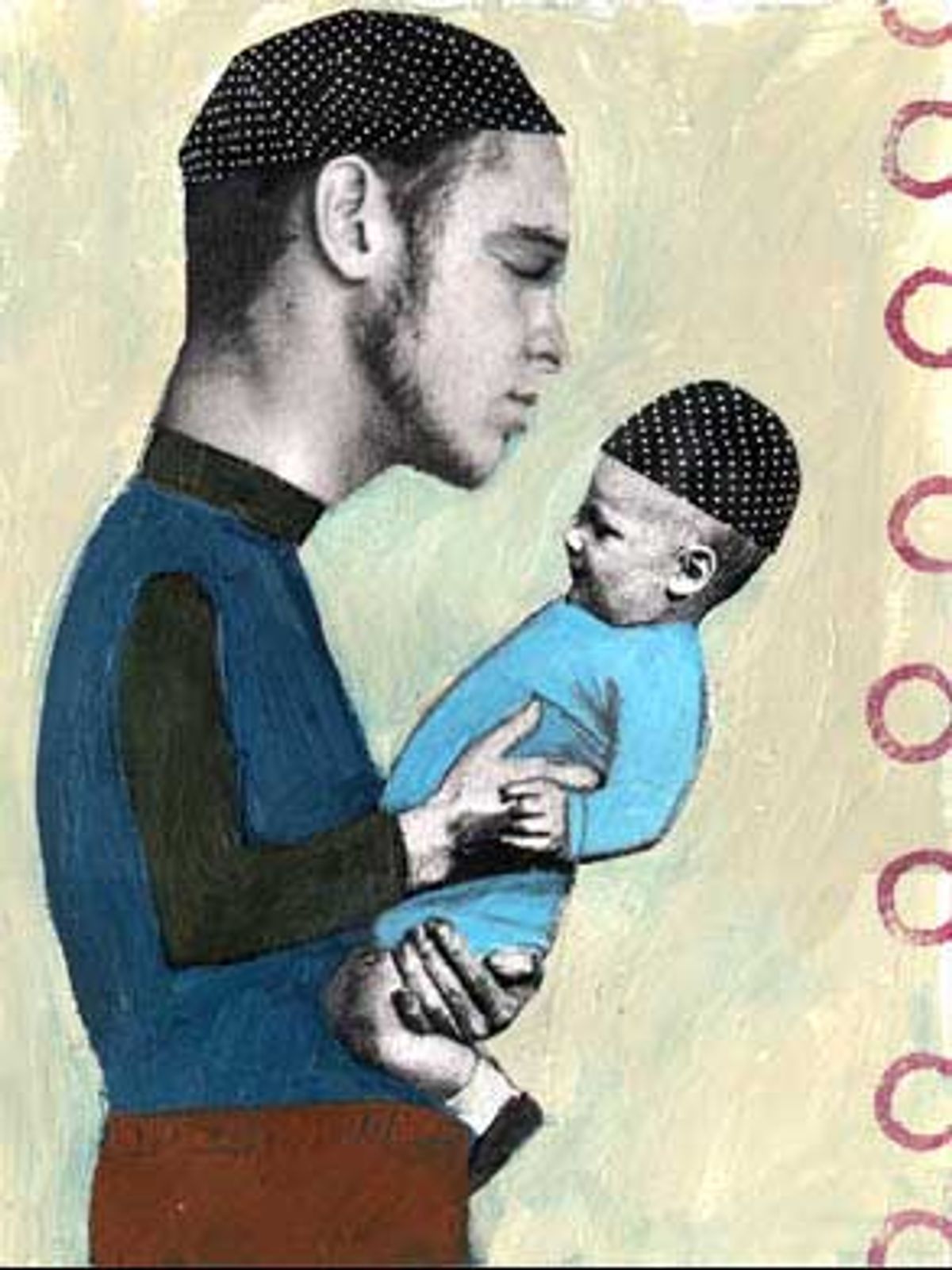 After eight years of being a father, I have discovered that it is now officially cool to be a dad. How do I know? Because everyone, from Calvin Klein to American Express, is telling me, baiting me, chasing me everywhere I go. Because many men's magazines are regularly concocting juicy (yet "responsible") editorial content aimed at dads. Hell, there's even a publication for fathers called "dads," a glossy affair incorporating all the suburban comfort of Parenting with the macho posturing of Sports Illustrated and Outside and the hip pretensions of Rolling Stone -- complete with Cal Ripken on the cover.

Even celebrities -- who 10 years ago would have considered their progeny a liability to their image as sexually attractive bachelors -- now regularly flaunt their devotion to their babies, hoping to gain sensitive-guy street cred. Maybe it started with Kurt Cobain and Frances Bean. Or maybe when Nick Hornby's novel "About a Boy" -- in which a frankly useless 30-something bloke invents a kid in order to impress women, only to find that fatherhood itself may be as fun as a good romp -- became an international bestseller. Whenever it started, you can now see images of father and child everywhere: Mark McGwire is pictured with his son on Safeway-brand cereal, and David Beckham, soccer superstar and husband to Posh Spice, made national headlines in England when he blew off training to be by his infant son's side when he was a touch feverish.

All of which makes it easier for a regular father to do regular things with his regular child without feeling like a social pariah or potential pedophile. Want to grab a coffee at 11 a.m. on a Tuesday with your child? You can, in the full knowledge that nosy cappuccino sippers won't stare at you, wondering a) why you're unemployable, b) why you send the wife out to work for you or c) what caused you to be convalescing. Because the fact is that these days, it's a whole lot more respectable to be a dad.

But after my own foray into fatherhood (five years of it as a single parent), I have to admit to feeling more than a little curmudgeonly toward this whole "New Fatherhood" trend. Where, I wondered, were all these ads, publishing outlets, corporations and celebrity endorsements in the dark days of 1992, when dedicated dads were vaguely seen and certainly not heard? When I read that the editor of Later magazine had declared fatherhood "the new rock 'n' roll," I had to face the fact that I was merely a Leonard Cohen in these raunchy days of Liam Gallaghers. I might not even be racy enough to count as a Mick Jagger. The effect on me -- basic insecurity -- was just what the advertising industry ordered.

Suddenly I had to wonder: Was I not glamorous enough? Should I be better equipped? Was my backpack uncool? Had I, and millions of others, been doing it wrong over the past 20,000-odd years?

"It's something of a switch," says Dr. Wade F. Horn, president of the National Fatherhood Initiative. "I think it is encouraging that advertising is showing more inspiring and uplifting images of fathers. I can see the ad ... where a father's with his kid at the baseball game and it says, 'Two baseball tickets, $20; two hot dogs, $10; afternoon with your son, priceless.' I think those are helpful messages and I don't want to be too cynical of those.

"I am, however, concerned if what that attention really translates into is a sense that fatherhood has become faddish or trendy," continues Horn, who founded the nonprofit organization in 1994. "Because if you sell fatherhood as the latest fad or trend, when that fad or trend dissipates you have no ongoing motivation for men to want to be good, responsible and involved fathers to their kids."

Horn has good reason to feel cautious, judging by some of the rubbish I've seen peddled. The premiere issue of dads contains an editorial that says things like: "The cultural and social climate calls out for this magazine" (read: Now we can get loads more advertisers to help back a publication like this) and "We want to be just as engaged and successful with our children as we are in our professional lives." This apparently involves, among other things, surviving Disney World and purchasing minivans designed to resemble P.T. cruisers in an attempt to assuage the male ego.

The largely gyno-centric Parents magazine isn't any better. In the June edition is an editorial titled "Giving Dads the Respect They Deserve." It discusses how the magazine has shifted its focus to recognize these "new fathers" who are now playing "such important roles in their children's lives." And to underscore the magazine's astonishment that fathers can be parents too, it adds: "Parents magazine regards these men as pioneers." A bit of a pious slap in the face for people like me who were quietly getting on with it before focus groups were created to fleece us with flattering ad images.

And this April, a British lad magazine called Later, better known for showing men how to nurse their pints than their kids, supplemented its usual fare (scantily clad models, gizmos, booze, fighting and sports) with a section called "Dad." In an earnest attempt to meld adolescent recklessness and adult responsibility, its pages have included reviews of the toys a man can "enjoy" with his children (Action Man figures, super-soakers and remote-control racing cars) as well as advice on whether children should "know Daddy's drunk" or whether he should "pretend to be a normal sober human being."

Another persistent, patronizing belief of those marketing to the "New Dad" is that no self-respecting father would ever be seen pushing a pastel Graco stroller -- or any other baby care accessory that looks, well, babylike. That's why companies such as Land Rover have saved us with a variety of "manly" strollers that look like off-road military vehicles.

And when it comes to making sure a dad's masculine dress sense isn't compromised by parental duties, look no further than Dadgear.com, an e-commerce site that proclaims fatherhood to be "an extreme sport" for which any responsible dad should "gear up." "Dads deserve to be properly outfitted," the site declares in a passage that could serve as a manifesto for the macho caregiver: "We need quality gear that is both stylish and organized. No duckie prints, no pink bunnies, no Barney, no Pooh. At the Dad Gear Company our sole mission is to design tools that help and honor the modern Dad. Gear that shows how proud we are to be parents." All this prattle is used to flog a range of rugged bags and clothing that will make sure people don't view you as some Pooh-loving sissy. How gender stereotype-tastic!

Of course, believing that dads need to be coaxed into fatherhood with high-tech toys and outback gear is as pathetic as believing that all moms spend their days worrying about the relative effectiveness of fabric softeners. But "new fatherhood" is a relatively untapped market and every day more companies are recognizing the selling power of smiling, buff dads with cute kids in their advertising. Chevrolet wasted no time planting a young, handsome, plaid-clad dad with his blue-eyed infant son on his shoulder beside a truck; online gift company Red Envelope depicts a dad having a "relaxed and natural" giggle with the kids; even Maxwell House shows a dad sharing a joke with his kids -- he's obviously cheery because he's had his caffeine.

Tim Maleeny, director of strategic development at the Publicis@Hal Reiney Advertising Agency in San Francisco, acknowledges an accent on dads in ads. "I think you are seeing more of that in advertising," says Maleeny. "One campaign we've done is for e-Toys, which was very successful. They had a choice of talking about the stuff they sold, the toys or what that means in the context of a relationship between parent and child; and we did do a spot involving a dad and his little boy. That relationship has been a powerful emotional chord to strike over the years, but people haven't really tapped into it.

"The other thing that is starting to be recognized by marketers," says Maleeny, "is that when you have a spot showing a relationship between a father and his child, you're not only talking to men in a way they frequently haven't been talked to, it's a very powerful way to talk to women" (who usually control the family purse).

But these airbrushed images of father-child happiness sell fatherhood without the nasty bits. Which makes me wonder what will happen to the new crop of dads who are seduced by such added-sugar imagery. Will they run back to their desks and business trips once the marketeers turn their focus (groups) in another direction? Will the gritty reality of parental responsibilities (cooking proper meals, helping with homework, enduring yet another Pokimon discussion) scare these new fathers away? Because fatherhood has as many moments of ragtime blues as rock 'n roll, which means your tastes and attention span had better be broad.

"If all fatherhood becomes in the 21st century is another marketing niche, another tool to drive consumerism, then I'm not sure that is what's going to be necessary to reinvigorate the sense of obligation and responsibility to one's children and motivate men not just for the easy times but the tough times," says Horn. "It looks awfully nice to walk from that new car or to the baseball game, because those are the good times. But there are also those 3 a.m. feedings when your kid's screaming, or they're up with a fever and vomiting over the floor. Without awareness of those difficult times, it runs the risk of a man who, when faced even with this modicum of difficulty, will exclaim, 'Hey! This isn't what I was sold! I'm outta here!'"

Meleeny has greater confidence in the public's level of intelligence. "People's bullshit meters are more sensitive today than ever," he says. "I think at the end of the day, if the ad comes from the central place of a strong brand and what they believe, people will respond to that because it's human or real. If, on the other hand, it's a borrowed interest -- 'Let's get some kids and puppies in this ad and maybe they'll like our products' -- people are going to see through that because they do take fatherhood very seriously. If fatherhood is there as a borrowed interest, it'll be seen through."

I admit to having little faith in this current state of fast money and easy times. People appear to be more superficial than ever, and though everyone seems to want to score sensitivity points in business and social circles, the New Fatherhood seems to be nothing more than the latest leaf in a modern man's portfolio.

Many worthy fathers remain outside this newly established era simply because they don't fit within the necessary style parameters. The dads who could use a more supportive spotlight -- single fathers, poor fathers and ordinary fathers who have the desire to parent their children but not the expensive tools to do it with panache -- will remain outside the glossy magazines and Chevy ads. They're too real to fit into the New Fatherhood Utopia that's being hawked.

And there will be a crop of new dads who didn't read the small print when they consummated the contract during these "supportive" times for fathers. Some will be the people who love new things until the novelty wears off. Others will be the people who think you can switch parental responsibilities like you can switch careers. But most will be people who bought the dream and woke up to find the town empty with no further directions.

Steffan Chirazi is a freelance writer in San Francisco.