As the party implodes

Reform leaders discuss canceling their convention as Perot-Buchanan forces trade insults, and the party prepares for its vote-by-mail presidential nomination. 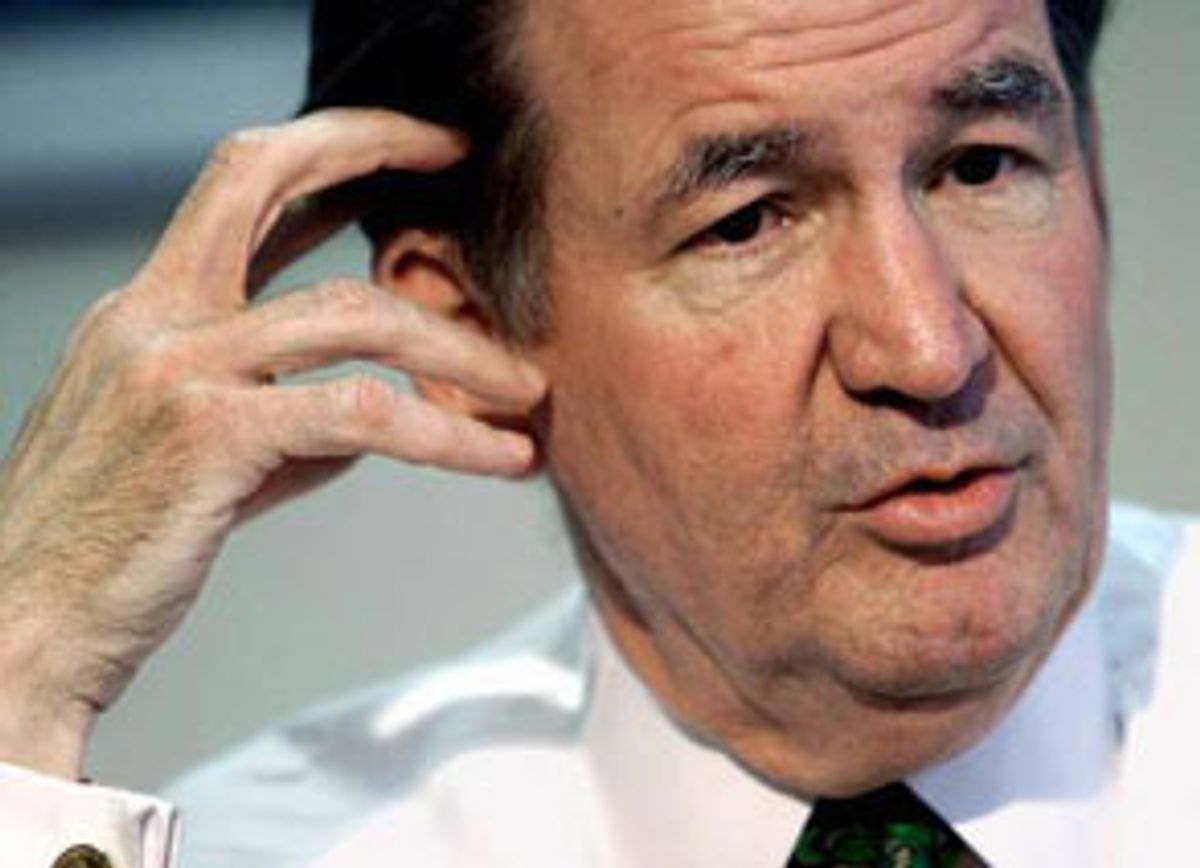 Just when you thought it couldn't get any weirder, Reform Party leaders are talking about canceling the party's national convention, citing "threats of violence" made against the party's secretary, Jim Mangia.

Earlier this month Delaware state party chairman William Shields, a Pat Buchanan ally, sent a memo to state party leaders calling for the removal of Mangia, who is allied with party founder and Buchanan rival Ross Perot. "I am interested in a resolution at the convention to remove Jim Mangia from any leadership role in this party, and to physically eject him, along with any trash or dangerous biological waste that may have found its way onto the convention floor." Mangia, who is gay, took the remark as an anti-gay slur.

The clash led party leaders to debate canceling the convention altogether in a meeting of its executive committee last week. Former Reform Party chairman Russ Verney, a longtime Perot ally, admits there's been talk about canceling the convention, but adds, "I think it's a wait-and-see attitude. I think it's not about canceling, but about getting a handle on this growing feeling of intimidation. It might just result in some additional security measures and things of that nature."

The Shields-Mangia battle is the latest manifestation of the rivalry between Buchanan and Perot that's currently dividing the party -- now that both men succeeded in driving Minnesota Gov. Jesse Ventura out. Mangia is now seen as the leader of the anti-Buchanan faction of the Reform Party. While he joined forces with Buchanan allies to oust the Ventura-backed former chairman, Jack Gargan, it was a temporary alliance, and Buchanan backers like Shields see Mangia as the enemy.

The latest dust-up is not doing much to help Reform shuck the freak show label it has earned over the last year. It comes as the party's mail-in primary struggles to get off the ground. Reform activists on all sides are already crying foul, and party leaders are still trying to tinker with a nominating process -- and fight for control of $12.6 million in federal matching funds -- that is set to officially begin in less than three weeks.

"It's an experiment with a capital E" said Donna Donovan, the often-fired and just-as-often rehired national press secretary for the party. "Clearly the system is far from perfect, but we're just all going to have to wait and see what happens."

In California, for example, voters who are not registered party members must either send a letter or a fax to the state party headquarters. They will then be added to the list that will be sent to the national party. Voters should receive their ballots in mid July, and votes will be counted up until the party's national convention in August, where the nominee will be announced.

The party is expected to announce later this week that it will also allow eligible voters to cast their ballots via the Internet. "Each ballot will come coded with a PIN number, and people who want to vote electronically should have the option to do so," said Ray Mills, chairman of the California Reform Party, who is backing Pat Buchanan.

Yet Robert Bowes, chairman of the Maryland Reform Party and a backer of Pat Buchanan, said hopes of an honest, open, democratic primary are a pipe dream at this stage of the party's development. "The mail-in primary is really an effort to show that we're inclusive and democratic. It's a great goal. We're just a few steps away from getting there," he said. "I'd love to see it go off smoothly, but I believe we're kind of hamstrung because of the lack of financial resources. The executive committee adopted this as a feel-good maneuver."

"The Reform Party isn't doing any of this. The cost is being pushed off on the campaigns," he said. "The Buchanan campaign is trying to conduct the operations of the party because the leaders of the party are not competent enough to do it themselves. They're spending all their time on bickering. They don't have the business sense to run this, and we don't have the resources."

Indeed, there does seem to be a stark division in the level or organization of the Reform Party on a state-by-state basis. Even in California, one of the most organized states, the process is just now ramping up. But in states like Utah, Connecticut and other smaller states, the process is even further behind.

"I'm not particularly certain of all the details. I've been kind of swamped lately," confessed Utah Reform Party Chair Keith Ridgway. "We're a small organization in this state, and we're just getting things off the ground still." Ridgway said his efforts as Reform Party chair in his home state have been put on the back burner because he is also trying to get a new business off the ground.

Donavan said that in her home state of Connecticut, getting lists of registered Reform Party members has proven cumbersome. "We are in New England," she said, as if the region were synonymous with technological backwater. "Some of the local county registars are still working with pencil and paper in some parts of the state."

Both Buchanan's allies and party leaders backing other candidates like scientist John Hagelin say the party's primary process is in disarray. "It's total chaos," said one party leader who is backing Hagelin. "Every state has completely different requirements. It's a total madhouse."

Bowes said it may be a product of trying to do too much too fast. "Even the Republicans and Democrats settled their nominations on the convention floor basically until 1964," he said. "Hagelin's people have been trying to accuse us of fraud. That's just crazy. The reality is, we are not equipped to have a truly open primary."

Still, Michael Ferris, head of the party's presidential nominating committee, says the primary vote is proceeding as scheduled, and he fully expects the results from the vote to determine the party's eventual presidential nominee. "We have been very upfront with all the candidates. None of them have expressed any discontent whatsoever with the process," he said.

Bowes said all the uncertainty surrounding the popular vote may well lead to the nomination being settled on the floor of the convention -- assuming, of course, that there is a convention. "Who gets to participate in this popular vote? Is it only the states that are well organized? Some states just aren't there yet. If none of their votes are counted in the system, is that a system of full integrity? I don't think so."

But Ferris and Donovan insist the party can make its popular vote stand -- even if some people are not allowed to participate because their state's party organization is in disarray. "I think if we get a significant number of ballots back -- say 100,000 or so -- I would expect the popular vote to stand." Donovan estimated that about 30 states have organizations cohesive enough to get ballots out to voters, and that the bulk will probably come from California and New York.

Many original Reform Party members would be unwilling to settle the nomination on the floor of the convention, Donovan noted, no matter how imperfect a popular vote tally may be. "This is where it's hard for a lot of the new members to understand the Reform mindset," Donovan said. "The people who came up through the grass-roots Reform campaign and so forth, the impulse is to involve people in the process. Will it work or won't it? It's a big question. Maybe it can't work. Maybe the system is so screwed up that if you're too open, fair and democratic, you risk being trounced in the process."

Party bylaws also stipulate that a popular vote can be overturned by two-thirds of the convention delegates -- which could be a recipe for chaos given the feuding Perot-Buchanan factions of the party. "That was written by the Perot faction in 1996 because they saw how imperfect this system was," Bowes said. "These guidelines were not exactly written by Hamilton and Madison. It's more like Hamilton and Burr."

But Donovan said the bylaws, however imperfect, reflect the idealism that helped build the Reform Party into what it is today, whatever that may be. "It's hard to take that step back to look at it like it's something going on in a petri dish," she said. "It's been nine years out of our lives. We're emotional about it."

The talk of canceling the convention came the same day Buchanan loyalist Kelly Abt was fired by party chairman Gerry Moan as head of the credentials committee. "As a consequence of this cynical, corrupt action, the credentials committee will be totally controlled by Verney and his hand-picked appointees," screamed an e-mail from Linda Muller, who runs a pro-Buchanan e-mail list. "By this, Verney and his puppets will recommend which delegates are seated at the National Convention in Long Beach and which will be excluded. The Big Fix is in."

"I think it's time for [acting national party chairman] Gerry Moan to do the honorable thing and resign," said Bowes. "Pulling a national temper tantrum like this is just going to wreck the hell out of the party."