Staying on the island

I lived my own version of "Survivor" one winter in St. Thomas with a friend and three strangers. 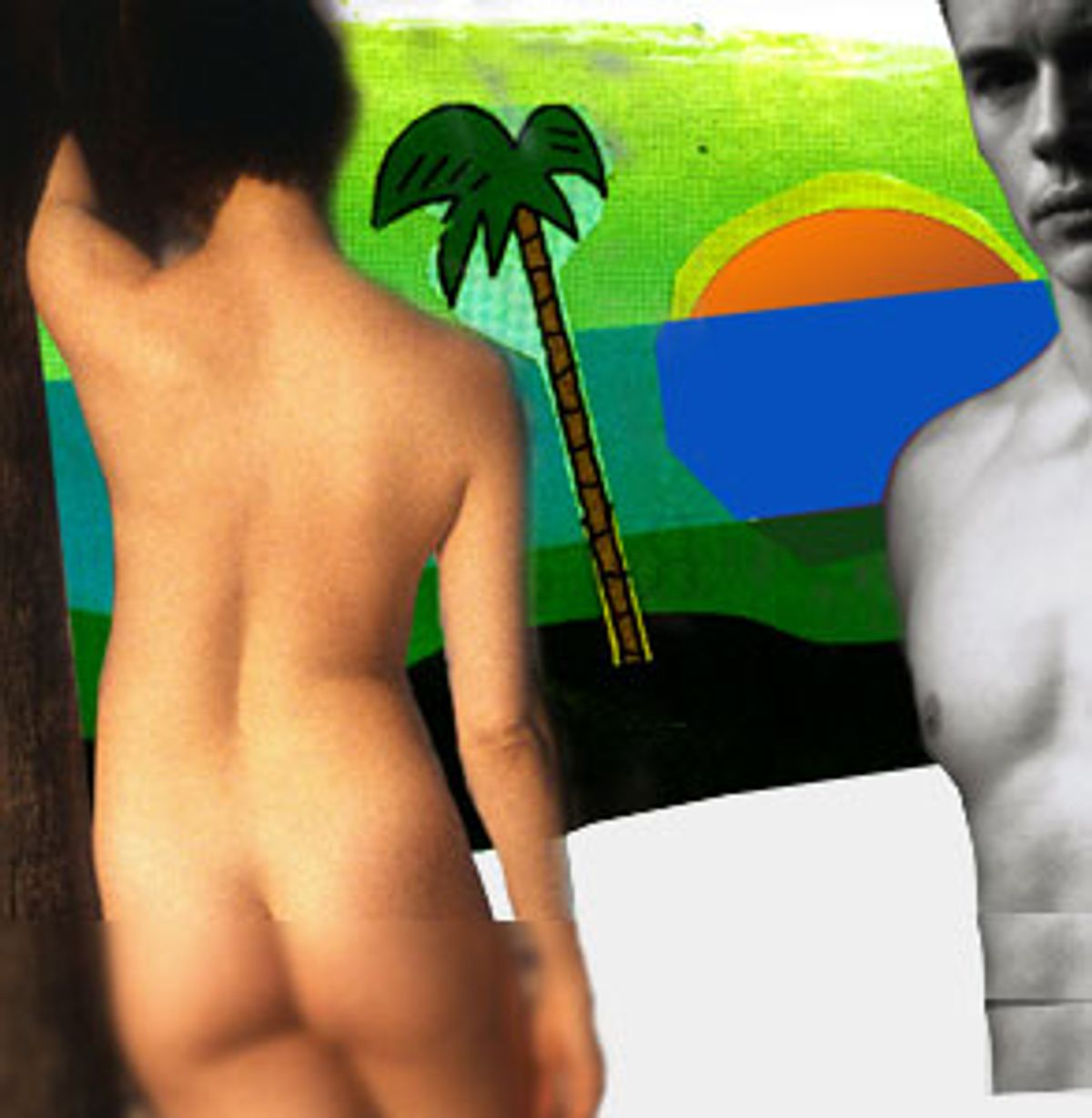 Forget "Gilligan's Island," "The Real World" and "Lord of the Flies." The CBS show "Survivor" reminds me of a more familiar social laboratory. A place where sadists with whistles force everyone else through team competitions, encouraging torment of the weak. A place where old people suck, where alliances are based on fear as much as affection and popularity feels like a life-and-death matter. I mean, of course, the Good Shipwreck High School.

The only good thing about adolescence is the body's discovery of sexual pleasure. But in high school, and on "Survivor," sex falls prey to the manipulation and fear governing everything else. The petri dish designed by CBS (the classy network!) is remarkably vicious and remarkably high school. Stocking the island with mostly young, cute, single people means that the oldsters -- the teachers, principal and parents -- will be voted off the island first (two down, one to go). Then the kids can start hooking up. It's as if CBS considers it foreplay to put tribal elders out on ice floes, just the thing to get the kids feeling all "Blue Lagoon."

The depressing thing is, CBS is probably right. Nobody's going to starve with a camera crew around, so the chits exchanged in "Survivor's" popularity-contest economy increasingly will be sex or the promise of sex. I'm guessing that's where the million-dollar grubbers will go from here, because I lived through a similar situation 15 years ago.

It was my first Boston winter, and I was young, stupid and cold enough to spend a week in St. Thomas with three strangers and my friend Hank. Two of the strangers were, it turned out, worse even than the unpleasant squabblers of "Survivor." One's mind naturally turns to bodily pleasures in the tropical sun, but Hank's friends Edmund and Gwen spoiled paradise with their avarice. They spent the week bartering sex as if it were a dwindling pile of coconuts.

Hank and I were greeted at St. Thomas' tiny, pastel airport by our host, Edmund; Buddy, a mild ex-wrestler who said nothing I can remember but was always pleasant; and Gwen, a 6-foot blond heiress whom Hank was dating. The four of them had shared a decadent adolescence in horse country north of Baltimore.

Edmund's parents owned the house we were staying in, but they were in Europe somewhere. The house had three bedrooms: one for Buddy, one for Hank and Gwen, and Edmund's. As the last and self-invited guest, I took the living room couch. Edmund, who was a gracious host in that bully-with-a-cigar way, insisted I take his bed. I insisted back. He out-insisted, and I thanked him and turned in.

Half an hour later, Edmund slid into bed next to me. I tried to sound asleep. He put his hand on the small of my back. I was silent for 10 seconds, debating, then said without turning my head, "Edmund, if you want your bed back, I said I'm happy to sleep on the couch."

"It's cool," he murmured in calming-a-dog tones, moving his hand in a little circle. I sighed noisily, swept up my clothes and stamped out to the living room couch. I hoped Edmund would feel ashamed when the others found me there in the morning.

No apparent shame, but he was cooler toward me after that. I became more polite. My rebuff made me aware of being in his debt, so I strove to be a great guest all week, cleaning up the house and picking up tabs in restaurants.

The next day, we went to a beautiful cove where pelicans flew overhead and the water was clearer than air. My goodwill bloomed in the sun and in my head I forgave Edmund for his stealth attack (realizing I didn't have much choice). The talk dwindled pleasantly, and I assumed we were all basking.

Gwen didn't care for quiet, though, and her need for action elbowed contentment aside all week. That first afternoon, she swam out what seemed like miles to a 40-foot sailboat. We watched through binoculars as she circled the craft, then climbed aboard like an Amazon pirate. She returned about an hour later.

Hank gazed at the 6 feet of her emerging from the sea. His smile vanished, however, as she said, "Hey, Virginia, the guys on that boat asked the two of us to party with them tonight. You want to go? Sorry, guys," she added with a phlegmy laugh, "you three aren't invited."

Hank looked down quickly, and I mumbled something about the group sticking together. Over the next two days, Gwen kept inviting me to cruise other men. Whenever we were out at the beach or in town, she laughed and whooped until the island's bolder inebriates bellowed back at her, like randy elephants at a watering hole.

On the third day, I went for a walk with Hank and asked him what was going on between him and Gwen. "She says she's not sure how she feels about me right now, so she wants to be single on this trip," he explained. Yes, he'd paid her way down there. No, she hadn't told him about her change of heart until they got here. I admit I judged this in terms of the same sexual economy that appalled me when Edmund jumped me, presuming a sex-for-housing trade. I thought Gwen was cheating Hank, using him for a free vacation.

I commiserated with him and gently inquired what he saw in this vulgar harpy. "She's wild, she goes for it," he shrugged as we returned to the house. And there she was, buck naked on the couch, getting a massage from Edmund. After a tense moment, she got up off the couch and walked to the room she and Hank shared, holding her T-shirt casually up to her breasts.

I wondered what this double betrayal of Hank meant. I figured Edmund was leaving no back unrubbed in his search for in-house sex and Gwen had told him she was free. Gwen's motivations were less clear. I don't think she and Edmund had sex that week, but leaving the possibility dangling may have been her way of securing her host's goodwill.

Edmund and Buddy initially shared Hank's admiration of Gwen's "go-for-it" spirit and liked having a wild blond around. After three days, I probably would have been the one voted off the island, but by the fourth night the guys were also wearying of her braying exhibitionism.

That night, Edmund took us to a restaurant where, he promised, "no tourists go." We were indeed the only white people there, and I didn't feel as welcomed as Edmund was acting. The food took a long time coming, and again, Gwen got bored. Never one to ride that out quietly, she walked out to the middle of the restaurant and commenced a slow bump and grind to the reggae on the radio.

There were about six men in the place besides the bartender, the waiter and us. All the other men's eyes lit up. A short guy with dreadlocks tucked into a knit cap walked up and rotated his hips in front of Gwen. She leered amiably; he grabbed her ass and danced close. The rest of the room fell silent.

The little Rasta seemed surprised his hands were allowed to stay, but then pulled himself in, grinding his crotch on her long thigh while she grinned down at him. Edmund, Hank and Buddy watched nervously. I was sure we were headed toward a fight over her honor.

But then she fell drunkenly into her chair, waving her arms like Yosemite Sam, and the tension dissipated. The food finally arrived. After we ate, Gwen stumbled toward the ladies room and never came back.

Half an hour later (one savored the silence before one searched), I found her sprawled unconscious in a hallway between the kitchen and the bathrooms. She smelled very bad. The four of us hoisted her into Edmund's Jeep, and she twitched and babbled, eyes closed. As we sped into the moonlight, she reached up her skirt, pulled off her shit-filled panties and threw them onto the road. It would have been hard to be an uglier American.

She threw up some in Edmund's bathroom, and I tended to her because nobody else would. I was starting to feel the warmth of pity when Gwen explained that she was anemic and was sick because she hadn't brought her iron pills on the trip. "I figured, fuck it, I'm on vacation, man," she explained with her psychotic grin.

The next day, Edmund demanded "guy time" with Hank and Buddy and sent me to shop with Gwen. This exile to the straw doll and T-shirt boutiques, I was sure, punished me for moving to the couch and Gwen for losing control. Over lunch, I decided to be a yenta on Hank's behalf. "I'm not sure what's going on with you and Hank," I began, "but he really likes you, and this week is making him miserable." Gwen heard a request, and her eyes glittered shrewdly as she started to deal.

"Oh wow, I get it, you're into Hank!" She laughed. "That's cool, man, you should fuck him if you want to." She laid her hand on my arm conspiratorially. "I can see why you want him; he's got that inverted pyramid body." It was as if she sensed the guys were getting fed up with her and sharing Hank might put me on her side. I started to explain that I was just worried about my friend, not angling to sleep with him, but she'd already begun a mating dance with a frat boy at the bar.

I continued to squelch my animosity all week to preserve the social order and stay on the island. I wonder if I would have the sense now, 15 years further into adulthood, to just change my flight and leave. I wonder if any of the CBS castaways said "Enough!" and excused themselves. Or is the magic sum of One Mil-lion Dollars enough to keep them all trapped in tropical high school until the popular kids turn on them?