It's disconcerting to hear someone make that much noise during sex. 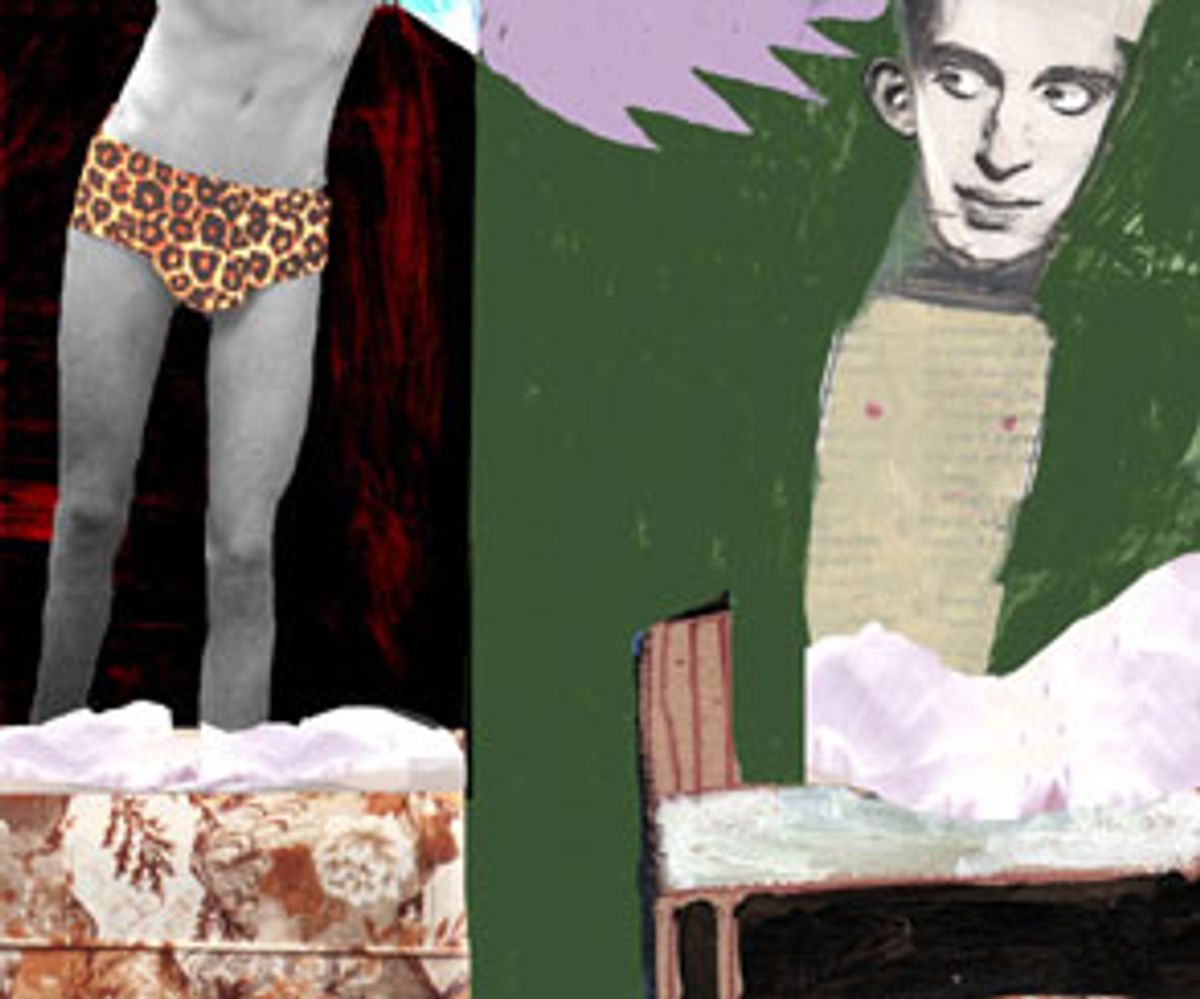 The loudest male orgasm on record took place in a motel room in Big Sur, Calif., on a recent cold spring night. I was next door.

Big Sur, if you've never been, isn't a town. It's a valley of coastal redwoods, pine and oak, ferns, clover, grass and wildflowers. It's a river, driftwood beaches, cliffs, surf, seals and green green sea. Highway 1, a tenuous tethering of San Francisco and Los Angeles, winds two lanes through Big Sur country. Compared to either of those cities, Big Sur is a place of welcome quiet, broken only by the occasional gunning of motorcycles heading toward the "bikers welcome" bar, or the liberated acceleration of cars that have managed to overtake an RV they've been trapped behind for miles.

Although Big Sur now has the gas stations, restaurants and general stores the writer Henry Miller in "Big Sur and the Oranges of Hieronymus Bosch" hoped would never come, the "odious claptrap that makes Suburbia horrendous," this section of the Carmel-San Simeon Highway has somehow managed to contain these suburban horrors. They're few and far between, clad in darkening wood, overshadowed by trees. Homes are nowhere to be seen, hidden up dirt roads with forbidding signs. Slow growth among old growth. Recent landslides north and south of Big Sur have necessitated nighttime road closures, spreading a blanket of stillness impenetrable from outside. No sound but night birds and frogs, no movement but the soft slow brush of a local's homeward-bound pickup truck traveling alongside the gurgle of the Big Sur River -- most nights.

At some hour past midnight, I was startled awake by two empty-all sighs from a deeply pleasured woman, followed by unbelievably annoying male laughter. If you've ever tried to slumber to the unsolicited sounds of sex, you'll recognize the path that winds through surprise, amusement and arousal to finally dead-end at annoyance. Sex, real and not your own, is a scenery-whoring RV holding you up and blocking your view. There may be worse sounds to hear from next door -- machinery, late-night TV sports commentary -- but these at least carry a certain mumbling rhythm. The sex I can attest to lacked a white-noise quality, with an air of disingenuousness that made me suspicious.

A hazy thought: What stokes the libido when we're in motel beds? What could possibly put one in the wanting mood after hours of driving, and moments after taking the key from a 60-year-old Pakistani who, while you envision the queen-size spread, is returning to his dinner just behind the beaded doorway from where he emerged? Is it the single room, dominated by an unavoidable bed, a space where the only options are sleep or sex? In the case of this Big Sur motel, yes. I'd been happy to hear it was free of a TV, radio, alarm clock and phone, but little did I contemplate how motel asceticism, by limiting the choice of possible acts, pours more gusto into those that remain.

I'll admit, my girlfriend and I too felt the draw of our motel bed and succumbed. You've felt the draw of motel beds, too, I'm sure. But not like our neighbors. After the woman's orgasm and the man's laughter fell a peaceful lull, which I mistook at the time for completion. Were they, at this late hour, perhaps doing a little post-coital reading of a local author? I heard a male groan of pleasure from the other room. So they weren't reading.

While it's true I have excellent hearing -- as a kid I could tell you which neighbors had their TVs on by detecting a unit's high-frequency whine -- the sounds that came through the motel wall were at volumes that preclude any kind of aural voyeurism on my part. This was loud, through-the-walls, openly broadcast sex. If the motel had TVs, I'd have easily mistaken the noise next door for a hearing-impaired porn aficionado watching a flick. I waited to hear a squeaking mattress, but not a spring seemed to move. A few words slipped through the wall, along with what inexplicably sounded like xylophone music, creating a confusing picture as to what was transpiring. The man groaned with pleasure, then laughed, in such a quick exchange that the foreign reaches of lust and comedy became sudden neighbors.

After a good half-hour of groans and laughter, I began to believe there could be no fewer than two men and a woman next door. A minage ` trois, perhaps, in all sorts of complicated positions. Or -- the thought suddenly struck me as I lay there -- perhaps some low-grade motel pornography was being filmed. (The horrible music certainly fueled my theory.) I waited to catch an overlap of male groans and laughter, but failed. Then how to explain the ability to switch from high passion to bawdy laughter in mid-breath? Could both utterances be true? Equally strange, I still heard no squeaky rhythm from their mattress. I looked around my room. There was a chair, a suitcase rack, little else.

Then, with great buildup and heart-stopping, thought-piercing volume, our male neighbor reached his goal. Judging from the duration, another record was in the making. Five seconds became 10, then 15, approaching 20 and continuing. (Though I'm by no means a medical expert, I would hazard that an orgasm as long as his ecstatic groans purported would have to be, at the least, dehydrating.) Then he laughed, like he'd been giddy with Elmer Fudd delight all along, muted only temporarily by his being pleasured. "It's hot in here!" he shouted, opening a window, one he unfortunately forgot to shut again. More words slipped through the wall. Something involving distance and necessitating towels. He laughed again.

Unlike other trysts I've overheard, this motel Don Juan was porn-loud, exuberant and oh so lengthy. The woman's groans came across as suspiciously sympathetic. His overtook hers and drowned them. Here's a phrase I never imagined I'd find the occasion to write: His ejaculation woke my girlfriend. Doubtless every motel occupant along this bend of Highway 1 was also roused and rustled by his cry of pleasure, one lasting so long it seemed to slip into the realms of pain, tailing off like some wincing dog. Even forgetting the distinction between complete and partial privacy, there remains a line between giving oneself wholly to the passions of the moment, and falsifying that passion. The intensity and volume of his groaning seemed a parody of a porn movie. Perhaps there really was an amateur video being shot, to be duplicated en masse and sold on eBay (where I've heard that some men pay rent solely by selling their girlfriend's underwear). If so, and if you're into pornography, look for an older woman and a younger man (remember the laughing) in a spartan motel room. I'm the silence behind the music and high-decibel high jinks, there behind that wall of bad art prints, behind that headboard, desiring sleep. I can guess the title: Big Sir's Giant Redwood.

After another short lull, the groaning continued. By this time, the loud sex, the horrid xylophone music and the ricocheting laughter had left me dead-ended at annoyance. My mind wandered. What could bring on such loud, voluminous lovemaking? Was it the scale of the West Coast, the edge of the modern world where everything is big: the ocean, the redwoods, the eagles and turkey vultures, the whales offshore, the food servings and the RVs? Maybe this couple had hiked up to Pfeiffer Falls under towering trees hundreds of feet high, or down to the beach to watch the waves crash along the deadly rocks. Could the scale of the West explain the loud, nonstop sex at what was now 2:30 a.m.? But these natural things were real and fearsome entities, while the continuing sex act seemed so much like it was held up between two mirrors, endlessly repeating and imitating itself and losing all genuine intimacy. Casanova came yet again, louder than before, though perhaps that was because he'd kept the window open. And again, that laughter. I lay in my own bed for a long time, listening involuntarily, making the most of a rare occasion to compare one's own lovemaking -- not to passion on television or a movie, not to an adult movie or to past acts -- but to another couple the next room over. All I could deduce was the knowledge that if I were responsible for the xylophone music and that laughter, I would be spending my nights sleeping alone.

My girlfriend and I woke late the next morning, not knowing when we'd eventually fallen asleep, nor how long the escapades next door continued after we reclaimed sleep. Ahead of us lay plans: a hearty breakfast down by the Big Sur River, then horseback riding down to Andrew Molero Beach, where the river winds through open grasslands before emptying into the swells of the Pacific. Perhaps there would be time afterward for a tour of the Point Sur lighthouse, which has helped to guide ships past this stretch of submerged rocks, heavy fog and completely unforgiving coast. Heading from our room, we passed motel guests who'd also undoubtedly heard the night's soundtrack. But I began to suspect that because of last night's sheer decibel volume, my girlfriend and I were being eyed as the culprits, mistakenly triangulated as the source of so much unabashedly loud sex. A tall, dark woman gave me a tight compression of a grin, and the eye -- a nudge-nudge, wink-wink of a stare that confirmed I had taken on a mistaken identity. Though she didn't utter a word, she spoke with her eyes, saying: We heard you last night. What are you packing underneath there, lover boy?

My girlfriend claims to have an excellent ability to spot if someone is gay, and at breakfast, pegged our neighbor as such. His overcompensating in the act with a woman, and his ability to quickly traverse the wide emotional gap between deep sexual emotion and flippant laughter -- a sign of inherent nervousness, perhaps -- adds credence to her hunch. But I'm not so certain. I want there to be a reason, something tied up to this last edge of the West, while it could be nothing but too many drinks and a woman who got his mojo working, again and again and again. Maybe a combination of all these things was responsible: that when you're in a place as grand as Big Sur, have downed a few drinks and have a woman that does it for you, you want to be loud. You want to affirm how great you feel, how unbelievably perfect the moment is, this moment right here, right now, getting what you want and how you want it. But then afterward, record-breaking sex in a motel room seems insignificant in a landscape that, as Jack Kerouac wrote in "Big Sur," made him "wonder why it has the reputation of being beautiful above and beyond its fearfulness." You discover that no matter how loud your pleasure is, it's but an atom's thickness in the rings of a growing redwood, a splash of foam against the rocks. You can only laugh to cover your naiveti and mask this knowledge. And then laugh some more.

Franz Jxrgen Neumann is a writer, lecturer and Web designer. He has recently completed a second novel.