My father loved me as a child

But when I became an adult, he decided that he never wanted to see me again. And he didn't. 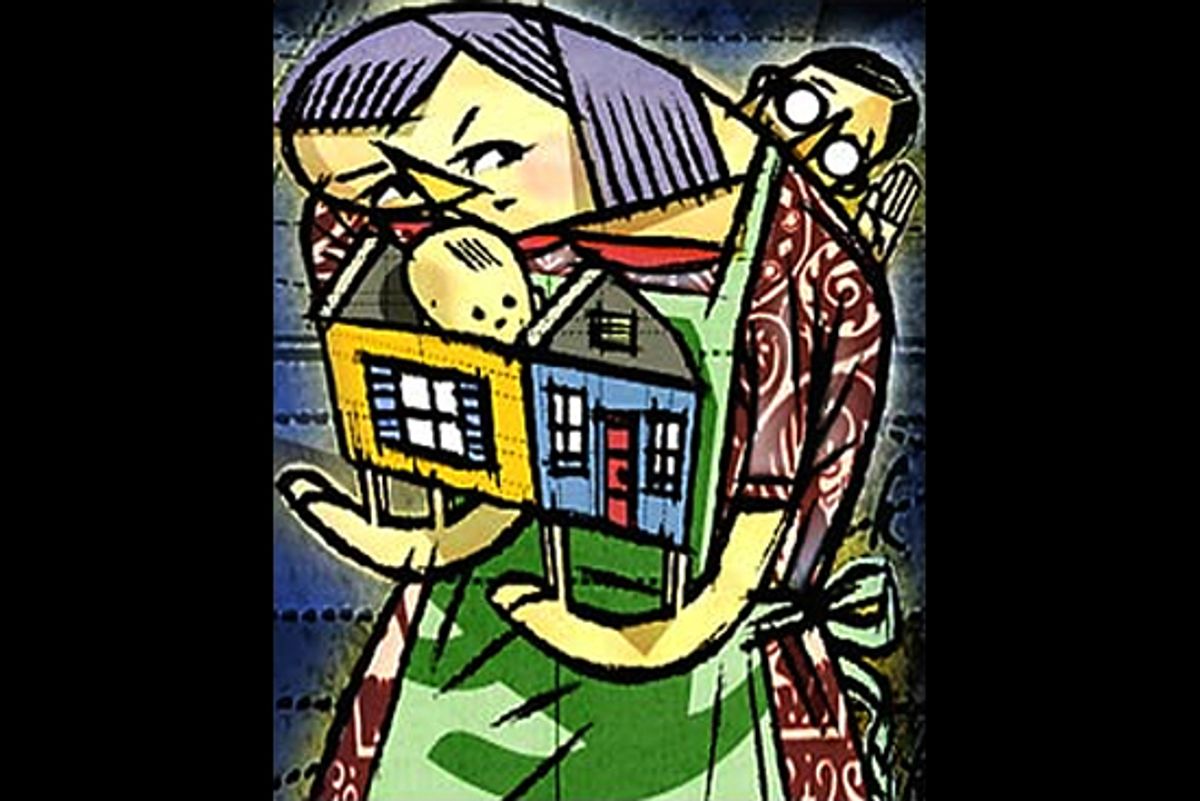 "Mom, where is your father?" He says these words so casually, my almost 9-year-old son, James. Almost an afterthought, really, a part of a conversation about something quite different. But when he utters them, my heartbeat suddenly accelerates, as if one us were in great danger. Where is my father? The truth is that I don't really know. More than a dozen years ago, he left the country and moved to Israel with his new wife, the one he married three months to the day after his divorce from my mother became final. He never told me he was leaving; he never gave me his new address.

My father's abandonment was something I learned to accept, the way I imagine one might grow to accept the amputation of a limb: an overwhelming sense of loss that gradually diminishes, though never disappears entirely. You would always look at the place where the hand had been, and even though you had learned to live without it, you would remember. The loss and the remembering would come to be a part of you, maybe even the biggest part.

So when James asked me that question, it was one for which I had been waiting. And despite the years of anticipation, I found myself without an answer. Instead, I breathed deeply and explained, in as neutral a tone as possible, that James' grandfather had been divorced from his grandmother for many years and had gone to live somewhere very far away.

"That's why we don't see him much," I finished, the words sounding lame even as I said them.

"Don't see him much?" came the frank and slightly incredulous reply. "How about never, Mom?" Well, he had a point. Never was more like it.

My father didn't abandon his family early on, before he had had the chance to bond with his children. Nor was he a cruel, indifferent or otherwise unloving parent. Quite to the contrary, my father's love and attention were the most sustaining features of my childhood. He was the sun to whom I turned for warmth, for nurturing, for validation. I was not alone in my worship: My mother and older brother felt the same way.

My memories of him are still vivid: I am 4, giddy and wet as he holds me aloft above the briny waves at New York's Brighton Beach. No harm can possibly come to me when I am in his arms. He turns my hairbrush into a microphone, through which we air our pretend radio programs -- I am Mary Sunshine, the show's star. The year I am 9, he reads aloud to my class from his recent book of poems, beguiling my classmates and teacher alike with his eloquence, his disarming and low-key charm. He walks 12 blocks to buy my favorite ice cream -- Louis Sherry pistachio. He takes me to the secondhand-book stores he loves and stops to point out an interesting gargoyle or cornice during one of our many walks.

Later, there are forays into Manhattan: to the Museum of Natural History, where we gaze at the huge slice of a redwood tree mounted on the wall, and to the old Hayden Planetarium. We visit art house cinemas, like the Thalia and the Elgin, where they show movies that awe me with their adult, European sophistication. And always, wherever we go, whatever we do, there is the gentle, respectful regard with which he speaks to me and, even more, with which he listens. How well he listens. He makes me feel that I am some extraordinary person, with whom he would choose to share his time even if I were not his child.

But every Eden has its expulsion. Mine came when I turned 16, and my parents told me that they were planning to get divorced. All the anger and bitterness my father must have felt toward my mother began to seep into and then flood the relationship he had with me. If I had been the child who could do no wrong, I now was the teenager who could do nothing right.

He moved out, refused to let me visit him, would not call our home for fear of having to speak to my mother -- his wife of 24 years -- on the telephone. When I told him I had applied to Vassar, he mocked what he deemed my bourgeois attachment to status.

Soon after, he met me for lunch at a coffee shop in the city, and while flipping through the plastic-coated menu, he said that he wanted me to buy his meal, adding, "I'm tired of paying for you all the time." When I pointed out that I didn't have enough money for two lunches, he said that I should just pay for his.

"You can eat when you get to your mother's." He ate a cheeseburger, fries and coleslaw while I watched, sipping the ice water that had been brought to me by the puzzled waitress and fiddling with the packs of sugar in their wire holder.

To say that I was shocked by his new attitude toward me is an understatement. But I didn't react immediately. Instead, I spent the summer after he moved out in a kind of anesthetized state. I worked for a telephone solicitation company where it was my job to call directory information in places such as Cut and Shoot, Texas, and Bucksnort, Tenn., and request phone numbers for potential customers. It was soothingly dull and I spent my days poring over the pages of Glamour magazine, fantasizing about the clothes I would buy before heading off for college in the fall. College was my ticket out; I would leave my family behind and reinvent myself.

Weeks after I arrived at Vassar, I fell head over heels in love with a junior, only to find out after the blissful night I spent in his arms that he actually preferred another girl, a friend I had introduced him to who happened to live on the same floor I did. Watching him slip in and out of her room at all hours proved to be more than I could take, and I had a minor breakdown of sorts: I cried uncontrollably and engaged in such quasi self-destructive behavior as taking a midnight dip in the fetid pond at the perimeter of the campus, wandering around without a coat when the weather turned raw and ultimately swallowing a bottle of over-the-counter sleeping pills.

Apparently I did not wish to actually end my life -- almost immediately after swallowing the pills, I told someone what I had done. I spent the next hour or so in the infirmary, vomiting in a metal basin while a comforting, middle-aged nurse held my head and asked why a nice girl like me had done such a silly thing. I couldn't tell her that I was mourning my father, because I didn't know it at the time.

Sometime during my freshman year, my father reluctantly agreed to visit me at Vassar. He remained aloof, unimpressed by the 100-year-old trees, the plush, green lawns, the dignified, 19th century buildings. He spent most of the time holding hands with his new, young wife and ignored me. When they climbed in the taxi that was to take them to the train station, I stood back and waved. They didn't see me; they were kissing, passionately, in the back seat.

That was perhaps the lowest point of our relationship. And although, some years later, our relationship improved enough for him to attend my wedding, my father remained edgy, tense and suspicious in my presence. He would not ever let down his guard, though I never knew just what it was that he was guarding so fiercely against. So when I learned, through old friends of my parents, that he had gone to Israel, I was saddened but not shocked. After all, he had already abandoned me years before.

Not that I didn't try to understand what had happened to him, to us. I puzzled over it endlessly. There were two ways I could understand his sudden and radical defection: Either I had committed some crime, something unspeakable for which he was justly punishing me by withdrawing his love, or else I had been fooled into thinking that he loved me, and what I had treasured as true coin was only counterfeit. This was by far the more unsettling of the options. If I had sinned, there was at least the remote promise of expiation and forgiveness. But that I might have been, in effect, hoodwinked -- extravagantly, royally, completely -- into thinking he loved me made me doubt my ability to distinguish, ever again, love from its score of glib impostors.

My memories of him, sacred as they are to me, are hardly remarkable. Rather, they are no more than the ordinary, precious ties that bind a child to her father. But now that I am someone's mother, I see that such ties are reciprocal. The dozen or more pet names, the bedtime stories, the kiss planted in the palm of the hand to be saved for later -- all these things bind you to your child. Only now can I understand the magnitude of what my father gave up when he gave up on me.

Sometimes I find myself watching my children -- James, 2 years old, squatting in our small Brooklyn, N.Y., yard and crowing up to me, "Look at that bug!" or Kate, gravely bedecking herself with a dozen glinting plastic necklaces, armloads of bracelets, a plastic tiara and a pair of sunglasses whose lenses are shaped like stars -- and I think, "I will remember this about you when you are grown and gone."

How can someone abandon the children that they have reared and loved? For me, there will never be an answer. I look at James and Kate, for whom this kind of abandonment is, I pray, not even imaginable. How will I tell them this story? And when? My son has already begun to ask, and though the conversation has ended for the moment, I know he will return to it. While I have no wish to burden them, I do not want to lie. Not about this, for my father's absence has shaped me in some unalterable way. That will mean something -- though I cannot yet say what -- to my children. For now, I glide uneasily back and forth between the daughter I was and the mother I am, trying, as best I can, to span the chasm.

Yona Zeldis McDonough is the editor of "The Barbie Chronicles: A Living Doll Turns Forty," forthcoming from Touchstone Books, and author of several children's books. She lives in Brooklyn with her family.