Gore to voters: It's the economy, stupids!

Trailing in the polls, the vice president basks in our "prosperity" while promising more. 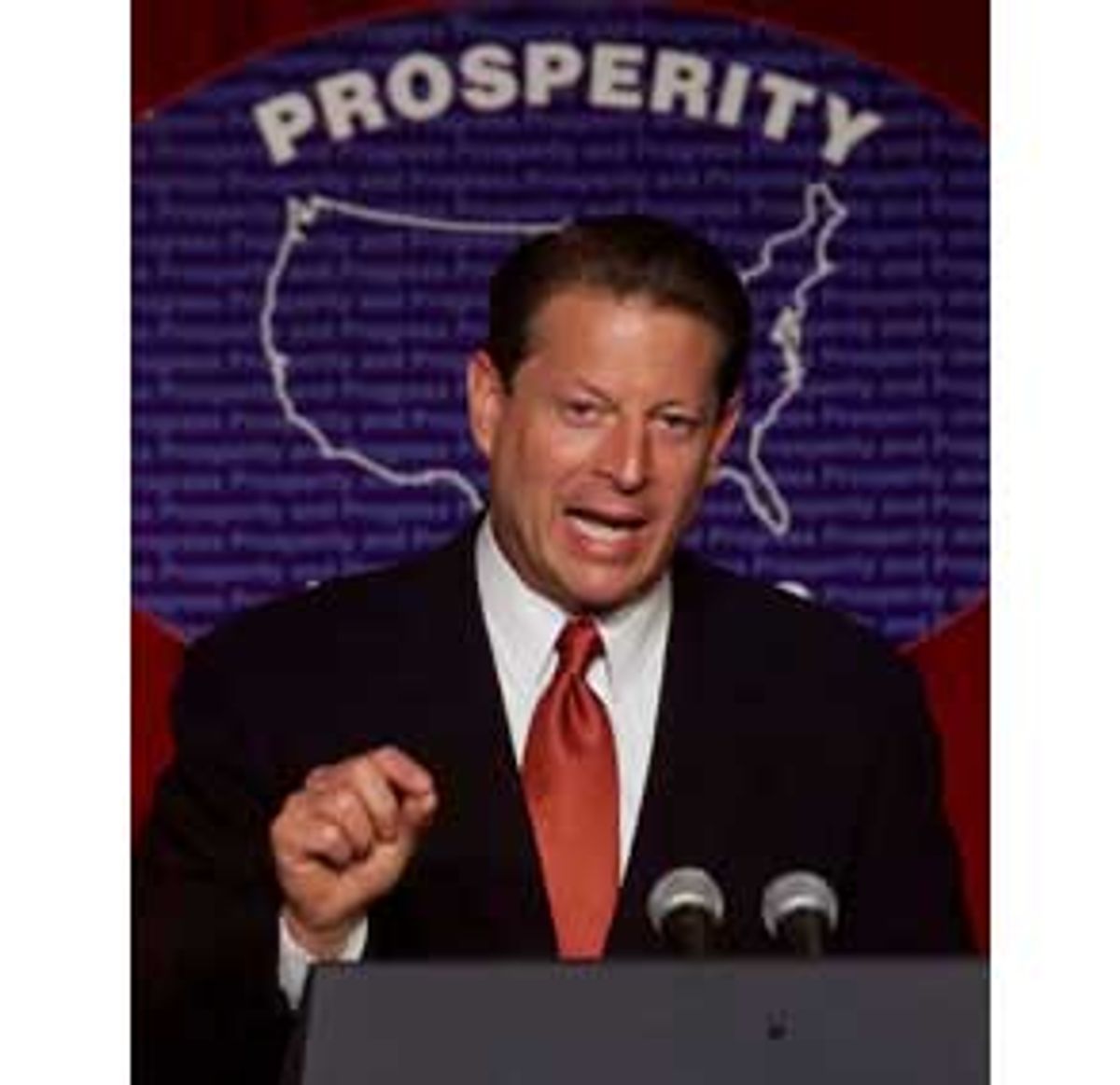 If Vice President Al Gore could bronze beloved former Treasury Secretary Bob Rubin and hang him like a mezuza around his neck, he probably would, and you could hardly blame him. In case you haven't read the papers lately, the U.S. economy is in pretty good shape -- especially compared with the last time a guy named Bush was in the White House.

On Tuesday afternoon at the New York Historical Society on the Upper West Side of Manhattan, the vice president strode out with Rubin to remind voters that he had something to do with the state of the economy. Rubin -- former CEO of investment firm Goldman Sachs & Company, former head of the Clinton administration's National Economic Council and Treasury secretary for four and a half years -- did his part to vouch for him.

"The vice president was deeply involved in every major economic decision we made," he assured the Democratic crowd in his introduction, saying Gore was a major proponent of the 1993 deficit-reduction package -- even casting the tiebreaking vote for the bill in the Senate. Rubin argued that Gore's advocacy for fiscal discipline, free-trade initiatives such as NAFTA and GATT and measures that "invest in our people" steered the country on the "right path."

"The question now before us," Rubin asked, "is whether we want to keep moving forward with the strategy that worked so well --"

"YES!" a woman in the audience cried, prompting cheers and laughter.

"You need to travel around with the vice president," Rubin quipped. For whatever reason, polls indicate that the vice president doesn't get much credit for our economic well-being, at least not as much as he would like.

Recent polls still have him trailing Texas Gov. George W. Bush, and a Bloomberg poll from May 25 to June 4 indicated voters think Bush would do a better job with the economy as president than Gore, by a 42 percent to 39 percent margin. The difference is within the margin of error, but the fact that Bush is even competitive on this issue is surprising. And it was the reason for today's speech, as well as the veep's three-day "prosperity and progress" tour from New York to Scranton, Penn., and Cincinnati, Ohio.

Without mentioning the word "Bush," both Rubin and Gore attempted today to sell Gore as the better steward to continue the progress made since Bush's dad was expressing surprise at the marvels of supermarket scanners while Rome burned and the economy crumbled. Rubin continued to hammer home the idea that Gore was the candidate of "sound and sensible" fiscal policies.

"America needs a president who understands the economic realities of this complex age," Rubin said in what sure sounded like a dig at the acuity of a certain other potential president. "Support for Al Gore is support for sound, sensible economic policy," Rubin said, as if Gore was just the sum of a pile of well-researched masters of economic policy dissertations. (Now that you mention it ...)

"Two decades ago, in the days before his election, Ronald Reagan asked a justly famous question that deserves to be asked again today," Gore said. "'Are you better off than you were four years ago?'"

"Let me go even further," Gore continued. "Are you better off than you were eight years ago?"

And there is a lot for the Clinton-Gore administration to crow about. In 1992, the deficit was a record-breaking $290 billion; in 1999 the tables were turned with a record-breaking budget surplus. President George Bush's tenure brought the creation of only 2.5 million jobs, almost half of which were in the public sector; the economy under the seven-plus years of the Clinton administration rang in an unprecedented 22 million new jobs, 92 percent of which were in the private sector. Wages are rising, home ownership is the highest it's ever been, inflation is down (from 4.7 percent under Bush to 1.9 percent today -- the lowest core rate since 1965) and unemployment is now down to 4 percent, the lowest rate in 30 years.

And, Gore noted with a smile, "believe it or not, I am here to give you still more good news: We're all learning that the estimates of America's budget surpluses, already the highest ever, are expected to rise again -- dramatically -- in the coming weeks."

"None of this boom happened by accident," Gore said, laying out the dominoes he feels were put into effect by the controversial 1993 deficit reduction package: "fiscal discipline gave us lower interest rates" which "sparked more investment, more jobs and more growth."

But crowing about the past won't be enough, and Gore outlined Tuesday a plan that continues the economic principles Rubin laid out in his introduction -- paying down the debt and maintaining balanced budgets -- while also setting new goals. These include "locking off" Medicare funds so its surpluses can't be used for any other program; introducing "Social Security Plus" accounts so seniors can invest and save money in addition to their guaranteed government checks; and eliminating the national debt by 2012.

Gore also wants to establish special accounts focused on the Democratic mantra: education, health care and the environment. These are: an "Education, Training and Children's Trust Fund" for new and better-trained teachers, child care and after-school programs; a "Health Care Trust Fund," which will add a prescription drug benefit while also allowing Americans between the ages of 55 to 65 to buy into Medicare; and a "National Energy Security and Environmental Trust Fund," which would provide grants for researchers to find cleaner methods of transportation, electric power and industrial production.

Gore didn't outline how he would pay for the programs he outlined today -- he said he would address "the specifics on my proposals and plans" in the next three weeks, and only after the new budget surplus numbers are confirmed. This aroused the wrath of legendary New York Newsday columnist Jimmy Breslin, who confronted Rubin after the speech.

Rubin said he would demur and "let the vice president provide the specifics."

Where's it gonna come from? Breslin asked. "The aiyah?" (The air.) Rubin said that he "would remind you that we have very large surpluses."

"That's, ahhhhh, you know," Breslin said. "What if the horse runs fourth five years from now?"

"That's the point," Rubin said. "Life is uncertain." Which is why the country needs Gore's "fiscally prudent program."

"If he's gonna propose it now, why don't he have it in the bank?" Breslin asked.

But Gore is seen by many as the more legitimate fiscal conservative in the race, believe it or not. This is because Bush has proposed a massive, $483 billion tax cut over five years (or $2 trillion over 10, as Gore likes to say). As Arizona Sen. John McCain, R-Ariz., was nice enough to point out during the GOP primaries, 60 percent of the cash in Bush's tax cut goes to the richest two percent of Americans.

Then, on top of all that, Bush has proposed a Social Security partial-privatization plan, which would cost nearly a trillion dollars, and a Star Wars-esque missile defense plan whose costs are almost impossible to estimate, but let's just say a lot.

Bush's tax cut proposal "will completely wipe out the budget surpluses," Rubin said after the event. "There won't be anything left for any other proposals. He'll have to resort to deficit spending."

Regardless of the fiscal responsibility of his proposals, however, Bush has attempted to use Gore's reputation for puffery to belittle the administration's role in jump-starting the economy. ("They didn't invent prosperity any more than they invented the Internet," Bush said time and time again on the stump.)

"Al Gore's 'I Invented Prosperity Tour' should recognize that hardworking Americans -- not government -- deserve credit for our nation's prosperous times," Bush spokesman Ari Fleischer was quoted saying in a press release Monday. "The final destination of Al Gore's tour is Washington, D.C., because he believes it's the source of our current economic prosperity and the solution to the challenges facing the American people."

Gore made implicit slaps, too. Tucked into the body of his speech were all sorts of code words for what's at stake should Bush take over. Eliminating the national debt "is how we reach real maturity," he said, as if referring to some mysterious, less-mature individual, one possibly sitting in Kennebunkport this very minute, daydreaming about keggers at the DKE house..

And there were more blatant slap shots. His plan is "'Social Security Plus,' not 'Social Security Minus,'" he said, promising to "oppose any effort to make Social Security a gamble instead of a guarantee" -- like, for instance, with Bush's partial-privatization plan? "I am not going to let anyone take the 'security' out of Social Security."

"Here is what I will not do," Gore said halfway through his address. "I won't be profligate with your money. I won't spend money that we don't yet even have on a huge tax cut our economy can't afford, in ways that could end our prosperity and progress."

What if Bush took over and did his screwy baby-voodoo economics for one year but then realized his mistake? Gore had an answer for that, in case you were wondering: "Bad choices in a single year of a single budget could put prosperity beyond our reach again for a decade or more."

Promising he would fight for these principles, Gore concluded. "America has done well. But I'm here today to tell you: You ain't seen nothing yet." And, right on cue as with everything in Al Gore's carefully constructed, hermetically sealed world of rigidity, order and achievement, Bachman-Turner Overdrive's "You Ain't Seen Nothing Yet" began playing. Wheee!