The man who shot Charles Bukowski

In Michael Montfort's photographs, L.A.'s late poet laureate of the gutter gets bent and knocks the bejesus out of literary decorum. 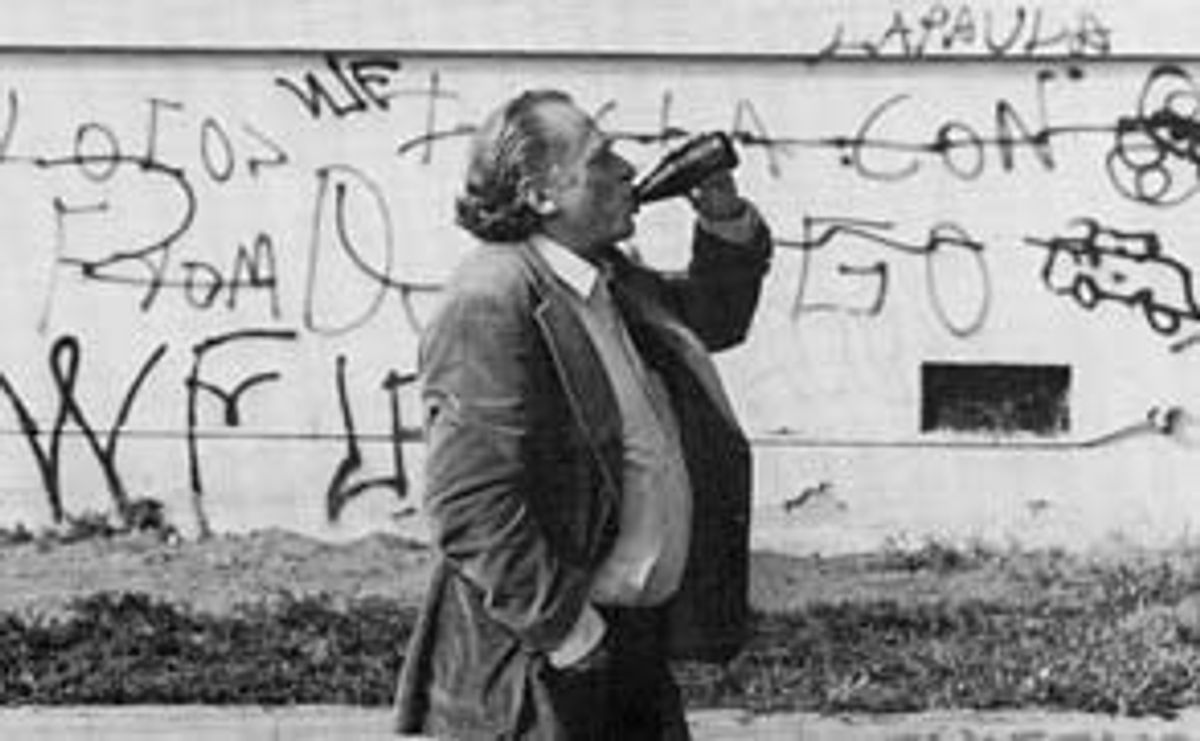 Photographer Michael Montfort sucks on a dime-store cigar with that perpetual hangdog expression of his and begs off taking a swig from the gallon jug of cheap bourbon his gallery owner has brought forth.

"Too early," he says in his German accent. "And besides, my doctor would kill me. I'm not supposed to touch the stuff."

Granted, it's only a little after 1 p.m. on a Sunday afternoon -- and the bourbon is on the low end, with a name like Kentucky Gold or some such. Still, the subject before us is Charles Bukowski, one of the many patron saints of literary dipsomania (along with Faulkner, Hemingway, Chandler and all the rest). A shot or two of rotgut ought to be just what the doctor ordered.

Montfort, 59, eyes the brown juice like he's tempted to say to hell with it and break out a straw. "No, I better not," he says, finally. "You go ahead."

No one has to tell me twice. As I baptize my tonsils in firewater, Montfort recalls the first time he met Bukowski, the poet and novelist who died in 1994 with dozens of books to his name and a rabid international following. We're sitting at a round, wooden table just outside of the Coagula Projects art gallery, in a converted brewery downtown with a mess of Montfort's Bukowski photos spread out before us.

"It was a 1977 cover story for a German literary magazine named Rogners," explains Montfort, who strangely looks a little like Bukowski, save for the glasses he has on. "That's when he was just starting to take off in Germany. I was scared shitless to meet the guy because of his image. I thought I'd never get out alive. So I brought a case of beer or wine, and that impressed him for the next 20 years."

This shrewd move on Montfort's part was the beginning of a beautiful friendship. Bukowski didn't like having his photo taken, according to Montfort, and he didn't like new faces. So when Bukowski, who was German-born, got along with this young, easygoing shutterbug from the homeland, Montfort became the official photographer of sorts for the hard-bitten American Rabelais whose legend was on the rise. It also helped that Montfort, after reading a ton of Buk's poetry, became a fan.

"All these German journalists -- television and print -- were coming over to interview him," says Montfort, describing how he became Bukowski's ambassador to the German media. "And his publisher was concerned that they would overstay and he would get drunk and stuff. So I kind of became the policeman there to stop the interviews at the proper time. Since there were always lights and cameras, I brought my cameras and took pictures also."

Indeed, whenever Bukowski or his publisher, John Martin of Black Sparrow Press, called, Montfort dropped everything to rush down to Buk's house.

As his current exhibition attests, Montfort's effort paid off. "BukShot: Photos of Charles Bukowski by Michael Montfort" is filled with intimate shots of Bukowski doing everything from clowning at a local cemetery and strolling the streets of Cologne, Germany, to hiding out at Santa Anita race track and driving his black VW Beetle around Hollywood. They're just a handful of the thousands of Buk photos Montfort has shot -- each of them capturing a bit of Bukowski's irascible, mischievous persona.

"I became so used to Michael that I often forgot about the camera," wrote Bukowski for the introduction of a limited edition printing of some of Montfort's photos. "I'm sure he has more Bukowski photographs than all the other photo-takers in the world, at least 100 times more. What he intends to do with all these photos, I have no idea."

Martin also paid tribute to Montfort's unique relationship with the author of such books as "Post Office," "Women" and "Ham on Rye."

"He's taken maybe 2,000 or 3,000 photos of Bukowski," Martin said during a phone interview. "We've used them in our books continually. Whenever we do a Bukowski book, it's usually got a picture of Bukowski by Montfort in it."

"Bukowski was close to Montfort," he adds. "Whatever Montfort needed or wanted, he would go along with."

This included allowing Montfort to accompany him on his triumphant 1978 trip to Hamburg, Germany, for a reading at the Markthall. The event drew a capacity crowd of 1,200, with 300 turned away at the door (far exceeding the 300 G|nter Grass had pulled in during the same time). With his future wife, Linda Lee Beighle, by his side, Bukowski also visited Andernach, the town where he was born in 1920, and his only surviving German relative, Uncle Heinrich, age 85, who lived there at the time.

Montfort's photos of the journey, along with text by Bukowski, became the 1979 book "Shakespeare Never Did This," a must-have for all Bukowski buffs. Some of the photos from that book are in the current exhibit, like one of Buk wrapped in a blanket at a mosque in Schwetzingen, Germany, and a proof sheet of Bukowski smoking, which gives the viewer the virtual experience of sitting down for a drink with the barroom bard.

Montfort and Bukowski collaborated on several other projects, such as the 1982 folio "Horsemeat," which documented Bukowski during a two-day stint at Santa Anita, and the 1986 book "The Wedding," which recorded Bukowski's 1985 marriage to Beighle.

Certainly Montfort's empathy with Bukowski's lowlife poetry of concrete and cigarettes guided his keen observations of this literary rara avis. But Montfort's quick to remind you that it wasn't all tea and crumpets.

"He was an immensely private person," says Montfort. "He didn't want to be bothered, he didn't want to meet new people -- he just wanted to go to the track and go home at night to write. If I'd had the nerve, I would have bothered him a lot more. Maybe I should have. But I respected his privacy."

Even to his friends, Bukowski could be a right bastard when he got tanked.

"He could get nasty and loud," says Montfort. "There were some weird instances, too. Once, in his old apartment on Carlton Way in Los Angeles, my ex-wife and I were visiting. His girlfriend was there and we were all drinking. I had a conversation going on with her, when he got up to go to the bathroom. She went into the kitchen to fix something, and so I followed her."

"Bukowski comes back from the bathroom and immediately accuses me of having sex with his girl in the kitchen. While my wife is sitting in the living room! I think it took a year to get that off his mind."

Montfort's got a million of them -- like the time Bukowski was thrown out of the Beverly Hills Hotel for threatening the cook with his penknife or the one where Buk, at Montfort's wedding to his second wife, got pissed because someone parked too close to his BMW and proceeded to ram his car repeatedly into a brick wall. But the best is the one where a great German actor came to visit.

"While everyone was busy setting up the lights, he was sitting with this actor," recalls Montfort. "The actor was asking him about the Iron Cross that was once hanging on the mirror of his VW Beetle. That was the only present that his beloved grandfather ever gave him -- ever could give him -- because he was dirt poor, his Iron Cross from World War II.

"So this actor somehow, I don't know all the details, accused him of being a Nazi because he was driving around with this Iron Cross. Bukowski stretched his hand out to this guy, and apparently the German actor thinks this is a goodwill sign and gives him his hand. Bukowski pulls his hand over, spits in it, folds it and gives it back to him. The German actor was so pissed, he was sitting outside the house in San Pedro for the rest of the night" and wouldn't come back in to talk with Bukowski.

Montfort points out that though Bukowski was erratic and abusive when he drank, he was never dangerously violent. The only fistfights Montfort was aware of were in Bukowski's past -- part of the legend enshrined in his poems and novels.

"He was a very shy man, actually," says Montfort. "His drinking was part insecurity when he had to deal with strangers. It may also have been part of an act. Maybe he thought people expected the wild, drinking man. Otherwise, he was a very wise, kind, considerate human being. I wish I were so wise."

Viewing Montfort's photos, you get a taste of why Bukowski was such a colossal talent. Even in the posed shots, there's something uncompromising, raw and authentic about the way he looks that is mirrored in his writings.

"Being photographed does not make a man a good writer," Bukowski wrote. "It does not make him anything." Perhaps, but would it be too bold to suggest that there might be something about a great writer that carries over into photographs of him?

Call to mind a pantheon of giants such as Malcolm Lowry, Carson McCullers, Louis-Ferdinand Celine, Paul Bowles and William S. Burroughs. There's something fascinating about photos of them -- aside from who they were -- something in their physiognomy that indicates their imaginative and intellectual power.

Conversely, the mediocre look mediocre, and there's nothing to be done about it. Check out our reigning literary lights: Joyce Carol Oates looks like a schoolmarm; Reynolds Price looks like he should be teaching Sunday school; and T.C. Boyle, like a hopelessly constipated English prof.

"I think he was a giant," Montfort says of his lost friend. "And his influence is very underestimated, if you judge by the book reviews in the Sunday papers. The establishment always hated him. But he didn't give a shit, and I think he was right not to give a shit."