The war on information

Congressional anti-drug legislation could make it illegal to give life-saving advice about ecstasy. 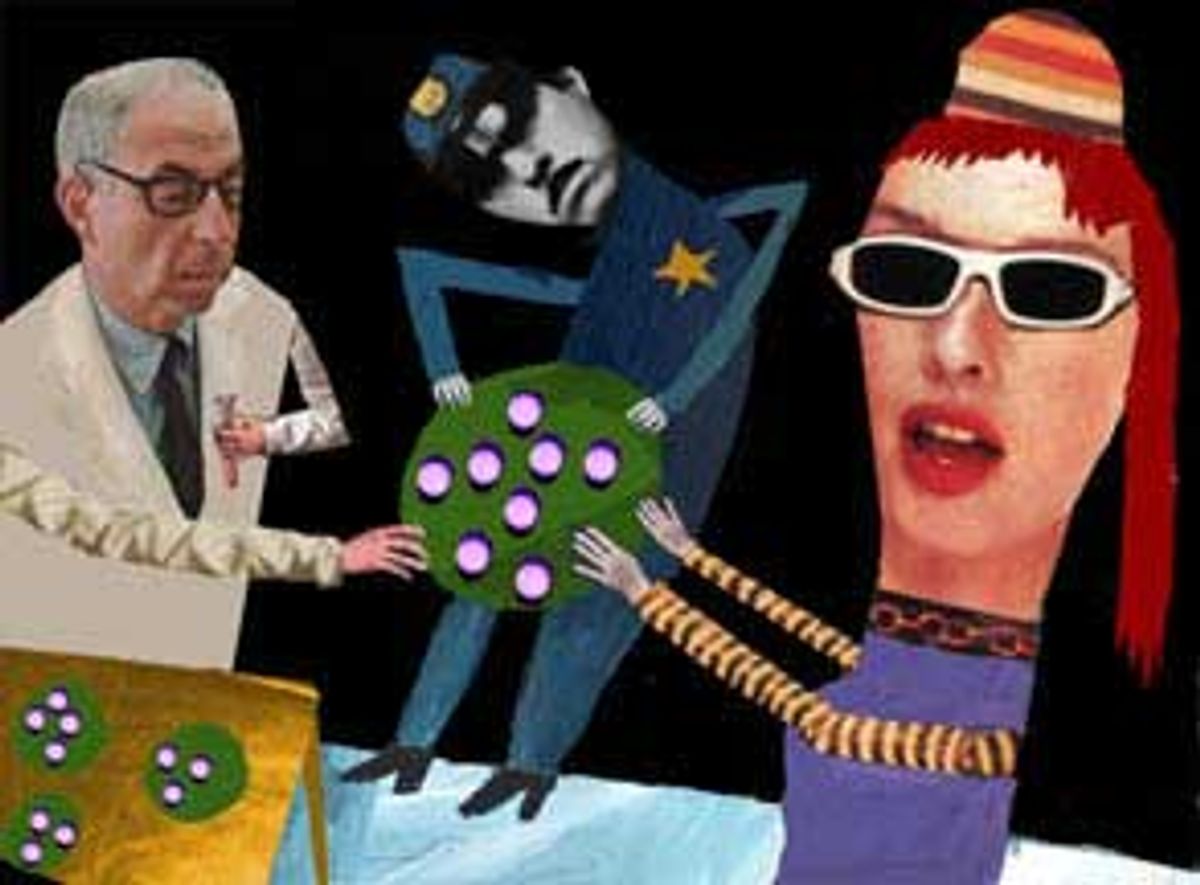 It's a balmy Saturday evening on Randall's Island, where 8,000 people are attending the Sixth Element Electronic Music Festival, a rave-style event showcasing DJs from around the world.

In a back corner of the grounds is a small folding table behind a banner that says "DanceSafe." Several young people are peering intently into a small cardboard box, where Soren Roinick, a 23-year-old DanceSafe volunteer, is testing ravers' pills for MDMA, the only ingredient in pure ecstasy.

Three of the 68 pills DanceSafe will test this day contain DXM, a drug sometimes sold as ecstasy that has been responsible for some recent injuries to ravers. Roinick tells the pill holders at the table that DXM is not ecstasy, and, when mixed with MDMA, can lead to severe overheating. Two people say they would not take the DXM because they are already on E. Another guy says he will take it later, after his ecstasy wears off. On a humid 95-degree day, that bit of advice may have saved a couple of trips to the hospital.

In an attempt to stem the growing popularity of a drug taken mainly by young, affluent, white people, Sen. Bob Graham, D-Fla., recently introduced the "Ecstasy Anti-Proliferation Act of 2000." The bill would stiffen legal penalties for ecstasy dealers. But much of the language is aimed at controlling information about the drug. An aide to Graham said the main targets are Web sites that extol its virtues and announce the raves where people can buy it.

But the bill goes beyond even this questionable assault on free speech. It would ban the teaching, demonstration or distribution of information about ecstasy or any other drug defined as illicit -- marijuana, cocaine, LSD, even Valium used without a prescription -- if the people distributing that information know that someone will commit a crime based on what he has learned. Naturally, this alarms DanceSafe founder Emanuel Sferios, whose organization does exactly that.

"Banning lifesaving information is going to jeopardize the health and lives of young people," he says. "Politicians want to appear tough on drugs, so they come up with this bill. But it's only going to exacerbate the problem. It should be called the Club-Drug Harm Maximization Act."

At a press conference in May to announce the bill, Graham said, "Ecstasy is a proven killer -- and it is on the loose. We need to shatter the dangerous myth that this risky designer drug is safe for consumption." The bill would provide funding to "educate young people on the negative effects of ecstasy," and would order the head of every federal agency to post "anti-drug messages" on their Web sites.

A nearly identical bill will be discussed in the House Judiciary Subcommittee on Crime on Thursday. Perfect timing: On Wednesday, the U.S. Customs Service announced that it had busted an international ring that allegedly smuggled roughly 9 million tablets of ecstasy to the United States -- the largest trafficking syndicate Customs claims to have cracked. Since April, 25 people have been arrested in connection with the group. The House bill is sponsored by Rep. Judy Biggert, R-Ill. In a press release, Biggert says she was moved to introduce the bill after a high school student from her district "died after ingesting what she thought was ecstasy, but was actually PMA." (Paramethoxyamphetamine is another, more toxic amphetamine.)

Of course, this is the sort of tragedy that pill testing tries to prevent, but the bill shows no recognition of this. A spokesman for Biggert says a legal analysis by the Congressional Research Service concluded that DanceSafe would only be "tangentially targeted under this law because what they are doing probably already constitutes a felony offense."

But Eric Sterling, who served eight years as the counsel to the House Judiciary Subcomittee on Crime and is now the president of the Criminal Justice Policy Foundation, which advocates drug law reform, has a different view. "This bill is designed to chill any discussion of drugs that is contrary to the government line," he says. "Fear of felony prosecution in the drug arena is an enormously heavy blanket. Small programs like DanceSafe run the risk of being destroyed."

Founded in February 1999 by Sferios, 30, DanceSafe is part of the "harm reduction" movement in the United States. Other such organizations, including the Harm Reduction Coalition and the Lindesmith Center, advocate a shift in national drug policy to view the issue of illegal drug use as a matter of public health, rather than law enforcement. People are going to use drugs anyway, the reasoning goes. Sferios says it's especially important to serve the dance community. "All drug use has inherent risk, and dance drugs in particular pose certain risks, which are increased by the lack of information," he says.

The anti-ecstasy bill, say civil libertarians and reduction advocates, could easily be used against programs like DanceSafe. "When you prohibit information about use, you are targeting people involved in harm reduction," says Rachel King, legislative counsel for the American Civil Liberties Union. She adds that "there are not that many people who care about the First Amendment in the context of the war on drugs."

Those prosecuted for distributing information on the use of E and other club drugs would face a maximum prison sentence of 10 years along with fines.

"I dont think its unreasonable for politicians to be worried," says Mark Kleiman, a professor of policy studies at UCLA. He points to studies from England showing that frequent weekend users of ecstasy are depressed by midweek, every week. "But passing a law thats grossly unconstitutional is a different question," he says.

He has no doubt that if the legislation becomes law, the courts will throw it out. This, he says, is "part of a childish cycle the legislature has set up where the courts are the only ones left to defend the Constitution. They can vote for this knowing its going to get thrown out, but then they get to go home and tell their constituents that theyre doing something about drugs."

There is no good research on the effectiveness of harm-reduction efforts. But there is solid evidence that the official approach to drug information has done nothing to stop drug use. Marijuana use among high school students nearly doubled from 1991 to 1999, according to the Centers for Disease Control -- years when the "just say no" slogan made famous by Nancy Reagan became the cornerstone of school-based drug education. Use of cocaine more than doubled in the same period.

"All of our research has shown that the messages so far dont work," says Joel Brown, executive director of the Center for Educational Excellence in Berkeley, Calif. Young people, he says, don't fall for scare tactics, and often turn to uninformed sources who may downplay the risks.

"You have to win people's trust," says Sferios. "If part of the overall strategy is to see the drug situation as a war, well ... the first casualty in war is the truth."

Sferios and others point to a recent example in Florida, a hotbed of rave culture, of what happens when the government tries to control information related to drugs. As reported by Henry Pierson Curtis in a May 21 Page 1 article in the Orlando Sentinel, Florida drug czar Jim McDonough, a former Army colonel, was so eager to show that his efforts against club drugs were necessary that his office grossly overstated the number of deaths caused by them. The Sentinel reviewed the autopsy reports of those supposedly killed by club drugs in Central Florida, their main coverage area. Over a three-year period, they found that at least 35 of the 60 deaths were in fact completely unrelated to ecstasy or rave culture.

Two days after the story appeared, Graham introduced the ecstasy bill. DanceSafe is reviewing the Florida autopsy reports, and will publish its own conclusions.

A therapeutic dose (2mg/kg of body weight) of MDMA will flood the synapses of brain cells with nearly the entire supply of the brain's serotonin, and prevents it from being naturally recycled so it lingers longer. Serotonin is a neurotransmitter known to play an important role in determining a person's mood and regulation of body temperature. MDMA also triggers the release of dopamine and norepinephrine, which increase the feeling of energy. The three- to five-hour effect is usually one of seemingly boundless energy, combined with an overall heightened physical sensitivity and an increased feeling of empathy toward others. Hence the "marriage made in heaven," cited by one raver, between ecstasy and dancing in close quarters with lots of other people.

Ecstasy is most likely not without biological risks, but its effects on the brain are unclear. The most often cited studies on the neurotoxicity of MDMA are by Dr. George Ricuarte, a neurotoxicolgist at Johns Hopkins University. Ricuarte says MDMA causes damage to the ends of axons and may impair memory function. Other scientists, however, say his findings are inconclusive.

Dr. Julie Holland, a psychiatrist at Bellevue Medical Center and a psychopharmacologist in Manhattan, says Ricuarte's memory study compared multiple drug users with graduate students. "The best you could say from a study like that is that people who take a lot of drugs and go to raves don't perform as well on memory tests as grad students," Holland says.

She adds, "Nothing is conclusive about the brain and its chemistry -- the more you look, the more complicated it gets."

Her suggestion to ravers: "Use the chill-out rooms and stay cool. Drink plenty of water, but only as much as you feel you're losing. And get your pills tested."

A couple of hours before the finish of the rave on Randall's Island, an emergency medical technician, who has worked for several years at venues like Madison Square Garden and Yankee Stadium, is impressed. "It's much better than we expected," she said. "With two hours to go, we've only taken five people to the hospital, one was because of alcohol and another because he got in a fight. The other three ... we don't know what happened."

A leap of faith: The other three were probably not the three young people who decided against taking DXM pills disguised as ecstasy after having them tested by DanceSafe.

Ted Oehmke is a freelance writer in New York. He's written for the New York Times, The New Republic and Black Book Magazine.