He left me a reading list and a chaste warning about self-abuse. I devoured one, ignored the other and, eventually, became acquainted with the total literary experience. 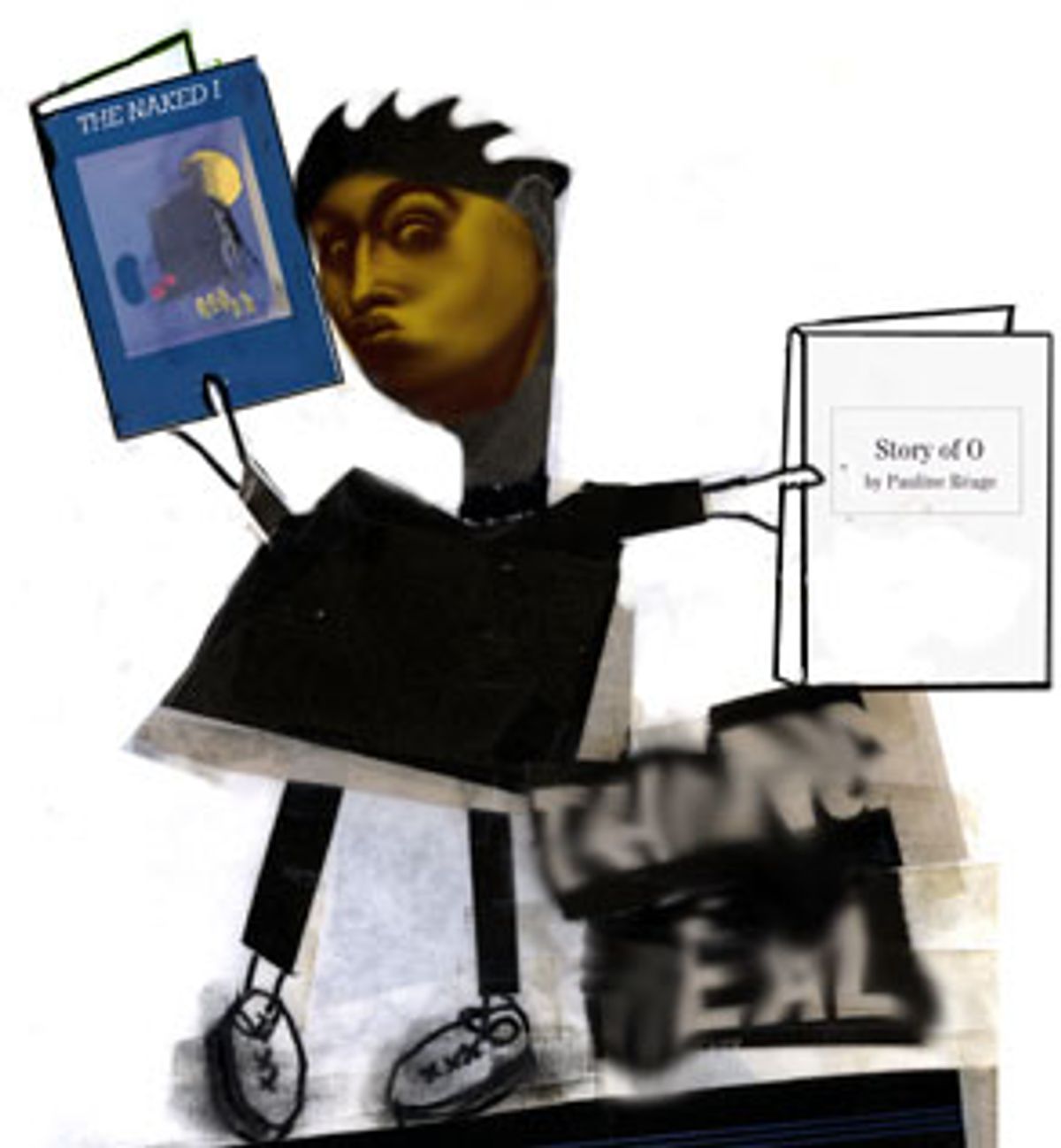 The summer before he killed himself, my father assigned me a reading list that was fairly daunting for a 12-year-old. "Catcher in the Rye" was on it, and some Frost poems, and a short history of the Civil War, and Kenneth Clark's "Civilization," which I still haven't finished. "Julius Caesar" was the highlight. The list was my initiation into the high-ceilinged sanctum of my parents' study, the grown-up world of books and ideas. Then it became my father's legacy. In despair over his paralysis from a stroke, he left the house one Monday in December and never came back.

In the months after his suicide I became obsessed by the idea that I now had to read every book in the world, because my father was no longer there to assign me some and not others. This prospect sent my head spinning. Sometimes, lying on my bed, I would become aware of my thoughts as if I were reading them in a book and then imagine (I was taking a typing class at school) my fingers hitting the keys that spelled out my ideas as I thought them.

I needed order, and it came from an unexpected place -- the list of titles on the back of the Cliffs Notes guide to "Julius Caesar," which I'd bought for advice in staging a backyard theatrical. This black-and-yellow friend of delinquent college students became my highest authority on great literature, and the number of books that had to be read suddenly dwindled to about two hundred: "Ivanhoe," for example, and "Black Like Me" (but not "Remembrance of Things Past"). I sat down and assigned myself four listed titles a month, calculating that by the age of eighteen I would have read everything worth reading.

Almost immediately I fell behind (the Aeneid was heavy going), but the list itself wasn't discredited by this failure -- only I was. My father's death had warped my relation to books -- a love affair ever since "Where the Wild Things Are," when I walked around the house for days believing I was Max -- into something systematic and compulsory. I anesthetized the part of myself that was alive to literature's capacity for shock, delight, terror. The simple telling of a story no longer held any value; now I had to master each book, which meant wrestling its theme down to a single sentence. This sentence was often buried somewhere in the text, and I would spend tormented hours digging it up -- unless it was available on the Modern Library jacket, which, for example, told me that the theme of "Crime and Punishment" is that crime is its own punishment. Once I had the theme under control, I would underline the title on the Cliffs Notes list and move on.

It was as if, by plowing through the world's great literature, I could keep the world itself at bay and stop the spinning in my head.

Ideally, reading means getting lost. The process of surrendering and then recovering the self might be the essence of growing up -- being exposed to an alien world and, instead of being broken down and destroyed, absorbing it, making it your own. But that year, the thought of losing myself was quite real and frightening. I might plunge into the depths of a book and never come back up. "If phantasies become over-luxuriant and over-powerful," Freud wrote, "the conditions are laid for an onset of neurosis or psychosis." He added, ominously, "Here a broad by-path branches off into pathology."

So I read and read, checking off titles and hoarding themes, without letting a germ enter my bloodstream.

At the same time, I was discovering an entirely different sort of literary pleasure. It had nothing to do with the rational education I was receiving at home and school, and it gave me the crucial intimation that ideas might be no match for the power of feeling. In the year of my father's death I also came up with my own secret reading list. It included "Story of O," "Lady Chatterley's Lover," and "Fanny Hill." It involved researching key passages in "Fear of Flying" and "The Godfather." The books originated, like all literature, in the study, but they ended up in the bathroom, where questions of theme never came up.

There was nothing abstract about this reading. Instead of demanding impossible feats of self-discipline, it permitted brief escape from the confines of my other, classics-mongering self. Its satisfactions were easily available and quite concrete. It presented the same, limited and always successful reading project every time. On the cover of "Story of O," a critic called the book "a total literary experience." I snickered at this piece of adult hypocrisy; my experience was something else.

In a coming-of-age letter he typed out for me the summer of the reading list, my father had suggested that if I found myself doing this "once a day, or even more," I should talk about it with him or my mother. The suggestion seemed far-fetched, and the quota low. I carried out this secret reading like a criminal, pinning "Story of O" under my shirt as I made the dangerous journey from the bathroom down the hall back to the study, where I hastily returned "Pauline Reage" into the gap on the shelf and made sure her white spine was flush with those of her more respectable neighbors, to keep her (whoever she was) from betraying me.

In the summer of 1974, my mother took my sister and me to London. London meant ground zero of great books -- half of the Cliffs Notes list came from London. But the literary experience I still remember from that summer involved neither Shakespeare nor Dickens.

My mother had a collection of contemporary short fiction called "The Naked I," in which there was a story by Robert Coover called "The Babysitter," with a good deal of metafictional fantasizing about a teenage girl. The language performed its usual magic -- too well, for one afternoon while my mother and sister were off doing something cultural, I accidentally stained the relevant pages of "The Naked I" beyond repair. The power of words to make us forget ourselves! In an instant the babysitter in the bathtub vanished, the book became printed text on a page, which I had just defiled.

Panicking, I smuggled the evidence out of the apartment in a brown paper bag and went hunting for a garbage can. Block after block, there was no garbage can. My package felt as if it was about to blow up or start wailing like an alarm. At last I spotted a Dumpster -- but it stood on the other side of a high chain-link fence. I looked up and down the street, then flung the brown-bagged book and watched with amazement and relief as it sailed over the fence and landed inside. I turned to run.

"What did you just chuck in that rubbish bin?"

A few feet away, two enormous bobbies under blue helmets were staring me down.

"What did you just chuck in that rubbish bin?"

"What book?" The bobbies looked tense and angry. As in a nightmare, their arrival made complete sense.

"A book of short stories."

"I was finished reading it."

I could see that they didn't believe a word. One of them narrowed his eyes. "How do we know it wasn't a bomb?"

This was the summer of the Cyprus crisis. The rubbish bin stood near the National Bank of Greece, which the police suspected me of trying to blow up. I swore it wasn't true, while the burning in my cheeks betrayed my real crime. Silently I resolved to spend the rest of the summer pursuing themes from the Cliffs Notes list. The bobbies had provided a perfect lesson in the danger of over-luxuriant fantasy. Mercifully, they didn't order me after the evidence, but instead let me go with a warning about not chucking things into rubbish bins and running away. I slunk back to the apartment and waited for my mother to come through the door looking for her short-story collection. But she never asked about it.

Like all splits, mine -- between words and feelings, themes and stories, reading and living -- was bound for a reckoning. It came 10 years later, on the west coast of Africa, where I'd gone with the Peace Corps to teach English to village kids. From the first days, my head started spinning just as it had after my father's death. Under the African sun, or in my room at the edge of the village, everything I once valued sounded as hollow as the hot hours in the middle of the day, when a crowing cock broke the silence like an insane herald of nothingness. As the rational world disintegrated, I turned for help to the only familiar things at hand -- my books.

I had packed them with the malaria pills and snakebite kit, and they were lined up on the cement floor under a shuttered window that looked out on a papaya tree. In the early afternoons, while the village dozed in the peaceful sleep of the ontologically whole, I searched Kierkegaard's "Sickness Unto Death" for the causes of my despair. "When the enchantment of illusion is broken, when existence begins to totter, then too does despair manifest itself as that which was at the bottom." According to Kierkegaard, I wasn't even a self -- which was why I was in despair. He explained my situation with dialectical beauty, and it made no difference.

I picked up Jung and found the archetype of the shadow, the antagonistic counter-self. "If we are able to see our own shadow and can bear knowing about it, then a small part of the problem has already been solved." I began to think that my problem lay in the period of my father's suicide -- in all that had been repressed through things like reading lists. I went back 10 years and tried to retrieve everything. But even as Jung explained the shadow, I noticed that it still rose with me every dawn, stood beside me before a classroom of African children, sat with me at night as I tuned the radio to the BBC.

I went looking for my frightened self in fiction. In Conrad I read: "How can you imagine what particular region of the first ages a man's untrammeled feet may take him into by the way of solitude -- utter solitude without a policeman -- by the way of silence -- utter silence, where no warning voice of a kind neighbor can be heard whispering of public opinion? These little things make all the great difference. When they are gone you must fall back upon your own innate strength, upon your own capacity for faithfulness." And elsewhere in Conrad (Conrad knew everything about me): "The truth was that he died from solitude, the enemy known but to few on this earth, and whom only the simplest of us are fit to withstand. The brilliant Costaguanero of the boulevards had died from solitude and want of faith in himself and others."

I read late into the night, and while the wick of my kerosene lamp burned down I entered the world of the imagination so deeply that for the first time since childhood I lost my way. Everywhere words led, down through the "Inferno," into "Heart of Darkness," at "A Bend in the River," they mastered me with their suggestive power. The themes had escaped my brain and slipped into my bloodstream. Those nights in Africa with a kerosene lamp finally acquainted me with the total literary experience, and it freed me to tell the tale.

George Packer's fourth book, "Blood of the Liberals," will be published in August.