Pat Buchanan plows through another convention -- and takes no prisoners. 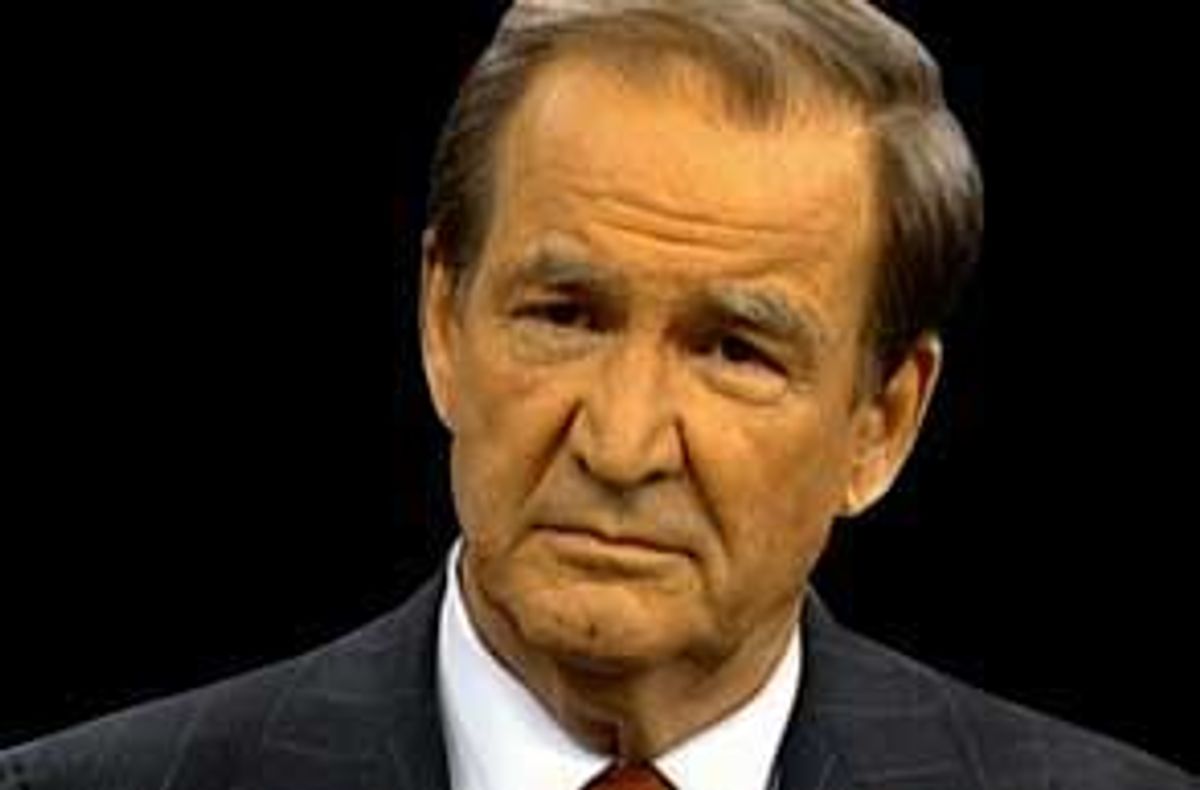 While almost every attendee at Wednesday's convention of the Reform Party of New Jersey seemed firmly in presidential candidate Pat Buchanans camp, there was one man reserving judgment: Pat DiNizio, 44, lead singer of the rock band The Smithereens and a Reform Party candidate for Senate.

"I don't necessarily believe the spin that the media's put on the things he's said," said DiNizio, who says "A Girl Like You" is probably his band's biggest hit. "I'm reserving judgment. I want to look him in the eye, shake his hand and see what the truth of the matter is."

DiNizio got his chance when, at approximately 1:20 p.m., Buchanan -- with well-coiffed wife, Shelley, and a few aides in tow -- pulled up to Raritan Community College in a shiny black Mercedes limousine to wax populist.

Buchanan's speech to the roughly 200 New Jerseyans assembled drew cheers, several standing Os and complete success in the state party elections, as every one of the 25 "Buchanan Reform"-endorsed candidates for delegate, national committee and state office won.

DiNizio and the rest of the crowd -- a hodgepodge of earnest reformers, future assassins, XYYs and audio-visual club rejects, as always -- learned the prime lesson about Buchanan: If you're able to scrape away his unsettling lapses into bigotry, he gives a hell of a speech and often even makes sense.

Part of this is clearly because the Republican and Democratic parties seem so poll-driven, focus-group-tested and beholden to the big money doled out by corporate America.

"They're two wings of the same bird of prey," Buchanan said to raucous applause. "All they're looking for is soft money."

That line was one of many in which Buchanan focused on areas where his branch of populist conservatism meshes with the Reform Party's reformist populism. Likewise, he found common cause with all in the audience on the body of his remarks, which were focused on trade policies, immigration reform, his belief that the U.S. is handing over its sovereignty to groups like the World Trade Organization, and the unfairness of the Reform Party being shut out of the presidential debates.

Buchanan told the crowd that he first realized that all was not well in the state of the GOP when, during the Iowa straw poll last summer, his speech was resoundingly applauded by the 15,000 cornfed Republican attendees. He was heartened that the audience whooped it up for his speech -- even though he "criticized not only the policies of Clinton and Gore but also the Republican establishment." But he still came in near-last, which he ascribed to the tens of millions of dollars at the disposal of Gov. George W. Bush and then-candidate publisher Steve Forbes.

"This party is a little too rich for our blood," he says he told Shelley, a former receptionist for then-Vice President Richard Nixon. The fact that the GOP cheered on trade agreements like NAFTA made the role of Big Money in his party all the more disappointing, he says.

Before his speech, Buchanan told reporters that nothing much had changed since then, as evidenced by the fact that House Minority Whip "Tom DeLay [R-Texas] was rounding up votes for Bill Clinton" on permanent normal trade relations "with Communist China."

The Republican leadership's "whole war plan is to bash Clinton on scandals ... conservatism is about a lot more than that," he said.

Like a fervent opposition to abortion, for instance -- an issue where he found Bush more than a little wanting. That Bush would consider selecting a pro-choice running mate "shows you where his heart is," Buchanan said. Bush would never, ever pick a veep nominee who wanted to lower the defense budget to $100 billion, or one who opposed the capital gains tax.

But in front of the crowd, Buchanan steered clear of the "social issues" various Reform Party old-guarders have criticized him for addressing while seeking the nomination of their party, which avoids taking a platform position on controversial subjects like abortion and gay rights.

That didn't mean Buchanan would stray away from other issues the all-white crowd was destined to lap up, like immigration -- a subject that Bush and Vice President Al Gore avoid discussing because if they don't, Buchanan said, "the media will call them names."

Three months ago, the Buchanans visited an Arizona border town and met an 82-year-old widow who lives in a self-imposed jail because of our government's failure to protect our southern border, he said. Theresa Murray sleeps with a loaded gun, in a house with bars on all the windows and razor wire along the fence outlining her property. Her guard dogs were poisoned, and her home has been burglarized 30 times.

"Why?" he asked. "Because we have a government too gutless and too cowardly to defend the border of the United States of America!"

Buchanan pledged to order the 14,000 troops "warlord president" Clinton -- who "fires missiles whenever he's in trouble with his girlfriends" -- has posted in Bosnia and Kosovo and redeploy them along the Mexican border. The crowd went wild.

After including himself among a list of the only four national figures to oppose NAFTA (Reform Party founder H. Ross Perot, the Rev. Jesse Jackson and consumer advocate/Green Party presidential candidate Ralph Nader, the others) Buchanan joked that he was at the World Trade Organization protests in Seattle last year "cleverly disguised as a sea turtle." He decried the WTO and recent discussions of a permanent international criminal court as the "embryonic" stages of what grow to be a one-world government monster.

"Dubya, he doesn't know where we're going," Buchanan said. "He doesn't have a clue. I think they had a frat party that night."

When he takes the oath of office, Buchanan promised, "when my hand goes up, the New World Order comes down!"

Again, the crowd went wild. An old man with a long, goat-like white beard stood up and yelled, "Stick 'em!"

"How about that fella for vice president?" Buchanan said, pointing at the man.

Winding down, Buchanan acknowledged the "roadblocks in the way" of his taking the oath of office. There are the old guard Reformers, who eye him warily, are disappointed with what they see as the increasing role of social issues in his campaign speeches, and think he's taking over their party to form a far-right political organization to serve his own ends.

Talking with reporters before his speech, Buchanan disputed this, pledging support for the Reform Party platform. The anti-Buchanan reaction from Reform Party founding members -- like former national party chairman Russ Verney, and former New Jersey state party chairman Ira Goodman, who resigned on the eve of Wednesday's convention -- is just "astonishment and recoil from how very dedicated our folks are. People feel outnumbered and are being overwhelmed" by his supporters at state conventions, Buchanan explained.

But even if Buchanan clears the hurdles put up by Perot allies, there's also the small matter of Gore and Bush. But, he told the crowd, "if I can get in the debates we'll have a fighting chance to get it all!"

The commission on presidential debates changed the rules on him, though, Buchanan charged. While earlier qualifying rules were less stringent, as soon as his Reform Party candidacy became reality "they held an emergency meeting" and required debaters to be scoring at least 15 percent in five polls.

These polls, he said, are conducted by "CBS, the New York Times, the Washington Post" and all the other media behemoths refusing to cover his candidacy, Buchanan said. If they didn't relent, he was not only going to sue the debate commission within the Federal Election Commission, but in federal court "and in the court of public opinion" as well, something the former CNN bloviator knows well.

If he does get to the debates, Buchanan said, he was worried about facing Gore, since the inventor of the Internet would doubtless pose a formidable challenge. Buchanan went "Ha!" The crowd answered: "Ha ha!"

Not so with Bush, he said, for whom he had a plan: Immediately before the debate began, he would approach the Texas governor and say, "Hey, Dubya, I've seen your first question. It's 'Who is the prime minister of Estonia?'" That would rattle him, he yukked, as did the adoring crowd.

After taking a couple of brief questions from his fans -- he called Sunday's assault-spree against women in Central Park "animalistic" -- Buchanan bid farewell to the crowd. Elections were held, and those on Buchanan's ballot romped over the competition: Joseph Sansone was elected state chairman, Jim Logue was selected to be state political director, Orvell Froloff was picked to be a trustee as well as District 9 delegate, and on and on, Buchanan backers all.

"It was a great speech," he said. "He's a master speech-giver. And I agree fundamentally with a lot of his ideas; it's why I'm a member of the Reform Party." But, asked repeatedly by a New Jersey reporter about Buchanan's comments about non-straight non-white non-gentiles, DiNizio added that he "still need(s) to do more research."