U.S. diplomats are wrecking the chance to bring future Saddam Husseins to justice -- all for the sake of domestic politics. 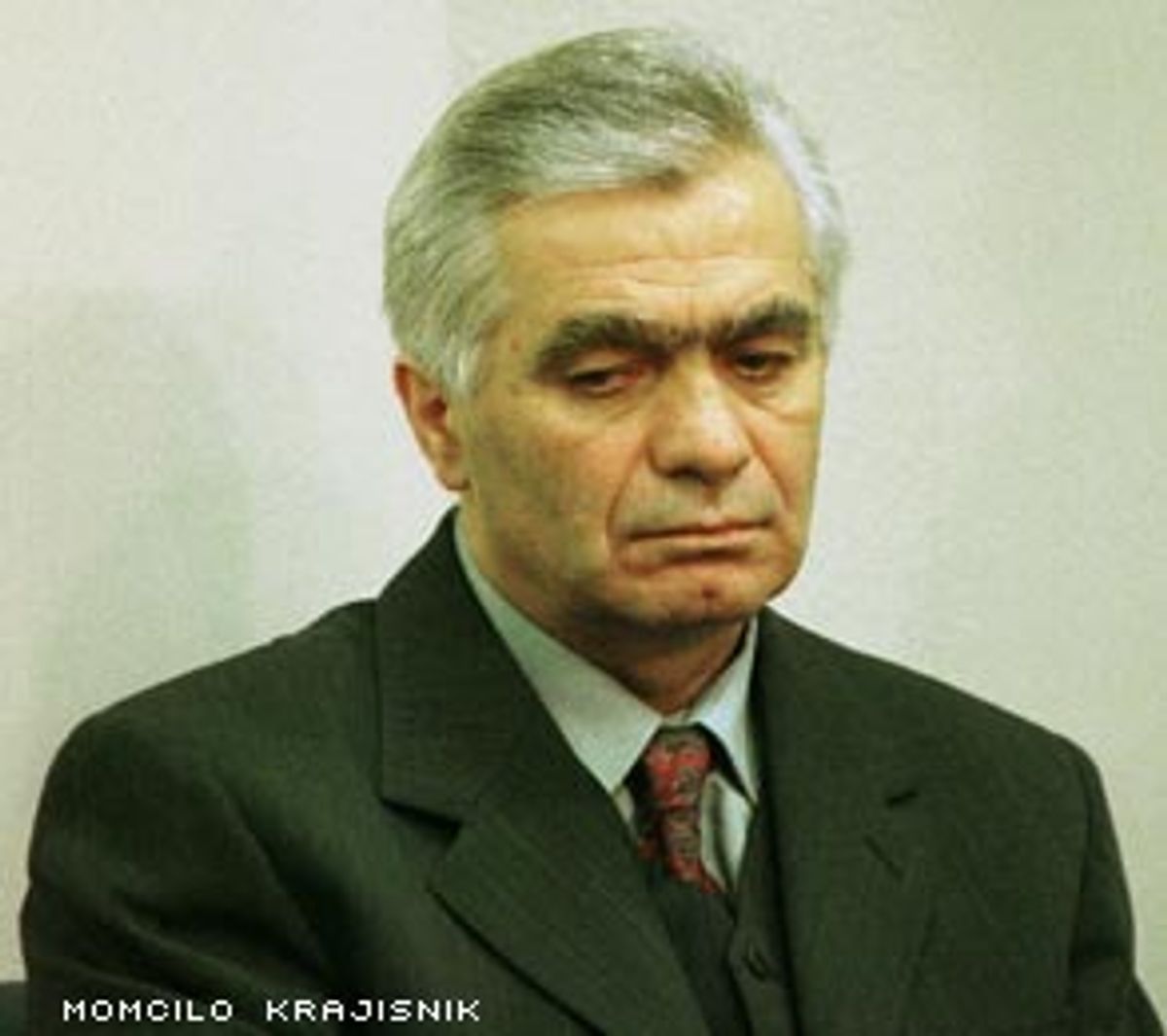 The Clinton administration is offering a "Get Out of Jail Free" card to future Saddam Husseins and Slobodan Milosevics, simply in order to pander to the Pentagon and the Republican right on Capitol Hill. American diplomats are fighting a rearguard action in New York, in tandem with Congress in Washington, to emasculate the International Criminal Court that was established by the United Nations last year in Rome.

Why does the United States oppose a way to punish the world's greatest villains? In short -- and in no uncertain terms -- congressmen such as Senate Foreign Relations Committee Chairman Jesse Helms demand that no such court have jurisdiction over potential American criminals.

U.S. efforts to impede the court's development are the latest in a series of American slaps to the United Nations, such as the refusal to pay membership dues, leaving many international observers appalled. Law professor Christopher L. Blakesley of Louisiana State University speaks for many foreign affairs specialists when he characterizes the U.S. approach to the ICC. "From the first, it has been embarrassing, pathetic and nefarious."

After years of deliberation, the vast majority of countries voted last year to establish the ICC to try those who commit crimes against humanity. So far 97 countries have signed and 12 have ratified the treaty establishing the court. There is already a "world court," the International Court of Justice, that deals with "civil" cases between countries and whose judges are appointed by the United Nations.

Running in parallel, the ICC, also based in The Hague, would be able to try individuals for crimes against humanity. It would replace ad hoc tribunals like Nuremberg and those the United Nations set up for the Balkans and Rwanda. The ICC won't have retroactive effect, so it will only be able to try future criminals, and only after 60 countries have ratified it.

For many countries and human rights activists, the court offers the real possibility that future Pinochets and Pol Pots can be brought to genuine justice. It could also break the cycle of impunity and cause would-be perpetrators to think carefully before committing the atrocities that have become such a perennial feature of world headlines.

In Rome, the U.S. delegation sought concession after concession in order to try to deliver what Helms demanded, that no American should ever stand in the dock. Their major effort was to ensure that any prosecution would have to be approved by the Security Council, which meant that the United States could veto any attempt to prosecute an American. Of course, that would also mean that Russia and China could veto prosecutions of their clients and protigis.

In the end the United States was defeated in Rome although it did manage to get many concessions. The overwhelming majority of countries adopted the statute with no provision for Security Council filtering of suspects. Meanwhile, the United States joined such paragons of international law and order as Iraq, Libya, Syria and China in the tiny minority against.

Other nations' delegations are aghast at what many frankly call the hypocrisy of the American position. After all, Congress vociferously wants international trials for prosecutions of Slobodan Milosevic and Saddam Hussein, not to mention Foday Sankoh from Sierra Leone, the leaders of Khmer Rouge from Cambodia and the Hutu genocide instigators from Rwanda -- and if they could get their hands on him, Moammar Gadhafi of Libya would certainly be dragged before the court.

So committed is the United States to the principle of trials for all that it sent an army to Panama to bring back President Manuel Noriega to put him in the dock in Miami. But there is one major exception to this principle. We can try who we like, but don't anyone try to try one of ours. For the sake of that, the U.S. delegation is prepared to let a whole rogues' gallery run loose.

This week the battle was rejoined in New York where delegations assembled at the United Nations to draft the "Rules of Procedure" for the new court. The U.S. delegation is trying to recoup its losses in Rome by amending these rules to overturn the court's founding statute. If the Americans succeed, the court could not try citizens of states that have not signed up -- unless the U.N. Security Council specifically approved those prosecutions.

Apart from the Clinton administration's deference to Helms, the Pentagon has also provoked opposition to the court. Last year, the Pentagon summoned military attachis in Washington from all over the world, lobbying them to pressure their governments not to support the court. Since the ICC is aimed at the practices of many of these military forces -- Gen. Pinochet springs to mind -- this was hardly a reassuring message to human rights organizations, which tend to think that the military should do what civilian administrations tell them, not vice versa.

Above: Momcilo Krajisnik appearing before the U.N. war crimes tribunal in The Hague. Krajisnik pleaded innocent to charges of genocide and other war crimes for the wholesale slaughter of thousands of non-Serb civilians in "ethnic cleansing" campaigns. Photograph by AP/Wide-World

Delegates are also appalled by the Helms/DeLay American Service Members Protection Act launched in Congress on Wednesday, which would deny military aid to any country that ratifies the treaty. The bill would stop U.S. personnel serving in any U.N. mission without upfront immunity from the Security Council. It even calls upon the United States to "take any means necessary and appropriate" to free U.S. or allied soldiers from ICC captivity in The Hague. Could this mean commando raids on Holland to free Central American torturers? Who knows?

Still clinging to the vestiges of what passes for diplomacy, U.S. war crimes negotiator David Scheffer pleads the U.S. case. "We have more than 200,000 soldiers overseas. We're not San Marino [a 23-square-mile nation state, the smallest member of the United Nations]," he told Salon. He rebutted comparisons with countries like Britain and France that have similar proportions of their forces abroad. "Look at the raw numbers. No one comes close to us, so it's entirely appropriate" to ask for ICC immunity.

In fact, Scheffer's position is that the amendments are necessary to cement the United States' friendliness to the court. "We would like to work towards being a party to this court, and it's not going to happen otherwise. There is zero chance of the U.S. ever ratifying the court treaty if it goes after U.S. personnel while we are a non-party. We have to deal with the pragmatic reality. We will be a non-party for a period of years -- and if you want to discuss that further, go talk to Sen. Helms. So how do we deal with it? This administration would like to help the court, so the U.S., as a non-party, has to be comfortable enough with it to do so."

Scheffer says the loophole that U.S. efforts would create is a small one. "We are talking about a very narrow hypothetical here, an American soldier in a third-party jurisdiction which the court has approached to surrender that individual to The Hague."

But that narrow hypothetical has serious practical consequences. "If it works for the U.S., it works for others unless the Security Council is prepared to go after them, and of course, that lets the permanent five and their buddies off the hook, eternally," commented Bruce Broomhall of the Lawyers Committee for Human Rights.

To stop others crowding into any loophole, the American delegation is trying to focus its attention. "There is no intent in our proposal to allow rogue states or irresponsible nations to take advantage of it," says Scheffer. But no one has come up with a satisfactory legal definition of irresponsibility. One suggestion was "any country with Security Council action recorded against it." A hasty check of Israel's record suggests that one won't be popular on Capitol Hill.

Not surprisingly, the U.S. proposal has no takers. Other delegations see no point in securing American cooperation with the court if the price is its total emasculation.

The European Union has unequivocally declared in writing that it will not tolerate any changes that are not "faithful to the letter and spirit" of the Rome statute. The E.U. recently delivered an even stronger verbal message to Washington, which it would have put in writing if it weren't for British concerns about embarrassing Tony Blair's chums Clinton and Gore in an election year.

By the time the conference finishes at the end of June, whatever happens, the United States will get a slap in the face. The most its British friends can hope to do is to lessen the force.

Some supporters of the ICC do in fact have sympathy for Scheffer, who had a distinguished record in the field before trying to interpret the ways of Clinton and Congress for a skeptical world. "It must be the toughest job in the world," says Broomhall. "The Defense Department can't really like even this fix since it means that if ever one of their guys were arrested, it lets the court go ahead, investigate and issue an arrest warrant, so there is still all the political humiliation involved in it."

Scheffer may be dealing with pragmatic political reality by pandering to congressmen in Washington. But those politicians are out of contact with any form of geopolitical reality that the rest of the world recognizes.

As Northwestern University international law professor Anthony D'Amato scathingly comments, "Our initial strategy was terrible, and our approach continues to be extremely shoddy. We have the hubris of superpower status with its accompanying ego of thinking that we know better than the rest of the world even if we don't do our homework.

"We should chalk it up to the last thrashings of the Clinton administration," he concludes. "No matter who the next president is, our legal ineptitude in international policy-making now has no downward room left."