The branding of a president 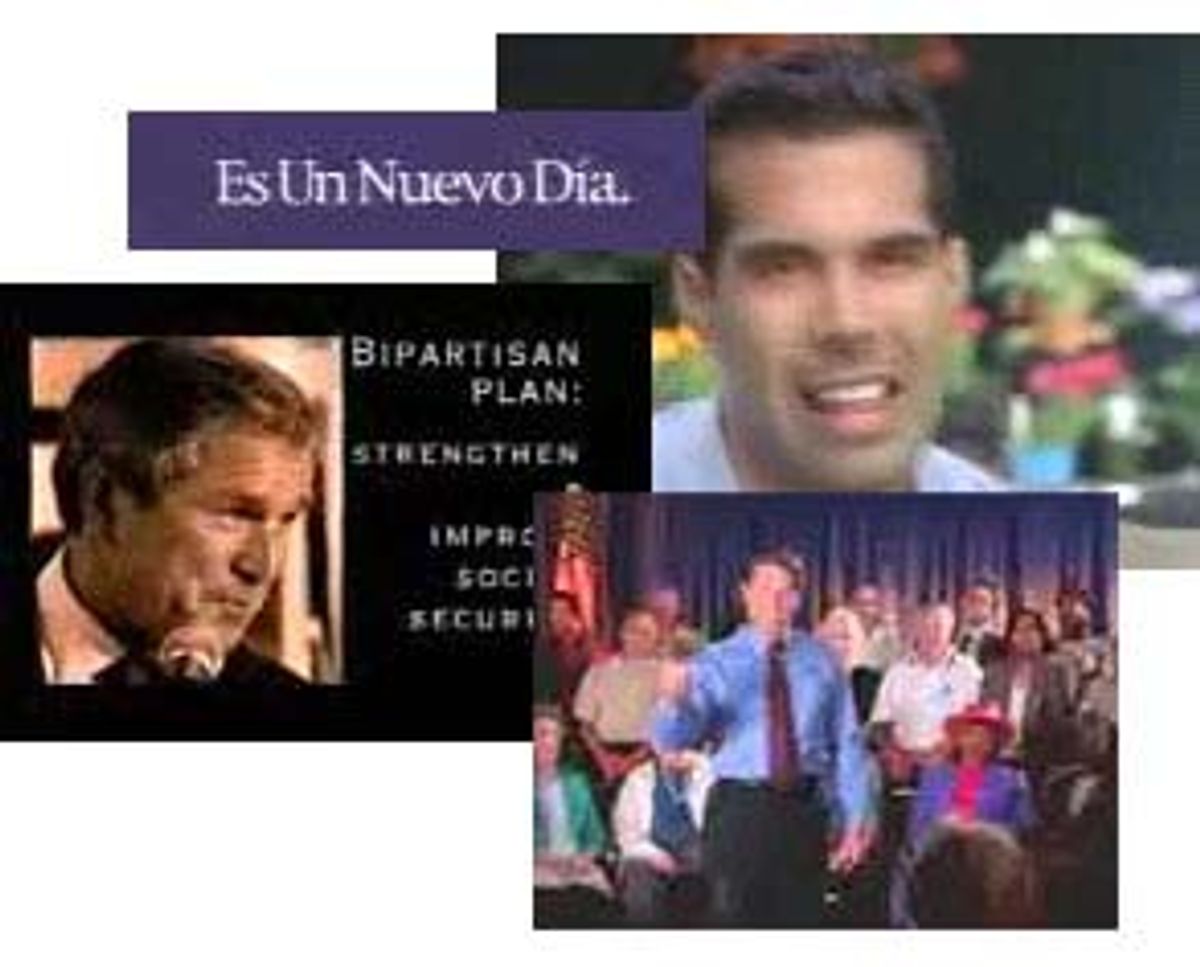 Whenever candidates need an excuse for round-the-clock fundraising, they pick on the high cost of television spots. According to the Alliance for Better Campaigns, television broadcasters have already pocketed $114 million from political ads this year. Just last week, the Democratic National Committee announced it would spend $25 million on soft-money ads for Gore and launched a spot focusing on the vice president's message about the high cost of prescription drugs. The Republicans countered with their own equally expensive ad blitz touting Bush's Social Security plan. But do the ads really work? According to some people in corporate advertising, much of the cash spent on the candidate commercials is wasted. Salon spoke to four real-life advertising executives about the shortcomings of this year's political spots.

Vinny Warren, associate creative director with DDB/Chicago, is the advertising mind behind the "Whassup" ads for Budweiser.

Jeff Musser is a creative partner with Kirshenbaum Bond & Partners in San Francisco. He worked on the advertising for the first Clinton presidential campaign.

George P. Bush "Same as Mine."

VW: This was the most impactful of all the ads I saw because it was surprising. I didn't know Bush had a Latino nephew who was also named George Bush. It seemed to speak well of the Bush family in that it jars their hard-core conservative image, but in a good way. It was also the only ad I saw with any sort of humanity. This was kind of cool in the broadest sense of the word, because it had something new. In the field of political advertising, which tends to be very one-way, either attack, attack, attack, or "I'm so great," (so "Hallmark" great) it stuck out.

NP-S: I think it's brilliant. It's simplicity. He has an enormous appeal, because he really is obviously Latin. What he's saying is so basic, and so it cuts to the heart of important issues for Latinos today -- education, a level playing field, their aspirations and dreams -- it's all why they come to the United States. It felt very genuine and sincere, and he's very personable.

JK: He has a Latino relative, so what? Maybe some people would be surprised by that, and might feel good to know there's a Hispanic in his bloodline. But it really seems like shameless pandering. You know, like, "Let's trot out the Latino cousin." And it doesn't tell you anything new. You still don't know what Bush is going to do for Latinos and it doesn't give them any reason to support him. They don't really give him anything interesting to say.

JM: The problem here is that you bury the interesting nugget at the end, the fact that he's related to George Bush -- if that really is his nephew. It's a regular ad, and then he says, "Oh, by the way, I'm George Bush." If they said that upfront, I might be paying a little more attention. But when you first see him in the ad, he's just this random Latino guy. It's done in such a tacky way -- you know, he's in the garden, that's such a clichi. And really detracts from the good things about him. It would be better if he wasn't so much a poster boy.

VW: This commercial was irritating to watch and a bit vacuous. It's like someone said, "OK, we've got George P. Bush for two days, so let's shoot something kind of cool and youth-oriented." Guess who was in charge of deciding who was cool and youth-oriented? It smacked of pandering to the youth audience, for the only time he'll pander to them in four years, probably. It was so poorly done, so cutty, that I couldn't grasp what he was saying. It seemed a bad idea. It was a really lame attempt at hipness, a real stinker.

NP-S: Although the message is still there, I felt like the going back and forth from English to Spanish, along with the other cuts, was really disruptive.

JK: They spend so much money on this shit, and I still don't know who they're talking to. There's still not a common thread, no unique idea that links the different points together.

JM: With the cuts and everything, this looks like a bunch of old guys saying, "You kids really like that MTV stuff, and so here it is. We understand you." That's really out of style. Besides, the audience knows what you're trying to do and just won't believe anything else you say. If they only did it in a different way, something that was more credible, it could be huge for the Latino community.

VW: It was just an old guy. If you're an old person, concerned about your medical bills, it's interesting maybe, but what is Gore saying? Blaming it on drug companies was a way out for him. It seemed like he was passing the buck. He basically said, "When I'm president, it'll be different." But didn't he have eight years in which to effect change on this issue? It's so cloying, and I think senior Americans are smarter than that. Visually it was awful, but so were all the rest.

NP-S: We want advertising that touches people, that uses emotion, that really evokes something. And it could be humor, it could be tears, it could be anger. And neither this one nor the Bush [Social Security] ad do that.

JK: This sucks. I hate it so. First of all, it's overdone. It's so, so sincere that it's insincere, maudlin, and you can't believe any of it. So there's this poor guy who can't afford his medication, and Al Gore's going to save the day. Then you look at the end, and you see Gore trying to do that sincere thing that Clinton was able to do, trying to make himself seem more humane. But it's never going to work for him. It just overtly tugs at your heart strings, but the story isn't sad enough, and there's nothing compelling here. It just completely blends into the landscape.

And it's so random. The question is what does he stand for, what is his brand? There's nothing that sets him apart, nothing here that makes you say, "Yes, that's it. That's real, solid Al Gore." What is it that makes him special? This ad just doesn't answer that question for me, not at all. It doesn't say anything you haven't heard before and it's boring.

JM: From the very first frame, you get that type of treatment that just announces "Here's another political ad." It also makes too many points. That's like a classic Advertising 101 mistake, where they have a whole laundry list of things they have to say, and they think it's better to make 10 different points. But at the end, you don't remember any of it.

[The RNC's original Bush/Social Security ad, "This Generation," has been re-tooled since we showed it to our panel, and it looks like the RNC got the same advice our panel had: lose the cheesy patriotic intro. It has since been cut, and the RNC released a new version of the ad late Wednesday, which can be viewed here.]

NP-S: It's just cookie-cutter political advertising. Both this and the Gore ad were just so formulaic. It's boring, like "Here's my checklist." But they do have some value. My mother-in-law, Betty Smith in Newark, New Jersey -- and I'm not making that up -- she's retired, and watching both ads, she would learn something. But I'm glad that none of these are negative. Negative ads are a sad reflection on my industry, and what we need to step down to in order to appeal to people and cut through the clutter.

JK: He bounces around and gives you too much to digest. You want to get the audience to grasp just one thought, and there's just too much stuff here. It would be better if he had just one point, and hammered it home. You come out of this saying, "George Bush is going to do something about Social Security," but you have no idea what. If you remember that at the end, then he's lucky. I kind of liked the fact that he had a book at the end, saying "This is concretely what I'm going to do." But as far as the commercial, give someone something they can take away that's going to be meaningful to them.

I think all these ads suffer from the same thing, not giving anything different or that they haven't heard a thousand times before. And the music. God, I'm sure this is the same music used in every political ad. I'd like to play the music from the Bush and the Gore ad back to back. No one could tell the difference. And the visual of the trees and flags and the sun rising ... do people really buy that shit? It's almost insulting that you're just using these standard images instead of trying to say something that separates yourself a little bit.

JM: The whole intro, I feel like I'm being set up to be manipulated. And it's a whole credibility thing. As soon as people know it's an ad, they're not going to listen to it the same way. With the imagery [the sunrise], you know right away it's either a political spot, or else it's for a Claritin ad. You know, "Breathe easy!" The setup, it's like "Here comes the sell, here comes the sell." It's so well-mined territory. The only ads that do that now are if you have an ad that starts like that and do a twist. People only pay attention to ads when they don't look like ads. It's all so obvious.

Either you have to entertain, or you have to inform. And some of these walk that line. This one and the Gore ad do talk about the issues, and that's better than trying to manipulate you with images.